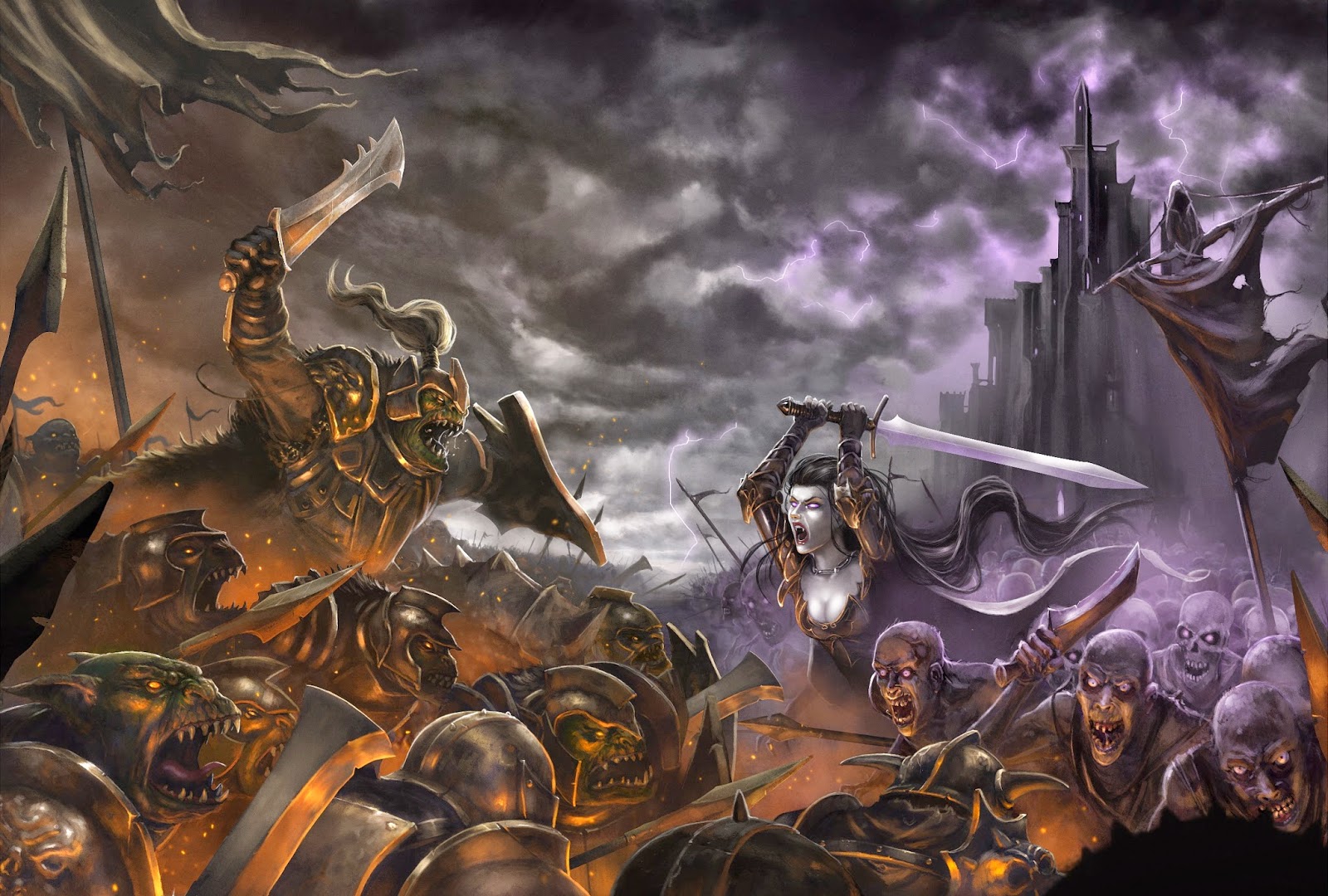 I've recently started playing Mantic Games fantasy wargame Kings of War and I have to say I am thoroughly enjoying it. My first game was at the Mantic Open Day and I've been playing around with a few of rules in a couple of mini skirmishes since. So while I may not be deemed a veteran of the game I can safely say that I have a firm enough grasp on the rules to share with you just how good the game is.

So while doing my best to avoid the 'click-bait' list articles which seem to litter the internet I present you with 5 reasons to play Kings of War.

I was thrown into my first game of Kings of War (KoW) at the deep end. I was handed a 1000pt force, an army list and a force of Ogres and told to crush the enemy. After a turn or two of guidance which laid out the base mechanics of the game I was away, playing with only little assistance being required. This is due to both the simplicity of performing actions in addition to a well written set of rules from Allessio Cavatore himself.

After speaking to Ronnie Renton (Mantic boss) about KoW one of the things which he said summed up what the game is about "It's simple, but not simplistic". I cannot agree more with this statement, while the rules are easy to learn and logical they do not skimp on depth. The core mechanics may be easy to pick up but you still have ranged weapons, spells, combat, leaders, war machines, special abilities and all those other things which make a good fantasy tabletop game.

It was refreshing to be able to play a wargame pretty quickly and without having to spend hours hunched over a rulebook or having to engage in 1v1 unit skirmishes. I was able to play a full sized game with nearly all of the rules in play that 20 minutes ago I had no understanding of.

One of the great things about Mantics range of miniatures is their price. When you've been bought up on a diet of plastic crack supplied by Games Workshop you expect all miniatures to cost the same. Well most of the time they are cheaper and Mantics KoW is no exception. You can easily pick up a decent sized force to play with for £50/$85 which includes between 50 and 100 miniatures. This can then be then be expanded on with individual units which cost in the region of £15/$25 for 20 plastic miniatures.

What's also great is that there is no rule to say you have to use Mantic miniatures in KoW. As long as its in the right scale and easy to determine what the unit is then you no one will grumble over your miniatures. For example, one player I've met has made use of Perry Miniatures plastic kits to represent their Kingdoms of Men force.

Now some of Mantics range may not look as pretty as Games Workshops and some of Plastic Resin pieces can be a little tricky to work with. But there are miniatures, such as their zombies, that are far superior to those available from other companies and are much more reasonable price as well. 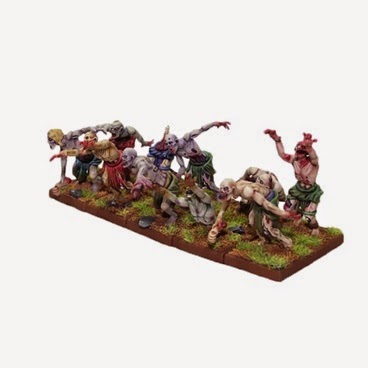 My first KoW game featured around a 1000 points worth of troops a side, which equated to roughly 5-6 units each. The game lasted 30 minutes with me learning the rules from scratch and then completely wiping out the entire enemy. Yes you read that correctly, 30 minutes to play a whole 2000pt total battle may seem preposterous especially after playing similar sized games of Warhammer Fantasy, which can take several hours. For some one with less time than they'd like to play games this is a great advantage.

This speed of play is largely attributed to how straightforward the rules and unit stat lines are. This means that once you have a grasp on the fundamentals you don't find yourself looking up rules and charts every few minutes. The fact that units are treated as a collective rather than a group on individuals also means time is saved as miniatures are not removed as casualties and as a result, a whole unit can be deployed on a single base.

The downside of KoWs speed of play it that it has had to refrain from going as in depth as WH: Fantasy does, which for some players is a big thing. But these omissions aren't really integral for having a challenging and fun game and only include things such as a smaller available pool of spells, fewer options for customization, leadership and wounds have been combined e.t.c But ultimately, if you are like me and tire of time wasting rule-book checks or quarreling over interpretations of rules then KoW is a real breath of fresh air. 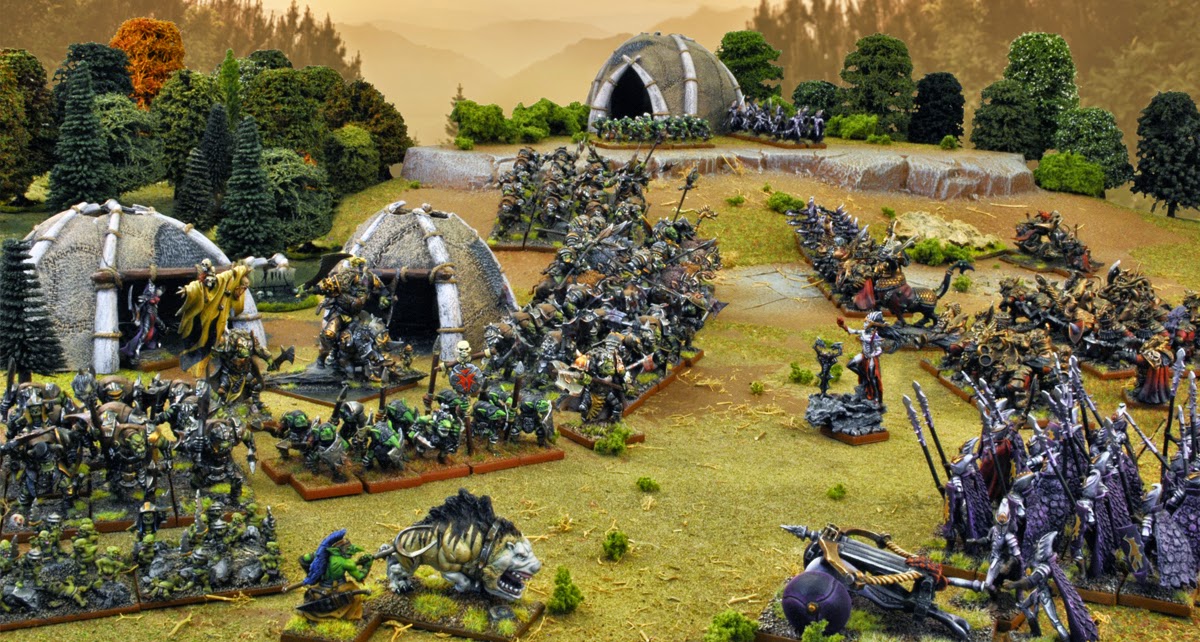 Mantic Games as a company are great. They do not sit in their ivory tower, detached from the people who play their games. They are their in the forums, at events, on social media and even hosting open days all to engage with players like us. They are open to suggestions and want to hear how you play their games. This community engagement is seen in the work on the an upcoming 2nd Edition of KoW which will feature improvements and tweaks suggested by the players of the game. Which brings us to my final point...

As you may recall from our previous articles, KoW will be receiving a 2nd Edition rule set next year which was funded by a Kickstarter Project. Along with the new rules is not only adding new units and miniatures to the existing races but also an entirely new one, the Abyssal Forces.

This makes it a great opportunity to pick up a force and learn the core rules ready for when the 2nd Edition and the new units hit next year. In fact you don't even need to fork out on a rulebook to try it out as Mantic have published a mini rulebook for free on their Website.

From this list I have omitted how fun the game is, as that is more subjective than factual. But I have had a great amount of enjoyment from the games I have played so far. What my favorite thing about Kings of War is that you're are playing against your opponent and not their rule book. For some this might seem like dumbing down but for me its trimming the fat, I want to concentrate on strategy rather than trying to memorize whats in the rule book.

If you're looking for a quick game that's easy to get into and fun to play then I highly recommend Kings of War. It's a fantastic game for both veteran wargamers and new players a like. If you enjoyed our first bit of KoW coverage be sure to check back regularly as we will no doubt be revisting this excellent game again in not too distant future. To finish here my first Kings of War miniature, Grokagamok. 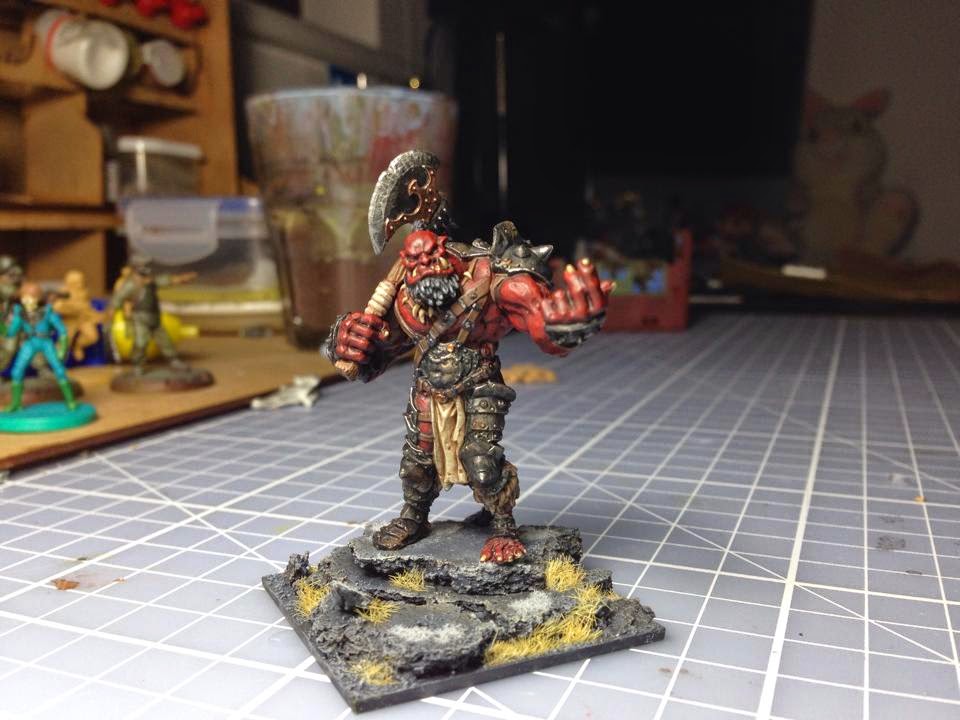