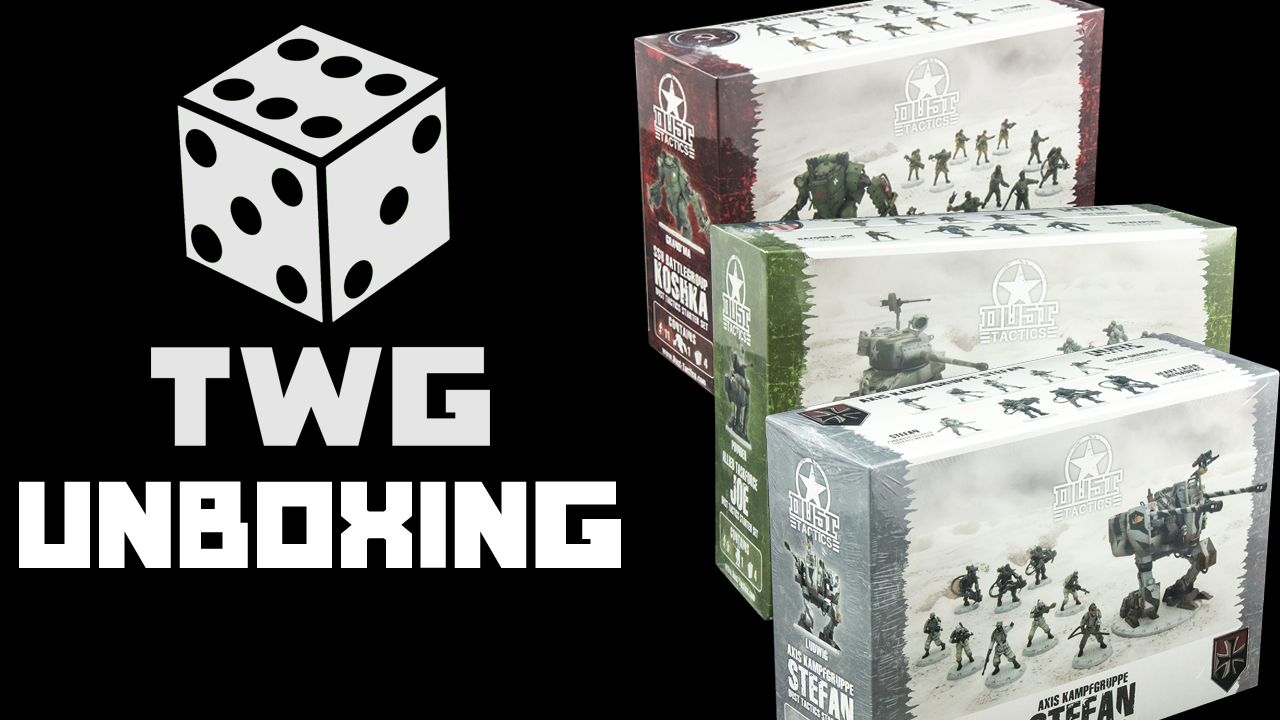 WW2 is an extremely popular period of history for wargaming, from historic to sci-fi, 15mm to 28mm, there are many games available. One of these is Dust, set in an alternate history where a crashed alien ship enabled great advancements in technology and where the war didn't end in 1947. The game consists of squads of infantry being led by heroes and fighting alongside walking tanks, zombies and even gorillas... with guns. In this unboxing I will take a look at the 3 starter sets available for Dust, one for each of the main factions in the game. These three starter sets are Kampfgruppe Stefan for the Axis forces, Battlegroup Koshka for the SSU (Soviets) and finally Taskforce Joe for the Allied faction.

Now before I go any further allow me to clarify the difference between Dust Tactics and Dust Battlefields. Both are essentially the same game, played with the same miniatures with the same stat lines and similar rules. However, the difference comes in where they are played. Dust Tactics is played out on a grid, not too dissimilar to Deadzone, which is used to determine the core mechanics of the game such as movement, ranged weapons, cover e.t.c. Dust Battlefields on the other hand is played in much the same way as games such as Warhammer or Bolt Action. Where movement is defined by a tape measure rather than grid system. The rules for Dust Battlefields can be found in the Dust rulebook and is not detailed in the starter sets. Now that I have cleared that up, lets get back to the unboxing.

Each of the starter sets contain everything that you need to get playing Dust Tactics as well as a small starting force for a particular faction. The full color 44 page rulebook gives you all of the information that you need to play Dust Tactics as well as some background on the world on Dust. What is nice about the rulebook is that all of the mechanics are presented with an example and a diagram to illustrate which makes learning the rules much easier. Unlike other systems, where the individual unit rules / stats are presented in a separate rule book, Dust makes use of cards to detail what your miniatures can do. One interesting feature of these cards is the ability to write on them with a dry-wipe marker, allowing you to easily check of limited use weapons or vehicle hit points. 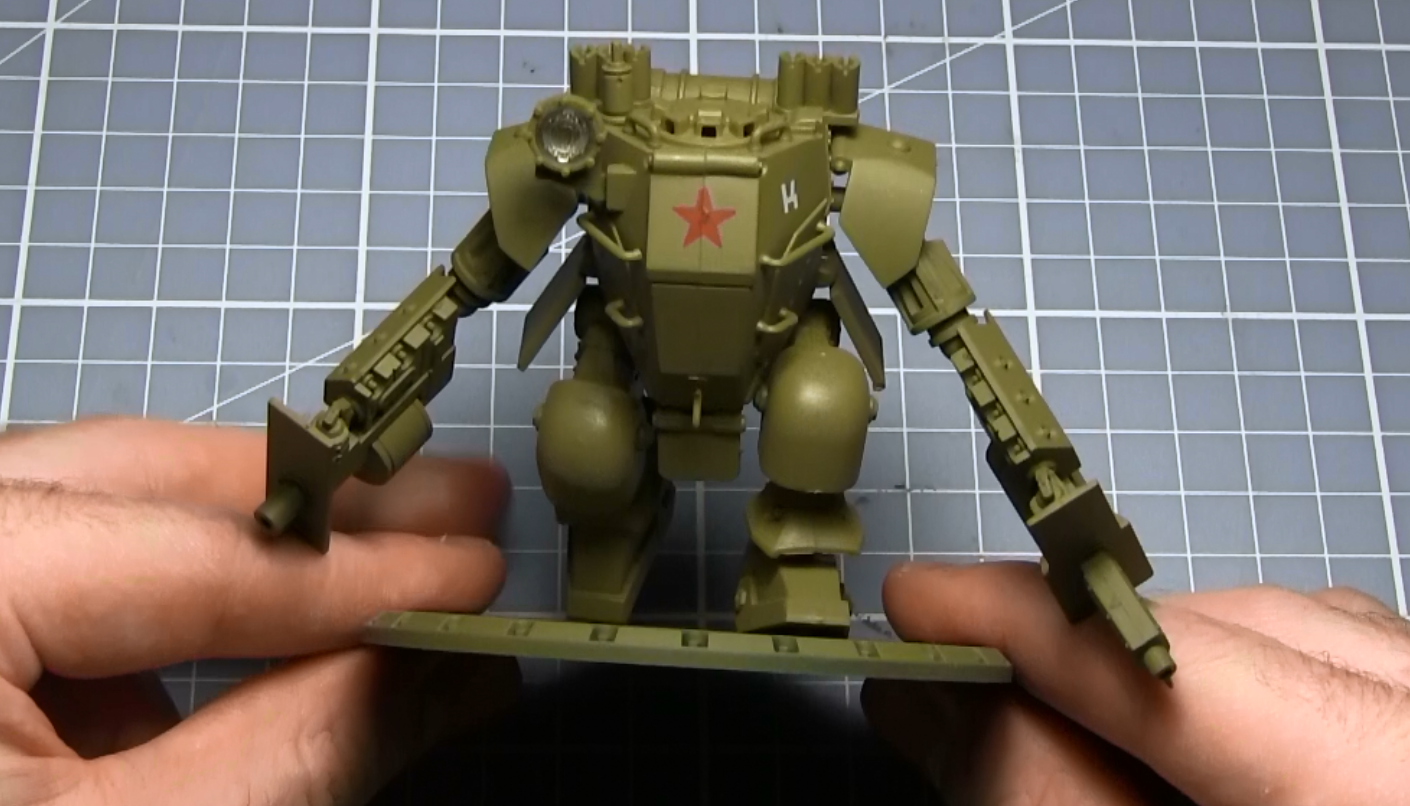 Also included is a fold out game mat featuring the grid required to play Dust Tactics. The mat is double sided and features both buildings and open spaces, it is only printed on a poster like material however which means that it may deteriorate after prolonged use. To accompany the rulebook and the gaming mat there are also a selection of card tiles which can be used to represent terrain features
or objectives. In addition to the card terrain tiles there is also a 3D plastic tank trap included in each of the starter sets. Finally, for the gaming materials, we get 12 'Dust' dice specifically themed for the army of their owning starter set. For example, the SSU starter set features red dice with yellow markings. The dice are not your typical numeric dice and feature symbols such as shields, targets and a faction icons.

So with the peripherals out the way it's on to the best part, the miniatures. Each of the starter sets contains a similar composition of miniatures, these is a Hero/Character, 2 infantry squads and a vehicle all of which are cast in plastic. The miniatures are unique to their faction and are sculpted in a 28mm true scale as opposed to the heroic proportions seen in games such as 40k.

What is most notable is that all of the miniatures come already assembled and primed. This may be surprise to you if you are used to sprues and having to glue your models before game play, but if you are familiar with games such as X-Wing it should be familiar to you. Although they are pre-built there is some articulation available, for example some of the infantry can be rotated about the waist or there heads can be completely removed.

As a way of getting into Dust these starter sets are fantastic. They contain everything you need to get you playing and the rulebook has been designed to easily accommodate new players. Simply get a friend to pick up a second starter set and you can get to playing Dust straight away without having to fork out for extra peripherals. One of the factors which contribute to this quick set up is the pre-assembled miniatures which I see these as a bit of a double edged sword. On the one hand, there are those who will appreciate not having to build an army before they can play, especially those new to wargaming. But if, like me, you enjoy the model making side of things you may be a little disappointed to find that your clippers and plastic glue are not required. While you may not be able to build your miniatures you can still paint them, this is made especially easy by the fact the models come pre-primed as well.

Aesthetically the miniatures are very pleasing, there style is quite firmly WW2 era but with a hint of sci-fi. The design of the miniatures has also captured certain traits inherent to the factions of Dust. For example, the SSU walker Grand'Ma is simplistic in its design with practicality and ease of construction being the objective. This reminds me of the Soviet T34 tank which also followed these goals. The quality of the miniatures is good, while not quite on par with some of current miniatures from Games Workshop but they are well detailed. You will have to remove a few mold lines, which is an inevitably part of the model making but it is nothing to extreme. There were few issues with some of the miniatures where weapons had been bent slightly out of shape, whilst it was an inconvenience it was too much of an issue to rectify.

Overall I most certainly recommend these starter sets to any one looking to get into Dust. Not only are the miniatures a good springboard in which to expand your force on but the gaming materials provided make it extremely easy to start playing. The miniatures look great and whilst you do loose out on the option to assemble your own models, those of you who are used to limited pose metal regiments won't be too phased by it.

If you would like to hear more about Dust be sure to check back as I will be reviewing the gameplay of Dust Tactics very soon.
By Unknown