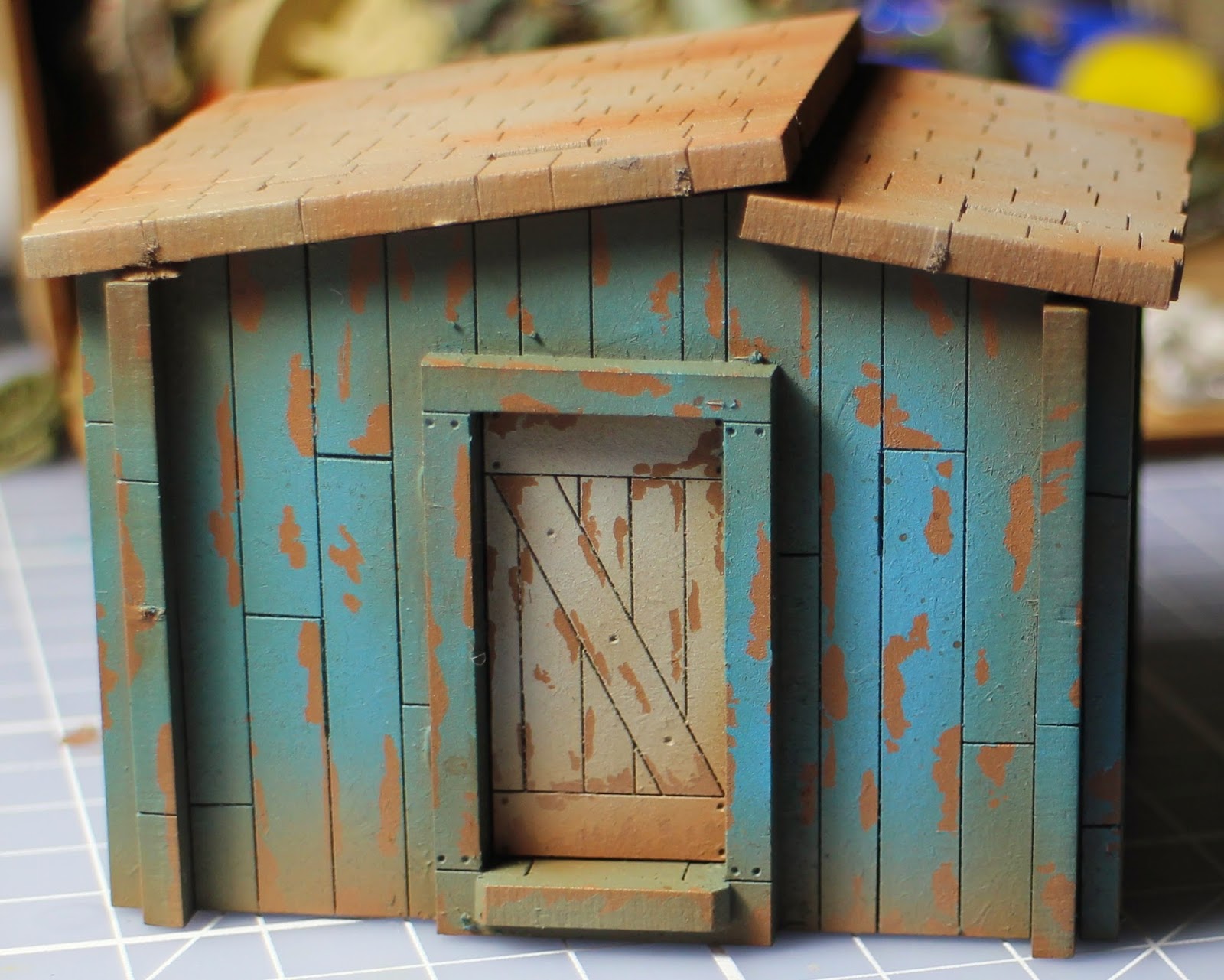 You've got to love laser cut MDF terrain, its cheap, easy to assemble, widely available and, most importantly, looks great. Well the terrain available for the Wolsung 28mm skirmish game is no exception. We at Talk Wargaming have had the good fortune of getting our hands on some of Wolsungs new scenery which will soon be available as part of their recent Kickstarter. After a weekend of cutting, building and painting we have some rather superb scenery to share with you:

The XIX Century Shantytown kit comes in two sheets of 3mm MDF along with a single sheet or paper which features the assembly instructions on the reverse. From this kit there are enough parts to allow you to assemble four shanty houses of varying sizes; two large, one medium and one small. 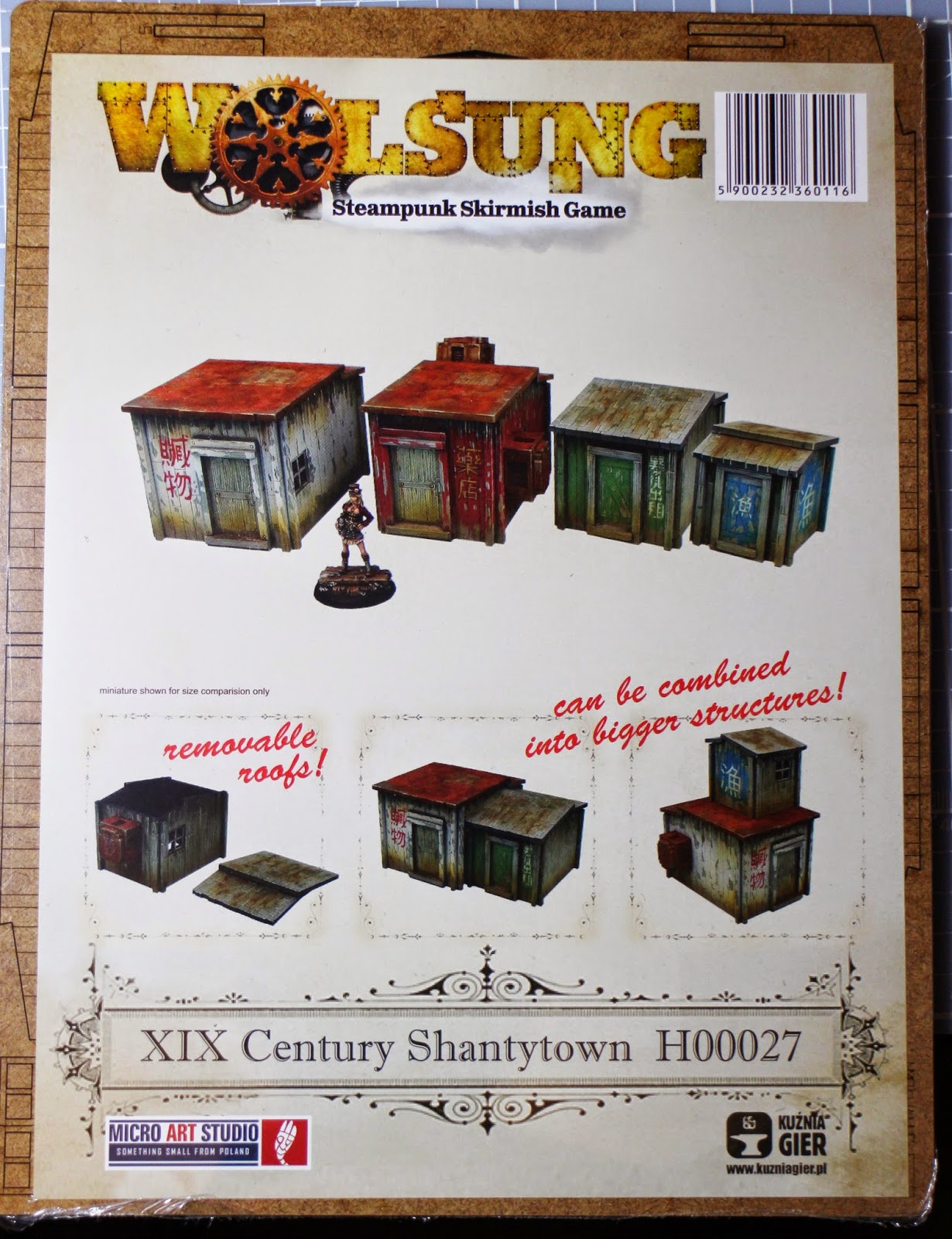 The first task when assembling the buildings was to pop them out of the MDF sheet. This wasn't too difficult as most of the joins had been completely cut with only a few small tabs holding it to the frame. Some of the smaller pieces proved a little trickier but with the aid of a cutting mat and a hobby knife they soon came out.

With the pieces removed the next task was to decide how to construct the house. Each house came with two panels where a door could be placed as well as at least one panel where a window or air conditioner could be added. Once I had decided upon my configuration it was a simple matter of pushing out the sections where the door would be placed. As before, these had already been pre-cut which made life easier.

Once I had all of the pieces I needed, the next task was to remove the remnants of the tabs that held them to the sheet. This could be done by using either a file or a hobby knife and due to the fibrous quality of woods interior this was quickly completed. 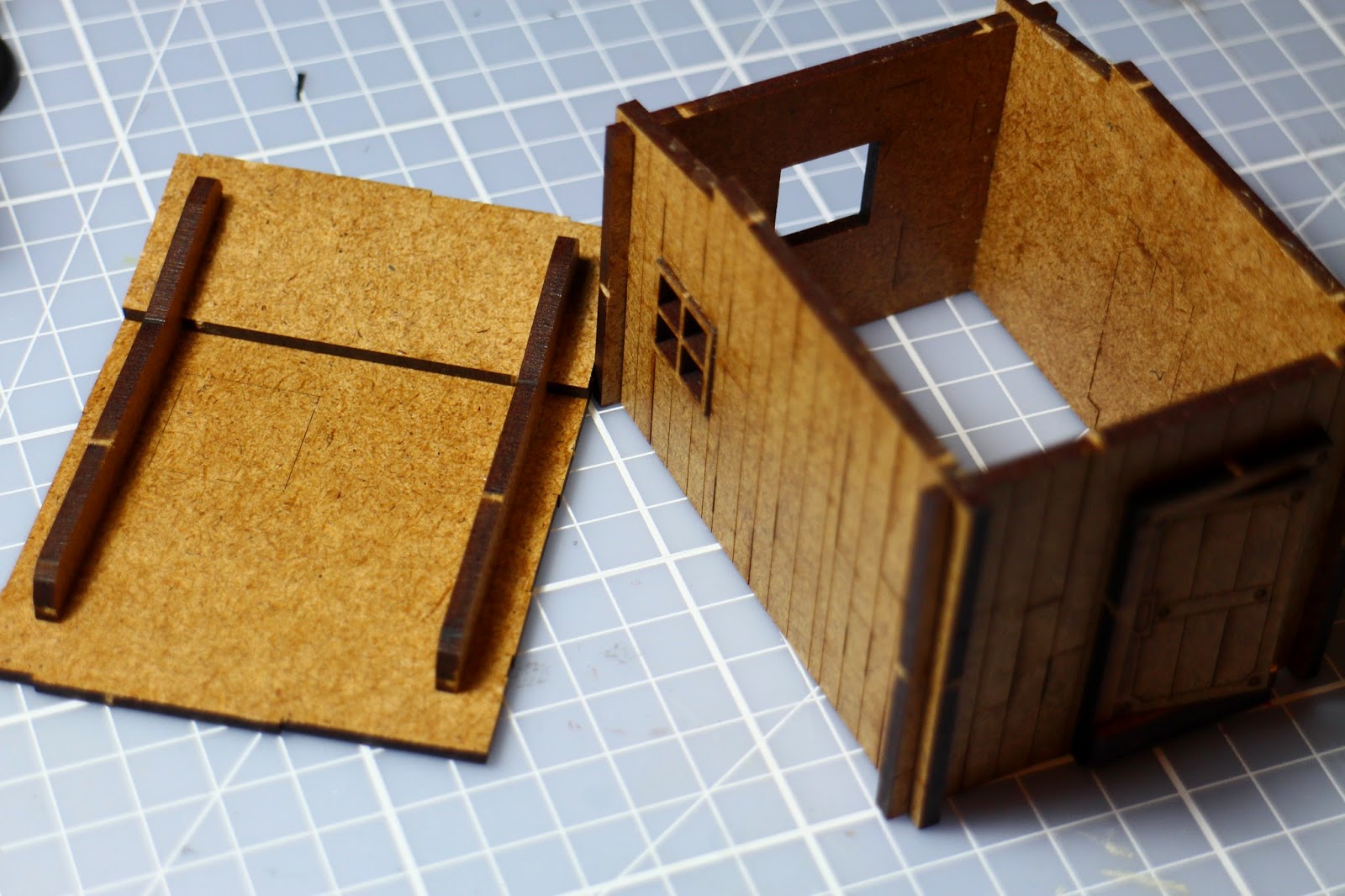 With the preparation completed it was finally time to assemble to house. This was straight forward and self explanatory but the clear instructions on the sheet were good for reference. The side panels slotted together easily and the join was snug enough for them to remain together without glue. The roof was similarly easy to assemble, consisting of two roof sections attached to two beams. Once the roof and the main structure was assembled they could be easily removed and replaced, perfect if you wanted a detailed interior.

The 3mm MDF was nice and sturdy but not too difficult to work with. I have used thinner MDF pieces in the past and they did bend and warp slightly, however the material in the Shantytown kit was free from this annoyance. The precision of the laser cut was also impressive, panels slotted together perfectly with hardly any no gaps between the joins and the wood paneling detail work looked great. 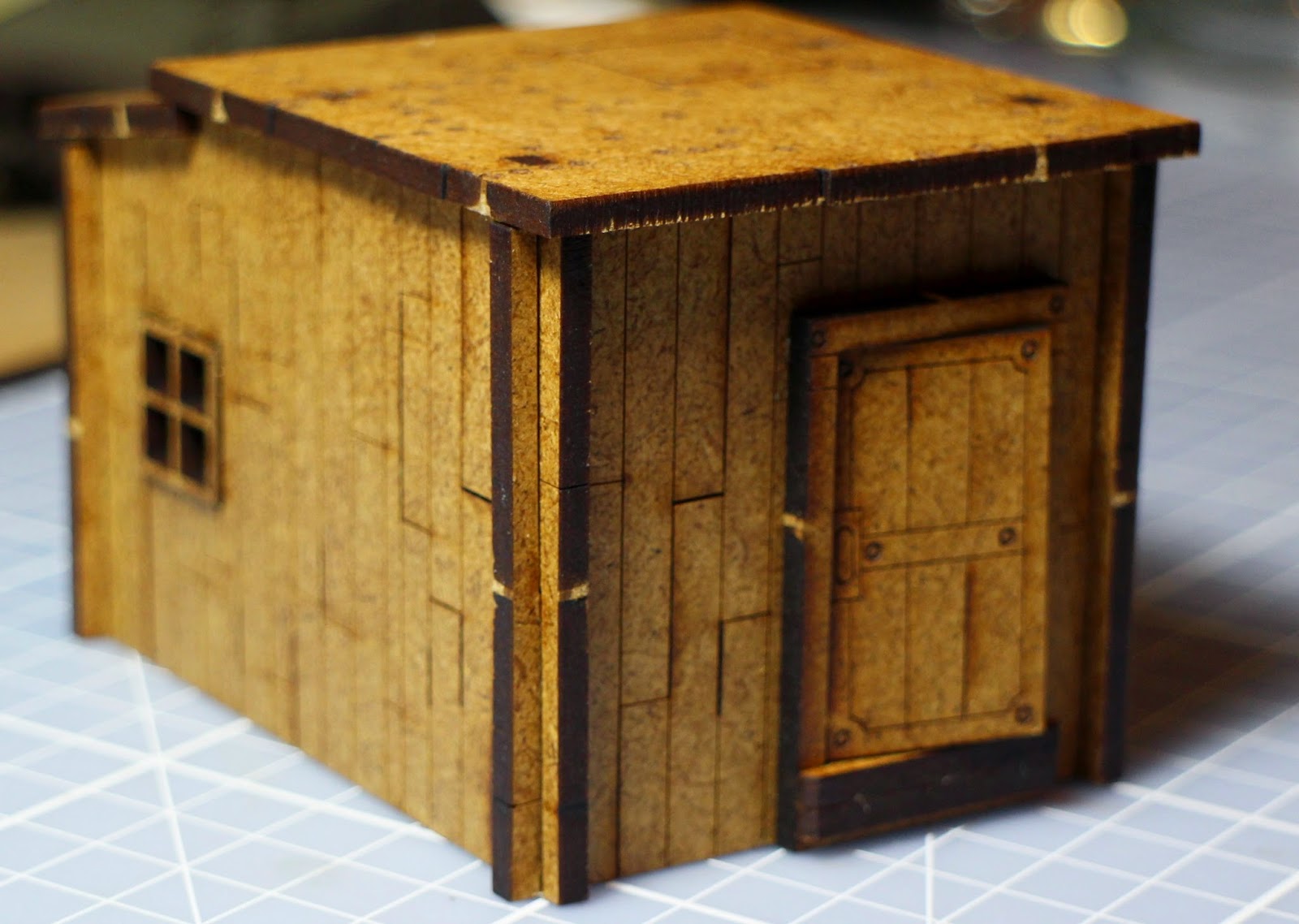 Painting the shacks required no special preparation, I was able to airbrush my acrylic paints straight on to the MDF surface. The paint held well and didn't require many coats to achieve a nice even finish. The wood paneling details, that I mentioned earlier, still showed through the paint meaning that the final product didn't just look like a flat boring surface. With some shading and weathering I was able to achieve a believable looking shantytown shack. I really cant stress how easy these kits were to build, paint and be ready for the table. I get the impression that a lot of thought went into making sure that these kits were not only simple but also looked good when finished. It's quite easy for MDF terrain to look quite plain compared to plastic or resin constructs, but the XIX Century Shantytown manages to avoid this.

It would have been nice if they had more of a modular aspect to them, allowing you to build more complex structures rather than just four walls. But with a bit of imagination and conversion I can see how this could be achieved.  In terms of its aesthetics, the Shantytown avoids any specific themes making it perfect for use in other Victorian era games (such as Empire of the Dead) or even Fantasy games (such as Warhammer and Kings of War).

To summarize, if you're after some good looking 28mm terrain that you can build without hassle then the Wolsung Shantytown kit is definitely something to pick up. As the buildings can have a variation of door/window placement and can also be stacked you can build an interesting and varied shanty town. They are aesthetically pleasing and are reasonably priced at roughly £13/$20/€17, allowing you to build a full Shantytown without breaking the bank. To be kept up to date with when these become available, head over to the Micro Art Studo Website.