I absolutely love anything to do with Zombies and wargaming is no exception. However I was always left disappointed by their lack of coverage in the GW systems (the Fantasy zombies just look outdated). So you can imagine my delight at hearing the news that Mantic would be unleashing Zombies into their Deadzone universe. So after finally getting my hands on some Plague Zombies I got to work assembling and painting them.

The Plague Zombies box contains 20 plastic zombies constructed from 4 sprues. Each sprue allows you to construct 5 zombies with a range of different options available. The kit contains parts to make both civilian scientists and soldiers. In addition to the sprues you also receive 20 round bases and 1 Mantic point. 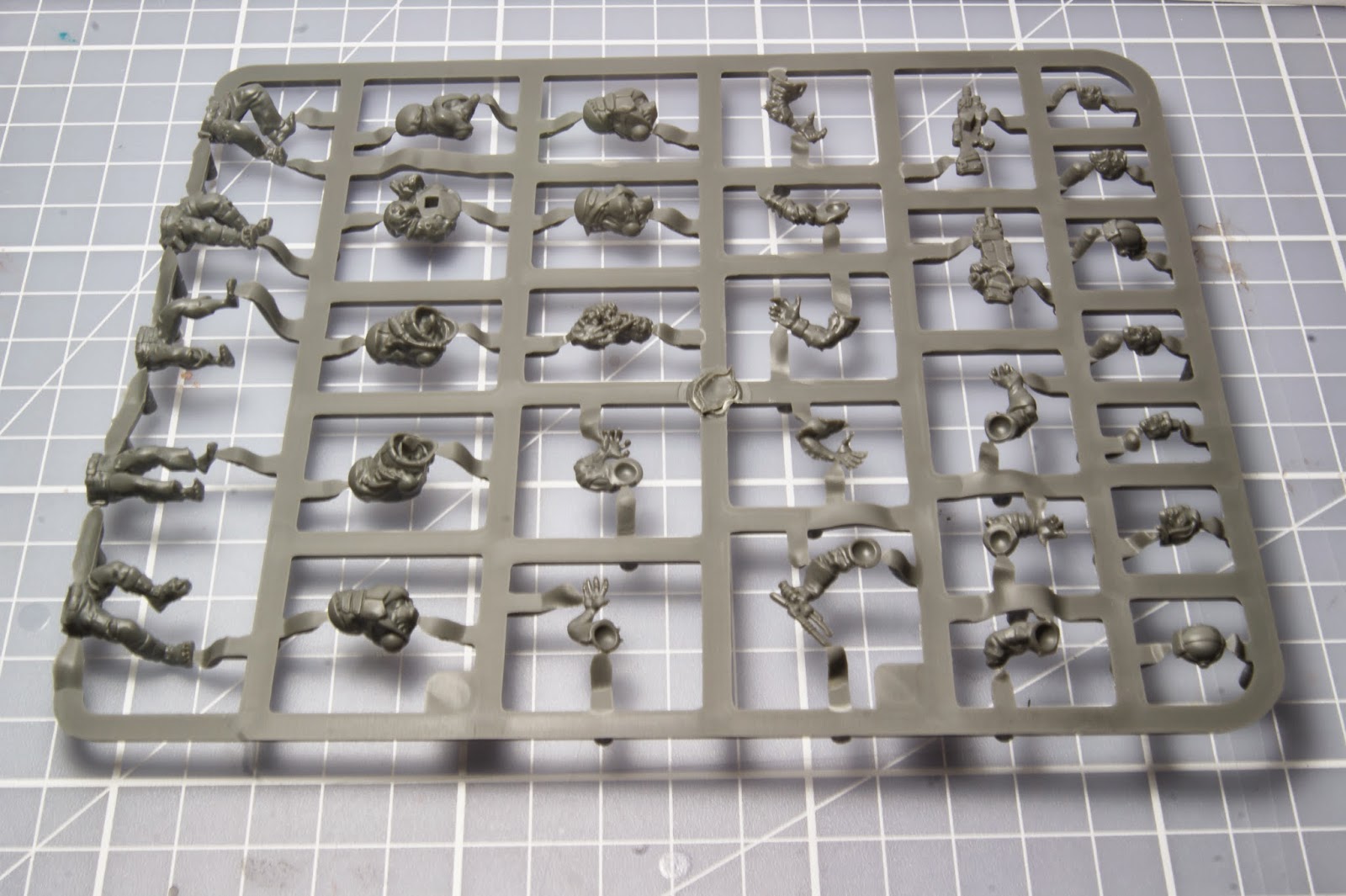 The zombies come in 5/6 parts; Head/Helmet, 2 Arms, Torso and Legs with both the scientist and soldier parts being interchangeable. The waists and shoulders are ball jointed which gives you a lot of freedom when posing them. These ball joints also allow for kit bashing with parts from Mantics Kings of War Ghoul and Zombie kits.

The miniatures were relatively quick to assemble, there were a few mold lines but these were easy enough to remove with a file. Assembling the parts was also simple as the joints helped in holding the pieces in place whilst waiting for the glue to set. 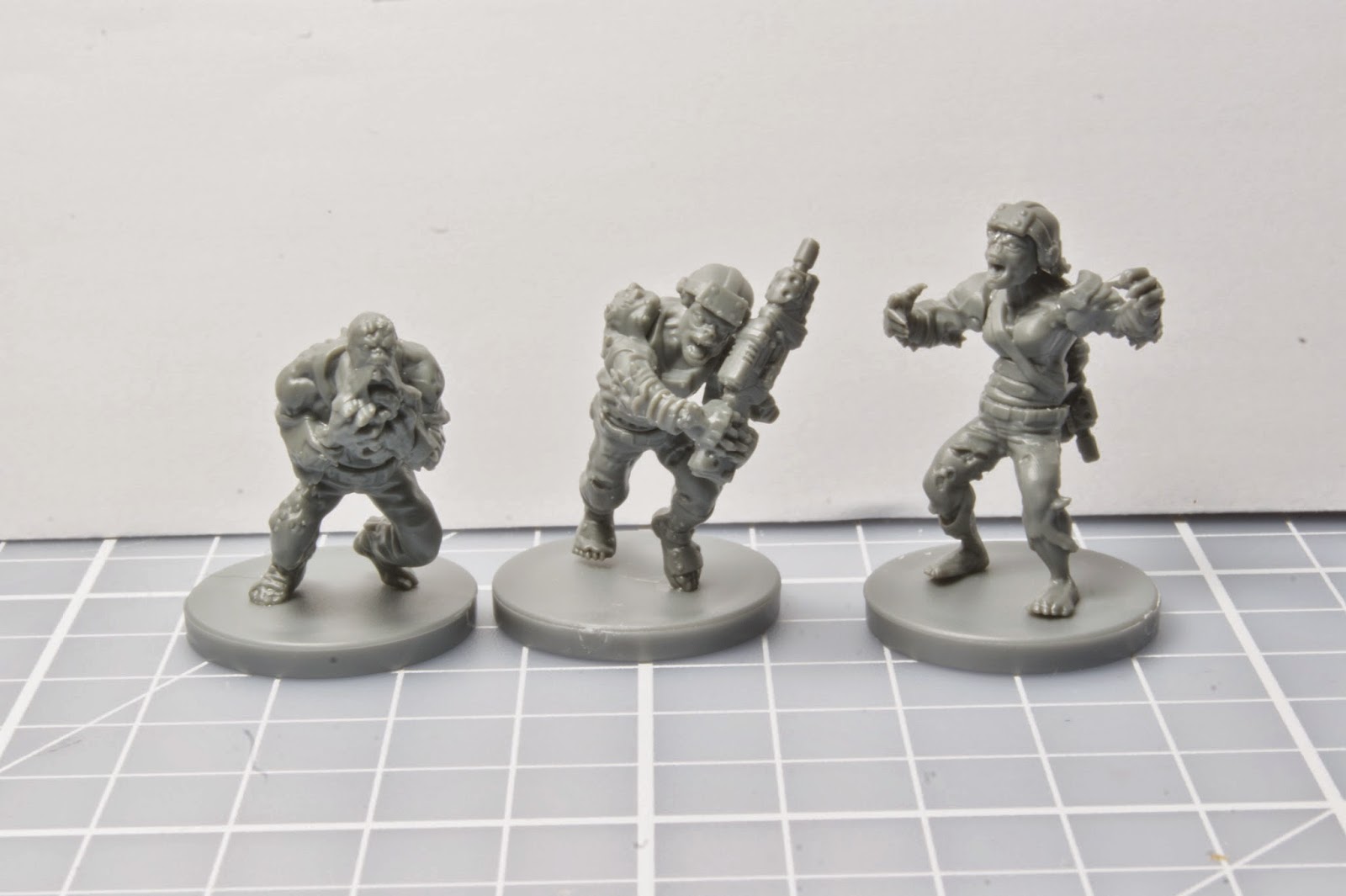 As mentioned before, the kit allows you to build both civilian scientists and soldiers. Fans of War Path may notice that the soldier zombies are equipped in much the same way as the Corportation Marines. The scientists on the other hand are wearing the remnants of what appear to be hazmat suits, which obviously weren't very effective.

Mantic have come on leaps and bounds in terms of their plastic kits over the last few years and the Plague Zombies are testament to that. The miniatures look great, their twisted poses and grasping hands portray the typical zombie perfectly. The detailing on the miniatures is also fantastic, boney spines burst through torn clothing and faces twist in relentless hunger.

If you think the miniatures looked good as bare plastic, wait until you paint them. The great thing about Zombies is that you don't have to be too neat as details tend to be lost in the crowd. Combined with the fact that these miniatures aren't over cluttered means that you'll have your hoard painted up in no time. Quick Tip: Be sure to make use of washes, it is a really quick and easy way of bringing out the subtle details whilst simultaneously dirtying up your Zombies.

I will be posting tutorials on how I painted both the scientist and the soldier so be sure to check back for those. 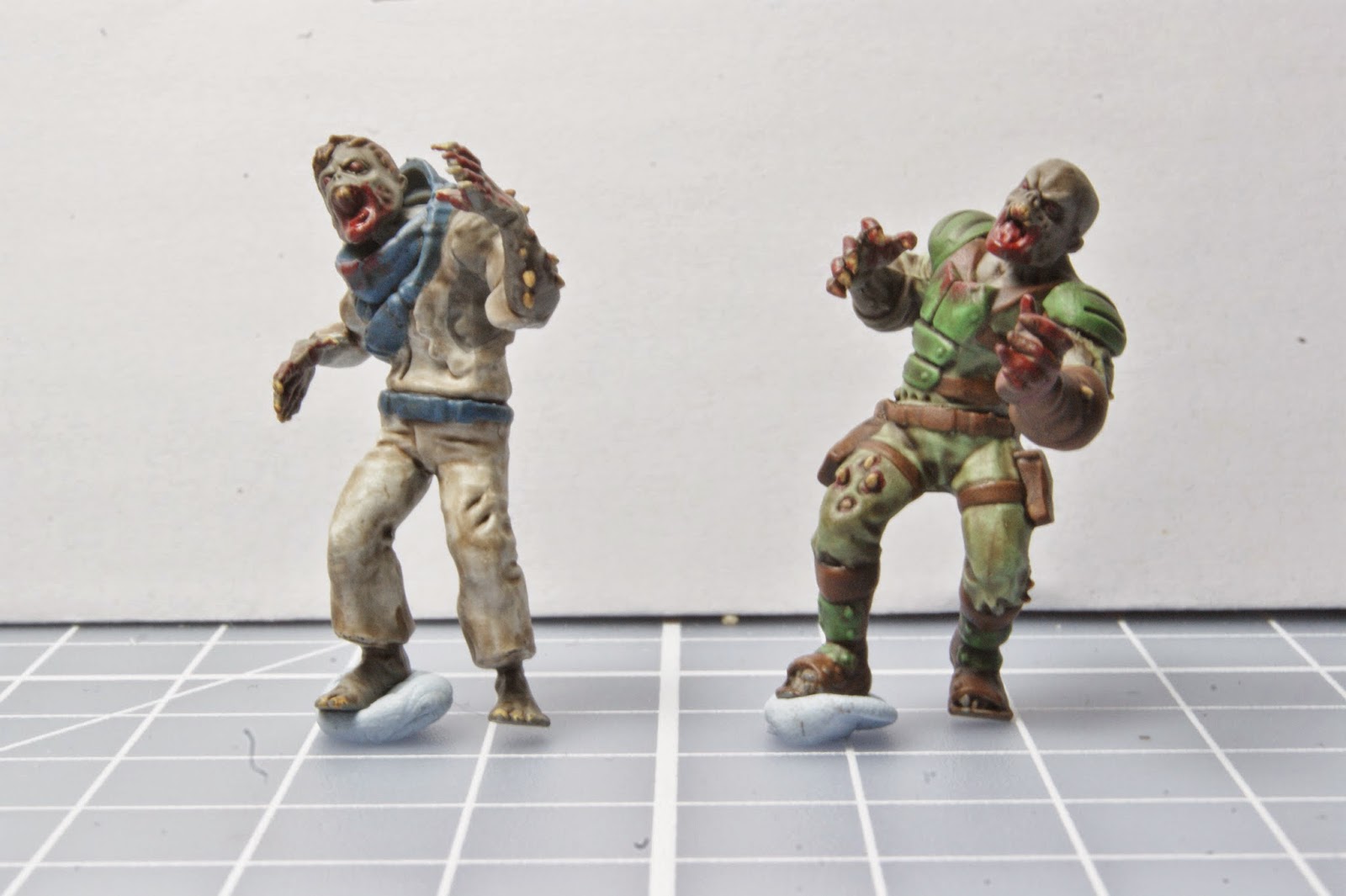 If like me you're a big fan of the shambling undead then you should definitely pick up some of these Plague Zombies. At £14.99/$24.99/€17.99 for 20 zombies you cannot grumble at the price either, you can quite easily build yourself a large horde without spending a fortune.

Whats also great about this kit is that, being similar in scale to GW humans, the Plague Zombies wouldn't look out of place next to your 40k forces. While it would have been nice to have a few more options on the sprue I can't complain about variation I have been able to achieve. Mixing the set with other kits will also improve the variety.

If you would like to get your very own Plague Zombies head over to Mantics Online Store.