You may remember Kromlech from one of our previous reviews, we covered the resin miniature manufacturers Ork Clankers. Well we are back to review some more of their extensive range, this time we will be looking at their Afrika Korps Orcs and Orc Juggernaught.

Kromlechs range of miniatures and conversion parts are in 28mm heroic scale. They are definitely inspired by Games Workshops miniatures and work excellently with them. Whilst all of the parts covered in this article can be easily used with your GW Orks, we will be covering some of Kromlechs miniatures range.


Kromlech have a great range of historical themed Orcs, these include a range of WW2 Orcs including the infamous Afrika Korps. These Orcs are kitted out in desert fatigues which include shorts. There is something rather unsettling about an Orc in shorts, but it definitely fits in the traditional green skin humor. The WW2 themes continues across the to weaponry with the Orcs firearms resembling the MP40 used by German troops. 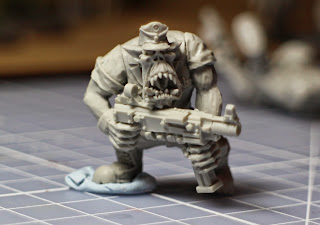 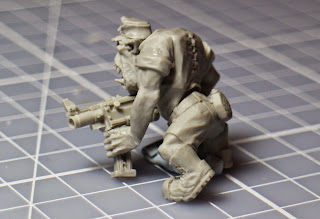 Providing some heavy, if not somewhat inaccurate, support to the squad is the HMG gunner. His weapon of choice is the MG42 inspired machine gun which comes with options for either a drum or box magazine. My favorite part of this miniature is his crazed expression, no doubt from the sheer joy of firing such a loud weapon. 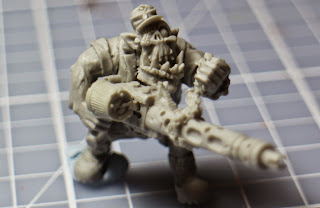 To lead this ragtag bunch is the Orc Officer. Resplendent in his peaked cap and iron jaw the Officer brings a fearsome power claw to the fight. In addition to his close combat weapon he is also armed with a luger like pistol. 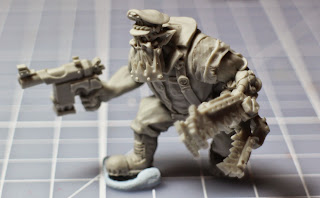 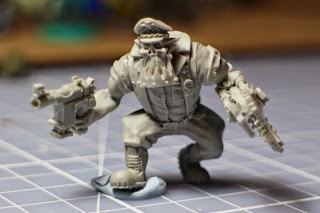 What I like about these guys is that even though they are dressed in more of a uniform than their 40k cousins they still retain their 'Orkiness'. Their shirts are ill fitting and bursting at the buttons, their weapons look cobbled together and their facial expressions are ones of childish glee at the thought of getting into a good scrap. The detailing on these miniatures is particularly nice with nice crisp lines and small things such as laces and buttons being picked out.

Big, cobbled together and wielding some heavy weaponry the Orc Juggernaut Mecha Armor embodies everything an Orc dreams of. The huge suit of powered armor is constructed from mismatching parts, sprawling bundles of cables and huge slabs of metal. Standing taller and more imposing than the 40k Ork Mega Armor, the Juggernaut would make an excellent Warboss. 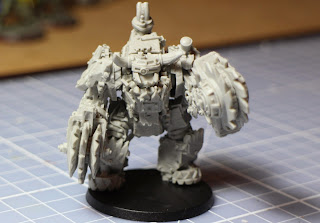 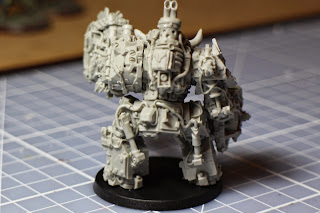 The Kromlech Juggernaut comes in a range of varieties with different weapon options available. ranging from HMGs to cruel looking buzz saws. In addition to this their is also the choice of bare heads, fitted with crude cybernetics, or fully enclosed helmets. It's strange to say it but Kromlechs take on the ridiculously heavy armor is just more 'Orky' than the 40k equivalent. The scrap built feel to it is much more in line with the rest of the Ork forces. The GW Mega Armored Nobz just seem a little bit too clean cut.

From what I have seen so far, Kromlechs Orcs really are fantastic. They resemble the 40k Orks close enough to sit along side them in your force whilst being unique enough to draw the eye. The fact that they are cast in resin allows for some phenomenal levels of detailing to achieved, this is especially prevalent in the Ork Juggernaught. As you can see form the images, loose cables and wires sprawl across the Mecha armor, Kromlechs range of miniatures really give Forge World a run for their money.

I was also impressed by the high standard of casting. There was very little in the way of mold lines and flashing to deal with and there was no sign of bubbling, unlike the Fine-cast range. As we have to come to expect with resin miniatures, they are more expensive than their plastic counterparts. Whilst it's not unreasonable considering the quality you get, it will get costly to field a full force of this guys.
If you would like to get your hands on these fine specimens of Orcmanship then head over to Kromlechs webstore to see their full range.