You may remember one of our Previous Articles where introduced you to the tabletop game Norsgard. Currently being funded on Kickstarter, Norsgard is a 32mm fantasy skirmish game set in a land of permanent winter. Well we at Talk Wargaming have been lucky enough to get our hands on a couple of the miniatures which will be available for the game. A Dark Guard of the Scarlet Watch and a Warchief of the Howling Horde. 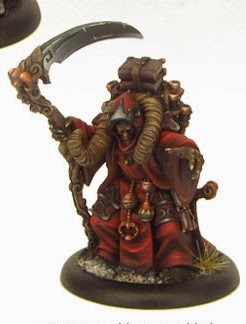 Before we look at the miniature let me give you a little background on the Scarlet Watch. Originally known as the Order of the Ram, before a number of their members turned to necromancy, the Orc paladins now patrol the cold lonely highways to guard against barbarian hordes. The Scarlet Watch are led by warrior mages known as the Dark Guard.

The Dark Guard miniature is draped in heavy robes with small of plates of intricately detailed armor visible. Symbolising his membership to the Order of the Ram is the large curved horn around his neck which gives the miniature a shamanistic look. The Dark Guard carries all manner of trinkets and baubles about his person including a small library's worth of books and scrolls strapped to his back, no doubt detailing the many spells known to him. In addition to his magic, the warrior mage is equipped with a large and formidable looking scythe adorned with swirling horn like details and a ram skull. The ram iconography continues to the hilt of his sword which is slung beneath his cloak. 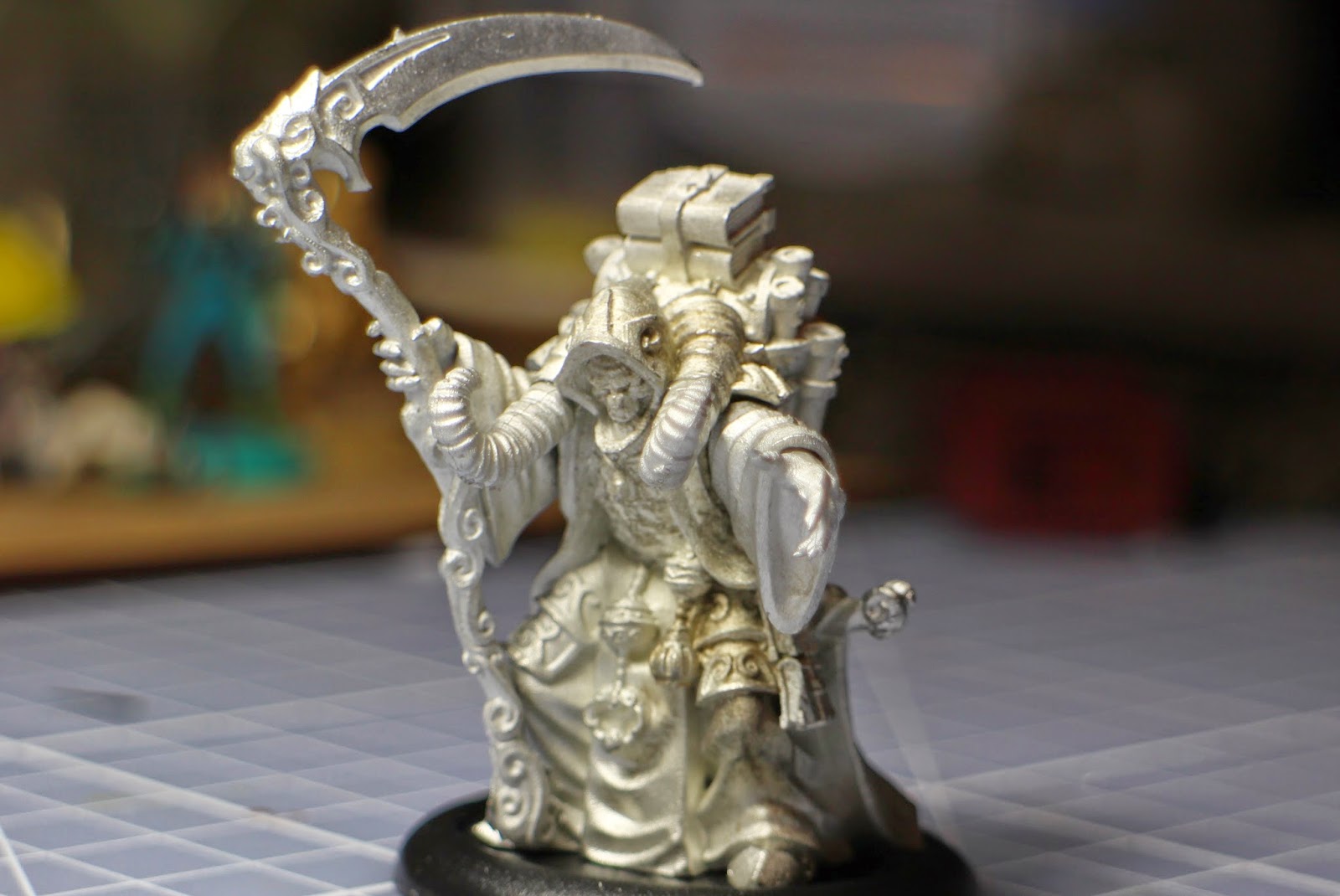 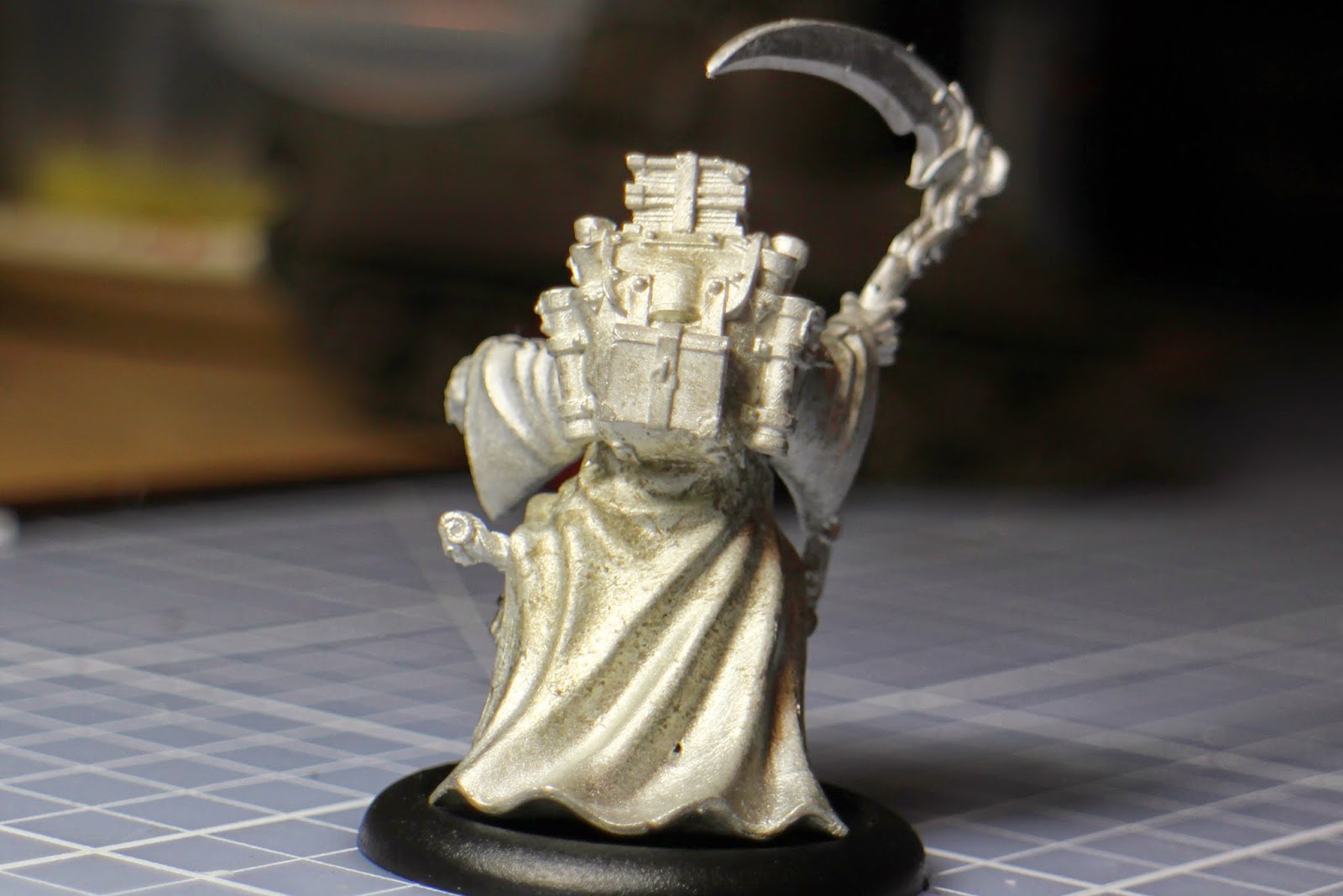 The Dark Guard consists of 7 parts with the hands, arms, and horns being separate from the main body piece. The miniature is pretty weighty as well which is understandable considering it's size and its metal cast. Assembly wasn't too much of a problem, any half decent super glue will have no trouble holding this miniature together. Gluing is also made that much easier by the tabs and holes which guided and supported the arms and horns as the glue dried. 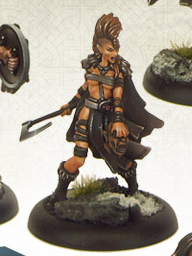 The Howling Horde is the largest of the Tribes of Mork who scrape a living in the icy north. Although numerous, their penchant for violence has always prevented them from rallying under a single leader. Unfortunately for the free peoples, with the rise of the Demons they have been given a new purpose. Leading these barbarians are the Warchiefs, one of which is the miniature that we will be looking at.

Dressed in furs and wielding axes the Howling Hordes miniatures are your archetypal barbarian and the Warchief is no exception. Rather than opting for a typical muscle clad leader of the clan, The Howling Hordes has chosen (or rather been beaten into submission before choosing) a lithe yet tough looking female to lead them. Her hardiness is made apparent in the skimpiness of her clothing despite the chilly temperatures of Isbran's perpetual winter. Wielding an axe in one hand the recently decapitated head of an Orc in the other her combat prowess in obvious. But by far her most striking feature is her mohawk which signifies her as both a barbarian and a formidable warrior. 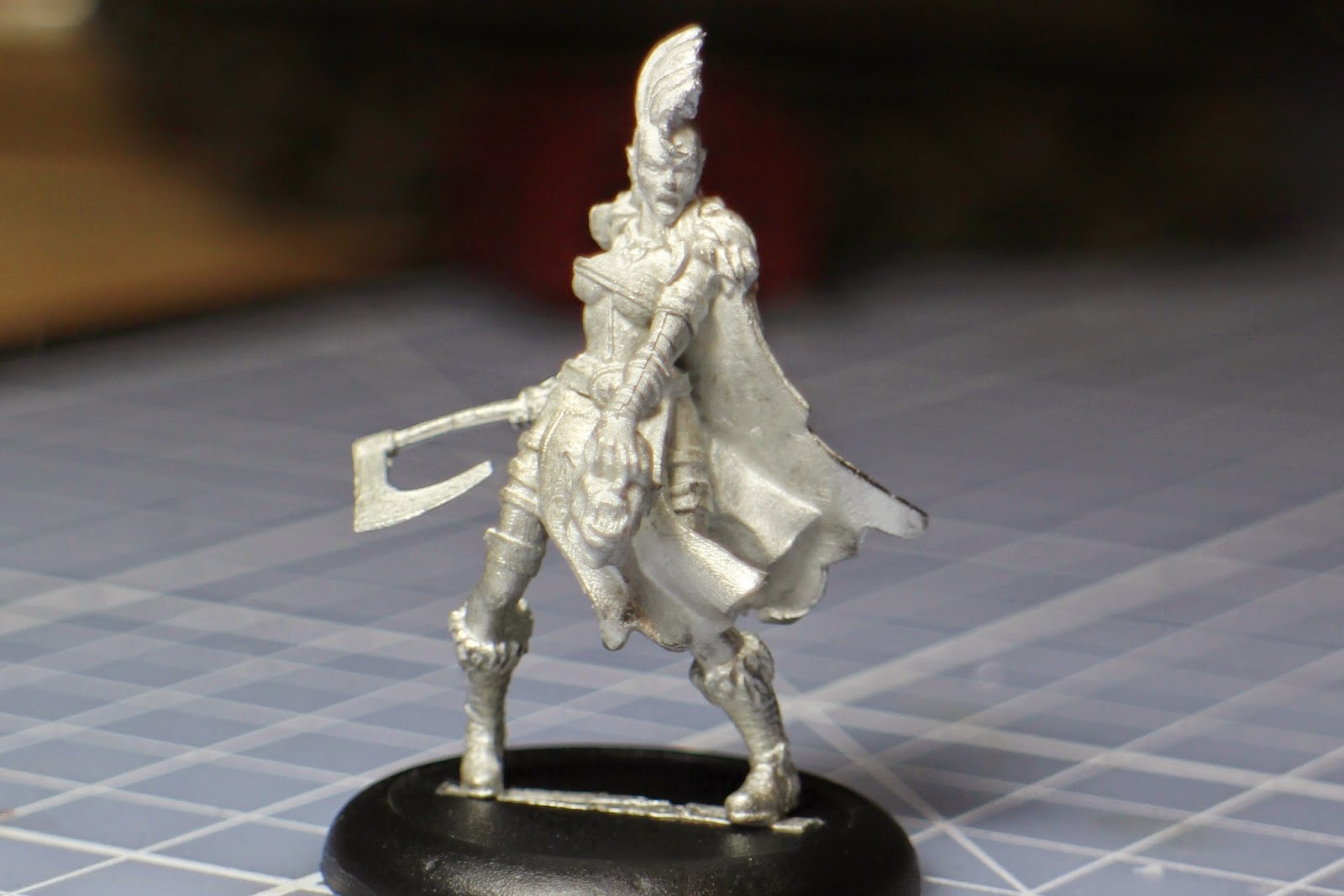 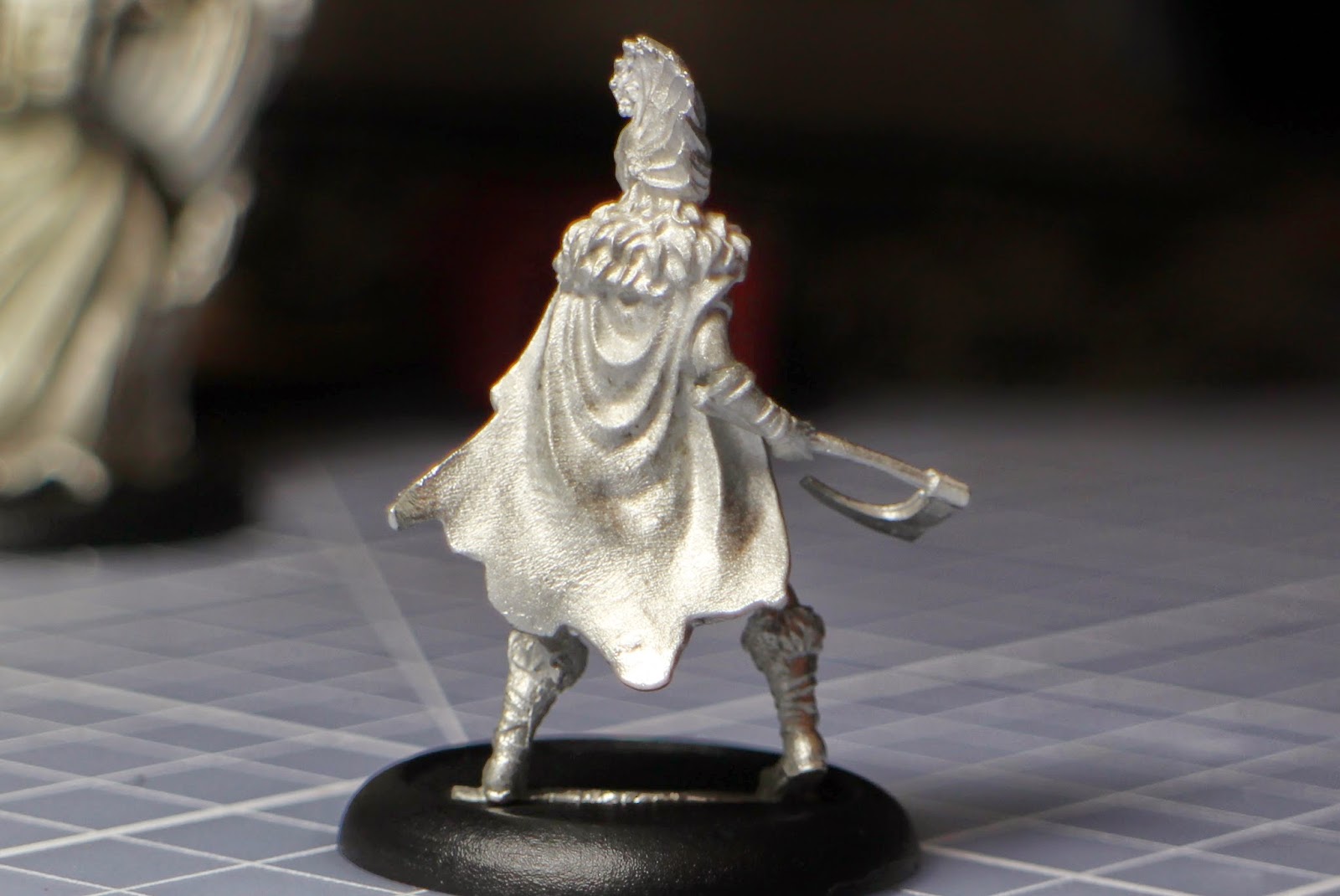 The Warchief is much smaller than the Dark Guard, being closer in scale to other 32mm humans. She consists of three parts; her two arms and the rest of her body. Whilst they were a little more fiddly to piece together than the larger limbs of the Orc, the slight ball and socket joints made bonding that much easier.

You can find a scale comparison below with a miniature from 32mm Malifaux and a Chaos Space Marine. 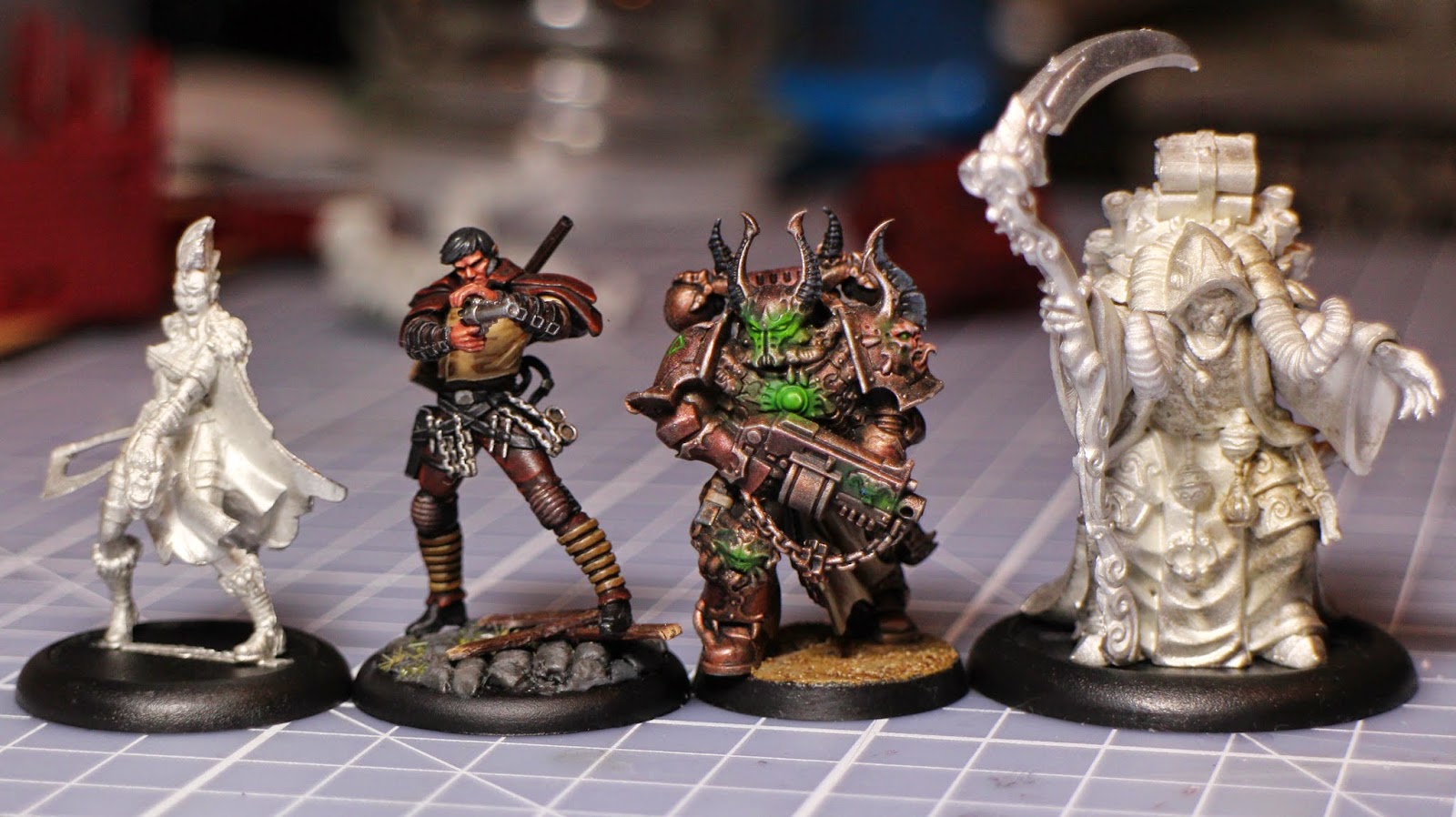 While I have only had the chance the look at a couple of the miniatures available, if the rest of the range is the same as these then Norsgard is definitely a game worth backing. Quality wise you can't complain, the metal casting has allowed for fine details to be achieved and at the same time manages to avoid the problems that plague resin miniatures. While assembly can sometimes prove fiddly with metal miniatures the small tabs and sockets sculpted into the pieces makes things a little less tricky.

Whilst the Howling Horde are not necessarily the most original in terms of the their design I really like Norsgards Scarlet Watch. It's interesting to see a tabletop wargames take on the fantasy Orc in that doesn't just paint them as simple minded and aggressive but rather defines them as being what are essentially the 'good guys'.

If you are a a fan of 32mm skirmish game miniatures, such as those seen in Malifaux, then the Norsgard is some you should take a look at. As mentioned earlier it is currently working its way through the Stretch Goals and you can contribute by heading over to their Kickstarter page HERE. If you are interested in reading up on the rules ahead of time you can also find an early yet functional draft of them HERE.

The next stretch target for Norsgard is the Orc Heavy Cavalary which will be unlocked at $27,000. While the cavalry doesn't yet have any miniatures or 3D renders the concept art looks pretty awesome. It should be noted that the cavalry will not have any associated rules and will be more of a display piece. It is after all a small skirmish game and cavalry don't really fit the theme. 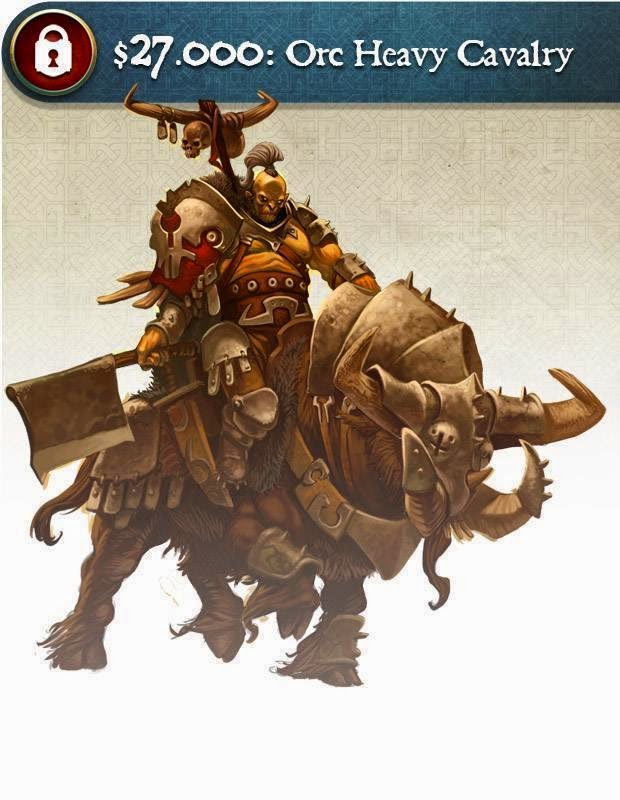