The Fallen Frontiers Reboot that is currently on Kickstarter is performing extremely well and is smashing its way through its stretch goals. You may have seen our coverage of the upcoming game in several of our recent articles, if however you have not allow me to explain what the game is. Fallen Frontiers is a 35mm sci-fi wargame set in a futuristic society where humans have colonized much of the galaxy and have found powerful energy resources and intelligent life forms with advanced technology. The players assume control of a faction that can be customized by choosing troops, characters, and cards that best adapt to their game style.

We at Talk Wargaming have been very fortunate in getting our hands on one of the miniatures that will be released with the game and in this article we will be taking a closer look.


The model in question is a member of the Riffs faction. The Riffs are an ancient race, much older than humans, whos civilization has risen, evolved and then fallen due to unchecked ambition.This particular miniature is a Riffs Berserker a fearsome looking creature who prefers to get up close and personal with its opponents. 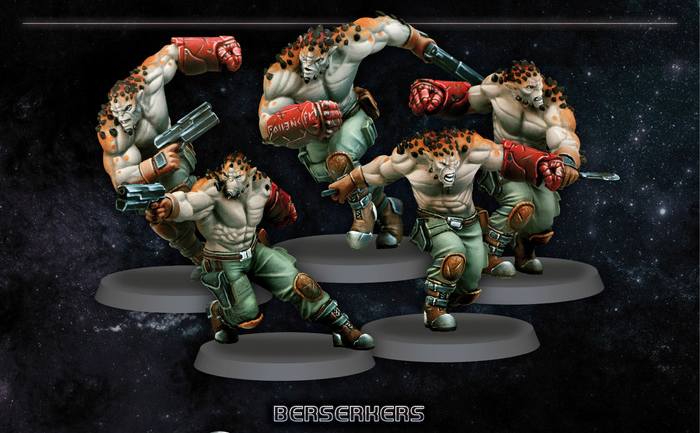 The Berserker looks fantastically ferocious with his aggressive stance and spines which run across his head and down his back. His well toned muscles and lack of shirt clearly indicate that this beast is spoiling for a fight. Equipment wise the Berserker is somewhat lacking, his combat trousers feature multiple pouches but in terms of weapons he relies on the more close range options. The serrated knife in one hands pales in comparison to the huge hell boy like gauntlet in the other the other. In fact with the anabolic steroid physique and his huge fist I'd am half tempted to paint this guy red.. 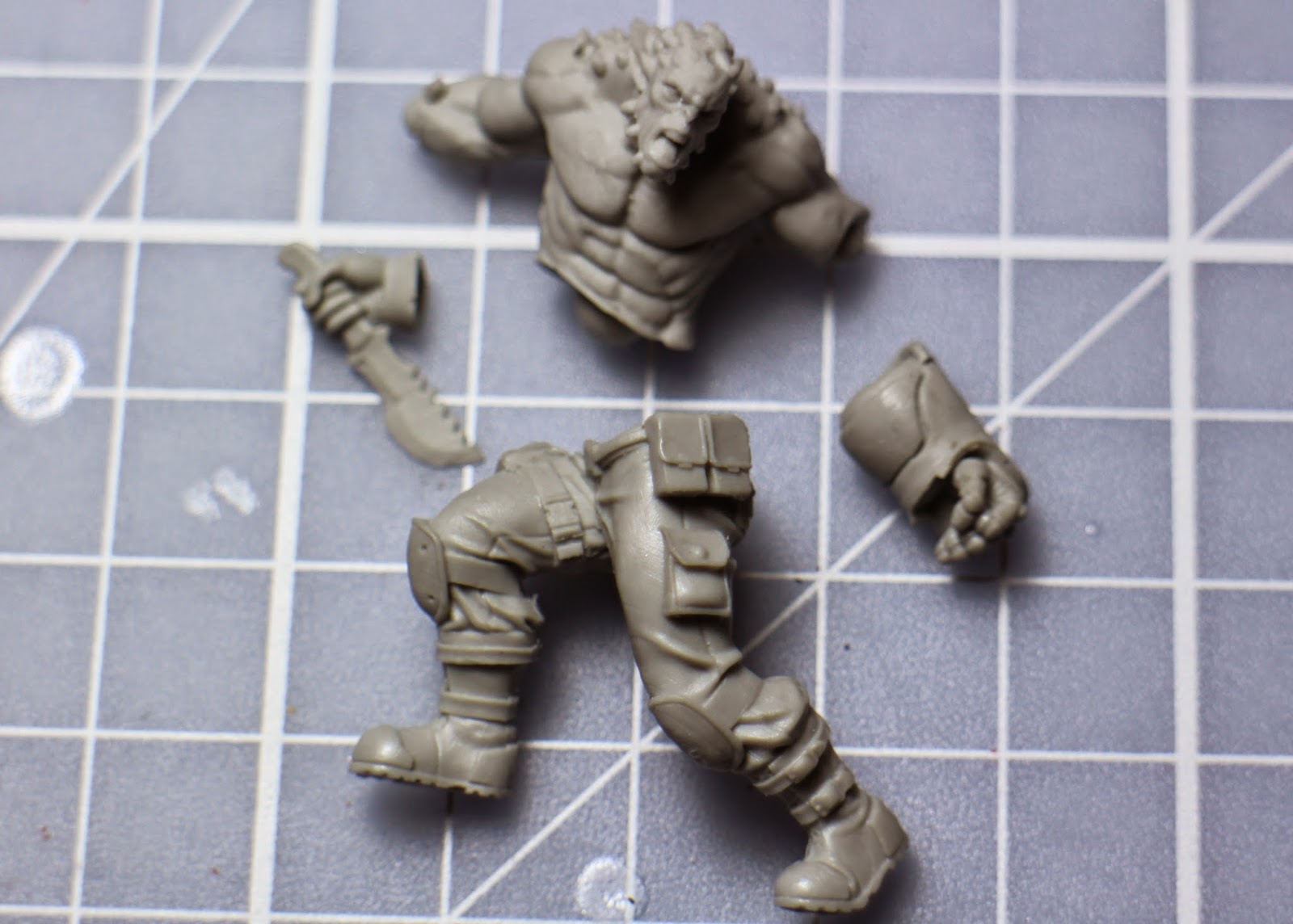 All of the miniatures in Final Frontiers are cast in resin which can be a little bit hit and miss but Scale Games have managed to produce a product free from casting imperfections. There were very few mold lines but the few that were present were small and easy to remove. Bubbling was none existent and there were only a couple of small injection tabs to remove. All of these combined to make a relatively quick and hassle free preparation prior to assembly.

The miniature came in four parts, the body, legs and each hand. Assembly was easy due to small ball and socket joints which guided and held the pieces in place as the glue dried.

The detailing on the miniature is phenomenal, with oddly my favorite part of the sculpt being the trousers. Believable creases in material can be quite hard to achieve especially for a miniature with such an open pose as this but Scale Games have done a fantastic job. The muscle tone is also a feature worth noting, not only are they anatomically well proportioned (at least for an alien) but the small definitions in muscle bundles really add to the realism.

In terms of scale, the Fallen Frontiers are in 35mm which make them taller than both Warhammers 28mm miniatures and Malifaux's 32mm miniatures (see below for comparison). 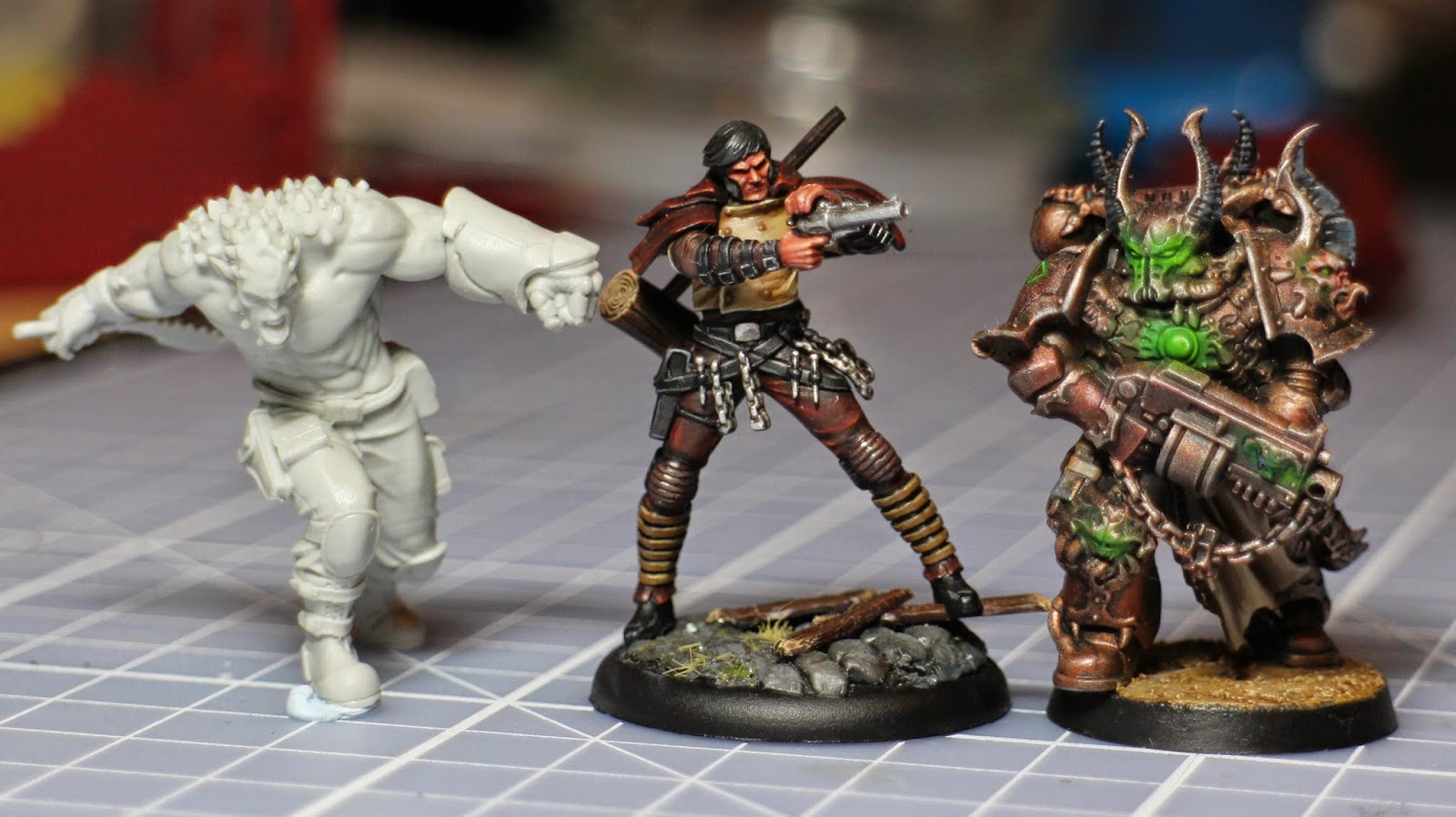 One of the great things about the Fallen Frontiers Kickstarter is that a lot of miniatures have already been created and we can see the final outcome before pledging. Saying that, it's always nice to get a hold of the miniatures to see if they live up to the hype and, after taking a look at the Riffs Berserker, I can safely say that this miniature does. The quality of the sculpt is fantastic and I really like the aesthetics of the Fallen Frontiers miniatures.

My only concern would be the lack of variation available between several of the same unit. As they are single pose there would undoubtedly be duplicates. However, this is a small price to pay considering just how dynamic the poses of the Berserkers are.

If you have yet to pledge your support for Fallen Frontiers you can head over to their Kickstarter Page. As I mentioned earlier, the project has already been funded and is working its way through stretch goals. Some of which include a free hero of your choice at the $60k, $100k and $110k. This can be any hero from the add-ons section, regardless of faction.