Yet another promising Kickstarter campaign has fallen beneath our spotlight, this time its Norsgard. This high fantasy heroic scale 32mm skirmish game consists of small bands of warriors battling it out for supremacy. Norsgard has already smashed its target and is well on its way to reaching all of it's stretch goals. It's little wonder that the system has had this much popularity when you take a look at the miniatures available but first lets get a bit of background.

Set in the world of Isbran where it is forever winter and a constant war rages between good and evil. The stalwart orc Templars of the Order of the Ram face off against the elves, the Forever Damned. A new evil has risen however, the long banished demons have returned and enlisted the Tribes of Mork. 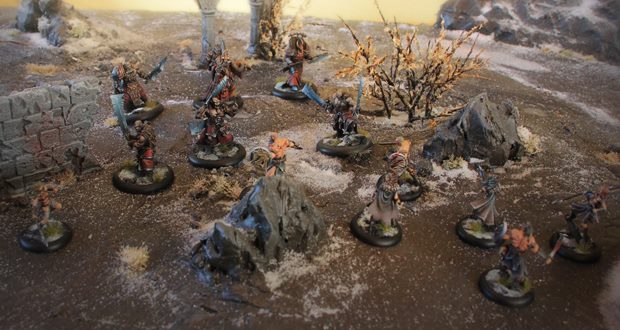 Norsgard rules will not only feature how to play the game, it also covers rules for setting up your own campaigns. Through these you warband can spend their hard earned gold and improve their prowess with the experience that they have gained.

The Miniatures of Norsgard will all be cast in metal with some larger miniatures being in resin. There are also options available to have your starter set in resin but these are limited quantities. As mentioned before, the miniatures that we have so far seen for Norsgard look fantastic. The two main factions the Scarlet Watch and the Howling Hoard each have their own distinct style.

The Scarlet Watch is an order sworn to repent for the sins of it's former members. They patrol the highways, guarding against the Barbarians hoards. What I especially like about these guys is the fact that even though they are Orcs they are not necessarily the bad guys. Aesthetically they remind me of the Orcs in the Eldar Scrolls  or Warcraft series.

The Howling Hoard consists of the Barbarians who have sworn fielty to the newly arisen Demons. The Howling Hoard is your quintessential barbarian. With rippling muscles clad in furs and wielding fearsome blades you cannot deny how cool these guys look.

If you like what you have seen so far checkout the Norsgard Kickstarter Page for more info and to pledge your support.