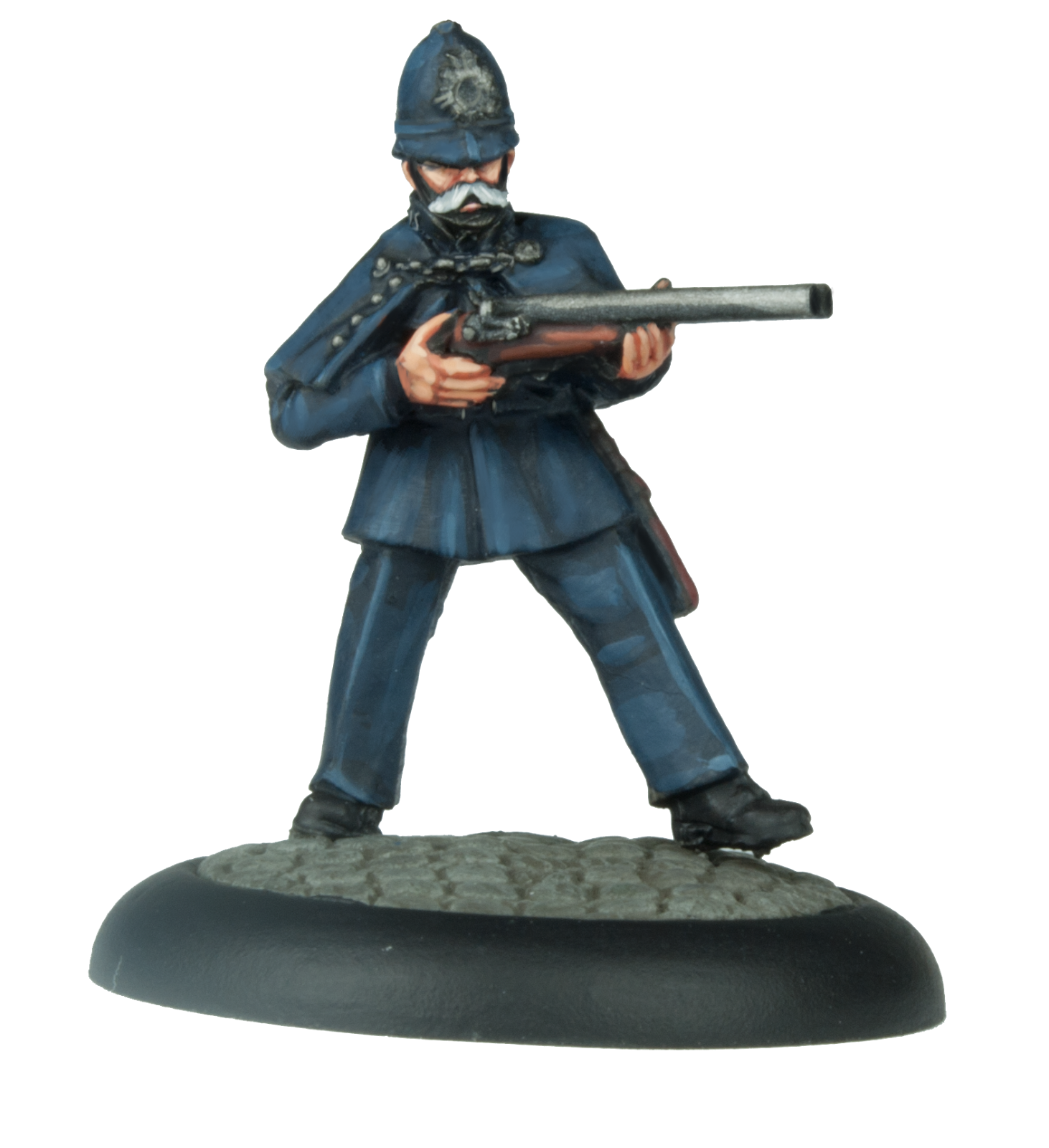 Ready your top hat and wind your pocket watch as we we will be taking you to dark and smog filled streets of Victorian London in our unboxing of West Wind Productions Empire of the Dead. The
28mm tabletop skirmish game, set in late 19th century London, combines Gothic horror and steam punk to create a truly fascinating blend. In this article we will taking a look at four of the many factions available within Empire of the Dead: Vampire Clan, The Brotherhood, Gentlemen's Club and London Bobbies.

Before we take a look at the miniatures lets first look into Empire of the Dead's background. Set in an alternate Victorian London where technological advancement has been accelerated with the discovery the mineral Infernium. As a result hulking steam powered exo-suits prowl the streets whilst mad geniuses tinker with time travel devices. However, this great discovery has a darker side, evil forces are awakening, ready to descend upon the the inhabitants of the Great Smoke. The great struggle for power has begun and London will be the battleground. The game is afoot, and you are in control of the players.

Empire of the Dead originally consisted of four main factions, however these have since been expanded on with the recent Requiem update. The first four factions were as follows:


The Holy Order (The Brotherhood) 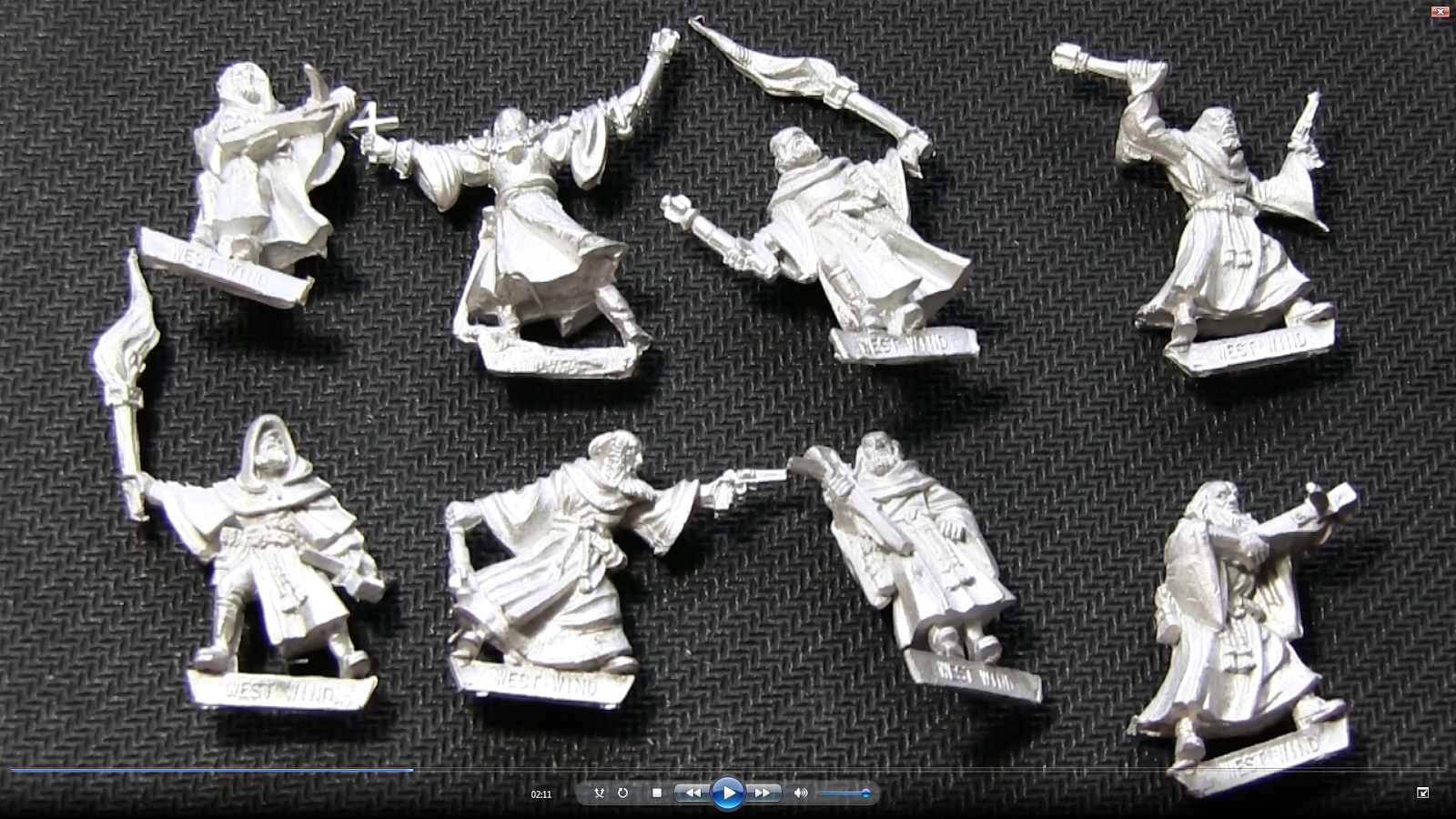 Sworn to protect the faith , the brothers and sisters of The Holy Order fight a relentless battle against the unholy forces of evil. Combining the Knights Templar with Monks, the Holy Order represent the forces of Good within Empire of the Dead. The miniatures of this faction are represented by the The Brotherhood boxed set. This box set consists of 6 miniatures, 1 Deacon, 1 Confessor and 6 Brothers.

The miniatures are styled on traditional Monks, sporting habits a tonsures but also wielding formidable weaponry. Armed with crossbows, maces, flaming brands and pistols these men of the cloth are not to be trifled with.

Vampires have long since plagued the world of man but in an age of corruption their power has grown. Lured from their homelands to stalk the slums of London preying on the innocent and seeking to destroy the technology they despise so much. You can get started with your Nosferatu by picking up the Vampire Clan boxed set. Inside you get 1 Vampire Graf, 1 Consort, 3 Thralls and 2 Bat swarms.

The Nosferatu clan are styled on traditional Vampire fiction, the Grafs long hair and 17th style clothing are indicative of this. I particularly like the Guardian and the Thralls. There torn rags reveal their background as oppressed poor folk of Eastern European origin.

Any self respecting member of Gentry is fellow to one of Londons many clubs. Within these clubs, inner circles exist of former adventurers and explorers, familiar with peril and the exotic world. These groups take it upon themselves to protect their fellow members interests against the other warring factions. Whilst there interests are purely selfish, often their actions will inadvertently aid the common folk. The Gentleman's club boxed set contains everything you need to field the best examples of high society. Inside you get 8 Gentlemen who can be used to represent the various ranks with the clubs.

Typical of the Upper Classes of Victorian England, these menfolk don their top hats and cloaks before setting out to battle. Wielding canes, sabers, pistols (and even a monocle) the Gentlemen's club really fit the stereotype of the High Society gentlemen.

Half men, half beast, the Lycaon are the subject of fear for ordinary folk. Legends tell of packs of wolf men descending upon their prey by the light of a full moon. What is not widely known however is that the Lycaon are defenders of nature and only seek to hunt those who seek to corrupt and destroy the natural world. The Lycoan forces consist of both Werewolves, wolves and men all of which can be found in the Werewolf starter Set. Although I won't be looking at the Lycaon as part of this review they were worth the mention. In addition to the original four, several .,new factions were added as part of the Empire of the Dead Requiem release. These include the Supernatural Branch, an arm of Londons police force dedicated
to hunting down the paranormal and restoring order to a city in turmoil. The London Bobbies (set 2) comes with 7 Constables and a Detective.

The constables are dressed in the iconic Victorian Peeler uniform featuring the famous Police Helmet. All of them are equipped with trusty truncheons with one miniature carrying a bulls-eye lantern as well. The Detective Inspector is wearing a trench coat and bowler, setting him apart form the rank and file.

I really like the universe that West Wind have created for Empire of the Dead. The whole Victorian aesthetic mixed with advanced technology and gothic horror really has a certain appeal. We have only covered a few of the factions available, but there are many more available, each with their own unique style and traits.

The miniatures are nicely detailed and single cast which means you can be painting them in no time at all. However the fact that many of the miniatures are one piece does limit you in terms of customization and variation. But as this is a skirmish game where only a few miniatures are needed it's not a big problem. Besides there were many more additional models added as part of the Requiem release which really help to expand your forces.

Overall I would say that I am very happy with my first taste of empire of the dead so expect to see more of this range in the future. If you would like to find out more about Empire of the Dead or pick up some of the miniatures yourself be sure to check out West Wind Productions website HERE.
By Unknown