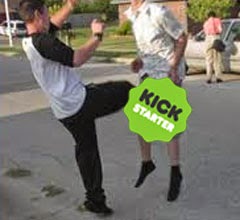 Now all the work and holiday shenanigans are over and done with it's time to turn my attention to TWG.  Something we've been slacking on recently is our Kickstarter coverage so I'm going to take this particular column under my wing and give it a new name (because calling it This Week on Kickstarter and publishing it fortnightly was stupid)... drum roll please.


Naming things has always been a major pain in the arse for me so I've decided to keep it simple with a "Kickstarter" anagram.

Second thoughts we'll just call it Project Kickstarter eh? I'm going to highlight all new projects as they arrive and also comment on cancelled projects, funded projects and those nearing the end each week.

My words will be bolded in Talk Wargaming green.

First of all we need to catch up on the current Wargaming related projects out there. In no particular order.

The folks over at Dream Pod have a hugely successful kickstarter in full swing right now. Check out the link above for the rundown on stretch goals, add on rewards, risks, challenges and actions on clunking robot attacks. 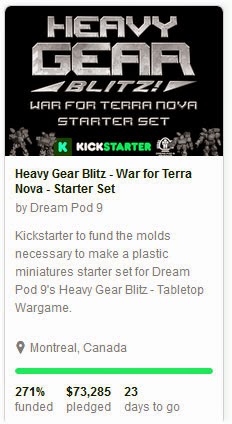 The Heavy Gear Blitz - War for Terra Nova - Starter Set Kickstarter is to fund molds for plastic miniatures. These high quality multi-part miniatures for our tabletop wargame will form the new two player Basic Starter Set of 16 miniatures - with 4 different models at the start.
We don't want to stop there, a Core Starter Set is also available, with stretch goals that will unlock new models and add more plastic miniatures to the Core Starter Set. Our desired goal is a Core Starter Set of 46 miniatures and color quick start rulebook, which will be accomplished by reaching the 13th stretch goal of $105K CAD. This would allow for a variety of eighteen different models from 4 factions in a Core Starter Set for two players, with a multiplayer option of up to four players. We need your support to make it happen.
Reaching all our stretch goals will allow us to give our Backers even more, with 52 miniatures, twenty-four different models, for the cost of the Core Starter Set.
We believe that being an early supporter should be encouraged so we are setting our reward levels so that the early Core Starter Set Backers will get their rewards shipped out in the first wave. Sign up for the Core Starter Set early to lock in your shipping order and watch as stretch goals bolster your forces!
All models from the Starter Set and unlocked models will also be available at a special price for this Kickstarter to all backers as add-ons rewards for their pledges. Additional Basic Starter and Core Starter Sets are also available as add-on rewards, if you want an extra set or two for yourself or a friend.
We will also be adding some more pledge levels for Faction Army Sets once enough of the models for a faction are unlocked and a new retail pledge level once stretch goal 13 is reached.
The staff at Dream Pod 9 thanks everyone for their support.

Another massive kickstarter funding right now is this beast from Zealot Miniatures. I've attached a couple of pictures to highlight their designs but you need to head over to their kickstarter page to see the full selection. 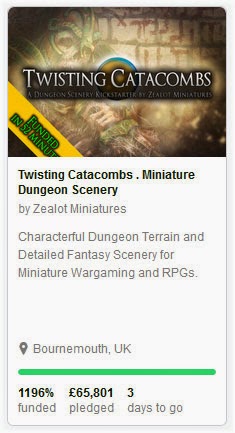 We do love a good Dungeon Boardgame or Fantasy RPG! It's great fun exploring dungeons with friends or family, playing an engaging narrative and taking a welcome journey into a magical world of heroes and adventure!
But often, something ruins the immersive experience with these games. Its the one aspect which is always overlooked by game publishers. It's like its an afterthought with the big games companies, tacked on the end of a release with some cheap tokens or flimsy card terrain.
Real Dungeon Scenery has been forgotten for long enough!
If you are the kind of gamer who wants an engaging and immersive environment when you play your favorite games. If you want detailed scenery and a wide range of characterful terrain for your heroes to interact with and explore. And if you want to really impress players, with a rich and visually impressive game. Then this Kickstarter, was made for you!
We aim to produce detailed scenery and characterful dungeon terrain for the gaming world. Based around an "inch square" system, the terrain is compatible with a whole array of boardgames and RPG games such as Dungeons and Dragons™, Heroquest™, Dwarven Forge Terrain™ and essentially anything using 28mm-30mm scale character miniatures.
Cast in quality Resin for maximum detail. No odd materials, no "restic" - just RESIN, the tried and tested, gamer's material of choice for decades!
With this terrain, we offer you the tools to forge your own narratives. Create amazing furnished dungeon chambers, which will keep players engaged and always guessing what is in store, from one game to the next.


We do love a good Dungeon Boardgame or Fantasy RPG! It's great fun exploring dungeons with friends or family, playing an engaging narrative and taking a welcome journey into a magical world of heroes and adventure!
But often, something ruins the immersive experience with these games. Its the one aspect which is always overlooked by game publishers. It's like its an afterthought with the big games companies, tacked on the end of a release with some cheap tokens or flimsy card terrain.
Real Dungeon Scenery has been forgotten for long enough! 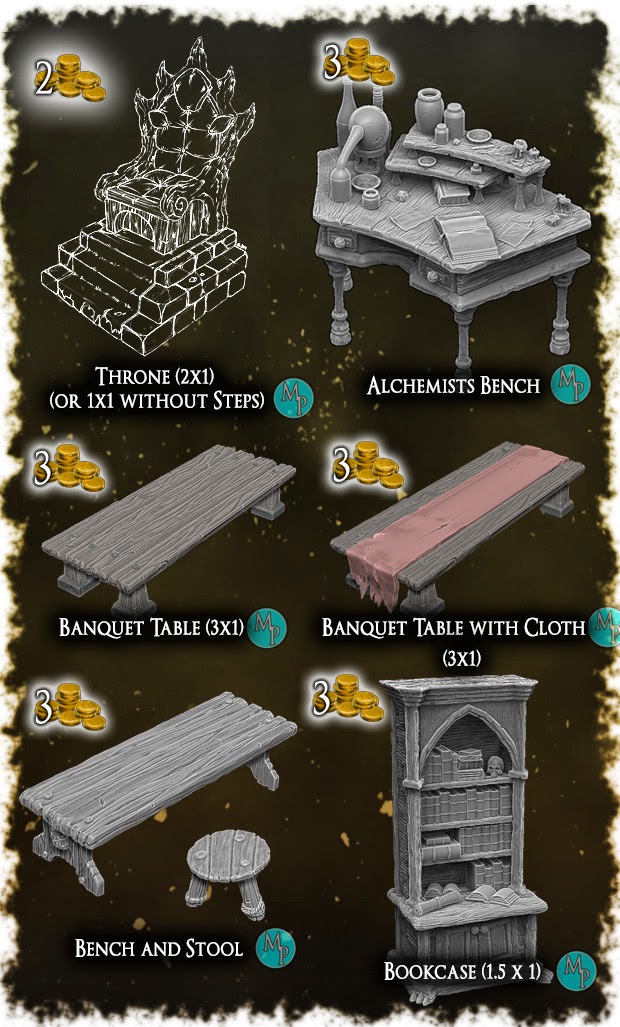 It seems everyone is dipping into the giant clanky robot market these days. Next up is another funded project from Oathsworn Miniatures with a handy "Space Marine" reference picture. 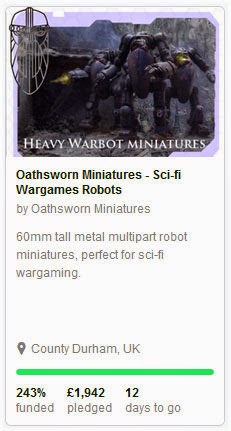 This is something a bit different for us - we've only done fantasy miniatures projects on Kickstarter up to now. But when we first started making miniatures, we began with robots for sci-fi wargaming; but we didn't do much with them.
And people keep asking us when we'll be releasing them. But we need to have production moulds made first... which is where this Kickstarter project comes in!
We are raising the funds needed to have the moulds produced, and to buy in a batch of pewter for casting. Our funding goal of £800 will cover that.
If we raise more, then we've got a few Stretch Goals we can add, things like alternative limb poses, and a couple of other smaller robots...
You can pledge for one warbot, 3 warbots, or even 6... or if you just want to be involved in a small way, there's a £1 pledge level too. Below you'll see pics of the Pledge levels, a scale picture to show the size, and some possible Stretch goals. 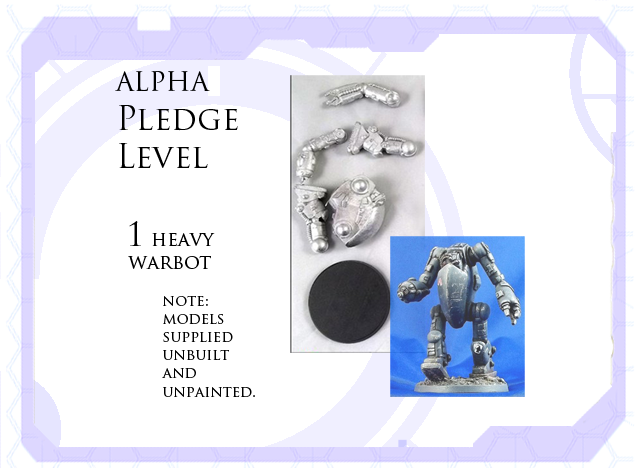 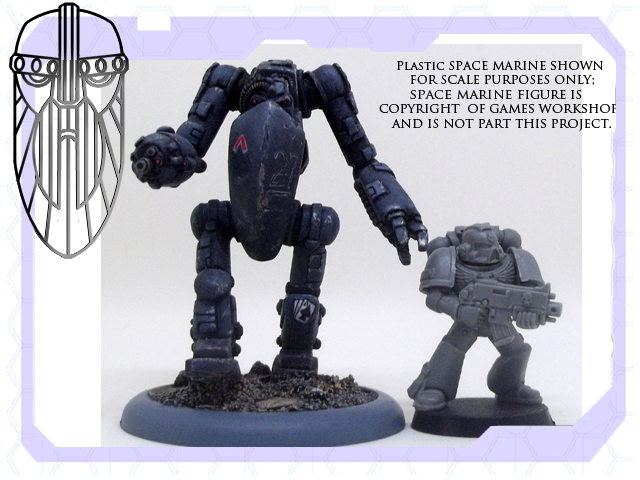 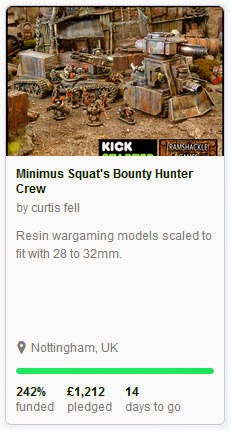 Ramshackle Games is offering Minimus Squat's bounty hunter crew and their vehicle, the Tower of Justice. The models are all cast in polyester resin as per usual and are supplied unpainted and unassembled.

" Minimus Squt is a man of short stature, but towering reputation. As a young man, he was bullied by taller towns people. This brought him to live a somewhat reclusive lifestyle. He roamed the wastes, avoiding contact with cruel and rude wastelanders.

As it transpired, he one day unearthed a cache of techno-tridlins. He found a mighty tracked vehicle, designed for people of shorter stature. Inside were stored three suits of powered exo-armour, again built for small humans. Why this should be he could only conjecture. Were they meant for children? Or were they some military experiment long forgotten? Taking the size of the kit as an omen, Minimus took it and sought other short people. His crew grew slowly as he tracked down other bullied folks of restricted height.
The team forges out into the deep wastes, hunting evil men for the bounty they would bring. Being a very able administrator and tactician, Minimus Squat is renown as a man who gets the job jobbed." 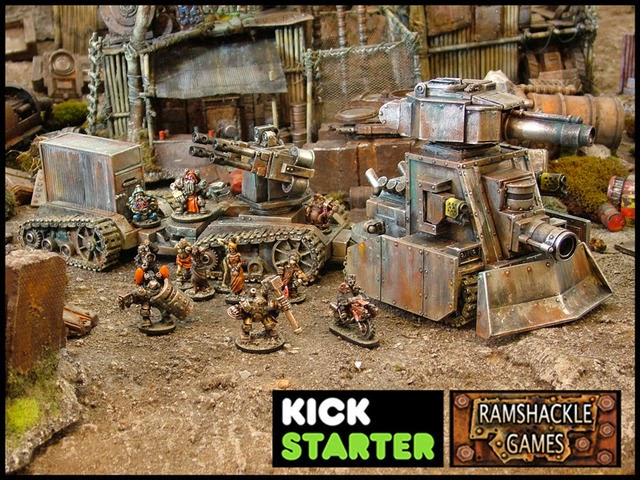 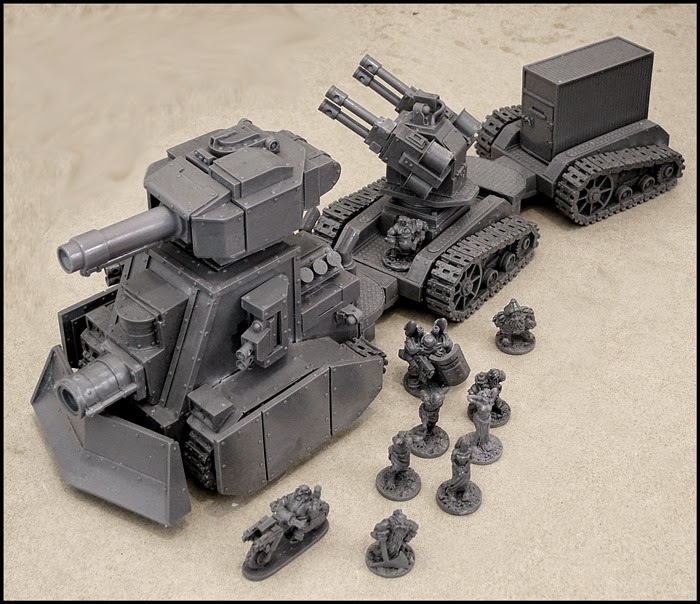 This next kickstarter is one hell of an ambitious (and impressive) project. A full 12mm wargame with all the trimmings. Fantastic miniatures, lore, rules the full package. There's so much information you'll just have to click this link and fill your boots. 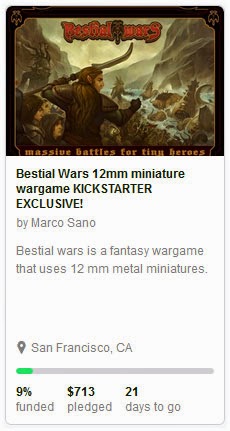 Bestial wars is a stubborn game, carrying on the great tradition of the 80’s and 90’s, all miniatures are hand sculpted and casted using lead free metal.
...we just can’t help but love things that weigh !!!
Bestial wars uses a 12mm scale for all its models, from troops to creatures. Thanks to the small size of the models, Bestial Wars battles are going to feel and look epic; furthermore, the limited number of bases in which miniatures are arranged will allow for fast and smooth deployment and movement. This structure makes the grand battles of Bestial Wars playable with the ease of a skirmish game! 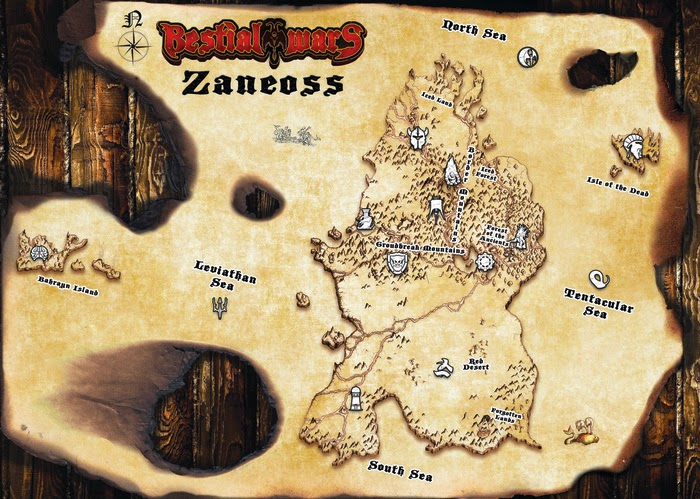 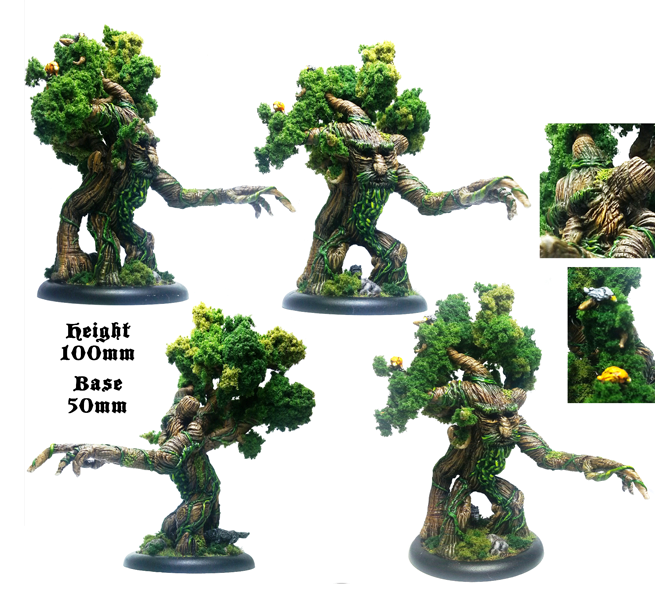 Minion Miniatures - The Monsters of Underdeep

Richard O'Connor is set to release some mighty impressive miniatures with his "The Monsters of Underdeep" kickstarter. Lets hope it's funded well to see how they turn out. 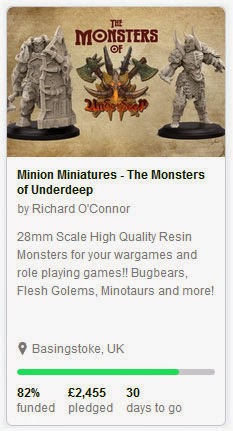 The "Monsters of Underdeep" Kickstarter brings to life the larger denizens of the Underdeep like the hulking Bugbear Ironshield and the freakish Flesh Golem.  The purpose of this Kickstarter is to bring the world of Morn to life and enable us to invest more funds into the designing and manufacturing of our core factions for our Underdeep game.  We plan to release the first faction; Goblin-kind in Spring/Summer 2015, after we have fulfilled this Kickstarter.
The Monsters of Underdeep Kickstarter allows you to pledge toward the manufacture of our range massive 28mm scale, high quality resin miniatures.  These figures are not for the faint-hearted with the average model standing at around 55mm to its eyeline. 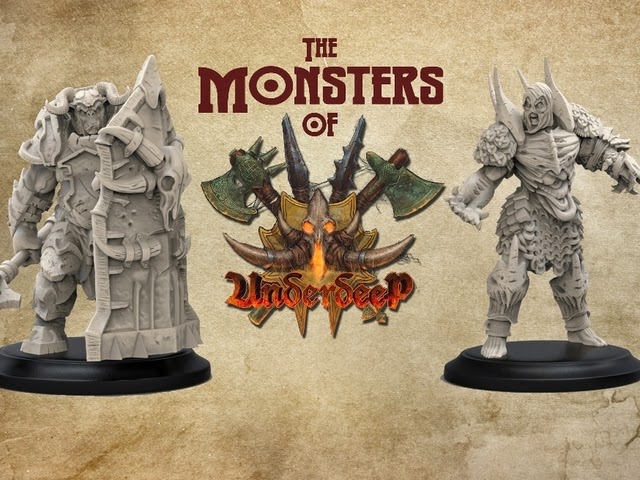 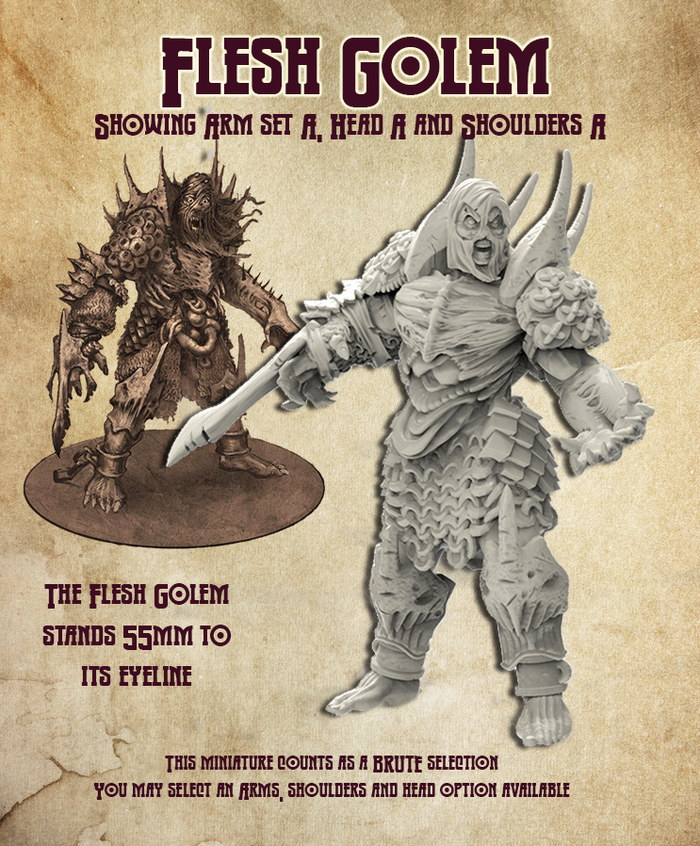 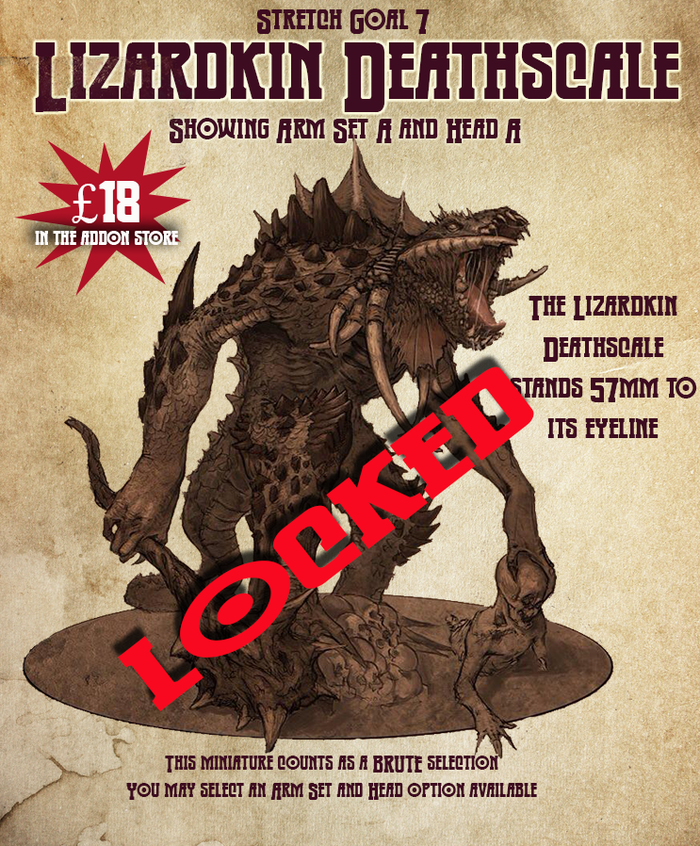 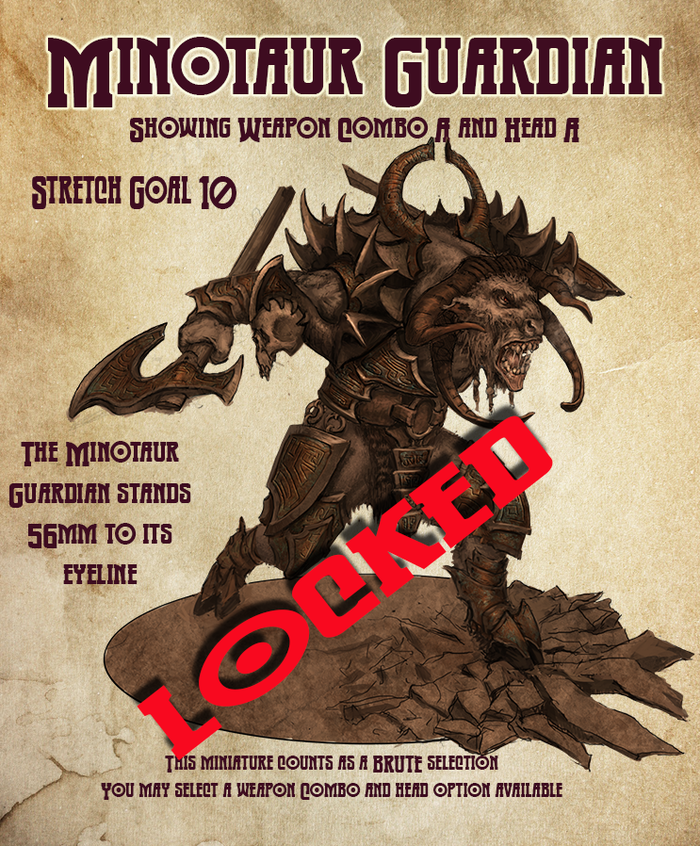 That about covers most of them for now. I'll update in a few hours when my brain starts to function again. If you have a kickstarter you want us to feature please get in touch on Twitter via @talkwargaming email to talkwargaming@live.com or send us a message via the contact form at the bottom of every page.