If you're like me, you probably look at the Imperial Guard (Astra Militarum) Heavy Weapons Teams and wonder how two weedy guys manage to lug around a huge support weapon without any wheels. It may seem pedantic to pick on these minor details in a universe in which huge genetically engineered and armored humans wield giant hammers. but I never said this was a logical argument. What bugs me more is that they used to have wheels back in the day, which made much more sense. But unfortunately we are now stuck with immobile tripods, or are we? Thankfully for us pedants Curious Constructs have created their own line of Field Artillery which make excellent alternatives to Games Workshops Heavy Weapons Teams.

Curious Constructs range of Field Artillery includes 4 weapon variants each mounted onto a standard weapon carriage. The carriage consists of 4 resin parts, two wheels, an axle and a blast shield. The style of carriage is very synonymous with those from WW1 with its structure being built from metal rather than wood.
Whilst being very basic in it's appearance it does feature a small amount of tech in the form of a targeting array and monitor built into the blast shield which lends it a slightly sci-fi appearance. Lets look at some of weapons that can be mounted on to the carriage:

The Gatling cannon looks exactly as is sounds with several rotating barrels arranged in a cylinder. The ammunition is mounted in a top fed drum and it features numerous cogs in which the drive the mechanisms. It would be best suited for use a Heavy Bolter proxy.

The Tesla Cannon is a little different. It consists of three rotating cartridges feeding power to a central barrel. The rear of the cannon features a belt fed wheel, no doubt used to turn the drums, powered by a small steam engine. The Tesla Cannon would make an excellent alternative for the Lascannon if you were looking to create a more 'techy' looking force.

Imagine a Steampunk Lascannon and you have yourself the Laser Cannon. Similar in structure to GWs, it features a bulky set of coils at the rear of the weapon topped off with a pair of spinning brass balls. The barrel features exposed pipes and really gives the impression of a experimental and powerful piece of technology. Obviously, the Laser Cannon could be used in place of the Lascannon.

The Auto Cannon is the illegitimate love child of a steam train and machine gun. Comprising of two sturdy looking barrels stacked on atop the other, the Autocannon is a fearsome looking weapon. Fed by two top mounted cartridges and powered by a steam pistons it wouldn't look out of place in a late Victorian armies arsenal. As the name suggests, this could be used as a replacement for GWs Autocannon.

All of the weapons shown so far have been equipped with the blast shield, however it is not necessarily a required part. As you can see from the images below, the field artillery looks just as good without it.

In terms of scale, the Field Artillery pieces work perfectly with any 28mm scale miniatures, especially GWs Imperial Guard. I have included an image of an Imperial Guardsman standing next to the Gatling Cannon for scale purposes. 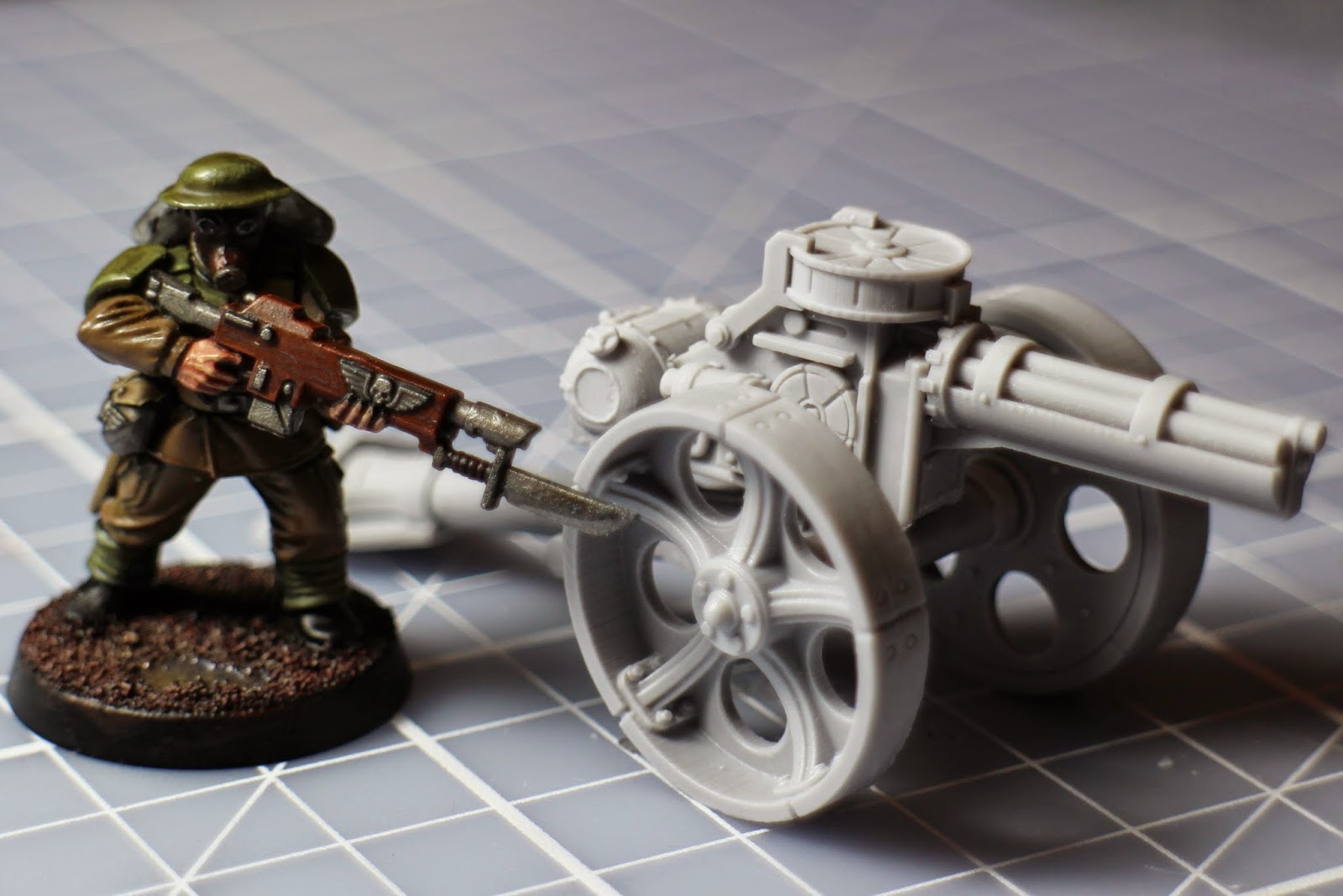 If you're looking for an alternative to the Imperial Guards heavy weapons then Curious Constructs field artillery is an excellent option. Their steam punk styling would be perfect if you wanted to field a Vostroyan style force as well. If, on the other hand you would like to use to GWs heavy weapons but still have them mounted on wheels, the carriages are available separately.

The sculpts are well detailed and and come in only a few pieces meaning that they are easily built and ready for painting. The carriages are a little more pricey than their Imperial Guard plastic equivalents but they have been designed to allow for the weapons to be swapped which does help out a little. The castings did have a few mold lines and their were some slight miss-alignments but after a quick go over with a hobby knife they were easily removed.

You really can't go wrong with these Field Artillery pieces, especially if you are after something a little bit different. I personally think that they would look fantastic in among my WW1 inspired Imperial Guard (see above picture) but they have many other uses. If you would like to get hold of some of your own Field Artillery you should head over to Curious Constructs website, and check out some of their other products whilst you're there.