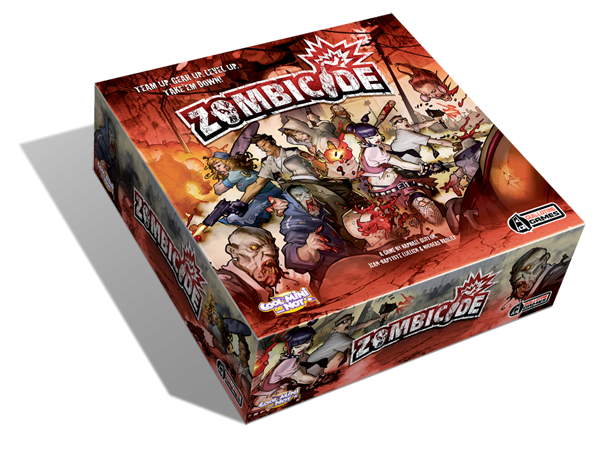 Popular culture is currently full of the undead menace be it in films, video games or even TV shows and that's a good thing. Fellow fans of the recently departed but still upright will be pleased to know that there even exists a board game based around the corpses that refuse to stay still. Zombicide is a
co-operative board which pits a group of survivors against unending hoards of Zombies, sorry Shaun, I said the 'Z' word.

Zombicide is a board game for 1-6 players with games lasting between 30 mins and 4 hours depending on the mission. Rather than playing against your friends you play with them against the zombie hoard instead. Each player takes control of a number of the 6 survivors included with zombicide, each with their own unique miniature and abilities. Facing off against the humans are the Zombies, which come in four flavors: Walkers, Runners, Fatties and The Abomination. Like the survivors each of these have their own nicely detailed miniatures (65 altogether). The game is played on 9 reversible and modular tiles which can be rearranging and fitted together to form a wide variety of gaming boards from one box. Games of Zombicide follow Scenarios which detail how the board should be arranged, what the objectives are and any special rules. The game comes with 10 missions but these can be supplemented with community scenarios or even missions of your own devising.

Zombicide game play is broken down into two distinct phases, the Survivors turn and the Zombies turns. During the Survivors turns players activate their own survivors and perform actions which them. These actions include movement, melee combat, ranged combat, searching for items, breaking down doors, trading weapons with other survivors, driving cars and completing objectives. Each of these costs an action point which a survivor has a limited supply of per turn. Once all the players have activated each of their survivors one after the other, the Zombies get their turn. 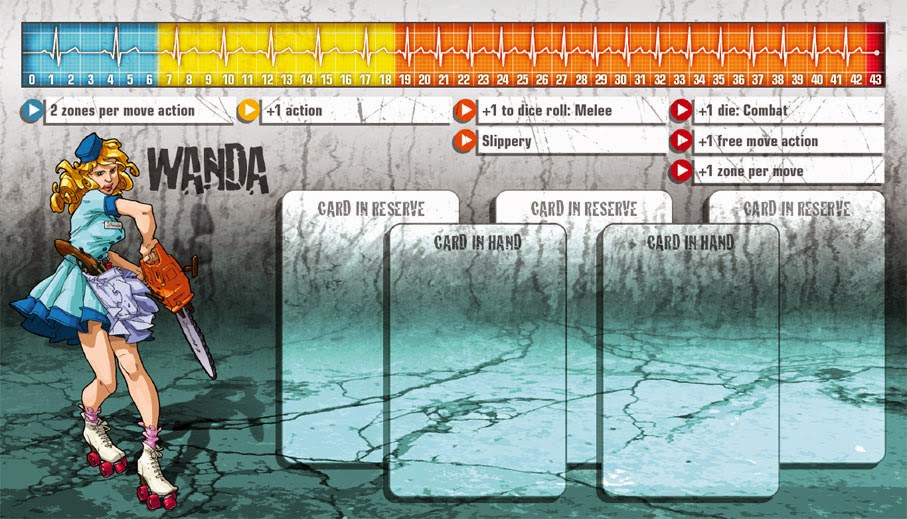 Another interesting aspect about the survivors in Zombicide is their character progression. For every zombie killed or objective completed the survivor will earn experience. There are four tiers of experience, blue, yellow, orange and red with each tier granting additional special abilities. However these improved abilities come at a price. The higher a survivors level is, the more numerous the zombies become. This provides an excellent escalation of challenge throughout the game resulting in often dramatic and close called end games.

The zombies are not controlled by any player. Instead they perform their actions based on what they can see or hear. Certain actions performed by survivors create noise which generates noise tokens. These tokens are used to calculate where the zombies move towards, if they cannot see any survivors. Similarly to the survivors, each zombie gets one action per turn (Runners get two!) which they can use to move or attack. Once all of the zombies on the board have performed an action a random amount of new Zombies will then appear from specific board edges, and sometimes even the sewers. The turns alternate like this until the survivors win, as defined by the scenarios victory conditions, or are eaten by the zombies. 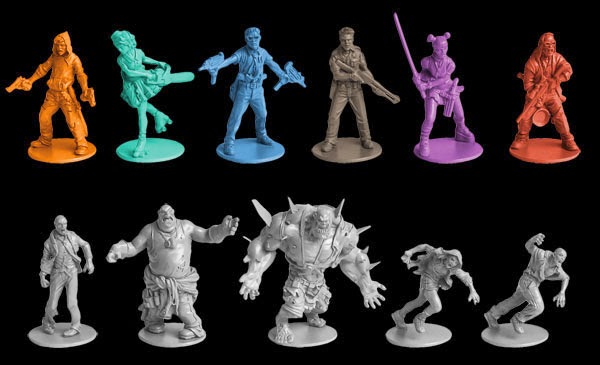 Whilst Zombicide is a little more complex than your average board game it is extremely easy to pick up. The rules are well written and are straightforward and easy to understand without being over simplified. The first game you play will be the tutorial which introduces you to stripped down version of the game which prevents you from being over faced. The progression to the other missions is natural with features such as vehicles and new zombie types being introduced gradually. I felt myself being able to play the game without constantly referring to the rule book book pretty quickly.

The 10 missions you get in the box provide excellent variety with missions ranging from 'Find the Items' to 'Survive as long as you can'. To supplement these there are also free missions published on the Zombicide website. If that still isn't enough for you then you will be able to craft your own missions. Once you have picked up the how the games work you will soon be tweaking existing missions or creating new ones of your own devising. This, combined with the vast amounts of potential board layouts, means that you never really have to play the same game twice.

What is also nice about Zombicide are the miniatures. Rather than opting for the more generic gaming tokens that we see in other board games Zombicide comes with some excellently detailed 32mm miniatures. Totaling in at 71 miniatures you get 6 unique survivors, 40 Walkers (of which there are 4 variants), 16 Runners (2 variants), 8 Fatties and an Abomination. The detail is fantastic even though they are single piece miniatures but Best of all is that these miniatures can be painted. They have been designed in such a way that you can use them straight out of the box or paint them up, just as you would do with any other wargaming miniature.

So would I recommend Zombicide? Hell yes. Zombicide is an excellent bridge between the more involved tabletop games such as Warhammer and more casual board games. The game play is deep enough to satisfy tabletop veterans whilst being straightforward enough to allow Newcomers to enjoy it as well. It is also excellent value for money. 71 miniatures + rules, tokens, cards and boards all for £60 / $65, whilst being more expensive than Monopoly, is still excellent value for the money. If you haven't played it yet get a bunch of friends to pitch in for a set. You won't regret it. But before you go, remember, the assailants can be stopped by removing the head or destroying the brain.
By Unknown