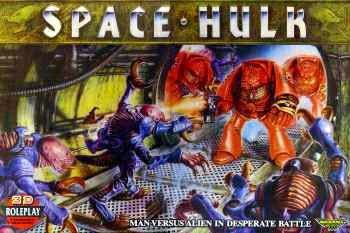 The last few days have seen a number of rumors suggesting that Space Hulk will be making a return with another limited edition run. Well after taking a look at the White Dwarf blog I noticed a cryptic
video preview followed by the words:


Battle Brothers, the time has come to don your Terminator armour once more. Be here on Saturday 13th to discover the latest threat to the Imperium.

The video, which can be seen below, featured a still image of a Space Marine donning Terminator armor interjected by flashes of genestealers. The only logical solution to Terminators + Genestealers is Space Hulk, something that I am extremely happy about. The message states that the 13th September is the day to look forward to but we will most likely be seeing more information in the inevitable White Dwarf leaks. So turn on your Auspex and prepare for boarding, because it looks like we are all in for some classic Games Workshop fun.

A few guys over at Warseer have recieved their White Dwarf early and can confirm that Space Hulk will be coming next. The box is apparently a limited re-release of the previous 2009 edition but with 4 new scenarios + some new counters (boarding torpedoes, turbo lifts). They can also confirm that it will cost €100/£75/$125 and will be English only. More information to be added as it becomes available.

The contents of the set will be as follows: