All Killer Robots All The Time. 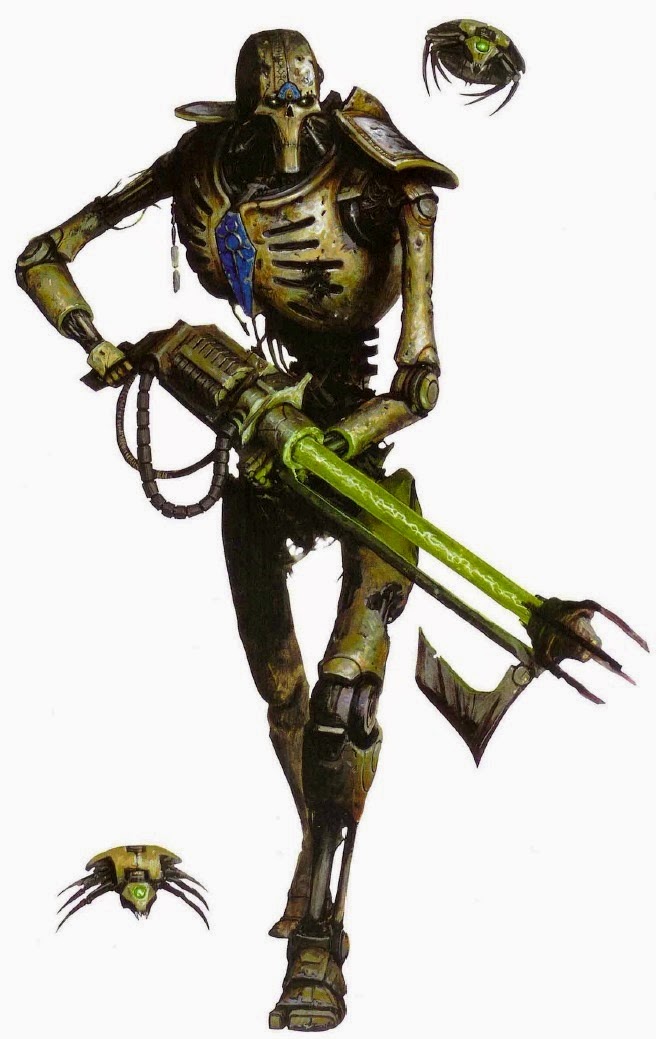 With Dark Eldar in mid-swing it's a pretty safe bet we will get a new Necron book within the next six
months. Probably sooner.

I could not be more psyched!

Now don't get me wrong, the current book is quite strong, but it's been feeling a bit bland for awhile. Especially in competitive play you tend to see the same five or six units over and over (and over...) again. Annihilation Barges, Wraiths, Night Scythes and minimum sized Warrior squads with Destroyer Lord/Barge Lord thrown in as the HQ. Sprinkle with Despair Crypteks or Stormteks as your meta requires. *Yawn*. Needless to say while the Codex as a whole is fairly competitive it's internal balance is abysmal, with its dud units about as terrible as the good units are awesome.

So here is my wishlist, more or less thrown out here just for funsies.

Hob Nobbing With The Snobs.

Necrons suffer from an appalling lack of HQ choices, and I want more. We deserve more. Quite a few more. They aren't even hard to think up, I can rip three straight out of the current fluff right now:

Triarch Praetorians, they have a boss right?
What might a Triarch Lord look like? This is a creature (err, robot) that never went into the Great Sleep and stood vigilant for, literally, millions of years. I'm thinking Fearless, because when you've volunteered to try and outlive the universe while your brethren sleep I don't see much scaring you, as well as they'd default to having the jump-pack thingy, sprinkle in a WS/BS buffs to represent all that time to train and hone your fighting tactics (as well as the constant battling to defend dormant Tomb Worlds) and a few choice war-gear options (seriously, they left these guys to hang out for MILLIONS OF YEARS, you'd think they'd at least give them the good toys) and you could have a fun little HQ.

She blinded me with science... and also laser beams.
How about some sort of Arch-Cryptek, one of the leaders of the Technomagi Conclaves each Cryptek is supposed to be a part of. Surely their bosses would be suitably boss?

For a long time I've wanted to run an all Science Geeks list dammit, and, unfortunately right now the Cryptek special characters can't take Royal Courts so... yah. Can't really do it (well, I can, but only because my standard opponents are pretty laid-back about house-rules). An ArchCryptek could have fantastic rules though, fulfilling the same buffing/support role that many Psykers are used for but, y'know, without the psychic part, and could unlock the Cryptek-half of the current Royal Court!

(Admittedly I don't see the Royal Court functioning the same way after the update considering the changes to Wolf Guard but hey, a guy can dream, right?)

Fun with blood and guts.
Lastly I want a Flayed Lord! If anyone else read 'Fall of Damnos' by Nick Kyme you know how insane, and awesome, the Flayed Lord was in that novel. I wants one so badly.

Elites That Are Actually Elite.

The elites section of the Necron Codex is by far its weakest section. Deathmarks, depending on your meta, can be pretty good if you slap a Despair Cryptek in there, and I've found some gimmicky uses for the Triarch Stalker, but by far this section is the easiest to give a miss.

Fun with blood and guts part two.
I have no idea why Flayed Ones constantly get stuck in the Elites section, as even in the fluff they are supposed to be anything but (I could at least see them as Fast Attack, they are supposed to ambush out of the dimensional shadows after all...), but if we are going to be stuck with them there they could at least get some rules to match. At a minimum they need to get Fear back (as their 3rd edition entry had the proto-Fear rule; Terrifying Visage which was fun if only sporadically useful) and they could at least get handed Stealth to match their fluff, but the biggest hit to them was losing the ability to take Disruption Fields, which was kinda a melee version of Gauss. Hand them Entropic Strike or Rending (not both) and I could actually see them being useful.

Lychguards, now with 25% more guardiness.
Lychies are simple, hand them Sempiternal Weave for the 2+ save and a slight points decrease and they'd see a lot more use. I'd also love to see their minimum unit size reduced to three so I could take them as Lord bodyguards (like in the fluff) without having to try and build my list around them due to their price.

Triarch Praetorians, apparently we slept through the millenia too...
Piggybacking on what I said in the HQ section shouldn't there be some indication that these guys actually did something for the 60 million (MILLION!) years the Tombs slept? At a minimum these guys need 2 Attacks base and an upgrade to WS and BS 5 and a points decrease. In addition I think that a 5++ from their Grav Packs is also in order.

Shards of Nothing.
C'tan Shards are pretty fine as is, they just need a drastic points drop a la what Dreadknights got. When you compare that a Talos Pain Engine gets for about half the points after the obligatory upgrades the C'tan are ladled with and its just depressing how overpriced these guys are. Big points drop, including points drops on their upgrades (45 points for a Lascannon, are you shitting me?) and you'd have a solid unit.

Triarch Stalker.
I actually like these guys, their biggest liability being the fact that their fairly fantastic Targeting Matrix ability is so hard to use. If they came with Scout or, hilariously, Infiltrate so that they could make use out of it early on I think they'd see a lot more use. Some sort of actual close combat weapon would be nice too, a Power Weapon at least so that they can't be tar-pitted by 5 hobos with sticks and cardboard armour.

The Fast Attack section of the Necron Codex is actually pretty strong, two fantastic units and one decent one, and only one real dud.,

Zip, zip, zipping around.
Tomb Blades aren't actually bad, they just suffer from the fact that they don't do anything you don't already have a lot of in any reasonable Necron list. I've never regretted taking them, and nor has anyone I've ever talked to, but I've never been grateful I did either. They just pour out more of the standard shots Necrons already pour out en masse. Which is too bad because they have awesome and hilarious fluff about them cartwheeling around the battlefield with a gleeful disregard for any sense of shame, or gravity. Also they are supposed to be the Necron's anti-space fighter unit, which makes it weird that they are solely kitted out with anti-infantry weapons. Say what?

Simple fixes really, give them the ability to activate Skyfire at will at the start of the Shooting Phase and a bonus to their Jink saves. Twin-linked Str 5 Gauss (especially if Gauss Blasters went back to Assault 2 instead of Rapid Fire) is actually a pretty decent threat to a lot of Flyers out there, especially those pesky Tyranid flyers since its AP4. It's fluffy, gives them a more unique role on the battlefield, and I get to make barrel-roll noises and giggle maniacally when they pass their jink saves!

Destroy! Destroy All Humans!
Destroyers took probably the heaviest swing from the nerf bat during the transition from the 3rd to 5th ed Codex. To the point where I would gladly just use their original version. Taking massive hits to their maneuverability (they used to be Jetbikes), range (used to be 36”), gun strength (used to be Str 6) and shots (used to be Assault 3) they gained... AP 3 and Preferred Enemy (Everything!)? Okay, admittedly, the exclamation point on (Everything!) is probably one of my favourite subtle jokes ever but they really suffer from being a dedicated Power Armour hunter in a Codex that has absolutely no trouble with dealing with 3+ Saves. Not because we can ignore them, oh no, but because we can just do what Necrons have always done and drown them in dice!

This makes Destroyers an extremely niche unit without a niche, and an extremely pricy one at that. There's a couple ways to fix this, the best being the simple expedient of just giving them back their old guns, Str 6, AP4, Assault 3, 36” range with Preferred Enemy would stand out in a predominantly 24” ranged army if for no other reason than it would allow you to play with a couple other builds. Y'know, ones that don't revolve exclusively around “dominate the shit out of mid-field/all the Tesla, nothing else”. Less effectively they could just get a second Wound and a points decrease, which would make them playable for everybody with a bunch of old ones sitting around but wouldn't fix their “doesn't really have a purpose” problem.

Bring On The Heavies.
I'm not going to bother going through the Heavy Support section units individually, almost everything that is currently bad is only bad because it's gratuitously overpriced. If both the Doomsday Ark and the Doom Scythe dropped into the 150pt range or so I think they'd see a lot more use (the Doomsday Ark should also lose its absurd restriction on moving and firing at full effect).

The Monolith simply needs two simple fixes to regain it's heyday without being the overpowered nightmare is used to be;

- Ancient Armour: The Monolith treats all Penetrating Hits as Glancing Hits.
- Any sort of immunity to Deep Strike tragedies. Whether that's just giving it the Drop Pod rule, or pushing models out of the way like it used to I don't really care, but it's needs a way to get deployed in the enemies face a lot faster with a lot less risk. Half of it's abilities (like the Dimensional Gateway) are only useless because it evaporates to armies designed to take on Adamantine Lance formations and Super-Heavies. Give it back some staying power and it can go back to its original role of movement/reserves shenanigans while being an huge Line-of-Sight blocker right up in the enemies face!

With the advent of Hull Points it's never going to be the invincible beast it was back in the 3rd edition Codex so some protection from melta and getting kersploded in one turn is not only fluffy but hardly overpowered.

Anyway, those are my wishlists for the new book, what are yours?