It seems that the rumors (or should I say hopes) of Games Workshop returning to Fantasy after the Space Hulk release have been dashed with the latest White Dwarf leak. The upcoming cover shows what appears to be a new Haemonculus and Wracks. Following suit with Games Workshops releases this year we can pretty much guarantee that both of these new kits will be available in plastic. Great news for all you sadists out there. 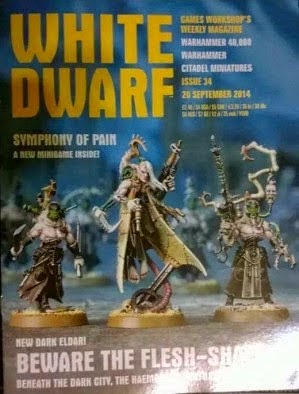 The new kits look great so far. The Haemonculus looks much more twisted and cruel than its previous incarnation which reflects their status of masters of torture. Hopefully we will be given a choice of heads as I personally like the face mask of the current mini. The new Wracks have changed little but having them in plastic is great news. Dark Mechanicus conversions anyone? It will be interesting to see if their Codex positions have changed any with them receiving a plastic incarnation. We can only hope that they retain the ability to be fielded as Troops.

It seems that there is currently a push to get all of the 40k Codexes in hardback, with a good chance of us seeing a hardback Dark Eldar Codex soon this leaves us with Blood Angels and Necrons still in the old style paperbacks. Can we expect these to be released within the year? It's hard to say but after Dark Eldar make the 5th new Codex this year (7th if you include Tempestus and the Knights) then there are good odds that we will two more Hardbacks released before the years out.

If you needed further proof of Dark Eldars re-release consider it delivered. In addition to the White Dwarf leak, Games Workshop have also posted a teaser trailer over on their WD blog. The video shows Urien Rakarth stalking an unfortunate guardsman followed by the tag line "Pray we do not take you alive".