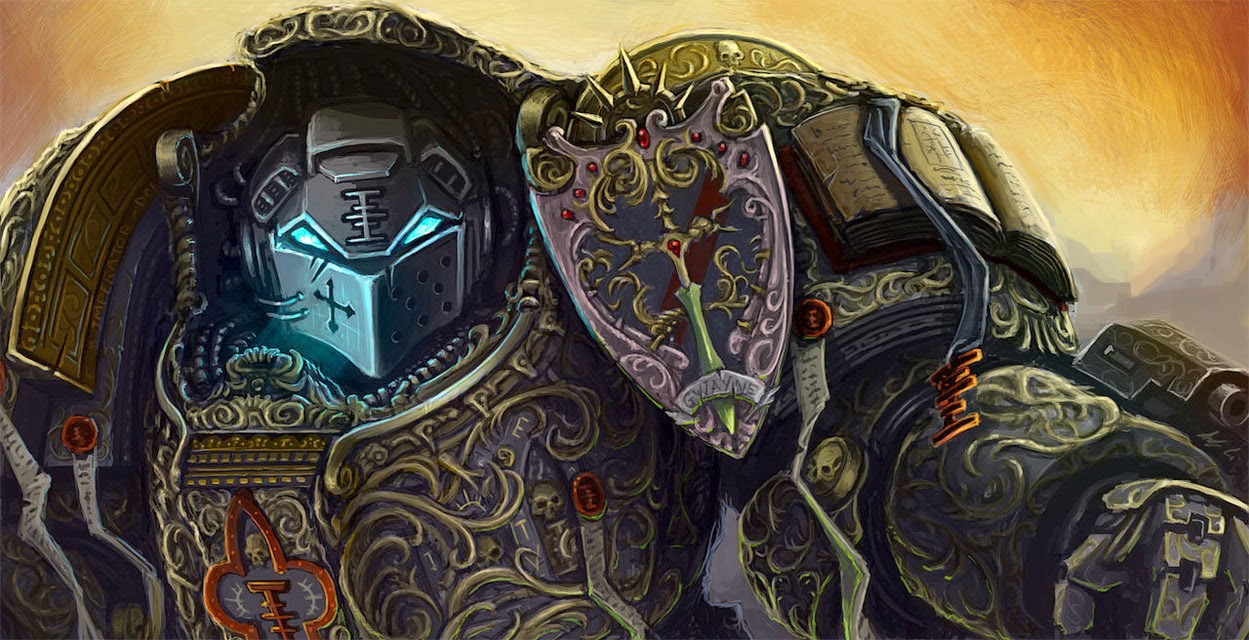 The Grey Knights book appeared suddenly and unexpectedly, but probably was something necessary given that their psychic powers did not work as intended under the 7th edition of the rules. So let’s have a look at what’s new, what’s changed, and what’s cool about the newest printing for the Sons of Titan.


To start, the army’s special rules have remained consistent—Combat Squads works as it always has, while the Aegis allows re-rolls of dice showing a one when making Deny the Witch rolls. Pretty solid—don’t expect to cast anything successfully against them too often! We’ve also got a new rule, Purity of Spirit, which clarifies how Grey Knights interact with Sanctic Daemonology. Grey Knights only suffer Perils on two or more sixes. All Grey Knights have Preferred Enemy (Daemons) although it’s not listed under the army special rules section.
Nemesis weapons are substantially different. All Nemesis weapons have the Daemonbane. Daemonbane triggers off of the Force psychic ability. If the Force ability is active, Daemonbane allows models to re-roll failed to-wound and armor penetration rolls against Daemons. Not bad. The sword is just your basic force sword with Daemonbane now, and doesn’t add to your invulnerable save. But, it’s free. The halberd is +1S now instead of adding to initiative. The Daemonhammer is a thunder hammer with Daemonbane, as expected. The Warding Stave has the Ward rule, which gives the wielder Adamantium Will. Otherwise, it’s a force staff with Daemonbane. The falchion is a Specialist Weapon, but otherwise is identical to a Nemesis Force Sword. Finally, the Nemesis Greatsword is x2S, AP2, and has Daemonbane—essentially, it’s unchanged. Psycannon bolts are gone. So is psyflame ammo. No more paying points for arbitrarily higher strength.

Grey Knights have five relics to choose from. The Bone Shard of Solor provides a 3+ invulnerable save while within 12’’ of a model with the Daemon special rule. It goes to a 2+ if it’s a Daemon of Khorne, and the bearer has Hatred (Daemons of Khorne). The Cuirass of Sacrifice is a suit of Terminator Armour that grants It Will Not Die and Feel No Pain to its wearer. The Domina Liber Daemonica grants an additional psychic power from the Sanctic discipline, and allows Grey Knights within 6’’ to re-roll ones when casting Sanctic powers. The Fury of Deimos is an Assault 3 storm bolter with the Precision Shot and Master Crafted rule, which has an extended range of 36’’. The Nemesis Banner gives Fearless to friendly models within 12’’, and grants Grey Knights within that range +1A. All daemons (friend or foe) within 12’’ of the banner, including open ground, as Dangerous Terrain.  Finally, there’s The Soul Glaive, which is a +1S AP3 Melee Force Daemonbane Two-Handed weapon which allows re-rolls of failed casting of the Force power. If the Force power is successfully manifested, the Soul Glaive re-rolls failed to-hit, to-wound, and armor penetration rolls against all targets, not just Daemons.

This book is purely Grey Knights; not like the previous Codex: Grey Knights which also included Inquisitors, their retinues, and the like. These are still able to be brought, they just have to come out of Codex: Inquisition now (or the upcoming Codex Assassins digital download).

Grey Knights HQs have seen an overhaul, with Brother-Captains and Grand Masters under the same heading now. The difference between a Captain and a Master is solely in the profile; the Grand Master has an extra attack on his profile, as well as an extra Mastery Level. Both models have three wounds; a major increase for the Brother-Captain. They can generate their powers from Sanctic Daemonology, Divination, Pyromancy, Telekinesis, and/or Telepathy. Their default equipment is terminator armour, a storm bolter, a Nemesis Force Sword, iron halo, frag and krak grenades, and psyk out grenades—you’ll find most models in the army get frag, krak, and psyk-out grenades by default.

Captain Stern has a special rule which buffs his casting of the Banishment power, and knows Banishment, Hammerhand, and Sanctuary by default—he is Mastery Level 2, but knows an extra power. These are fixed, and he does not randomly generate abilities. He’s the same cost as a basic Grand Master.

The Brotherhood Champion has a fixed master-crafted Nemesis Force Sword that he cannot trade, and has fixed psychic powers—he knows Banishment and Hammerhand. He’s limited to two stances now, which confer special rules. He has a choice of either having the Smash rule, or re-rolling failed saves. He chooses at the start of each Fight sub-phase, and can choose the same one each round if he wants. He has no options, but feels like a solid low-point HQ  selection.

Crowe doesn’t have his glaring drawbacks anymore. He doesn’t help your opponents and he doesn’t have to be on his own—he’s now an independent character. Otherwise, he’s basically unchanged, and is a very solid choice as long as you don’t mind the fact that he’s armed with just a close combat weapon. Crowe doesn’t make Purifiers Troops anymore, though.

Much like the Space Wolves before this, Librarians took a major points reduction. Grey Knight Librarians are 135 points for a Level 3 psyker who can draw from Sanctic Daemonology, Divination, Pyromancy, Telekinesis, and/or Telepathy. He comes with a Warding Stave but can trade it for any weapon but the daemonhammer for free, and pays a pittance to have the daemonhammer. He can choose from Special Issue Wargear and the Relics list. We already saw a lot of Librarians in Grey Knight armies, and I expect we’ll see many more now.

Techmarines are an HQ option that can be included at a one-to-one ratio for every other HQ you bring. Their powers are fixed as Banishment and Hammerhand. He has the option to replace his servo-harness and bolter with a conversion beamer; otherwise, he can draw on the entirety of the armoury. He’s got Bolster Defenses and Blessing of the Omnissiah, as per his Codex counterparts.

Generally speaking, all squads know Banishment and Hammerhand as fixed psychic powers, and don’t roll on Sanctic Daemonology. Purifiers know Cleansing Flame in addition. Squads for the most part are the same as they have been, with some minor points adjustments here and there to bring them in line with newer books. There’s really not a lot to say about the squads in the book—they’re unchanged in role and function, and neither really gain nor lose any options.

Dreadnoughts have changed a bit, in terms of points costs. This seems to largely reflect their Psychic Pilot rule and fixed Banishment and Sanctuary powers. Rhinos, Razorbacks, Stormravens, and Land Raiders don’t have Psychic Pilot, which keeps their points (and entries) identical to those in Codex: Space Wolves, and likely what we’ll see in further Space Marine codecies.

Kaldor Draigo is now a Lord of War choice, just like Logan Grimnar and Ghazghull before him. He no longer makes Paladins a Troops choice. But deep down, I think everyone who built a Draigowing army knew that wasn’t going to last forever—it felt very “gamey” and didn’t really reflect how the Grey Knights deploy, so I’m not surprised to see it gone. Draigo knows Banishment, Gate of Infinity, Hammerhand, and Purge Soul from Sanctic Daemonology as fixed powers. He’s Mastery 2 though, so that’s pretty cool that he knows an extra power. The Titansword is a +3S AP2 Nemesis Force Weapon that’s got the Master-Crafted rule.

The formation in the book, the full Grey Knight Brotherhood, gives you a buff on reserve rolls and allows your units to use Battle Focus (as Codex: Eldar) on the turn they arrive from Deep Strike. It also lets you manifest warp charges on 3+ while the Grand Master of the formation lives.

The unique detachment, the Nemesis Strike Force, gives you the same reserve buff and Battle Focus when they arrive from Deep Strike. It has a single mandatory HQ choice and a single mandatory Troops choice, and allows for fewer Troops, Fast Attack, and Heavy Support choices in favor of a single additional Elites choice over the standard detachment. While this detachment offers substantially fewer choices available, Grey Knights are an elite army that doesn’t need all those slots anyway, and make up in droves what they lose there in the ability to both run and shoot when they come in from reserve.

The Grey Knights Tactical Objectives are as flavorful as the Orks and Wolves before them—they revolve entirely around killing daemons and psychic shenanigans.

All in all, I like the book. I know there’s a lot of complaining going on right now with the loss of Draigowing, and this attitude that somehow the book has been nerfed. While it’s certainly true that some options are gone, and others have simply been relocated to Codex: Inquisition and Codex: Assassins but remain otherwise unchanged. The Nemesis Force Weapons feel a lot less gamey and a lot more in line with other power/force weapons in the game now. The squads work correctly in the psychic phase now, with a balance in mastery levels, clarifications on how Grey Knights interact with Sanctic Daemonology, and have fixes to special rules that no longer functioned or functioned correctly in the new edition of the game. Could this book have been better, in terms of adding options or a new unit? Sure. But it does what it needed to do, and why I think it was sort of hustled out in the first place—it remedied the army not functioning correctly in the psychic phase of the game, which is the appeal of the Grey Knights in the first place from a rules mechanics standpoint.