The Great Grey Knights Split - by Isaac ‘The Dinosaur’ 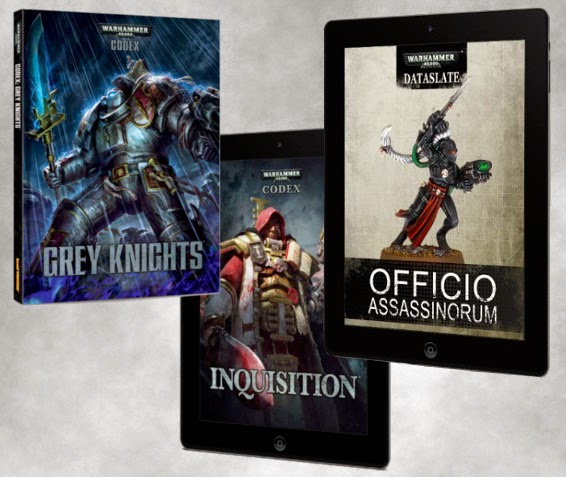 
By now, everyone’s geared up and knows about the recent Grey Knights release.  And this release is an especially polarizing one- there’s an amazing rift between those who are bubbling over the new book and others, who are fuming and frustrated about the whole thing.

It’s about time for someone to explain the great rift the new release has created, what I’d have done differently if I was Games Workshop, and the looming secrets behind that pretty new cover.  Because really, the release is both a great and terrible thing.


I tack the issues on to the fact that Grey Knights players come in two varieties.  A good number of Grey Knights Players could be considered ‘Pure’ players- people who construct their lists around the shiny demon hunters and their toys.  These are the people who are the least affected by the new release.  While they might need to change their strategies and lists, they’re really all good and mostly enjoying the transition to 7th and most are probably enjoying the changes.

The thing is that’s not all Grey Knights players.  There are a great many people who prefer to mix it up taking assassins, Inquisitors, and the other more unusual assets, maybe even making entire lists with only a few or no actual Knights.  I’d call these players ‘Samplers’, and they have been hit hard by this release.

With Assassins and Inquisitors being sectioned off into their separate codexes, some people have lost half or more of their armies.  And thinking about the division, it becomes a question of price and content. 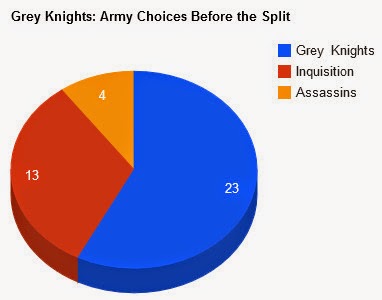 
Many people might interpret this release as a cheap cash grab- indeed, they might be right.  Someone who had an army of Grey Knights, Inquisition Elements, and an Assassin suddenly have to pay 90 bucks just to maintain their army the way it was before.  And with the lack of any meaningful additions to the Grey Knights to replace the things ripped out, it's been quite rageworthy for some.

There's also the question of content, especially for those who have decided that they're sticking with the vanilla codex.  Grey Knights have always been merged with the Inquisition as long as they’ve existed specifically because the Grey Knights can be a rather bland lot without them.  Grey Knights simply feel like they could use something more in the latest release. 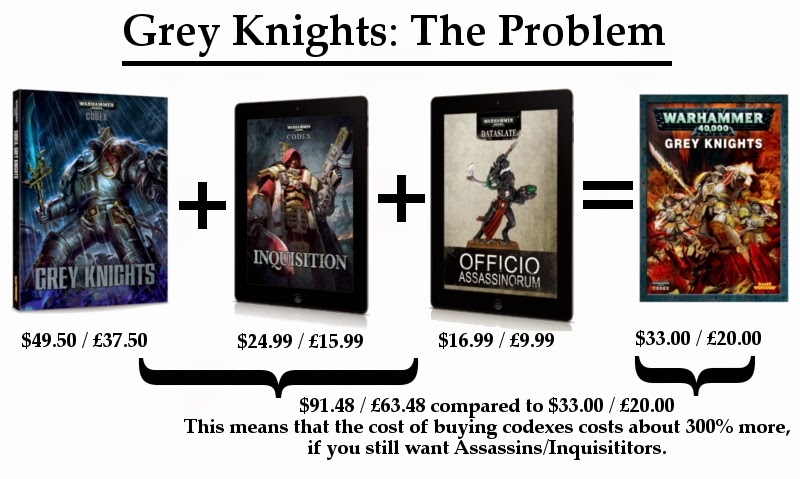 
There’s an obvious fix to this problem.  Why don’t you take the people that buy the Grey Knights Codex, and give them a free digital copy of the Inquisition Codex and/or the Assassins Codex?  The costs of letting someone download a digital codex is negligible so if even one person bought the Knights codex who wouldn’t otherwise, there’s profits.  And even if it’s not about the money, it would legitimize the ‘Samplers’ as a real group and throw them a bone.

You could also add content to justify the Grey Knights and the Inquisition as two different, full armies.  This would mean adding new options, particularly for the Inquisition.  At the minimum, I think it would have been nice to give the Inquisition a better way to function as an army in-of-itself when you section them off. 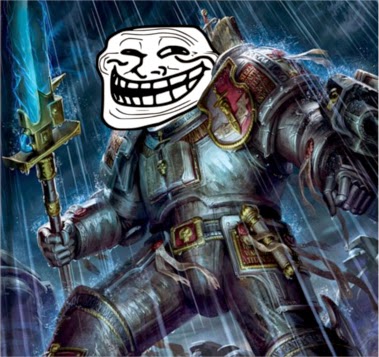 Let's face it, Games Workshop won't listen to me.  So what will become of this latest problem?  I already know, as I'm magic and my crystal ball sees the future perfectly.

The 'samplers' will get frustrated, and a lot of them will move to other factions or quit.  A waste of potential, particularly considering the amount of wasted enthusiasm many of these people had for their armies.

Assassins will become far less frequently used, as they were the sort of choice people took for fun and not as a significant part of their force.  Nobody is going to bother with the dataslate.

The Inquisition might go one way or another, but it seems like it'll probably go the way of the Militarum Tempestus (Read: a minor, almost-ignored part of the game that is rarely used, and enjoyed by a few.)

Standard Grey Knight players will be mostly unaffected.  They’ll have to adapt their strategies, but it really doesn’t look like they’ll suffer.  In fact, it seems like the split will focus Grey Knights armies more; it’s just a shame that this has come at the expense of the ‘samplers’.

Posted by Isaac ‘The Dinosaur’