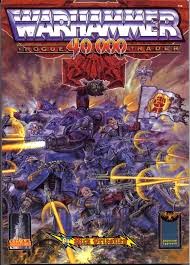 Even if you are not a fan yourself, if you are in to table top gaming then you will be somewhat aware of Warhammer 40k. It is quite arguably the largest tabletop miniatures game to currently exist but how much do
you really know of where it all began. Well in this series of articles I hope to explore the origins of 40k and the path it took to become the game we know today. Although I am no historian, and I was born four years after 40ks first appearance, I have scoured the internet bring you a guide to the 41st Millennium throughout the ages.

Warhammer is old, not in the sense that the Pyramids or the Earth is old but it is still of advanced years. At 31 years old, if Warhammer was a human it would have a mortgage and be saving for its kids college funds. The table top fantasy game we know and love was born in the age of Rubiks cubes and Mullets and has been siphoning our bank accounts ever since.The first inkling of a futuristic version of rules for Warhammer featured in the Citadel Journal of Spring 1986. These rules allowed for you to use futuristic weaponry with your Warhammer fantasy units, yes you read that correctly. The intention was to allow you to play a Judge Dredd miniatures game based around a Warhammer Fantasy core, the rules can be found HERE.


It wasn't until 1986 however that we saw the first form of 40k, Rogue Trader created by Rick Priestly. Originally just Rogue Trader, the Warhammer 40k was added to distinguish it from the 2000 AD Series, Rogue Trooper. Rouge Trader was officially announced at Games Day 1987 and was a lot different from the game we know today. The 1st Edition of 40k was a cross between a traditional RPG and a table-top battle game designed for smaller scale skirmishes. The rules were based on the those used in Warhammer Fantasy with changes made to encompass the futuristic setting. Armor played a larger role, psychic powers replaced magic and new rules were included to cover the more extensive use of ranged weaponry. 40k was also different from its Fantasy and modern day counterparts in that individual miniatures could be targeted, the focus moving towards individuals rather than units.

The Rogue Trader rule book also contained a vast majority of background relating to the 41st Millennium and was pivotal in laying down most of the groundwork for the ever expanding 'fluff'. This additional background information was so popular that we still see rule books with vast amounts of page space dedicated to fluff. Although the overall theme of the books had the familiar 'Grimdark' and Gothic approach the series in general was much more 'Tongue-In-Cheek' than it is today. For example, Space Wolves Primarch Leman Russ was the Lord of Lucan (original the Space Wolves home world), if you are unaware of the reference THIS may help.

Rogue Trader is also responsible for the introduction of many of the races that are still available today such as Dark Eldar, Eldar, Orks and Imperial Guard. Chaos forces were not as well covered at Rogue Traders initial release but later supplements beefed up their role in the 41st millennium. We also saw the inclusion of a a number of now extinct races to the 40k universe. These included Zoats, Space Slann and the eminent Squats.

The first batch of Rogue Trader miniatures were a random assortment of characters and different races. Most are familiar such as the Imperial Troopers, Space Goblin (Gretchin), Space Orc and Dark Elf Space Trooper (Dark Eldar). Among these however are a few interesting additions, namely the Space Dwarf (Squat) and the Piscean Warrior. The Piscean Warrior is a amphibious type lizard like alien with an elongated neck and what appears to be a life support suit. Some of these first miniatures are extremely rare now with some selling for upwards of £100/$160 each, so if you see any about for cheap make sure you snap them up! 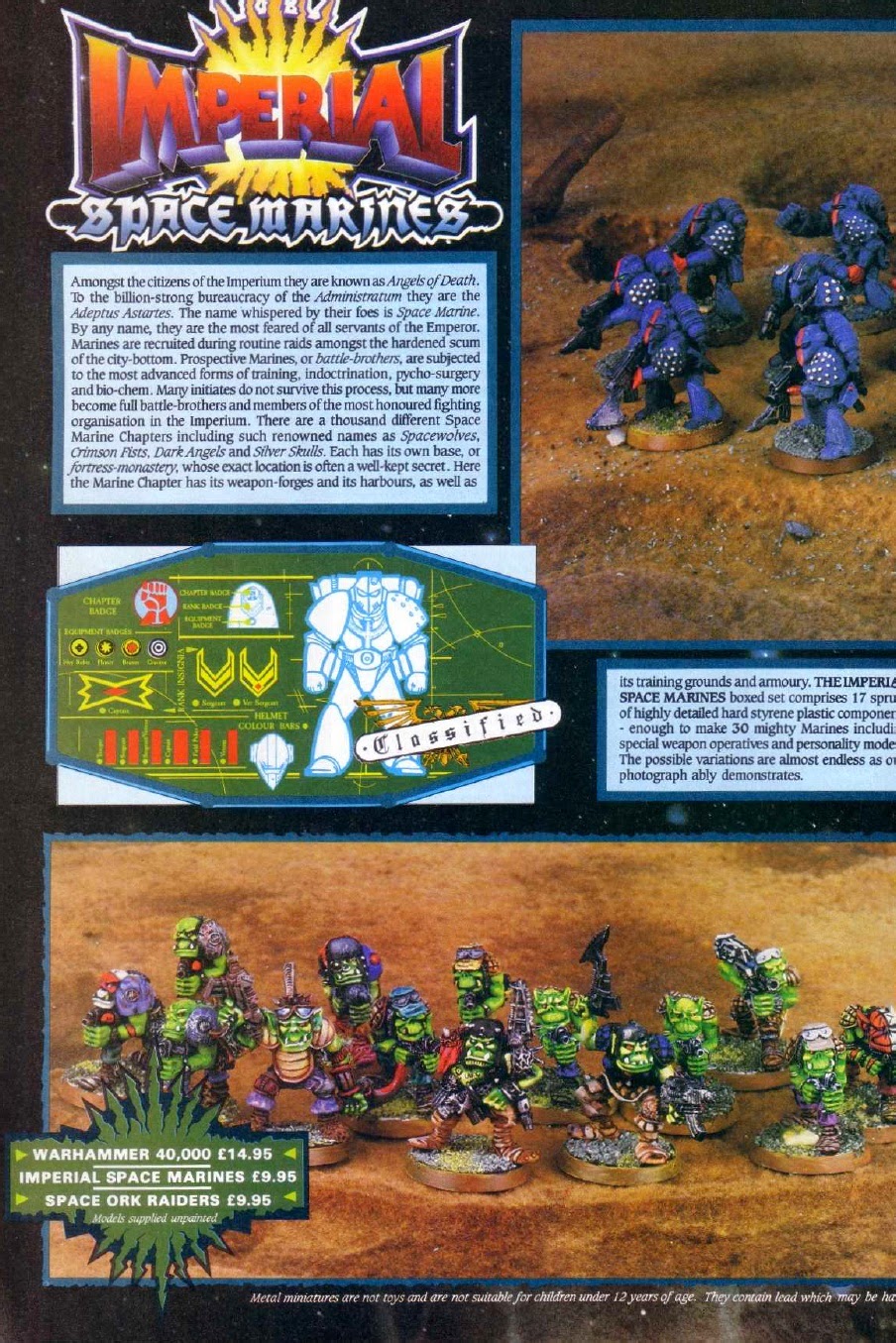 Rogue Traders first official appearance in White Dwarf was in WD93 alongside the first two kits, Space Orks and Space Marines. Although these were not first appearance of Space Marines these were one of the first multi-part plastic kits for 40k. For £9.95 ($16), or £25 ($40) in today's money, you could pick up 30 of these guys. It might seem like prices have skyrocketed seeing as you can only get 10 marines for the same price. But when you consider improvements such as the extra options and quality of the sculpt you can see where the extra cost comes form. Although early marines were easily recognizable  the Rogue Trader Space Orks were a lot different from the ones we have today. They were less bow legged and more anthropomorphic in appearance. They were however, still green.

More miniatures were released over the months following the announcement of Rogue Trader. These covered the other races such as Squats, Eldar and the Imperial Army who are now on their third name.

In the 27 years on from Rogue Traders announcement in White Dwarf has changed and evolved to become the game that we know today. Over the next few articles I will be following the games progressing through each of the editions until we reach the present 7th edition. Look out for the next article where I will be taking a look at 2nd Edition 40k.