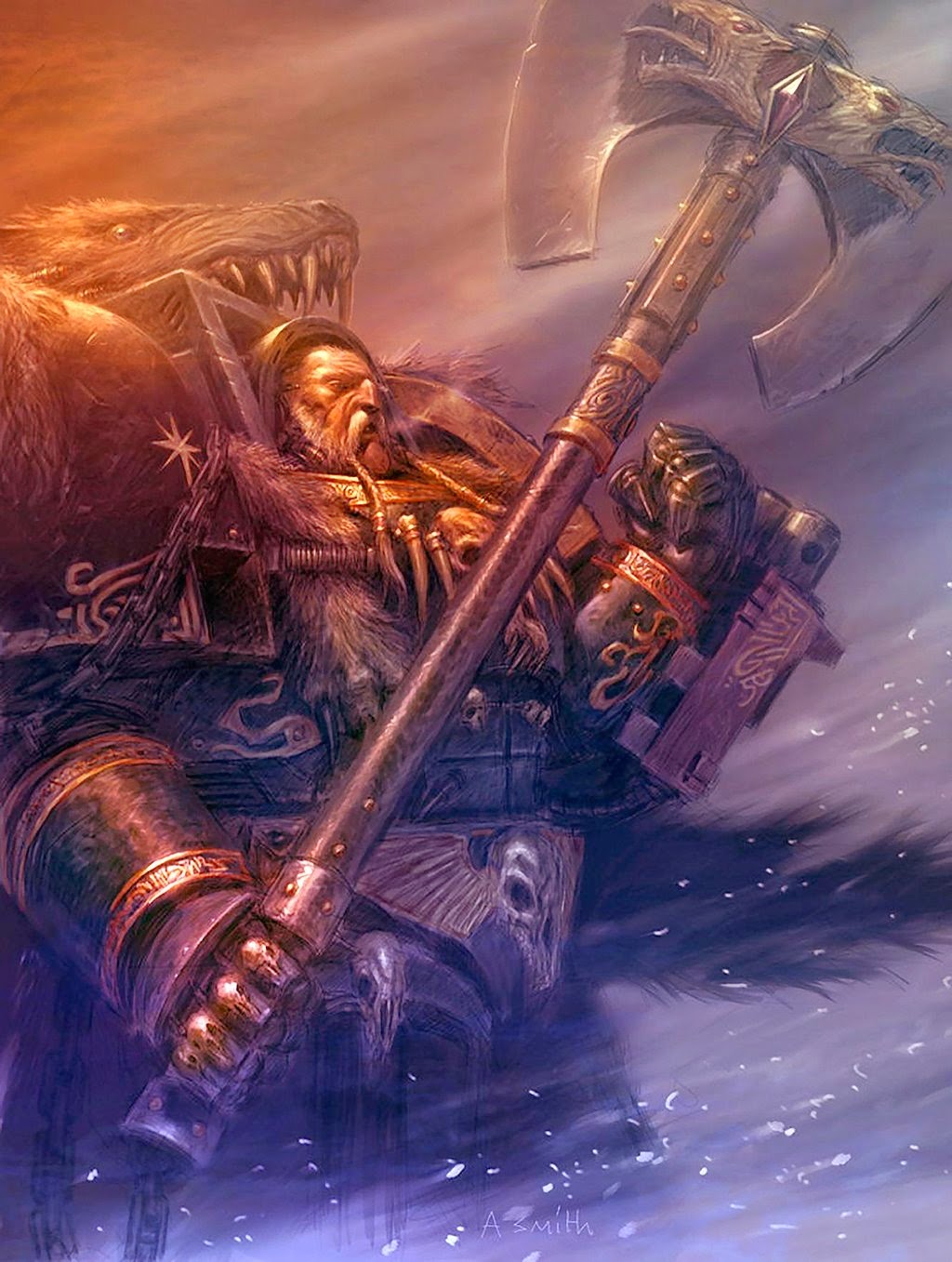 Supplements can add a lot to 40k. Since Games Workshop introduced them early last year, I thought the game took a great turn—there are more options and more fluff available than ever before, if you’re willing to pick up an extra book for your army. Some are more interesting than others, particularly from a gameplay standpoint. Waaagh! Ghazghull, for example, didn’t really add a lot of interesting gameplay options that are plausible outside Apocalypse-sized games, but was some of the best fluff additions to the hobby in a while. Champions of Fenris, however, goes the other direction, adding some small but significant changes to the Space Wolves, creating a huge variety of options for playing with the Sons of Russ. The only background in the book is really the saga of Logan Grimnar, which is cool—I don’t think any character has ever gotten quite as much detail in writing in a Codex before.

Let’s go over the relics, since they’re perhaps the largest change to the army.

First, we’ve got the Armour of Asvald Stormwrack, who was Logan Grimnar’s Wolf Lord in his younger days. It’s a suit of Terminator armor that gives a better invulnerable save, and gives the wearer It Will Not Die. Not bad, and if you’re going for an analogue of the last book’s Saga of the Bear, this is as close as you can get.

Then, we’ve got Frostfury. This is an assault 4 storm bolter with the helfrost rule. If you’ve got the points, it’s well worth it for this one- it’s inexpensive and helfrost is a powerful ability.

The Krakenbone Sword belonged to Logan Grimnar before he was a Sky Warrior, and Arjac reforged the blade into a potent frost weapon. It’s one of the few weapons in the game that’s AP2 that strikes at initiative, and it happens to be Master-Crafted to boot. This one’s a must-have.

Morkai’s Claws are a set of Wolf Claws that are Rending, and have the Maul rule. Maul adds +D3 rather than +1 attack for having two (specialist) close combat weapons. I’m running this on my Wolf Lord, and I’m liking the results so far!

The Pelt of Banewolf gives the bearer Fear, and makes enemy Beasts, Cavalry, and perhaps most importantly, Monstrous Creatures fail their Fear checks automatically. Cheap and highly effective for going big game hunting. Admittedly, it doesn’t work on Fearless models, so it doesn’t help you against Hive Tyrants or Greater Daemons, but there are some potent monstrous creatures out there that aren’t fearless.

Finally, we have Fellclaw’s Teeth, which is a better version of the classic Wolf Tooth Necklace that no longer exists in Codex: Space Wolves. The bearer gets to re-roll all failed to-hit rolls. I’ve paired this with Morkai’s Claws and watched my Wolf Lord kill seven Chaos Space Marines in one round of combat. Consistently.

Then, we’ve got some formations. Most of them revolve around Logan and his Wolf Guard. They’re about what you expect—Kingsguard Stormforce features Logan, a Wolf Guard Terminator Squad, a Land Raider, and a Stormfang. The Wolf Guard pick up Furious Charge and re-roll failed charges when disembarking, and the Stormfang can re-roll failed reserve rolls.

Brethren of the Fell-Handed is a squadron of Dreadnoughts lead by Bjorn the Fell Handed. They re-roll misses in close combat and have a 5+ invulnerable save while Bjorn is alive.

Wolf Guard Void Claws are a unit of Terminators armed with Wolf Claws. They allow you to re-roll failed reserve rolls in general, can re-roll the scatter dice when they arrive from deep strike, and come in on turn 1 from reserves. Kind of cool.

We’ve also got Grimnar’s War Council, or, as I like to call it, the A-Team. It’s Ulrik, a Rune Priest, Njal,
and one Iron Priest. They’re a single squad of beatsticks—I ran something like this out of the old Codex for laughs—a 1250-ish point Drop Pod loaded with as many named characters as I could stuff in it. And it was hilarious and surprisingly effective. I even modelled Arjac to be Mr. T.

Speaking of Arjac, Arjac’s Shieldbrothers is a formation of Wolf Guard Terminators in a Crusader, who pick up Zealot while Logan is on the table. They also have Hammer of Wrath. It’s ouchy.

The Wolf Guard Thunderstrike is a squad of Terminators and a squad in power armor; the power armored squad must deploy via drop pod. Both arrive off one reserve roll, and when they arrive, their ranged weapons are twin-linked. Pretty solid.

Finally, we’ve got the Champions of Fenris formation, which is a self-contained army made up of each of the previous fomrations. They all gain Fear and Fearless, re-roll failed to hit rolls in close combat while Logan is on the table and alive, vehicles all have the It Will Not Die rule while the Iron Priest is on the table, Adamantium Will while Njal is alive, and Preferred Enemy while Ulrik is alive. Powerful, indeed.

Overall, this is one of the most fun supplements I’ve seen. I really like the formations, and the changes to the force organization chart let you play a very elite, but very flexible army that plays up the heroic, saga-seeking nature of the Space Wolves. It’s definitely worth checking out!
By The Son of Horus