Mierce Miniatures is no stranger to Talk Wargaming and we have yet another article themed around this manufacturer of excellent looking miniatures. Well they are back with a brand new expansion, Monstrous Mounts which sees the addition of Great Warlords riding atop fearsome (and huge) beasts. Once again I (PH) have caught up with Rob Lane (RL) to discuss the latest addition to Darklands.

PH: First of all, allow me to welcome you back to Talk Wargaming. Could you give us a brief overview of your latest kickstarter campaign, Monstrous Mounts. 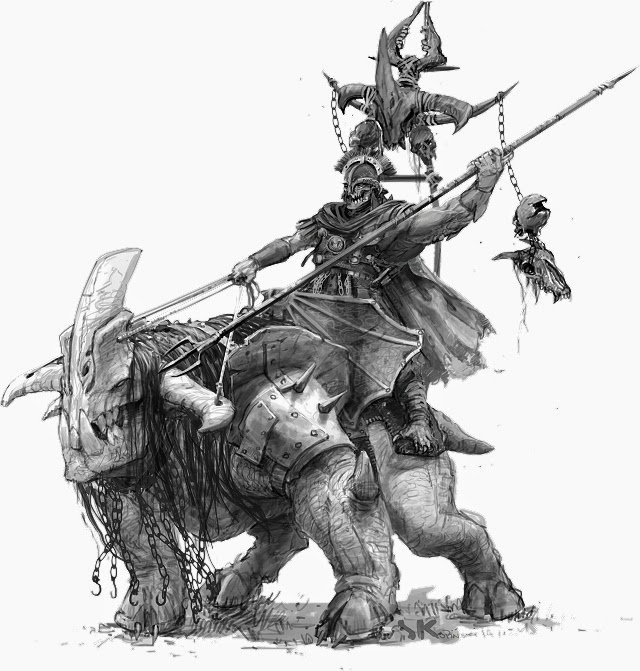 RL: Darklands: Monstrous Mounts is a great opportunity to grab a fantastic monstrous mount centrepiece - such as Erebius on Behema - for your Darklands host (or indeed any fantasy army or miniature collection), one that will dominate the tabletop both visually and in game terms! It also serves to introduce some imaginative new miniatures to flesh out the various kindreds of Darklands, giving you further variety of choice as well as providing an awesome miniature to assemble and paint up.

It ends on Monday the 14th of July though, so be quick and back Darklands: Monstrous Mounts if you want to contribute!


PH: What difference will Monstrous Mounts make to games of Darklands?

RL: Whilst all of our kindreds have at least one Darklands miniature to represent a general and at least one to represent a commander, very few kindreds have miniatures representing powerful warlords riding monstrous beasts. This is where Darklands: Monstrous Mounts comes in, of course, for the miniatures produced by this project combines those powerful individual miniatures with the ability to command hosts effectively, either as the general himself or as a commander.

The structure of a host in Darklands is quite different to many other wargames, you see, for whilst the general can command some units by himself, once a host becomes quite large it proves to be very difficult for him to control all of them. Thus, generals can call upon commanders - individual warriors, perhaps nobles, princes or other champions of stature - to command more units for him in commands of their own. By issuing orders to those commanders as he does his own command, the general can control much larger hosts than he would be able to on his own.

So, by combining your general or commander with a monstrous beast, your host will become more efficient in terms of how it is built - for a monstrous beast's Ubiquity (which is Rare) is ignored, and this may enable you to include some other, very different, Rare warriors!


PH: From what I have seen so far the beasts look fantastic, will you be able to use any of these without using them as a mount?

RL: Absolutely. Something we're keen to do with Darklands is ensure players get as much choice as possible, so the monstrous beast of each monstrous mount is available separately, without the rider or his accoutrements - and at a cheaper price, too. If you back Darklands: Monstrous Mounts, you can get those monstrous beasts 30% cheaper than they will be when released!


PH: Are the rules for using these mounts already available or will they be included as part of the expansion?

RL: The Darklands QuickStarter rules (which will be available in print form in late July or early August) already cover how mounted warriors work, including warriors riding monstrous mounts; and some of the riders currently unlocked on the project already have warrior profiles whether on foot or not. The missing warrior profiles will be worked on over the next few months and playtested, and given when they're ready. We also tend to wait for miniatures to be finished before we make any final decisions on how they work on the battlefield, for only when you get a miniature in hand can some things be concluded - such as attack ranges, base sizes and so forth.


PH: You are no stranger to Kickstarter, with Darklands featuring in a number of campaigns to date. What draws you back to crowdfunding time and time again?

RL: In a lot of ways it's simply down to how the wargaming hobby has evolved over the past couple of years, at least outside of the "big three" companies of course, as well as being able to source the funds to create new miniatures and expand Darklands. Kickstarter is where it's at - it's where hobbyists now go if they want to see new projects, new ideas and exciting things in a hobby they love! 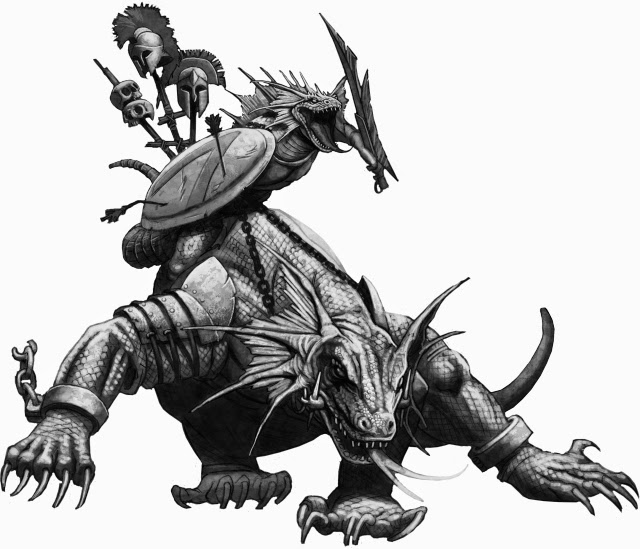 Kickstarter is a great social experience, both for us and our backers (many of which are very, very loyal and back every project), for as the project creators we are constantly talking to our customers. This direct contact allows us all to talk about Darklands, air our views about the latest miniatures, get excited about things, talk about the future, share jokes, even recommend or talk about other projects - it's a real community that just wouldn't be there if we funded our miniatures by conventional means. Thanks to our projects, many people who wouldn't ordinarily talk to others about Darklands are doing so - and it's great to
see. When we held a stall at Salute earlier in the year we managed to meet many of our backers and could converse with them as friends - because we know them through our projects, and they know us! Many people underestimate what Kickstarter does in this regard, and I think some companies see it simply as a cash cow rather than somewhere they can talk to their customers, which is the wrong attitude and probably why they aren't very successful with their projects.

As well as that, we do try to keep all of our customers in the loop as much as we can, and Kickstarter allows that very easily thanks to project updates. We update each of our projects (when we have things to show, at least) every Friday with work in progress sculpts, artwork, news about project fulfilment and so forth. It's a very easy way to keep everybody informed and, of course, display our latest creations to the world! To be honest, I do not understand why so many other projects fall down on this aspect - it's so easy to update a project and, more than that, it's great fun to get people excited about a new sculpt being unveiled or a new piece of artwork to show.

Now, it would be wrong of us not to mention the money that a Kickstarter provides us with, of course. Kickstarter itself and the whole crowd-funding buzz draws in a lot of people who wouldn't ordinarily be interested in what we do, for whatever reason; but Kickstarter projects, probably because of their intensity, their awesome ideas and artwork and the fact that a backer can help bring something to life have an amazing quality to drag people in and make them contribute. The fact is, if we put the exact same project on our own website, showing the exact same graphics and with everything at the same prices, or even cheaper, we wouldn't draw in one per cent of the people that get drawn in on our Kickstarter projects. I'm sure a socio-psychological study could be made about why Kickstarter projects work!

Thus, in a lot of ways, if we want to expand Darklands - well, Kickstarter projects are the best place to do it. We are a tiny, tiny company nestling within a very competitive industry where range stagnation has very detrimental effects, and if we want to get Darklands out there and played we need to keep the range fresh and exciting through expansion and Kickstarter is the best place to fund that.


PH: This project seemed to come out of nowhere, how long have you been planning to include Monstrous Mounts in Darklands?

RL: A while! It's something we've mooted in the past, a mini-project that would fund a handful of miniatures that we'd like to do that won't cost much, and we just thought - why not? Previous Darklands backers know we have a big project coming in September and it's just something to get the juices flowing and to see what would happen. I think we may well do more mini-projects in the future.


PH: And finally, do you have any hints on what else you may have in the pipeline for Darklands? 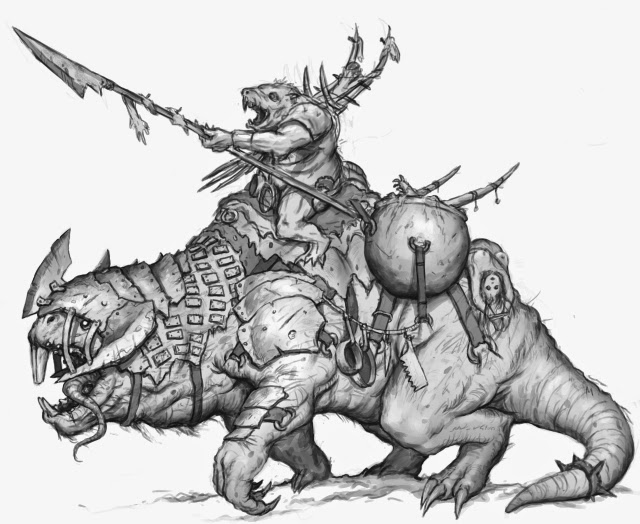 RL: I do indeed. The aforementioned big project, which will start in September and end in October, will bring the Érainn (Irish) and the Atalantes (arcane Ancient Greeks) into the Darklands fold, as well as add one or two new miniatures from existing kindreds. There'll be a starter set for each of the new kindreds that contain a general, commander and infantry as well as options to include monstrous infantry and monstrous beasts, and much else besides. Obviously we can't say too much about that right now, but as we get closer to that project we'll no doubt unveil snippets and possibly even artwork for that project. Stay tuned to our various project updates, or get on to our mailing list!

As well as that, the original QuickStarter rules are finally being printed and we should have those in our hands by the end of July or early August, so people will finally have a physical rulebook to play Darklands with; and the full First Edition rules shouldn't take too long to produce after that. Miniatures from Darklands: First Edition onwards will be released over the coming months and, of course, fulfilment will continue rolling.

This is a really, really busy time for us but we love it - creating a fantasy world and the rules and miniatures to populate that world is something we at Mierce have wanted to do since we were kids ourselves, and we're living the dream.

If your appetite for Darklands has been sufficiently whet you can find out more from our Previous Interview and Malacant Review or you could visit Mierce Miniatures themselves.
By Unknown