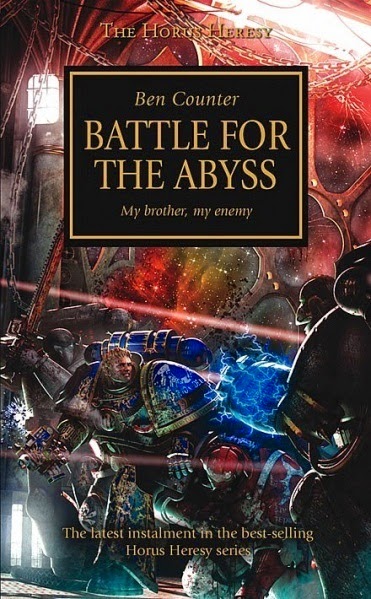 Lord of the Night reviews the eight Horus Heresy novel, Battle for the Abyss by Ben Counter.

“A novel with an interesting premise that is let down by an overly long plot, stereotyped or uninteresting characters and a slow pace that drags on a novel that already feels stretched.” - Lord of the Night@Talk Wargaming
Battle for the Abyss is a Heresy novel that sadly I disliked for a number of reasons, mainly those mentioned in the quotation above. While at first this novel sounds like one with an interesting story, the idea of a group of survivors chasing down a supership and fighting on their own with no hope of reinforcements sounds pretty good, but unfortunately when you don’t care about any of those characters, save one, and the story starts to drag on as the chase keeps going and going and the only source of other material in the novel being the tension between loyalist characters, the fact that at it’s core the story has a good premise isn’t enough to make the book enjoyable.

The Horus Heresy has erupted across the galaxy, and the Legiones Astartes are choosing their sides as the Imperium of Man burns. As the Word Bearers Legion gears up for the surprise attack at Calth that will cripple their hated cousins in the Ultramarines, their secret weapon is en route. With the Furious Abyss at the head of the traitor fleet, Ultramar will be doomed to fall. Only a team of survivors from the Ultramarines, a Thousand Son disconnected from his Legion, a World Eater fighting for control of his mind, and a Space Wolf that resents his subordinate position has any hope of stopping the Furious Abyss, but the odds are almost completely against them and without reinforcements their only hope is a slim one.

As I said above the basic idea behind the book’s story is an interesting one. The Word Bearers mega-ship that will be their trump card at the coming Battle of Calth, and a small team of mismatched Astartes loyalists that must destroy it before it can be used against the Ultramarines. But the problem is that as the book goes on the story begins to feel dragged out, more and more little problems begin to crop up and brief diversions to stretch the story out to meet the 400+ page requirement of a full novel. This, combined with a slow pace and cardboard characters, makes the book feel slow and uninteresting, and by the end I was impatient for it to be over and for the story to finally end. Counter does bring some of his twisted depiction of Chaos to the table which is nice but it’s not enough to make up for a story that really should have only been a novella of about 120 or so pages being stretched into a 400+ page novel. The novel has quite a straight-forward plot as well, there are no twists or surprises here, just a story about some loyalists trying to blow up a traitor mega-ship, the story is clearly intended to be an action-adventure based story rather than one that relies on true plot. But none of the tension or importance of the mission really sinks in through the writing, even less so at this point in the series. (Those who’ve read Betrayer by Aaron Dembski-Bowden will understand.)

The characters were sadly another letdown. I’ll start by praising the one really interesting character in the book, the Thousand Son Mhotep. Mhotep comes across as a more level-headed Thousand Son, someone who respects the boundaries of knowledge and rather than someone trying to be the smartest person in the room, he feels more like someone who knows right from wrong and wants to use his knowledge in the cause of the former. His interactions with Brynngar, the Space Wolf, were also interesting as he showed signs of humility and accountability/responsibility that the other characters in the series from his Legion lack. But Mhotep is unfortunately not enough on his own to make the character base in the novel entertaining. The Ultramarines under Captain Cestus have almost no personality, only the Captain who refuses to give up on his duty and the loyal Lieutenant/Best-Friend are fleshed out to any degree, and it isn’t much. Both come across as Ultramarines, nothing more. The Space Wolf however was the worst offender, if I were to compare him to a 40k Space Wolf I would see almost no difference. And as Abnett showed in Prospero Burns, there is an immense deal of difference between a 30k and 40k Space Wolf, there are similarities yes, but enough differences to notice. Here there is no such thing and the Space Wolf’s sole purpose in the book is to bitch about the Ultramarine being in charge and repeating that they cannot trust the Thousand Son because he’s a witch; which got old after the second baseless accusation. The Word Bearers were little better, each one being the stereotyped slinking coward and slimy double-dealing villain that twirls his moustache and flees when the heroes begin to win. I wouldn’t have minded one character like that, but nearly all of them were like that, bar the necessary dumb brute that follows orders and acts as the bruiser for the leader. The only other character of note in the book is the World Eater and he does feel like a decent character, but still a bit of a stereotype as the brute whose actually pretty smart and hard as nails. He did some cool things in the book, no doubt, but his coolest act was barely explained and glossed over, which was a real shame as I would have loved to see what made a warrior like that make the choice he did.

The action in the book is one-note and forgettable. None of the battle scenes really stand out as memorable or awesome, bar the final confrontation between Brynngar and the Word Bearer Baelanos that was one of the few highlights of the novel. In previous books Counter has always made his battle scenes feel special not by having them be fancy or strange but by really getting into the details of the fight, showing the uniqueness of each enemy warrior and by really getting the personality of the enemy, the madness of Chaos, the brutality of the Orks, etc, across to the reader through the prose. None of that is present in this book, instead the Word Bearers feel like either mid-level game bosses or faceless mooks that exist to get shot by the loyalists, and the battle scenes themselves drag like the rest of the novel. Of course this is the worst thing a battle scene can do and it shows, the battle scenes are among the most boring of the book and don’t serve as a break between the loyalist tensions and the traitor sermonising. The final duel between Cestus and Zadkiel was decent but one or two decent action scenes in a book that has more than a few isn’t good, you can’t really call this book bolter-porn because that implies the battle scenes were engaging.

The pacing is one of the reasons the book doesn’t do it for me. It’s sooo slow. Right from the start the book drags it’s feet trying to expand a plot that doesn’t feel meaty enough to fill a 400+ page book, and the plot suffers for it as multiple little problems and diversions begin to get the main characters distracted and always keeping them just behind the Furious Abyss until the end when they finally catch it. The pacing does get a little better there but by then it’s too late to salvage the rest of the novel, the other problems all combining with a slow pace to make the book feel boring.

My favourite quote, even in a bad novel there’s always something cool being sad;

“Word Bearer. You talk too much.”

The ending wasn’t bad admittedly. I liked the idea of heroes sacrificing to buy time for others, which is a core concept in 40k as the Imperium spends the blood of it’s finest to buy itself a few more moments of existence. Also the idea of what you do in the dark when no-one’s watching defining what you are rather than what you do when everyone’s watching, another core concept of 40k, the heroes being forgotten and unremembered and no songs being sung for them. And with the release of Betrayer by Aaron Dembski-Bowden the ending takes on another theme, futility. Which while is detracts from the other two ideas does make the book feel a bit closer to a 40k novel, the idea that what happened here didn’t matter except to those who were directly involved in it. But while the ending was decent, it didn’t make up for the slow and detached read that was necessary to get there, and with no surprises or twists to really suck the reader in, the book ends as you expected it to from the beginning, which while not always a bad thing, here it might have been a good idea to throw in a twist or two to make up for the dull plot and wooden characters.

For an uncompelling story that should have been shorter; characters that were nearly all either bland and uninteresting, or stereotypes of their Legions; action scenes that were unmemorable and one-note; and a snail’s pace that made all of these flaws worse; I give Battle for the Abyss by Ben Counter a score of 3.0/10. This is not a book I would recommend to the readers of the Heresy series unless you well and truly want to have read everything in the Heresy series, which in that case I would suggest you plough through it as fast as possible and then pick yourself out a really excellent book to wash the boredom from your mind. This book was a disappointment, especially to me who has previously greatly enjoyed Ben Counter’s work and considers him one of the finer Black Library authors.

That’s it for this review. Thanks for reading, until next time;