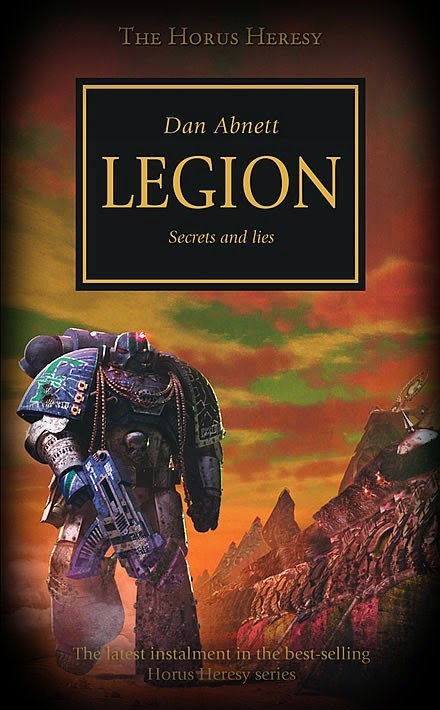 “A novel with interesting concepts and twists, but is let down by the lack of it’s titular legion and by characters either uninteresting or unimportant.” - Lord of the Night@Talk Wargaming
Legion is a novel that I hear a lot of good things about, and there are good things about it; first and foremost Dan Abnett’s writing. But I am one of the few that don’t care for the novel and consider it lacking in several areas, most notably the Alpha Legion who didn’t appear enough, had few characters of note and whose operations were left shrouded in mystery rather than have any of them revealed. I came into this novel expecting a deep look at the Alpha Legion as we got with the Space Wolves in Prospero Burns, the Thousand Sons in A Thousand Sons and the Ultramarines in Know No Fear, the first and third both works of Abnett that proved he could explore a Legion while at the same time telling a great story; yet in my opinion with Legion he achieved an interesting ending with lots of good concepts and potentials, yet failed to tell a compelling story or give the Alpha Legion any real character beyond more secrecy.

The XXth Legion, the Alpha Legion, is by far the most mysterious of all the Legiones Astartes. Operating from the shadows and in ways that very few would even consider an Astartes capable of, the Alpha Legion are the youngest of the Imperium’s defenders and the most secretive. As the Primarch Alpharius and his Legion arrive on the backwater world of Nurth to prosecute yet another compliance action against stubborn natives, their allies in the Imperial Army begin to wonder if they can truly trust the secretive Astartes who won’t even reveal their true names. And as the shadow of the Horus Heresy looms over the galaxy, the Alpha Legion must choose between Horus and the Emperor, yet when nobody in the Imperium but them knows their minds and their ways, can anyone predict where the last of the Legions will stand in the coming days of darkness?

The story in Legion can be boiled down into one purpose. Showing how and why the Alpha Legion chose to stand with Horus in the Heresy. Their motives were never clear in any of the original lore, the only Legion that never revealed exactly why they became traitors whereas it was obvious with the rest. Legion finally reveals the reason why and despite my criticisms of the book I give Abnett credit for a truly surprising twist that was worth reading, yet the read up to that was lacking in everything that I expected. I thought that we would get an in-depth look at the Alpha Legion while the story unfolded, and that both would mesh together nicely as Abnett has done in other books. Yet the Alpha Legion, in their own book, felt like merely one of the players in the story while the Imperial Army, the psyker John Grammaticus and other agents shared the spotlight with them. If anything it felt like the Alpha Legion spent too much time reacting to what others were doing and really only showed up to be mysterious, give a few hints as to their opinion of the wider Imperium, and at the end make their choice. The Imperial Army is what the novel really focuses on, the Geno-Five-Two-Chiliad and how the presence of the Alpha Legion influences their campaign and their personal stories. The presence of John Grammaticus, who is a link to one of the more ambitious plots in the book, is another focus of the book and while what he does ties into the Legion greatly, it again feels like the Alpha Legion’s story is being told using people unrelated to them. The best way I can say it is that the Alpha Legion don’t actually appear in the book until nearly a hundred pages in.

The characters were well written but the key problem is that again, there isn’t enough of the Alpha Legion and in their place we have either inconsequential people who become people of consequence or outside agents here to influence the Alpha Legion and who aren’t a part of them. Of all the characters in the book, only five of them are actually Alpha Legion Astartes, and two of them are the Primarchs. I think that this is the biggest flaw of the novel; that we don’t get to see the Legion from inside eyes and see behind the mask. The novel could have shown how the Alpha Legionnaires think, the divide between who they really are and the mask of Alpharius that they all put on when dealing with outsiders, the Legion’s internal customs and how the Alpha Legion has changed over time with the coming of the Primarchs and of course their views on the others. What we get are a few lines here and there that show how Alpharius views some of the other Primarchs and the Imperium and the rest is left to mystery. Sadly those few lines and scenes are truly fascinating and made me want to know a lot more about the Alpha Legion, to see where their beliefs and philosophies come from and how they developed them, in particular the idea of free-thinking and equal voices that has been established in the lore. Yet Abnett never takes it any further and instead opts to focus on the Imperial Army characters and John Grammaticus, not even really fleshing out any of the Alpha Legion characters beyond Alpharius and Omegon. None of these characters were badly written but ultimately it felt, to me, like they didn’t matter in the grander scheme of things and that they were there to either observe or influence the Alpha Legion, while the reader doesn’t get to see the wider Legion or any of the common Astartes and how they view what happens in the book.

The action scenes in the book are again well-written, but forgettable and lack anything to make the Alpha Legion stand out. We don’t get to see the black ops, sabotage and infiltration warfare that makes them famous and unique among the Astartes, instead the book focuses on the Imperial Army fighting against the natives of Nurth. Really there aren't that many battle scenes in this book, the focus of it being intrigue and mystery rather than shootouts and large-scale warfare, which is fitting for the Alpha Legion but it does feel like we get a lot of build-up and very little payoff in terms of battle scenes. The final chapters do have an enjoyable space battle and one small duel that stands out quite nicely, but really Legion is a book that focuses on story and characters rather than action, which is typical of Dan Abnett’s work in both the Horus Heresy and 40k.

The pacing of the book is done well enough. While I did not care for the book itself, the prose and pacing of the book had absolutely nothing to do with that. Abnett is a great writer and it’s the choices he made in the book rather than the book’s actual prose that made me dislike it. The book’s story builds up slowly, the intrigue and mystery becoming more and more wide-spread until the final few chapters when most secrets are revealed and the Alpha Legion make their choice which results in some twists that make for a nice payoff to the story. The prose itself is good quality as expected of Abnett, I did not like this book but it wasn’t because of the writing, and if anything the good quality of the prose made it easier for me to read the book, if it had been lesser then the disappointment in the direction Abnett took the book and the level of involvement by the Alpha Legion would have had it be the first Horus Heresy book I put down.

My favourite quote, even in a book that I dislike there’s always a badass or funny quote that I enjoy. I choose this one for the context behind it, which was damn good;

The ending of the book was well done, and while I didn’t care for the read up to it I found the ending compelling as Alpharius and Omegon made their choice, though it was the reason they made that choice that made it compelling. But again a real lack of the Alpha Legion in the end, even in the final scenes we see no Alpha Legionnaires beyond the ones listed in the Dramatis Personae, lets the book down while the other characters either live and go onto do whatever comes next or they meet their fate. I quite liked the epilogue, in fact it’s one of the two scenes in this book that I consider to be excellent, and found it to be a very dramatic scene, though one that becomes less dramatic later in the series. Legion closes off most of it’s personal stories by the end while the plot twists begin one of the wider plots across the entire Heresy series, one new to the lore at that, that I think is the real contribution of the novel to the series.

For a story that while not badly written was the exact opposite of everything I wanted from an Alpha Legion story, characters that while well-written felt inconsequential and a bit like intruders in a story that should have featured MUCH more of the Alpha Legion than it did, and an ending that while surprising and compelling did not make up for the rest of the novel I give Legion by Dan Abnett a score of 4.2/10. I would like to point out that this score, which for me is a below average novel just barely above bad, is because of my personal preference in lore, story and characters rather than the actual quality of Abnett’s writing or even the quality of the story and characters. They are both done well, but are the exact opposite of what I wanted. Really in my opinion the best portrayal of the Alpha Legion is the superb novella The Serpent Beneath by Rob Sanders, which was exactly what I wanted out of Legion. Even Gav Thorpe’s Alpha Legion antagonists in Deliverance Lost were better than Abnett’s focus on them in this novel. In my opinion Legion should have been a novella and The Serpent Beneath should have been a novel.

That’s it for this review, thanks for reading. Until next time;