The Ork re-release was officially announced this previous weekend with the ridiculously Orky Morkanaught and Gorkanaught kit. To compliment this news, our tricksy Kommando friends have given us a peak at some more of the upcoming Ork kits. Enjoy these as many, many grots unwillingly gave their lives for this information.


In addition to the news about the Morkanaught kit, a sample of the e-book how to paint your Morkanaught became available on the iBook store and inside was included an image which detailed several new kits. I have noted the following about the image:


In addition to this we also have a leaked page from White Dwarf which shows the long awaited Flash Gitz kit. I have to say, these guys are getting me really excited about Orks again. The pirate hats and over-sized Snazzguns really embody what it is to be an Ork in the 41st Millenium. As it is Games Workshops penchant to make multi-unit kits it will be interesting to see what these guys can be assembled into, fingers crossed for Kommandos and Tank Bustas! 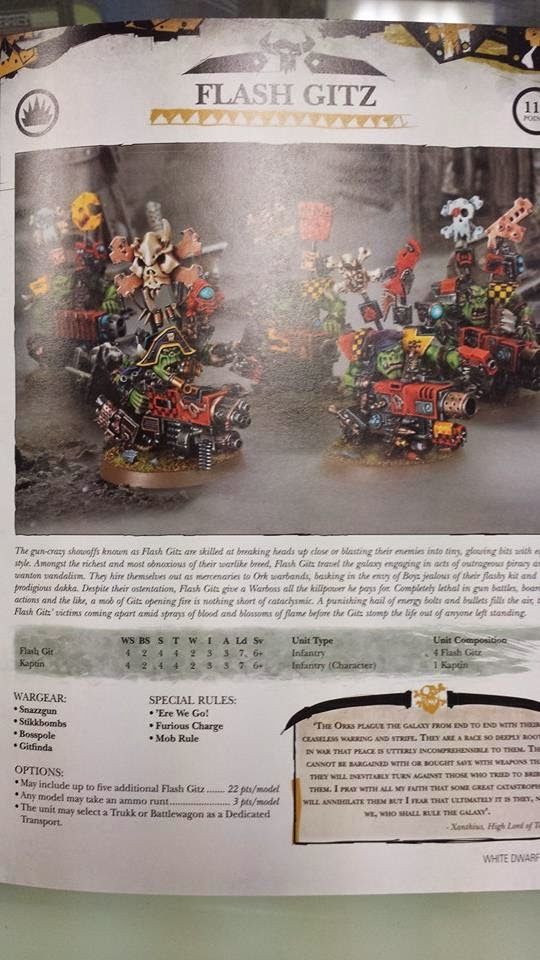 Flash Gitz image couresty of Gorthaur over at Warseer: http://www.warseer.com/forums/showthread.php?394043-Ork-Rumours-MorK-II/page31
By Unknown