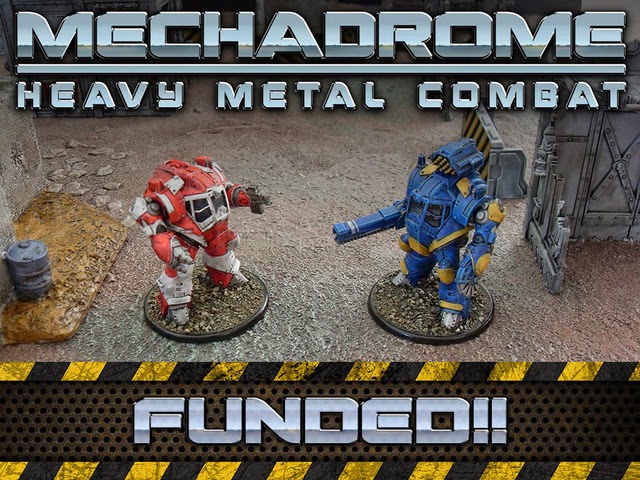 Who doesn't love Mechs? The idea of taking control of a giant walking death machine is sure appeal to many. With recent titles such as Titanfall and Transformers (not strictly mechs but they are big, mechanical and killy) helping to build their fan base it seems to be the perfect time to bring them to the Wargaming table.
This is where Mechadrome comes in, a 28mm tabletop game which pits rival teams of Mechs against each other in an arena style setting. Mechadrome, by Gangfight Games, is currently receiving funding via Kickstarter and I (PH) caught up with Tim Kline (TK) to find out more about the game.


PH: Hi Tim, welcome to Talk Wargaming. Lets begin by getting an overview of your Kickstarter campaign, Mechadrome. What can you tell us about the project?

TK: Mechadrome is a "Gladiator Arena Mech Combat Skirmish Sports Game" where teams of giant robots battle it out every week to bring glory to their home planets on Monday Night Mecha. It's all about big models and big robots and big guns. The game has a lower model count, since the models are so big, and the rules are easy to learn. Most games can be played in an hour or less.


PH: You say that the games are smaller in size and quicker to play, would you say that this was done to appeal to more casual players or those who are new to wargaming?

TK: Yes, definitely. I enjoy big-army games that take 3 hours to play, but the older I get, the less spare time I have. So I purposely designed Mechadrome to be fast and fun and full of carnage. Blackwater Gulch is the same way, in fact both games are using mostly the same rules. I'd rather play 2 or 3 light hearted and fun games in an evening than 1 large game where your nose is in the rulebook half the time.


PH: After reading through your rules, one thing which caught my interest was the ability to fully customise all of your mechs using the Mech Lab. What made you take this decision and how well do you feel it will work in terms of balancing?

TK: I wanted to give players plenty of options. A lot of games come with a set stat line and equipment for each unit, but I want players to feel free to use any weapons and build or convert their models however they want to. But to balance things, you only have a finite amount of points to spend building your mech, so while you may think you'll have an ubermech and max out your ranged combat skill, you may find that doing that makes other important stats like Energy or Power too low to be effective. So you still need to find a good balance. The best weapons require a higher combat skill to use them. Or you can do devastating attacks from above, but booster jets can only be used once per turn. If you have a lot of weapons, you'll need a high Energy attribute to use them effectively. So, there's a pro & con for everything. I'm really looking forward to seeing what kinds of Mechs that the other players come up with, but we'll also be including Pilot Cards with all of our models for the players that just want to dive right into the game and not have to worry about the mech building aspects.


PH: What were your influences in designing the Mechadrome miniatures? Be it intentional or not, I can definitely see an element of Titanfalls ‘Ogre’ in them. 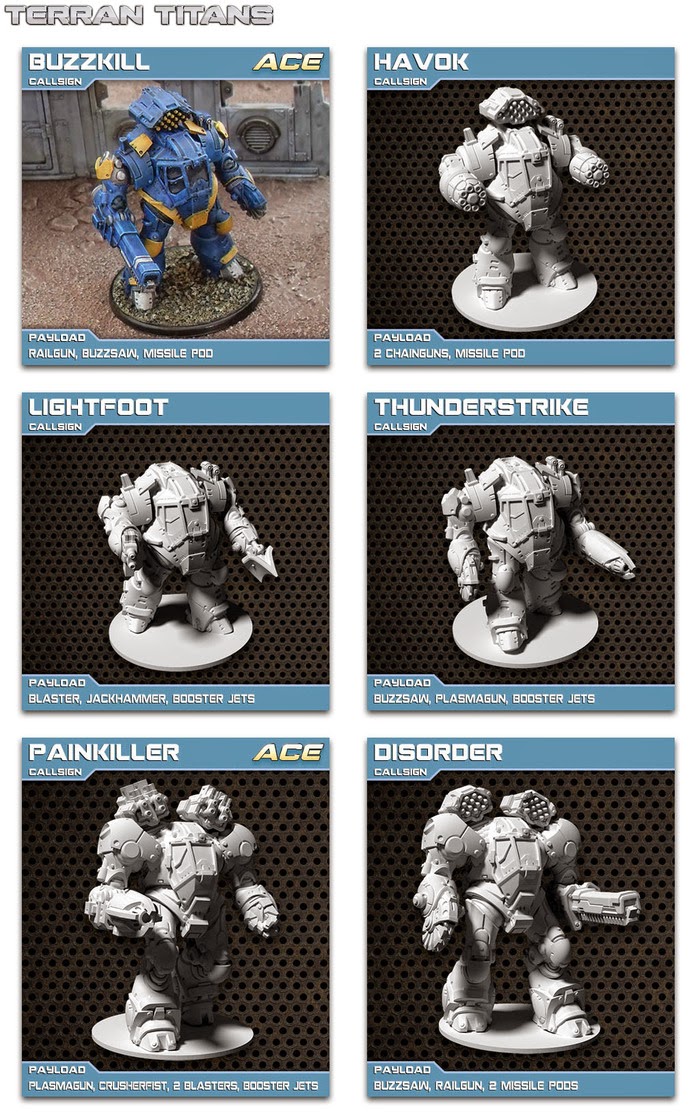 TK: I love Titanfall! But, these mechs were designed over a year ago, so I call the similarities a "happy
accident". Actually we're trying to mix together lots of different mech styles, so you'll see a little bit of Battletech mixed with some Gundam or old Transformers. As the game grows you'll start to see lots of new and more unique mechs making up different races or free agents.


PH: Speaking of the aesthetics, what was reasoning behind opting for the 28mm heroic scale of the Mechs?

TK: The game started as a 15mm scale game. At first, I wanted to have big battles with tons of mechs blowing each other up. I was going to just make a couple of mechs in 28mm scale for the players that wanted them to collect or use for other sci-fi wargames such as Warhammer 40,000. Then, I launched my first Kickstarter campaign and pretty much everyone only wanted the larger mechs, which is why I canceled it and relaunched the campaign focusing just on 28mm models. Personally I love the big models, they look really great and the larger size also shows the details a lot better. As I was painting up the first few samples I was finding lots of little bits I never even noticed on the smaller sized mechs. Now I can't wait to see how the other sculpts come out!


PH: You currently offer the rules for Mechadrome as a free PDF which is unusual for table-top games. What encouraged you to make this decision?

TK: I want people to try out the game first and see if they like it before they invest in it. I don't see any reason why game rules can't be free in this day and age. Many players still want to pay extra for a nice full color rulebook, so we'll be using Print on Demand services for that, while keeping the basic rules online and free forever.


PH: I’m sure that a lot of people will appreciate this ‘try before you buy’ aspect. Lets talk about the forces, you currently offer three factions, Terran Titans, Team Bushido and the Free Agents. Will this be the extent of the range or can we expect to see more?

TK: There will be many teams in Mechadrome. Each new race will bring a new team, and we can easily add new teams based on older Mechs, a lot like how Warhammer 40k has tons of space marines all wearing the same armor, just painted different colors. To start with we thought it would be good to have a more shooty team in the Terran Titans facing off against a melee oriented team like Team Bushido. The Free Agents are not a faction, though, they are solo mechs who can be hired to join any team, for the right price. Most Free Agents will be unique mechs, or they will have a special weapon or upgrade not available to standard mechs


PH: Backing any Kickstarter campaign does carry an some amount of risk. How do you hope to minimise any potential hiccups in delivering your product?

TK: We made a lot of mistakes with our first game, Blackwater Gulch, mostly with not planning far enough in advance. It took longer than expected to get everything sculpted and delivered. With Mechadrome, we hope to avoid that by having most of the initial models sculpted ahead of time, and also setting our ship date far in advance. Also, we intend to keep the campaign small and focused, and not add a lot of stretch goals. We would rather do a series of smaller campaigns and expansions, rather than one huge campaign that takes 2-3 years to fulfill. So, after the rewards from this first campaign are all shipped out, we will be launching a second campaign with even more new Mechs. This first campaign is focusing on getting the rulebook done and releasing the Terran mechs, which are the most common.

If you are interested in getting your hands on some of these great looking Mechs then head over to the Mechadrome Kickstarter Page and pledge your support. The rulebook is also available to download from this page as a free PDF.
By Unknown