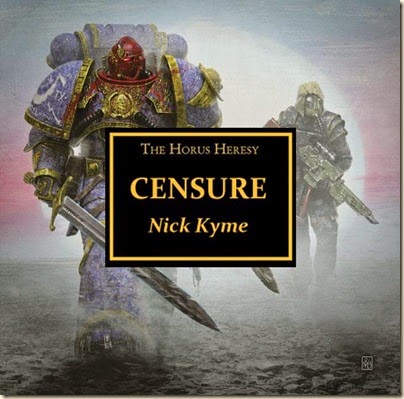 
"A very fun audio-drama with an almost action movie feel to it, distinctive voice acting and a likable cast of well-rounded characters." - Lord of the Night @ Talk Wargaming

Censure is an audio-drama that it took me a long time to get and listen to, and after finally having done so recently I wish that I had gotten it sooner. I very much enjoyed this audio for it's interesting but straight-forward story, characters that think before fighting and the voice acting that really sets them apart from most other BL audio-dramas. I have always liked Nick Kyme's work and Censure is no exception to that, Kyme nicely takes on the popular character Aeonid Thiel from Dan Abnett's Know No Fear and puts him in a story that suits his 'unconventional' talents.


The Underworld War grinds on, the Ultramarines and Word Bearers battle each other on the broken rad-wastes of Calth and in the great tunnels that honeycomb the planet. It is a war of attrition with propaganda as the sole achievable goal, and the Ultramarines are losing it. Without reinforcements, the Ultramarines will soon be destroyed and the Word Bearears free to escape back to their erstwhile Legion. When the maniacal Dark Apostle Kurtha Sedd captures a number of Ultramarines it falls to unconventional Sergeant Aeonid Thiel, once marked for censure and then honored by Guilliman himself, and a single Imperial Army soldier to rescue the Ultramarines, stop Kurtha Sedd and turn the tide of the Underworld War on Calth. It will take a practical like never before to achieve, but Aeonid Thiel has a habit of turning the impossible into possible.

The story is a straight-forward one but remains interesting because it is straight-forward. There's no mystery, no puzzle and no conspiracies to solve. This is simply an adventure story if you will about Aeonid Thiel undertaking a mission on Calth using his flair for unorthodox strategy and his talent for causing trouble. Sometimes the simple is good and this audio falls into that category, it is enjoyable and fun because it is that simple. The tracks were also split with some of them giving a POV to the antagonist, Kurtha Sedd, which made the story more understandable and allowed the reader to understand the opposing motivation and to see where and why certain aspects of the plot actually came from or happened. Really the story has a bit of a light-hearted feel to it at times that comes from the interactions between the two protagonists, which clashed nicely with the grimdark and despair that comes when Calth is described as it was and now as it is and when the real truth about the Underworld War is actually spoken out loud. The story also connects near the end with another Horus Heresy entry, though having read that book before this audio it didn't have the same impact as it would have when the audio was released.

The characters were quite well written and casted. Aeonid Thiel is the same irreverent soldier and unconventional tactician that he was in KNF and he carries that into the Underworld War, fighting as you wouldn't expect an Ultramarine to do and irritating his superiors. I like that we got to see more of Thiel because he really did strike a cord with me in KNF and I think he has become one of the more popular characters in the Heresy, and I think that Kyme did him justice in this audio. Raud, the second protagonist, was a nice match for Thiel in the form of somebody who can fulfill roles that Thiel can't in battle and has a lot in common with him that made for some very nice moments in the story, bonding between human and post-human. The final character, Kurtha Sedd was an interesting look at the Word Bearers on Calth that have realized that they have been abandoned to die and how some of them have dealt with that, through acceptance, denial, redirecting their faith or outright fatalism. Sedd was also competent which was a nice change of pace for a Word Bearer. I would have liked to see a POV for the Word Bearer Kaylock who played a fairly important role in the story, perhaps how he in his unique position viewed everything going on around him, but you can't have it all.


The action scenes are very well done and have a similar style to KNF. The battle scenes don't just tell you what the characters do, they show you what they think, strategize and act. Theoretical, then practical. The battle and fight scenes feel fitting towards the Ultramarines battle codes and their methodical approach to warfare. And of course we get scenes showing Thiel's very unorthodox approach that are a nice contrast with the more orderly battle scenes featuring other Ultramarines. Kyme's fights are clear and understandable while also being very visual, the descriptions really immerse you in the fight, and several times he showed how fighting in the tunnels under Calth required different tactics and weapons than fighting on the surface. I also enjoyed that he used the more unique aspects of fighting that the Word Bearers have no problem utilizing like suicide troops, daemonhosts and sorcery, which is matched by Ultramarine discipline, honor and the teamwork from Thiel and Raud that quite a few of the fight scenes feature.

The pacing of the audio is done nicely. Things start off slowly so that the situation behind Calth can be explained and the listener can be caught up, then things start to happen and the audio's story really picks up. By this time the audio starts to become more fast-paced as Thiel and Raud struggle to survive the hellscape that Calth has become and complete their mission before the captive Ultramarines and civilians can be killed. By the final battle events are coming to a close and we get one last fast-paced burst before the epilogue slows everything down again and we see the end of the story. Kyme keeps things happening in the audio so that the listener is never bogged down in exposition or narration, either conversations between Thiel and Raud or actual story progression. The voice acting was very enjoyable, Thiel and the other Ultramarines having upper-crust British accents made for a very welcome change from the usual gruff and gravely Space Marine voices that BL seems to favour, while Raud's Scottish-sounding accent made him distinct from the rest as a normal human among post-humans. Sedd and the Word Bearers were also a nice change of pace, their voices putting me in mind of the well known fictional character Starscream; soft creamy voices that can seem intelligent but also convey untrustworthiness.

My favourite quote, definitely this one even though it felt a little B-movieish in the way it was spoken;

The ending was enjoyable though admittedly the actual epilogue would have been more interesting and surprising had I actually listened to this audio when it came out and if I had not read a certain Horus Heresy book before I listened to the audio. But the resolution to the story was both exciting and had a rather heartwarming moment of loyalty in it, another moment that shows the gap between human and Astartes isn't as wide as you think. Kyme wraps up the story neatly, this brief look at Calth can be considered part of the growing collection of stories set in the Underworld War but it isn't a prelude to another story, rather just a stand-alone adventure featuring a popular character from the main series. Doesn't make it any less enjoyable for that, though I do hope we see Aeonid Thiel again as he has really grown on me as a character.

For an enjoyable story, well-written and voice-acted characters, and some very good and thematic action scenes I give Censure by Nick Kyme a score of 8.7/10. This is an audio that I would suggest to anybody who enjoyed the Horus Heresy novels Know No Fear and Mark of Calth, it's a side-adventure featuring one character from the former and set in the same vein as the latter. If Nick Kyme's work isn't something you've enjoyed then this probably isn't an audio for you, but you never know you could still enjoy it. I do think that Censure is one of BL's better audio-dramas and is worth listening to even if Nick Kyme isn't an author that does it for you.