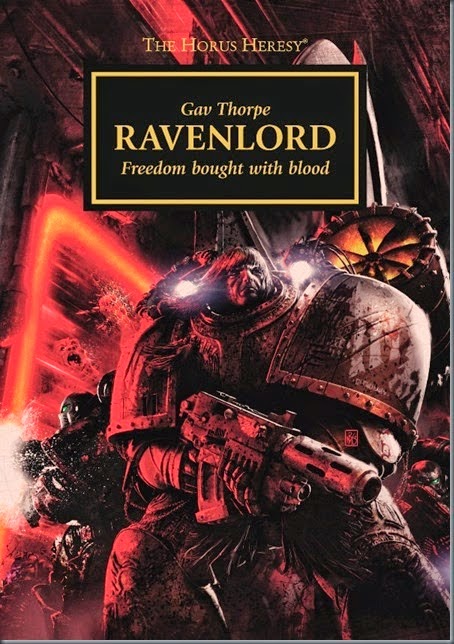 
"An enjoyable sequel with an engaging story, a strong and developed cast of characters, powerful action scenes; all contained in a beautiful matte-black cover. Thorpe's Raven Guard just get better with each release." - Lord of the Night @ Talk Wargaming


Ravenlord is a release that I have been looking forward to reading, and having started and finished it this morning I was quite pleased to find my wait was worthwhile. I found this novella to be one of the best Raven Guard releases for the Horus Heresy series, and I quite enjoyed the continuing story arcs of Corax and the Raven Guard as they fight their guerrilla war against Horus as well as the callbacks in this story to the Raven Guard novel Deliverance Lost. And of course it was filled with lots of ambushes, stealth-warfare and sneak attacks; a nice change of pace from the usual footslogging or shock assault warfare that the rest of the Horus Heresy series uses.


The shadow war rages on. Corvus Corax and his Raven Guard continue to strike at the forces of Warmaster Horus wherever they can, striking from the shadows, retreating to safety and then striking again. Each is a small victory against the seemingly endless armies of traitors arrayed against them, but each victory is a step towards the final end of the war. But martial victory may not be enough as Horus poisons the galaxy with mistrust and paranoia, it will take a moral victory to prove that the spirit of humanity has not been quelled. Carandiru, a prison planet where millions of loyalist Imperials rot in chains, is the perfect target and one whose existence Corax will no longer tolerate. But as survivors and loyalists flock to his banner, Corax must decide who to trust and whether or not anybody can truly trusted in these dark and uncertain times.

The story in Ravenlord continues the arc of Corax and the Raven Guard started in Deliverance Lost and continued in Corax: Soulforge. This is an interesting way to tell a Legion's story over the course of the Heresy, and an expensive one for the fans, but I am quite enjoying it as it allows a larger and more spread-out story to be told, and allows for opportunities to show the Raven Guard engaging in battles across an entire campaign rather than focusing on just one planetary battle. So rather than continuing the same story as Corax: Soulforge and DL, Ravenlord continues the themes of the Raven Guard novels and novellas while telling a separate story. I quite enjoyed this story because it was a chance for the Raven Guard to not only fight with stealth as they do best, but also to explore their freedom-seeking culture and their utter abhorrence of slavers and their belief in the power of a cause, which led to a very stirring speech that I felt very nicely summed up what Corax and the Raven Guard truly believe in. This story featured some nice twists, one of my favourite things about it was that when it came to the main twist in the story, Thorpe did not go for the obvious choice but instead subverted what I expected to have happened and at the same time used it to further the themes of mistrust being the most dangerous weapon that Horus has. I also enjoyed the re-appearance of the Raptors and the little bit of progress that the novella made in their stories. However I think that the story could have been improved by a bit more time being spent on Carandiru rather than building up to it.


The characters are a returning cast for the most part. Corax of course and his commanders from the previous Raven Guard releases, albeit with one new addition, and the Raptors also re-appear which gave the novella a nice foundation to build on. However sadly I think the novella failed to do as only one of the new characters felt important to the story, whereas two new characters appearing in the Dramatis Personae that sounded very interesting and that they would add quite a lot to the story barely appeared, one didn't even have lines. I enjoyed the development of Corax's character through the novella and the idea that his unwillingness to abandon his beliefs is both a strength and a weakness in the Imperium that Horus's rebellion has created. I did like most of that the characters were used to further the themes in the story arc rather than having their own personal stories, which couldn't really be done in a novella that only lasts for a hundred and twenty-five pages, so instead Thorpe focuses on Corax throughout the novella while the other characters actions help direct how his story develops and how his character changes. Only two other characters had stories in the novella and most of those were told through exposition, both characters being similar people who each took a different path and the novella showing where that path has taken them. Ultimately I did enjoy Corax and the two aforementioned secondary characters in the novella and the supporting cast was acceptable, but I think the teasing of non-Raven Guard characters playing a real role in the story and the fact that they were barely used at all was a real letdown. Especially considering what one of them was...

The action scenes were very good and continue the style that Thorpe has used in all his Raven Guard stories, the use of stealth warfare, ambush and rapid strikes, and the unique devices like the Whispercutter and some things that appear for the first time in this story, that set the Raven Guard apart from the rest of the Astartes Legions and makes them fun to read about. Thorpe takes it a step further in the novella by showing a Raven Guard liberation campaign from the initial planning stage all the way to final liberation, looking at the methods they use and the missions they undertake to ensure that all will go according to the plan. The theme of the Raven Guard working with local rebellions is continued here as well and while it may seem a bit similar to the Alpha Legion, I think it works because rather than forming unrest the Raven Guard use what is already there against unjust overlords, rather than just whoever is in charge at the time. My favourite part of the novella was the final fight scene however, I really liked that Thorpe pushed Corax to his limits and brought in opponents that even he had a difficult time defeating, but also made it clear exactly how these opponents were doing so well against Corax and with the clear implication that without those advantages, they would not have done so well at first. It was also a great callback to Deliverance Lost and a call-forward to 40k.

The pacing of the story was well done. The novella starts with a flash-forward to the closing pages of the story to give the reader an idea of what is coming, and then goes back to show how the characters got there and give the reader the full story. Each chapter was nicely numbered with a clock countdown to the novella's main battle and the progress that each chapter made pushed the novella along at a good pace until the final few chapters where things really picked up, the fast pace continuing until the epilogue felt fitting to the rapid strikes the Raven Guard carried out. I read the novella in one sitting and never once felt like putting it down or taking a break during a slow moment, Thorpe kept the plot twists, development and engaging action scenes going in succession and never slowed the novella down, which was a good choice as for the novella to feel worth investing in the story and characters and battles would have to really keep your interest, and a slow pace would prevent that.

My favourite quote; a few come to mind but one is far too long so I will go for the second one because of the context and especially what followed;


"Time to find out how well the Emperor really made you."

The ending was interesting, the resolution to the Carandiru plot and the furthering of Corax's character arc over the novella trilogy made for an interesting few scenes, especially the revelations about the secrets being kept by certain characters. I very much liked how both of the important secondary characters' stories ended, the parallels between the two of them and how their stories affected Corax as a character. Other then that the ending was much as I expected, although the epilogue that dealt with one final plot strand in the novella and showed the thin line the Raven Guard have been walking since Deliverance Lost and how easy it would be for them to fall if they are not careful.

For an enjoyable story with very good action scenes and some surprising plot twists I give Ravenlord a score of 7.8/10. This is one of the better Limited Edition novellas that Black Library have released, and I think that if any of the Raven Guard stories that have been released could have been a full novel, this one could have. But it's still a pretty good novella that despite some flaws and some elements that really should have been used much more than they were, and I would suggest this is a story worth reading for those who have enjoyed the Raven Guard's story over the course of the Horus Heresy series, even if you wait for it to be released generally rather than reading the Limited Edition like I did. Though you'll miss out on the beautiful cover under the dust-jacket.