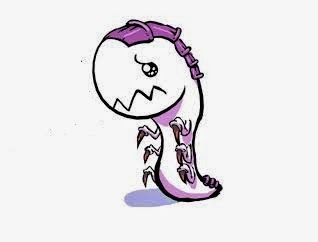 Honestly I'm not sure what Tyranids did to the Games Workshop design team but they certainly seem to hate us.

Flying Monstrous Creatures. All. The. Sadness.

First up the massive nerf to Vector Strikes. Vector Strikes against ground targets have been reduced from D3+1 Hits to a single Hit. Just one. Against Zooming Flyers and FMC in Swoop Mode its now D3. This is a huge nerf to Crones, but also really sucks for close combat build Flyrants since they can't even savage things well on the way to the fight.

Combined with this FMC can no longer charge on a turn that they changed Flight Modes, which means no zipping forward Turn 1 and charging Turn 2. It's either a Turn 3 charge at best or staying in Gliding Mode to leap forward, which just got deadlier because...

On the plus side they are now AP2, so you can kill one Terminator, maybe, if he fails his Invulnerable at least. Sigh.

Don't know what else to say there, the concept of area terrain has simply been removed. Which means Monstrous Creatures require 25% obscurement at all times, something that can potentially be very difficult, especially for Crones and Harpies.

But Hey, What About That Psychic Phase?

The changes to the Psychic Phase are, mostly, a lateral move for Tyranids. Sure we get Dominion for free on, well, everything, but we no longer can cast nearly all our powers with each Psyker (something that was fairly reliable before) since casting will require more dice. I'll need to play a bunch of games but I do think that, offensively, we got a boost (Flyrants with dual Devourers can now still fire witchfire powers, and at different targets to boot, Zoanthropes can cast Warp Lance and other powers as well), but defensively a nerf (if you got Catalyst on everything you aren't getting to cast with all of them, you won't have the dice). so like I said, bit of a lateral move instead of a buff or nerf.

This is completely overshadowed by the fact that...

Shadow In The Warp Does Next To Nothing Now.

Sure maybe that -3 Ld on a Psyker might mean that IF they perils, and IF they roll a result that requires a Ld test they are SLIGHTLY more likely to fail it, but that's it.

The Hits Just Keep On Coming- Oh Wait, They Stopped. No More Hits For You.
Smash attacks now set you at 1 attack, instead of halving your attacks, which means that vehicles just got a LOT harder to kill, since with the new damage chart you'll still need a '6' to blow it up, even with AP2, and with only 1 attack you certainly aren't stripping away Hull Points.

Remember that, as a 'set value modifier' (pg. 8, Multiple Modifiers) Smash now prevents you from gaining any extra attacks from other rules. No +1A from Charging or having two sets of Scything Talons.

I don't even know why the Trygon exists anymore. If I were that guy I'd pack my bags and leave. Hop a bus to San Fransisco and start my new life as a street busker.

EDIT: As was pointed out by Mark in the comments, the changes to Smash are good for the game in general, it brings Walkers back up in stature, but it's still a punishing move for Tyranids, who mostly relied on Smash to kill vehicles.

Oh By The Way, What's The Point Of The Tervigon Now?

Since all of everything now scores (even swarms, a huge boon to you die-hard Ripper fans) the Tervigon, already hit hard by the nerf-bat, seems to have become largely irrelevant.

Ways To Mitigate The Bullsh*t.

We can make cover go back to what it was simply by assigning Battlefield Terrain datasheets to absolutely everything on the board! Is there a forest? Now its a Twisted Copse, 5+ Cover regardless of Obscurement. Is it just general battlefield debris and detritus of indeterminate nature, the stuff you would have called Area Terrain before? Well now it's a Battlescape! 5+ Cover regardless of Obscurement again!

Nothing really to be done about the constant nerfs to close combat builds. They weren't viable before and they certainly aren't now. I can see Dakkafexes getting more popular again (as if they weren't already), four Strength 9 attacks plus Hammer of Wrath (which now hits the facing you charged btw) is really our only bet for trashing vehicles at this point, while still being able to put out some hurt with the Devourers while they saunter up the board.

Zoanthropes are pretty good anti-vehicle too, I guess, but with all the layers of defence they still aren't highly accurate and without Spore Pods they still suffer from horrendous mobility issues. They can run in the shooting phase now, even if they fired Warp Blast in the Psychic, so that will help a bit.

We can recover, somewhat, from the loss of a useful Shadow in the Warp by spamming single model Zoanthrope broods to maximize our Deny The Witch dice. Sadly that's a trick a lot of other Codex can pull too so I wouldn't count on it too much.

Move Through Cover means we aren't slowed by charging into terrain at anymore, which is nice, except we still strike at Init 1, which makes no sense.

Allies, All The Allies!

The biggest (only?) boon that Tyranids gained was actually the ability to take Allies now! I dunno about you guys but all of my armies are going to be Nid-Crons now! A normal Necron army plus a full smattering of whatever Tyranid Monstrous Creatures I feel like spamming, hooray!

EDIT: I was lax and failed to mention that Grounding Tests have moved from the To-Hit, to successful To-Wound, and only 1 per phase per creature at the end, so our FMC's are actually a lot harder to bounce face first into the ground. That right there is a buff to a shooting build. A close combat build might actually want to get grounded now since it will let you charge in your next turn. Oi vey.
By Jesse Sinclair