I recently got my hands on Storm of Vengeance, the latest game based on the Warhammer franchise. I have been playing it over the last few days so let me share my thoughts on the game.


The game was developed by Eutechnyx and was released on the 3rd April 2014 for both PC and mobile formats. The game depicts the battle of Piscina IVand features two iconic characters Master Belial of the Dark Angels and Warlord Ghazghkull Thraka. It is a lane based RTS which pitches Orks vs Dark Angels, allowing you to choose to fight with either. 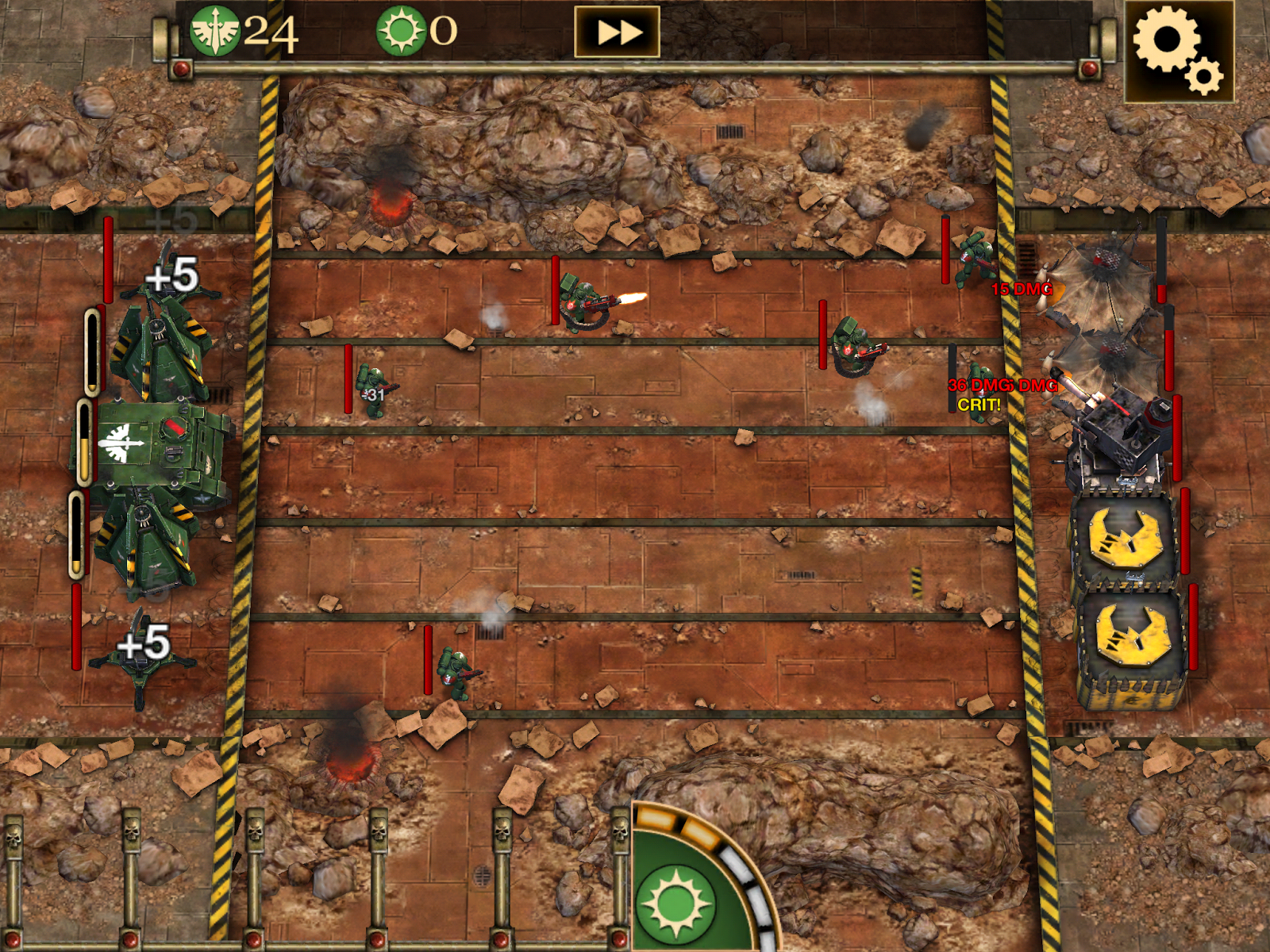 The game itself is based around 5 lanes, each with a structure at either end. You control one side, your enemy controls the other. The structures you can build allow you to generate an energy resource or unit cards. Space Marines generate Redemption while Orks generate Teef. When a card has been generated you can spend the energy resource to deploy it to a lane. The aim is to reach the enemies side of the field and destroy at least 3 of their structures to win. All the while your opponent is trying to the same thing. This means that you must balance your assault with the defense of your own structures. In addition to the standard battle mode, there is a Skirmish mode. In this you will not generate resources or units, instead you will be given a finite number of cards. These will then need to be used against a wave of opponents. The goal of which is to wipe out every opponent. Each of these battles takes place within a larger campaign complete with optional side missions which will reward you with additional experience upon completion. These mission are chosen from the a campaign map of sorts with each 'stage' being broken down into days.

There is also an experience system which will allow you to purchase upgrades with skill points earned from leveling up. The upgrades are split into two groups, Battlefield Skills and HQ Skills. Battlefield skills are applied in the game and can be toggled on or off. These upgrades grant you access to new units, such as devastators or assault marines. They will also unlock individual unit upgrades which will improve their capabilities whilst also increasing their cost and time to produce. HQ Skills on the other hand are passive, allowing to unlock additional special abilities or increasing the number of upgrades a single unit can have. There is also an additional game-play mechanic which involves special abilities. These range from spawning special units, redeploying forces or even summoning Gazghull Thraka or Captain Belial. These special abilities must be unlocked by spending skill points earned through leveling. These special abilities expend a secondary resource when used, Resolve for Dark Angels and Psychic for the Orks. This secondary resource is generated by generated through combat or more quickly by sacrificing unit generation of one of your structures. When activated these abilities require a cool down period before they can be used again.

Unfortunately I think that a lot of 40k fans will be disappointed by Storm of Vengeance, it just feels like a bad Plants vs Zombies rip off with a Warhammer 40k re-skin. The game-play is depressingly bland, the missions are repetitive and offer little in the way of variation. Most of the game will be spent watching progress bars fill up and as a result you will often find yourself zipping through on double speed just to liven up the pace.
Compared to other Warhammer mobile games such as Warhammer Quest and Space Hulk this just feels basic. Little strategy or forethought is needed, which is OK for the casual gamer but the Warhammer playing audience will be looking for something a little more challenging. There is a multiplayer mode which does change things up a little but falls short at rescuing an other wise dull game.

The graphics aren't bad, the units and vehicles (which are relegated to unit producers) have been carefully reproduced to match their miniature counterparts. I do get the impression that a disproportionate amount of effort was poured into the aesthetics while the game-play was just a side note. Its tolerable if you're a casual player or you are just looking for something to pass a few minutes on the train or bus. If you are more of a hardcore gamer or 40k fan you're probably best just steering clear of Storm of Vengeance. Your money will be put to much better use buying some DLC for Quest or Space Hulk.