Take heed Mortals! It is I, Pimpcron here to upload some information into your optical ports! Now in my Dynasty, playing games is punishable by death. But we all know how you humans love to get together and play goal oriented tests of luck and skill, in hopes of being deemed the “Winner”.

Sometimes you may find an innocent, naïve, new person walk into your game store showing a mix of wide-eyed terror and nervous caution at what they see. Usually that would describe a female of your species that accidentally stumbled into the wrong store, but sometimes it’s a new potential player! And unless you only hold Solitaire and Mahjong leagues at your store, you should always be excited for possible new players. When running a demo for a Game That Does Everything It Can Not To Be Played, how do you keep from scaring off these new people?

Don’t play more than 1000 points for a demo because things get too messy and the player may lose interest as time drags on. I find that a 500 or 750 point game is ideal for demos. Also, don’t include any special combos or stack abilities.

“When I attach my Librarian Dickheadicusmaximus (from my new supplement Lords of Cheese) to my full unit of Heavy Imperial Asshats, it gives me a re-rollable 2+ Invul with a 4+ FNP and they already have It Will Not Die, so as you can see-“ [Entrance door slams shut as the new player flees in confused terror.]

They aren’t training for the Astartes Olympics; they want an idea of how the game plays. So stick to a few small units of troops, and pepper in a few (I SAID FEW!) special things. Like a small unit of deffkoptas, or a bike squad, one (ONE!) carnifex, etc. Just make sure that their army has something to deal with everything you will be bringing. The last thing you want to do is drown them in a highly technical army list when they are still attached to the metaphorical gaming teat.

Ask them what army looks the coolest to them and what they think their play style is. Give your new player something to look at like a codex while you secretively make army lists for both sides. It is usually best for you to play a swarm-type army with lots of cheap models such as Orks, Tyranids or Guard. Give them a simple and sturdy army such as space marines. The reason for this is that a new player will look at the model count and think the sides are even. Even though we all know there is a good point (and ability) difference between a Tac Marine and a Guant, they look roughly the same size on the board.

Again, don’t drown them in a bunch of information; be it fluff or rules. Let them move some models and rolls a lot of dice; people generally like rolling lots of dice. Gloss over some parts of the game such as the details of special rules; just tell them when a special rule applies. You don’t to go into whole “Seven minus your ballistic skill is what you need to roll or higher” thing. Just tell them what they need to roll or higher. “Your army is better at shooting; so they need a 3+ to hit. Mine isn’t as good at shooting, but generally gets more shots.” Humans have a huge capacity for learning just like they do for eating, but they just can’t take it all in at one time. You will be able to see their eyes actually glaze over if you start talking technical; very similar to the glossy look they’d have as you pour a bucket of pasta down their throat. (I hung out with some Dark Eldar in my teen years; they were into some weird stuff.)

If things don’t go quite as planned in the dice rolling department (The new player is Jimmy “All Ones” Smith), you may want to tweak the game in their favor. Go over to my other article Cheating to Lose - Simple Tips for Creating Epic Casual Games to learn some subtle ways of tweaking the game’s difficulty mid-match without letting them know. This will ensure a really fun game for them that will appear like beginner’s luck. 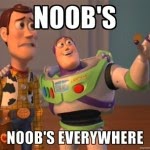 Did I Mention Make Them Win?

Make them win. What was that? Yes, make sure the new guy wins. It greatly increases the chances that you will spark his interest. Then he will quickly drown in financial debt like the rest of us to fill an empty corner of his soul with tiny plastic people. But hey, you just caught yourself a new player!
By Pimpcron