The purpose of this week’s Malifaux article is to go over the basic rules of the game, so that new players can get a good idea on how it plays. If your just tuning in, we've so far covered the background and each faction available. 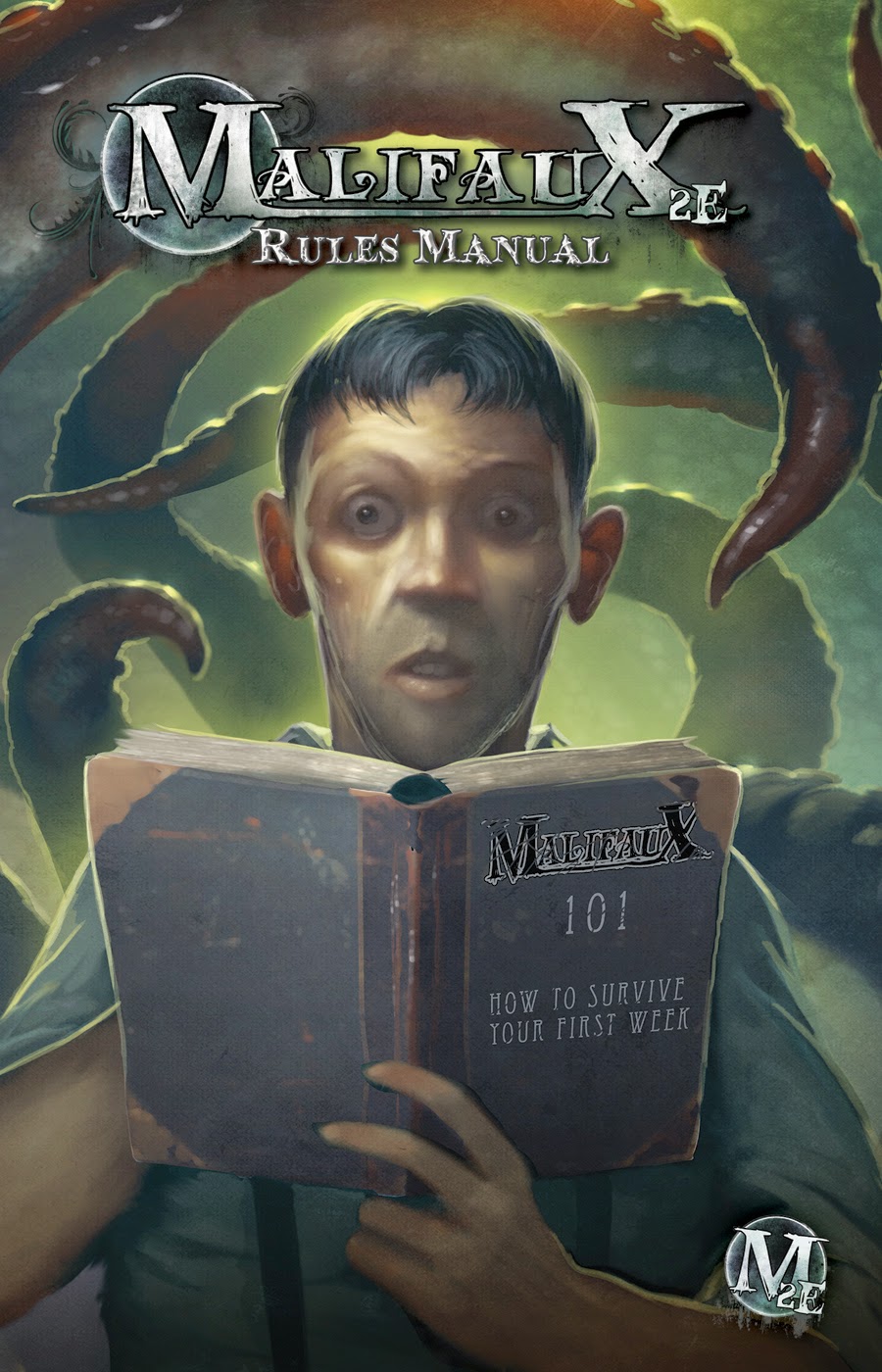 
Malifaux is a skirmish game, meaning every model operates individually as it's own unit. The game generally lasts 5 turns, and for every turn a player activates each model and generates victory points (VPs). Model activation is an ‘I go, you go, I go, you go’ pattern, rather than a player activating his entire crew, then the other player doing the same. This makes the early activations quite important, as you could have a model in a really crucial position that needs to activate before the enemy models surrounding it.

During it’s activation, every model has action points (APs) to spend on various things. Masters have 3, most other ‘normal’ models have 2. These actions could be a combination of walking, attacking in melee, shooting, casting a spell, interacting etc. Some actions you simply complete (such as walking or interacting), but other actions will require a duel of some kind, for instance casting a spell or attacking the enemy.

Whatever duel you choose will have the relevant stats listed with it on the model’s stat card, which will tell you everything you need to do to complete the action. Lets say a Guild Guard is on patrol and wants to shoot a Mindless Zombie who’s wandered a little too far from the graveyard. The shot has an attack value of 4, a range of 12”, and it can be resisted by the Zombie’s defense of 2. Both players would flip a card from their fate deck (yes, Malifaux uses cards, not dice!) and add the relevant stat value to their attack (for the Guild Guard) or defense (for the Zombie). Let’s say that the Guild Guard flipped a 7, resulting in a total attack value of 11 (7 + attack of 4 = 11). The Zombie flipped a 6, resulting in a total defense value of 8 (6 + defense of 2 = 8). For the action to be succesful, the Guild Guard’s attack total must draw with or be greater than the defense of the Zombie. In this instance, it is, so the shot would get through.

However, starting with the losing player, both players have the chance to cheat fate. Every turn, players draw a hand of 6 cards to use on actions of their choice, so that they can manipulate the actions you really want to go your way. To cheat fate, you simply play a card from your hand that replaces the card you flipped. You can’t cheat every card flip, but it’s a massive bonus to have a really nice hand. To continue our example, the defending player really wants his Zombie to survive, so he replaces his flipped 6 with a 10 from his hand, bringing the total defense value to 12 (thus beating the Guild Guard). Just as determined, the attacking player does the same, replacing the Guild Guard’s flipped card with a 9 from his hand, bringing the total attack value to 13. Guild Guard 13, Zombie 12, so Guild Guard wins by 1.

The attacking player would now flip more cards to determine the damage dealt to the Zombie. The Guard’s pistol has a damage value of 1 / 3 / 4. Each number represents what card is flipped for damage. If you flip a 1-5 from your deck, this would inflict weak damage of 1 wound. A 6-10 inflicts moderate damage of 3, and 11-13 (Jack, Queen, Joker) inflicts severe of 4 wounds. Unfortunately for the Guardsman, he only flips a 4. The Zombie is dealt 1 wound, but has 2 wounds remaining, so he keeps coming!

The above process is a simplified example of 1 action for the Guild Guard, a ranged attack. He would still have 1 action left, which he could use to shoot again, move back, or complete any other special actions he may have access to.

During the game, there are also fate modifiers which can effect the likelihood of a successful action. These take place in the form of negative or positive flips in addition to your existing flip. For instance, if our Zombie was in cover whilst he was being shot at, the Guild Guard receives 1 negative flip to his attack action. He would flip 2 cards (1 for normal, 1 more for the negative flip) and must choose the lowest value of the two! What’s more, on a negative flip, you cannot cheat fate, so would be unable to replace a flipped card with one from his hand! These fate modifiers can take place across many different actions, including damage dealt. On the other hand, if the Guild Guard had a positive fate modifier (for instance, he spent 2 AP to make a focused shot), he would flip 2 cards and take the highest, and he can cheat fate with a card from his hand as well. You’ll always know when to use fate modifiers, as most of the time a model has them listed in their stats. Some game effects dictate when to apply a fate modifier also, such as cover or a defensive stance.

Now I haven’t gone into everything there, as it’s only an introduction for those of you that haven’t played Malifaux. Triggers, for instance, are additional effects that take place as a result of a successful action (as well as any damage), and these require a particular suit from your fate deck. Again, these effects are specific to the model, and are listed on their stat cards. For example, a model might be able to poison an enemy if you use the Crow suit during your attack.

Soulstones are the powerful, magical stones that can be used to manipulate your actions further. Every player can have access to them during the encounter, but are a one-use only kind of deal. Only Masters and Henchman (Lieutenants) can use them, and they can really benefit you by reducing damage, giving you positive fate modifiers, specific suits to your fate deck flips etc.

Then the jokers. There are two jokers in the deck, red and black. If you flip a red joker, it has a value of 14 (the highest) and can be a suit of your choice. For damage, it inflicts severe and weak, and it’s the only time you can use a higher card if you have a negative fate modifier. If you flip a black joker, it sucks! Black jokers must always be used (even if you flip a red joker too) and have a value of 0. Telling you now, if you draw a red joker when drawing your hand of 6 at the start of the turn, it’s the best thing ever! If you draw a black joker, at least it can’t come out later in the turn!


Onto the game as a whole now. Before you start the game, you and your opponent agree to play either a Standard Encounter or Story Encounter. Standard Encounters give you a choice of 5 symmetrical Strategies for the battle, and a card flip is used to determine which (similar to rolling a D6 when choosing your mission from the 40k rulebook). These are best if you're interested in balance and competition. Story Encounters are quite different. This time there’s 14 choices of asymmetrical Strategies involving attackers and defenders. They are great for narrative type battles with Strategies like Jail Break, Turf War, Escort, Supply Wagon, Sabotage etc.

You then choose 2 Schemes. Schemes are essentially secondary objectives. The choice with these is much greater, and each player can choose their own. You can decide to announce the Schemes to your opponent (for more VPs, or mind games!), or keep them a secret. Schemes are actually really fun, as you can bluff your opponent into thinking your going for a particular scheme whilst trying to figure out their own! Example Schemes are Bodyguard (keep a particular model alive), Assassinate (Slay The Warlord), Breakthrough (Linebreaker), Take Prisoner, Outflank, Protect Territory etc.

Once you know the Strategies and Schemes, you then select your army afterwards. All you have to do beforehand is declare which faction you’re using. This allows you to take the models to suit the mission. Alternatively, if your more of a casual player, there's no problem taking a themed crew or your favourite models for most of the Encounters.

So that’s the basics for the overall aim of the game, and how the models interact during it. Obviously this is a simplified version. The game also incorporates Horror Duels (morale), summoning models and resurrecting the dead, manipulating the actions of enemy models, buffing your own models with spells and abilities, all kinds of stuff. Next week though, we’ll start to look at getting into the game proper for those of you that are interested in what you’ve read so far. The good news is, Malifaux is relatively cheap and easy to get started in. See you next week for the details...
By Elliot