If you are just tuning in, you can find a general introduction to Malifaux here.

This week we are going to look at the factions of Malifaux. Unlike 40k where you write a specific army list to play all games, Malifaux gives you a lot more flexibility. You simply nominate which faction you are going to play, then determine which models to use after you find out the strategy and schemes you will be playing. Every faction gives you the tools to complete all missions, and typically neither faction is stronger nor more competitive than the other (compared to certain tabletop games of late!) Instead, every faction has a specific flavour or play style. This article will give a brief overview of each. I’ll talk about some important Masters for the background, and some for the new players to start with. There are of course a load more Masters available.

They would have to come first. When humans re-colonised Malifaux (during the second opening of the Breach), it was under the Guild’s banner. The Guild is the powerful organisation that runs Malifaux. They create the law, they enforce it, and anyone who doesn’t like it gets locked up, or a bullet to the face; There’s no doubt about it, they rule with an iron fist. The Guild protect the ordinary citizens of Malifaux from the evils in the dark, but they also restrict the freedoms and opportunities that Malifaux provides. Are they the good guys, or just keeping things running smoothly to maintain the soulstone production and line the pockets of the wealthy and powerful? Definitely a good faction to start with for beginners. They play relatively straightforward with firepower and melee attacks to get the job done. They are a military force through and through, without many complicated rules to confuse things.


As the Guild is such a large organisation, they have different departments that ‘specialise’ in different threats. The most famous of these is Lady Justice and the Death Marshals. Lady J is arguably the poster child for Malifaux. She’s a blind swordsman with a stubborn attitude, and a black and white view of everything. She disposes of all evils and wrongdoers swiftly and efficiently - with a swipe of her greatsword. Her crew of Death Marshals back her up with pistols and an equally grim attitude! Their specialist duty would involve dealing with the Undead that plagues Malifaux. Playing this crew gives you a highly offensive melee master backed up by capable Marshals. 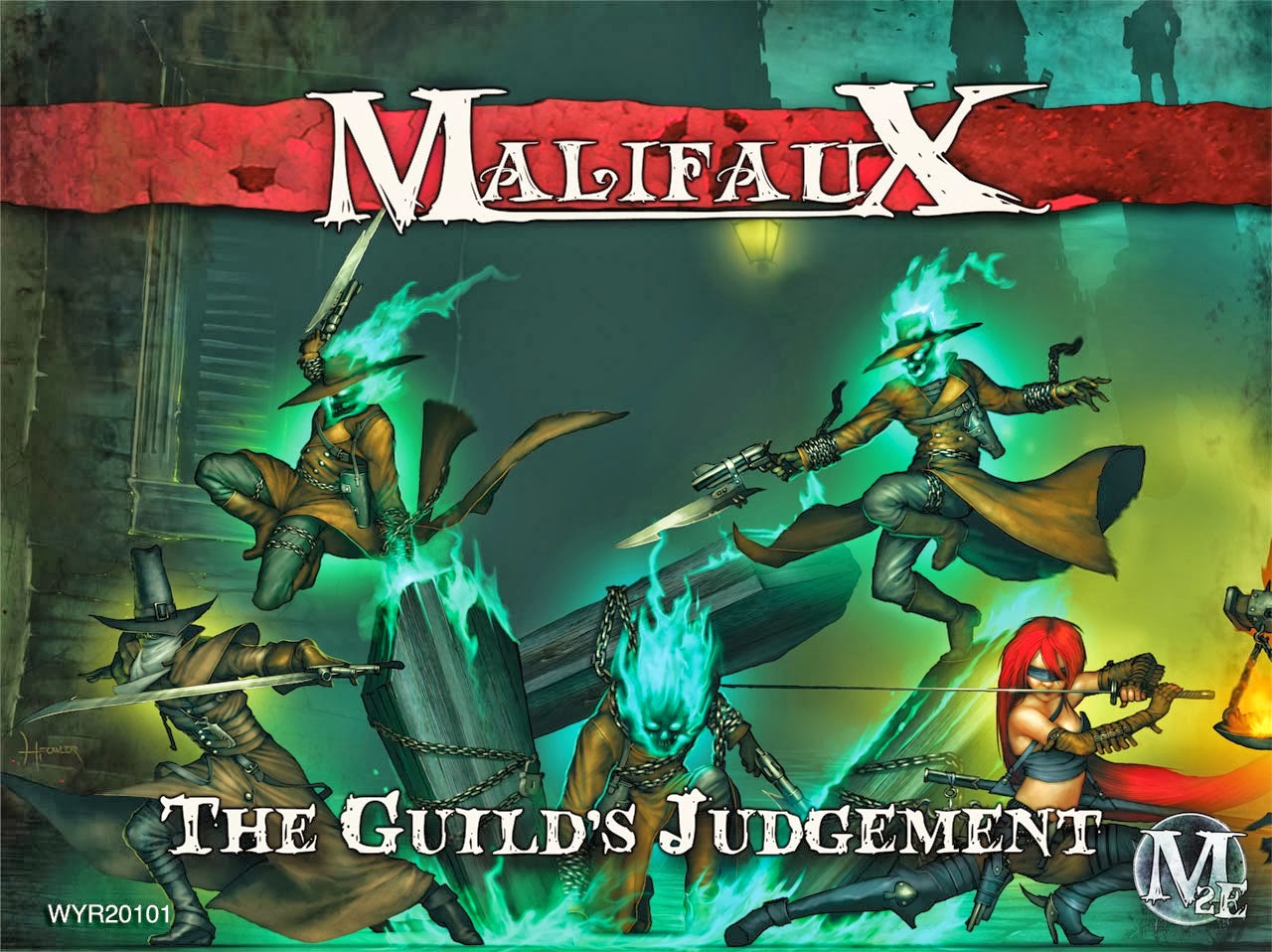 Lady Justice, Judge and her Death Marshals. Dark and secretive, only the most capable Guild Guardsman make it into her elite order. 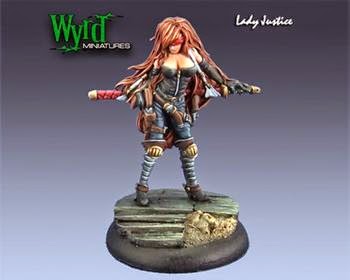 1st edition Lady Justice. Every master has been updated over the last few months during Malifaux's 2nd edition wave, so that all models are now released as plastic with an updated image. One thing's for sure, I'll be playing my Lady J with this sculpt. It's pretty much this model alone that made me get into Malifaux. It's a stunning sculpt...

After that, you have gunslinger girl Perdita Ortega. The Ortegas are a spanish family contracted by the Guild to hunt down the Neverborn (Malifaux’s natives, a scary bunch of monsters!). Backed up by her extended family, the Ortegas are all about the bang bang, wild west quick-draws a-plenty! They also have great synergy when working together. 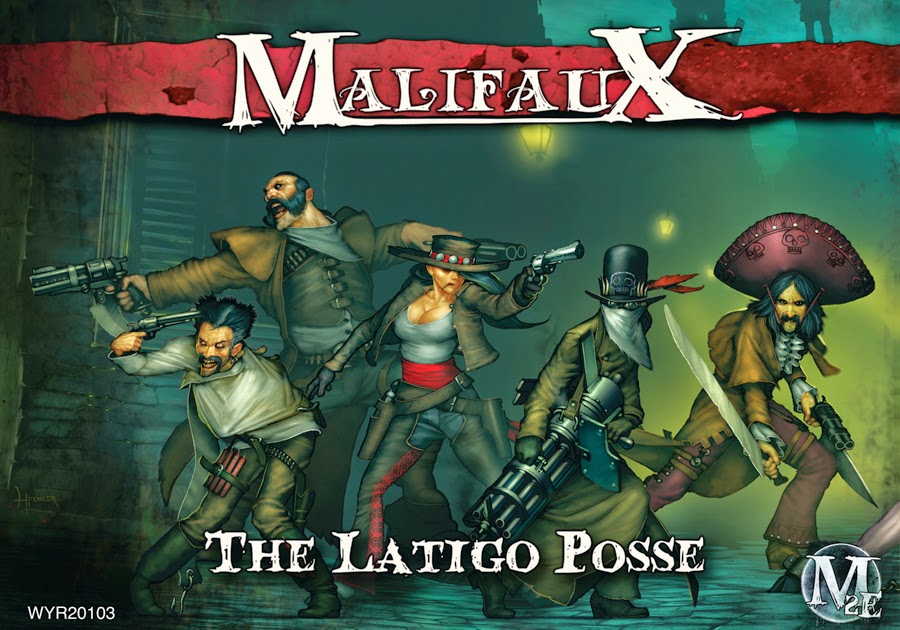 From right to left, Francisco the duelist (Perdita's elder brother), Nino the Marksman with his Repeating Rifle, Perdita herself, Santiago who's pretty much a tank, and Papa Loco who should be in a psychiatric ward, but instead they've given him a few sticks of dynamite!

Finally you have Sonnia Criid. The Guild master that the Malifaux populace hates, Sonnia is a witch-hunter. The use of magic and spellcasting is forbidden in Malifaux (reduces the soulstones for exports, perhaps?!), and mistress Criid and her crew enforce this pretty brutally. As a master of fire, she uses magic herself to hunt down rogue Arcanists (spell-casters). Such a job has given her pretty bad press from the citizens of Malifaux, so she has taken to wearing an iron mask to protect her identity. One thing is clear though; not all who practice magic do so for the right reasons, and an un-trained mage can cause serious collateral damage. Sonnia Criid would tell you her role is a necessary evil… 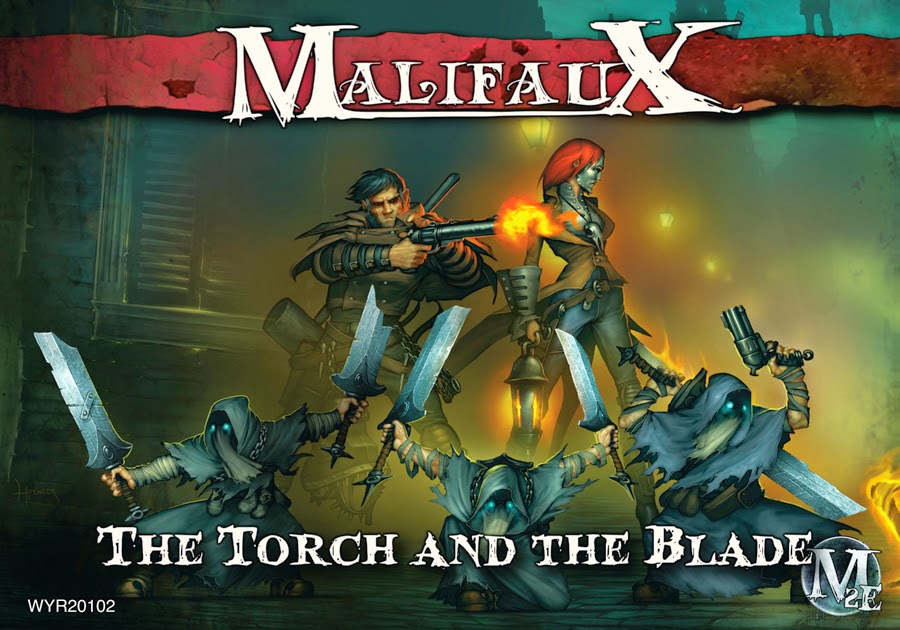 Any rogue spellcasters that Sonnia or her lieutenant Samael Hopkins catch suffer the unfortunate fate of being turned to Witchling Stalkers. Stripped of their will and identities, they are mere wisps of their former selves who's only remaining purpose is to hunt down their own kind under Sonnia's command.

The Arcanists are the underground resistance in Malifaux. Many of them are spell-casters and mages, and they are fighting a war against the Guild to return power and freedom to the populace. They also have close ties to the Miners and Steamfitters Union (M&SU). The Guild control the industry in Malifaux, but it’s the M&SU that are providing the labour. This creates an extremely volatile situation. The M&SU provide safehouses for the Arcanists, and both work together to sabotage the Guild’s efforts to rule over Malifaux. Most of the Masters in this crew are spellcasters in both offensive and support capacities. If Mages are your thing, then Arcanists are the way to go. If you like the underground rebellion flavour of the Arcanists, tune in tomorrow for Mei Feng (a dual faction Master), or hang on for some of the 2nd wave models that will be released later this year: Colette, Kaeris and a new Master named Ironsides.

Victor Ramos is leader of both the Arcanists and the M&SU. An undeniable genius, he uses magic and mechanical knowledge to many ends. The architect of countless ventures into science, infrastructure, transport, mining and power, he is an extremely powerful figure in Malifaux. When he needs to get his hands dirty, he’ll bring forth an arsenal of Steampunk constructs supported by his own spell-casting to get the job done. 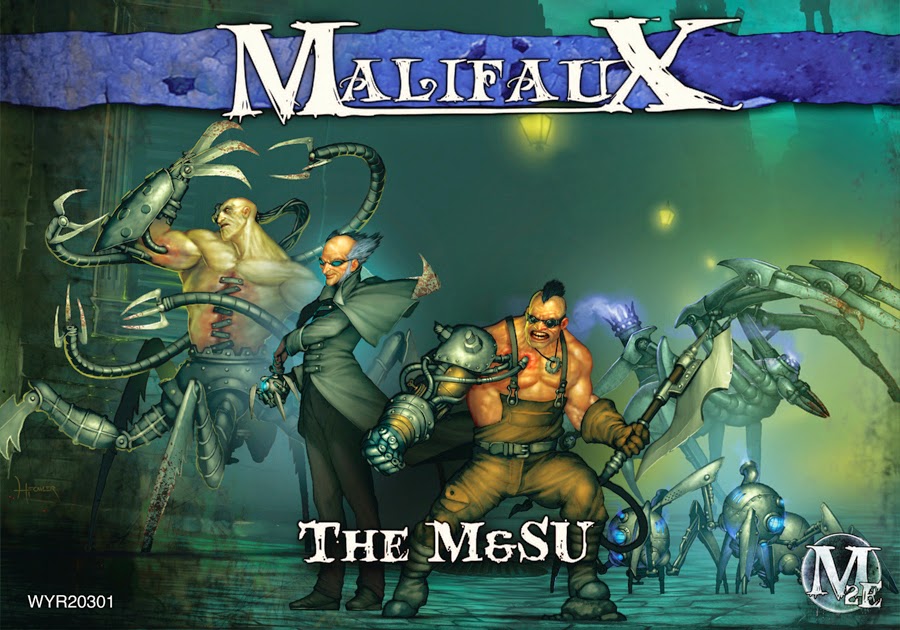 Ramos and his right hand Joss, accompanied by all manner of Arachnid constructs.

Rasputina is Malifaux’s Ice Queen. An unspeakable crime meant she had to serve her sentence through The Breach. After initially being forced into Malifaux’s brothels, they soon realised she wouldn’t co-operate, so they sent her to the labour camps in the mountains to break her will. It was here that Rasputina rose from a nobody, to one of the most powerful spell-casters. She became associated with the entity known as December, who granted her the power to control forces of nature; blizzards, raging winds, sleet, ice… all answer her call. Rasputina is an offensive spell-caster that uses a crew of durable ice elementals to support her whilst she lays the smackdown from afar. 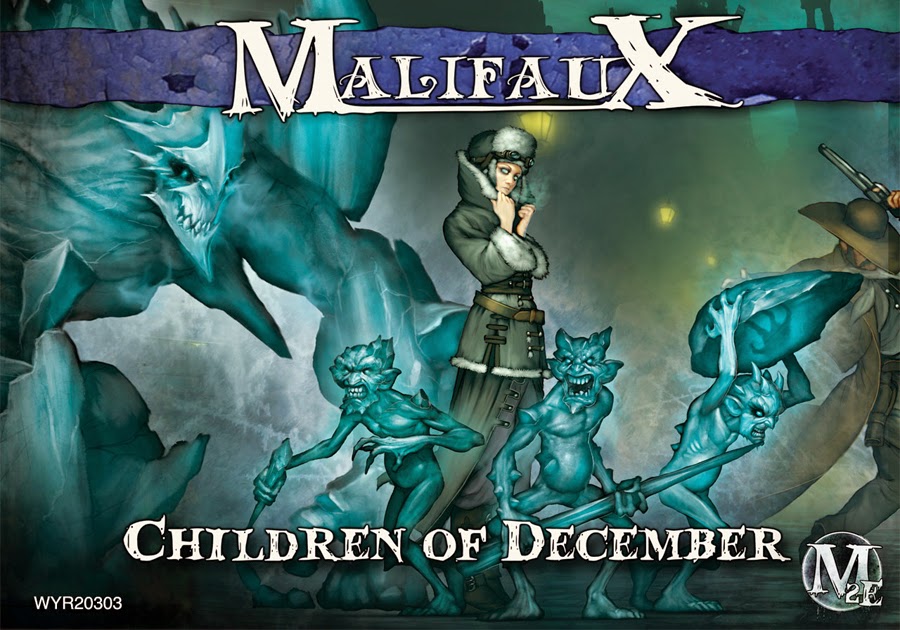 Rasputina, her Ice Gamin and the huge Ice Golem.

The Neverborn are Malifaux’s native population loosely allied to fight against those invading their homeland. They come in many different forms, but essentially they are all creatures of the dark. Monsters and Nightmares, they feed on fear and flesh. Malifaux is a warped version of Earth, and many of these creatures are in the same light. A teddy-bear with teeth, Pandora and her box of sorrows, shapeshifters, demons, poltergeists... you get the picture. The Neverborn aren’t the easiest crew to play with, as they have specific play styles and weaknesses. If you play them right though, they can be downright nasty!

Lilith is the Mother of Monsters, leader of the Nephilim, the most common of the Neverborn. The Nephilim are demons who vary in size and power. They wage a guerilla war with the humans to take back their homeland. Many a caravan outside of Malifaux’s city limits have been ambushed by these creatures. Lilith and her crew are an out and out melee crew that use speed and offensive output to win the battle. However, they have little ranged support and defense, so they can be a bit of a glass cannon. 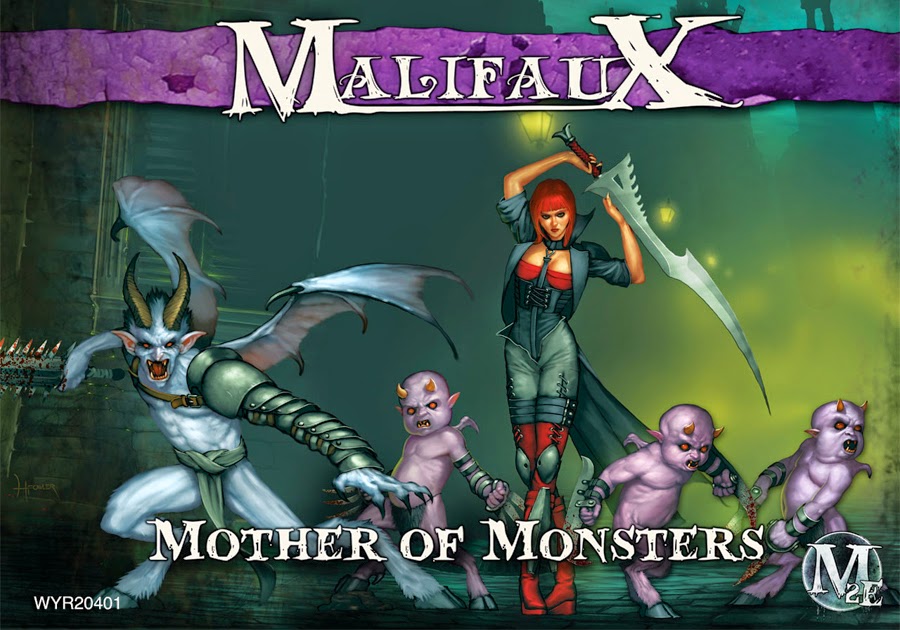 Her starter box set comes with Barbaros (a Nephilim captain) and Terror Tots, but Nephilim come in much greater sizes... 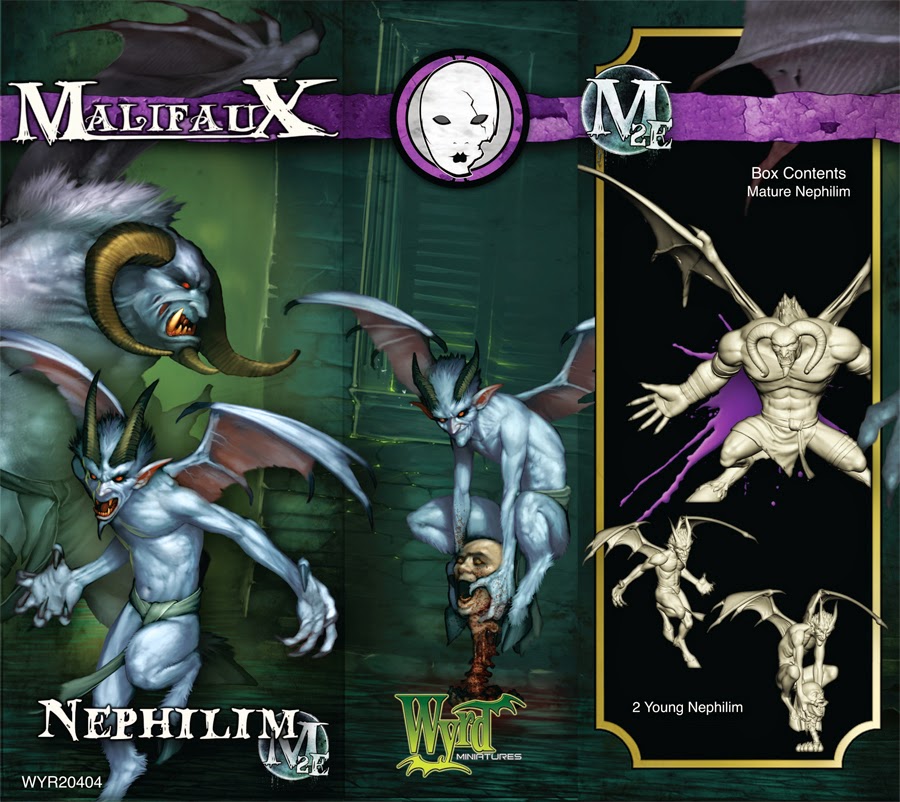 Any Lilith crew needs one of these too. The Young Nephilim are fast and good in combat. The Mature Nephilim is a complete beast that rips most things into tiny pieces!

At odds with Lilith’s desire to retake Malifaux, Pandora is a Neverborn Master who doesn’t really agree. She walks the streets disguised and glamourous with a strange box. When she opens the box, the world spins. Reality is blurred, sanity is crushed, hope dies. The purpose for her and her woes is to inflict as much misery and fear onto the everyday citizen as possible. If the humans left Malifaux, who would she play with? Her play style involves crushing the resolve of her opponents with willpower duels and manipulating their actions. 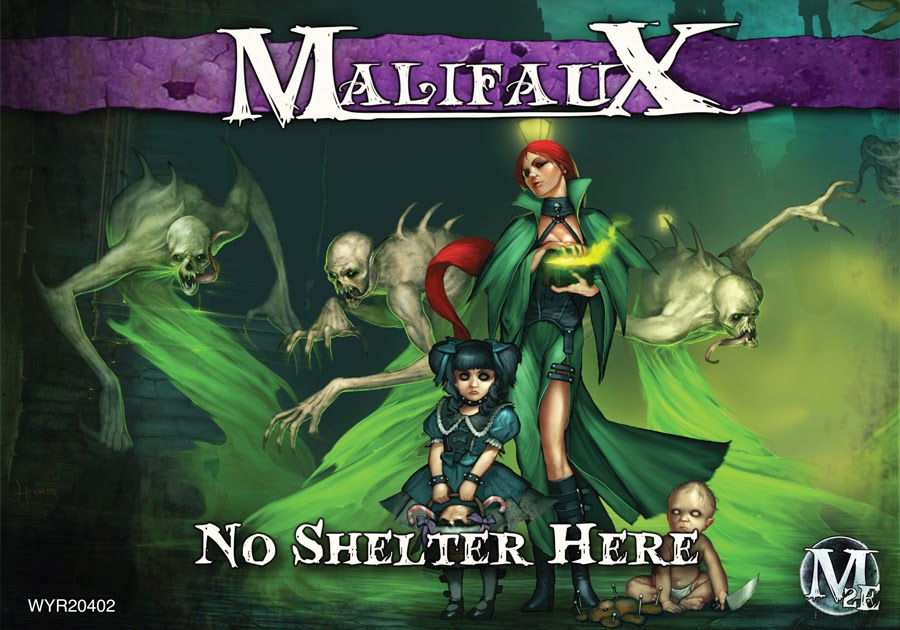 Pandora is usually accompanied by her Woes and Poltergeist. Candy and Baby Kade are possessed children, who use their innocent appearance to lure in poor victims.

Then there’s Zoraida the Hag, the Voodoo Swamp Witch. Zoraida is old, ancient old, and she’s human. How she crossed over to Malifaux so long before the first breach is a mystery, but she now plays the role of Oracle. She reads the strands of fate, and interweaves her own plans into this rich tapestry. The desperate often seek her out, but few return from her lair. She is the master for manipulating the opponent's models.

Sadly, Zoraida's new 2nd edition box set hasn't been released yet, but expect it to look like this...

For the final factions: the Resurrectionists, Ten Thunders, Outcasts and Gremlins, click here.