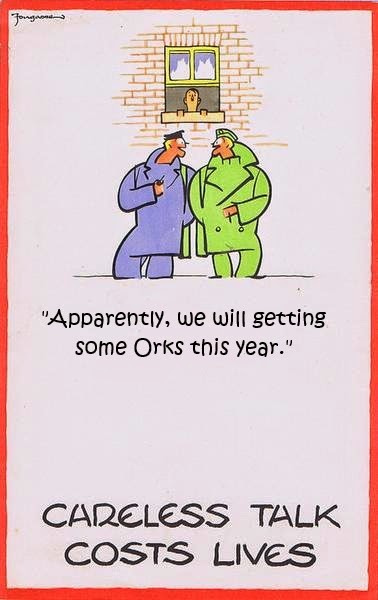 Last month Games Workshop apparently enacted a ‘Rumor Lockdown’ as a result of the early leaking of the Imperial Knights. Their intention was to keep the release under wraps so as to increase the impact of their announcement in White Dwarf Weekly Issue 4. This failed miserably when the images and details of the
Knights starting to make their rounds across the internet nearly 2 weeks prior to their official announcement.

So its nearly two months later and have we felt the effects of this lock down? Well no, the Militarum Tempestus and Astra Militarum releases were leaked nearly a full month before their actual release. These were mostly due to the fact that editions of White Dwarf Weekly are being leaked and released early by Independent Stockists. Most of the images and solid information we have been seeing originated from the pages of this publication. It may be the case that Games Workshop have really cracked down on their internal leaks, staff discussing projects  for example. But this new policy has not yet been felt by the community.

So what can they do? Well Games Workshop, I have the answer Think of me as your little Dutch Boy using his finger to stem the leaks in the Rumor Dyke, sort of. I say sort of because the only real solution is to start the leaks yourselves. Now I don’t mean performing clandestine operations, doing dead-drops of next months White Dwarf and making anonymous phone calls. What I am saying is take control of your releases by not waiting until a week before a release until you officially acknowledge its existence.

Now before we go any further we must take a look at Games Workshops release policy. To really highlight how peculiar it is, we must think of it in another context. When you hear about a new film, video game, album or TV show do you hear about it the week before its release? No you are aware of it long before this, several years ahead in some cases. The success of these products relies on building hype and exposure, announcing them nice and early gives the target customers plenty of time to become aware of the new product.

If you’re still not convinced then lets apply GWs strategy elsewhere. Imagine if Avatar 2 was only officially announced a week before its box office release. It sounds absurd right? I know I’m comparing apples and oranges here, a blockbuster film has a lot more money riding on it then the next Ork release but the principle is the same. By announcing their new releases by only a month or two in advance Games Workshop could not only severely quell the rumors but they could also increase their sales.

As an example, lets take a look at the Imperial Knight which sparked off the ‘Rumor Lockdown’. If Games Workshop had announced it in early January they could have really pushed to product to us. GW stores could have had pre-view models that people could use in some in store games. This would have not only given people a reason to visit GW stores again but also get them excited about owning a Knight. They could have seen the rules in action and decided if it was right for them rather than erring on the side of caution and waiting a few months until after release.

I would not feel as though this article was truly complete unless I took a peek over the fence and discussed why Games Workshop might be so reluctant to announce early. Over the last few years Games Workshop have been involved with legal battles with parts manufacturers such as Chapter House Studios. Now in this case GW did win, with CHS having to pay damages to GW, but it was a difficult process and generated a lot of bad press for GW.

I imagine that these experiences have left Games Workshop apprehensive of announcing their products early. Just in case these independent manufacturers quickly created copycat versions which could damage their sales. Although the reasoning is understandable, in practice I think that this is an overly cautious stance to take.

There may well be other reasons behind their announcement strategy but they are not immediately apparent to me. Maybe they believe that the last-minute approach will cause people to impulse buy. If this is the case then Games Workshop would have to be very pessimistic about their products. Surely giving people plenty of time to decide if they like a new kit or even time to save up for it would outweigh any loss of custom.

So will we ever see a Games Workshop which embraces the free publicity of the Rumor Mill? Probably not any time soon, The company seems to be very reluctant to properly engage with the online community of wargamers, even though it could open up a lot of opportunities for them. We can wait in hope that Games Workshop will eventually catch up and take a leaf out of other companies books. For the time being at least, we will just have to be content to sip from the leaks in the Rumor Dyke.