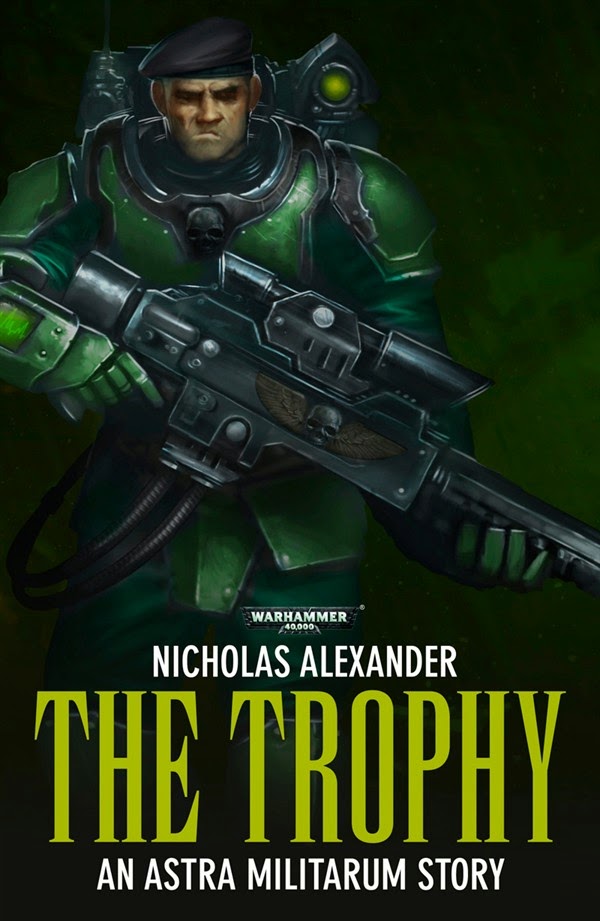 The Trophy by Nicholas Alexander.

As I've stated before, despite the diversity of races that permeate the Warhammer 40,000 universe, it is the stories of the good old rank and file, the Imperial Guard, that end up appealing to me the most. Also, Imperial Guard (oh, excuse me, Astra Militarum) tales seem the best medium for trying out new authors. Although the author bio states that Alexander has written several Guard stories already, this is the first that I have seen by him.

So the question then becomes whether or not Alexander will take a trailblazing approach storywise, or if he will play in a comfort zone and go with something traditional. Let's take a look at the story blurb:

"As the greenskins of Waaagh! Ugskraka spread across Balle Prime, a high-ranking Imperial general is lost, his transport shot down by crude ork fighters. He must be rescued from the alien hordes – a job for the scions of the Militarum Tempestus. Tribune Leander and his men head into the heart of the enemy force, battling both the jungle and the greenskins as they search for their target – but even as they close on the general, they are being hunted by a force more savage and ruthless than they can imagine…"


Imperial Guard vs. orks. A mission to go into a horde and retrieve something/someone. You can't play it any safer than that. So does the author at least inject some kind of freshness into these fairly standard proceedings?

Unfortunately, no. And to make things worse, the writing here is fairly lackluster. I remember a review a long time ago regarding Ice Guard, another painfully underwhelming Guard tale, describing it as "a splattering of words across a range of pages". And that is exactly what we have here. Nothing pops off of these pages. At all. Not only that, but some of the elements here are just plain goofy.

Let's start with the characters. Things seem promising at first; for instead of a standard Guard yarn, The Trophy features a crack team of storm troopers. Alexander decides not to grace any of the members of the team with any semblance of personality; the excuse being that they are such finely honed living weapons that everything revolves around the mission. Ok, fine. But some kind of inner monologue would help. There is mention of training at the schola progenium; maybe a flashback would have helped. Even something as simple as detailed physical descriptions would have livened things up. When me meet the troopers, we are given their names and corresponding function on the team (comms, demolition, heavy weapons, etc.). The attempts at being clever with the names fall flat; for example, we have a trooper with a flamer named Draco (insert groan). We also have the scout named Tacitus, because he is taciturn. The funny thing is, being the scout, he ends up talking the most as he relays information to the team.

Now, I am not a military man, and I do not know any special ops types personally. So even though I am not privy to the protocols of elite soldiers, nothing this group does comes off as remarkable. One incident that bothered me in particular was towards the end, when the leader, Tribune Leander could not tell the difference in engine sounds between a Valkyrie and an ork transport. Not to mention the fact that the ork transport has two huge rotors whirring away as well. Another instance that did not sit well with me was when Leander felt that the team could evade detection by ork kommandos because they had fresh ork blood smeared on them. I'm pretty sure that a) kommandos could pick up more than one scent at a time, and b) they would be alerted that something is amiss by the prospect of ambulatory blood smears.

Take these things and add them to some of the blandest prose that I have read in quite a while. The story lopes lazily from action point A to action point B, all with predictable outcomes as the troopers are whittled down in a fairly predictable order. There is precious little world building, and the bulk of the descriptive terms, while technically sound, are just uninspiring.

There is one bright spot in this story; a final act duel, which takes too long to get too and is over too quickly. But the scenario itself; the leader of the Imperial force squaring off against an ork warboss in a fistfight, is reminiscent of the climax of Rynn's World. Heck, there is another scene lifted almost entirely from Rynn's World as well, involving an ill-advised sniper shot failing against an ork boss' force field, which leads to the entire mission coming apart.

I really wanted to like The Trophy. With a snappy cover and a seemingly fail-proof premise, it had no excuse to be as bland as it was. Pass.

Here's what it is:
One of the weaker Imperial Guard entries that I've seen, it has some decent elements in the fourth quarter, but nothing shines throughout. Some credit is given for trying to add a decent variety of orky units (transports, kommandos, gyrocopters). My advice; leave the greenskins to Guy Haley.


This cover by Hardy Fowler is the best part of The Trophy. Usually I am not a big fan of Fowler's Imperial Guard pics or Astartes faces (his fully suited Space Marines are great though), but this lantern-jawed storm trooper is well done, with a strong graphic novel vibe. The green of the carapace armor is a tad bright, but otherwise well done.


Reviewed by Hachi Snax
By Unknown