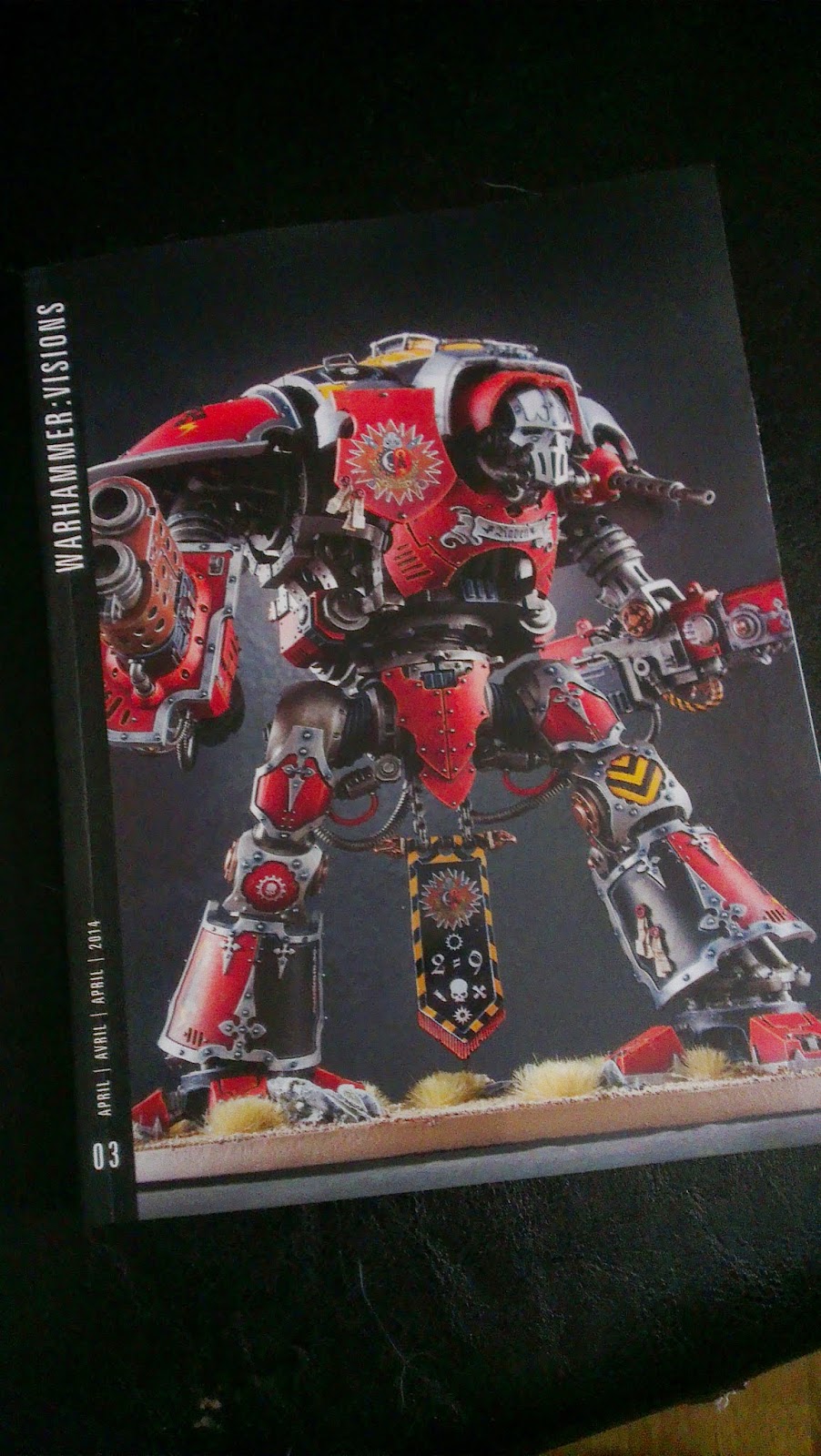 Bayonet here with another look at Warhammer: Visions - this time looking at Aprils copy.

As you can see by the front cover it's all about Imperial Knights (insert your opinion of these here - I'm thinking Power Rangers Megazord). Certainly the opening few pages we are graced with a barrage of walker-porn as our eyes are assaulted by Chainswords the size of your shed and enormous barrels that are clearly compensating for something. Whatever your opinion of these models, one thing you cannot fault is the exceptional paintwork they've slapped on them and some stunning photo shoots to boot.

Once we get past all of the manly giant machines kicking the crap out of each-other we get to a showcase of the new Helbrutes in all of their twisted glory, I have to say even though the rules for these guys absolutely blow the standalone kit is exceptionally good in comparison to our click-fit one we got with Dark Vengeance -the Thunderhammer and mutated arm are particular favorites of mine. There's a little of The Hobbit thrown in to keep New Line Cinema happy with an incredibly camp pose struck by Thranduil that looks like some sort of erotic Lunge exercise.


Now my favorite part, Forgeworld - Wow, what a spread, a nice full size photo of each of their current range of Primarchs, nothing you haven't seen before really but they are a much higher quality of shot than on the Forgeworld site - I won't post pictures of all of them but Ferrus Manus is looking particularly badass today.


Moving on we've got Army of the Month, this month we have an Orkish flavor with quite a few pages dedicated to Stu Black's Goff Ork army and what an impressive collection it is - certainly worth a look! All I can say is that his other half either doesn't exist or is very understanding because an Army that size will take a hell of alot of real estate up in ones home.

Parade Ground has the usual crop of photo shoots from Armies on Parade and other various competitions, all stunning as always but I like to pick out my favorite and here it is:

Now there is a battle report, but it's abit crap. It's between Chaos and the Ultramarines with some Knights thrown in, there's no "turn 1, turn 2" etc it's just loads of photos and some sort of random description of events. I love all the photos and hobby articles in Visions but a decent battle report would be nice too. Blanchitsu then depresses me with some stunning Inquisition work I could never hope to reproduce before we get bombarded with more Imperial Knights and a Painting Guide for them which might be of some use to people.

Then we're at Kitbash which has some pretty awesome looking Chaos Lord ideas (several infact), here's a couple I thought were cool:

And that's pretty much it for April, avoid buying if you collect LoTR or Fantasy over 40k as there's naff all in there for you, buy it if you're a 40k player who has picked up some Imperial Knights and want some inspiration!