40k War Journals are battle reports told as a narrative short story with lots of pictures. The story is completely reliant on the outcomes of the battle we played. 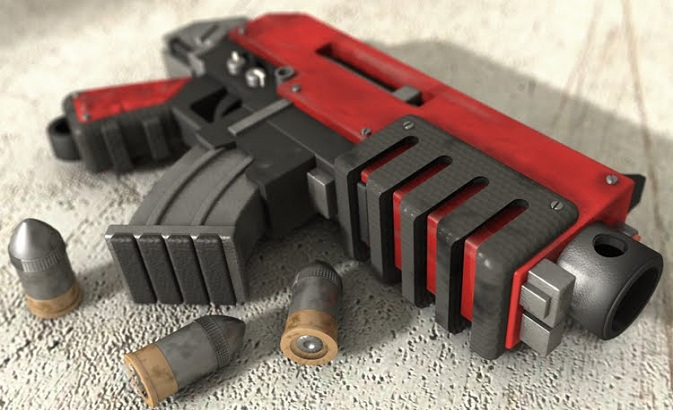 During the Siege of Panutu, the Imperial Guard fought bravely for two years to halt an Ork invasion into Imperial Territory already left vulnerable from a Tyranid splinter hive. The Ultra Marines and Dark Angels had just arrived a few months prior to help fortify the battered fortifications and remove some very important data slates before they fell into Ork hands. Warboss Toofgut was one of the minor Warbosses that participated in hopes of a good fight and good loot. Unfortunately, the tides of battle had moved the battle lines away from his mob, leaving very few opportunities for combat and many angry Orks.

That all changed when a streak of flame arched across the dusk sky over Toofgut’s warband. A Stompa had managed to shoot down a small Astartes ship carrying one of the data slates. Not at all interested in the data slate, but knowing that Marines would be sent out to retrieve it, Toofgut sent all of his forces to find the crash site. It is there that they found an escape pod that landed in a building and a mortally wounded Ultra Marine laying thirty feet away to the East; holding the data slate. Toofgut and his forces were set to ambush anybody who was sent to retrieve it. 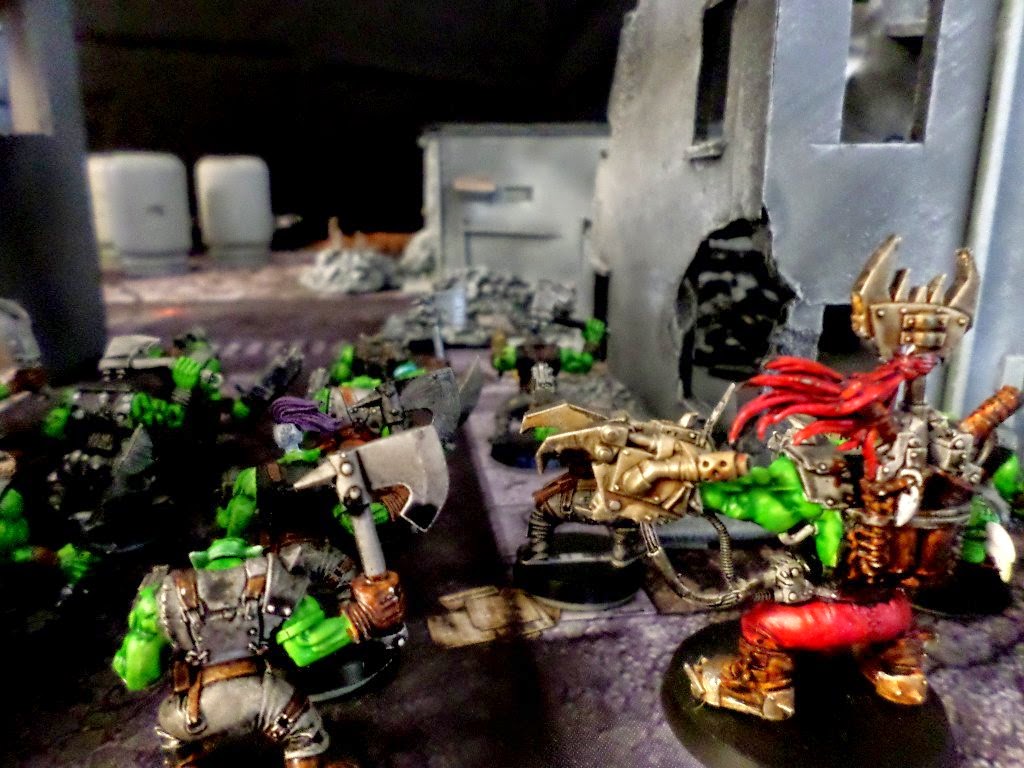 It wasn’t long before they heard the thundering sound of bikes heading their way; Toofgut wiped the drool from his thick lips in excitement. At first sight of the Dark Angels, Toofgut ordered his Deffkoptas to swoop up the West flank and take cover behind a building. The Warboss and his mob of ‘Ard Boyz charged up the center near the Escape pod building while his Cybork Nobs charged up the East side; Painboy in tow. As soon as the wave of Ork battle cries reached the Dark Angels, they wasted no time in engaging them. The first unit of Bikes drove up the East flank and peppered the Nobs with bolter fire, only killing a single Nob. 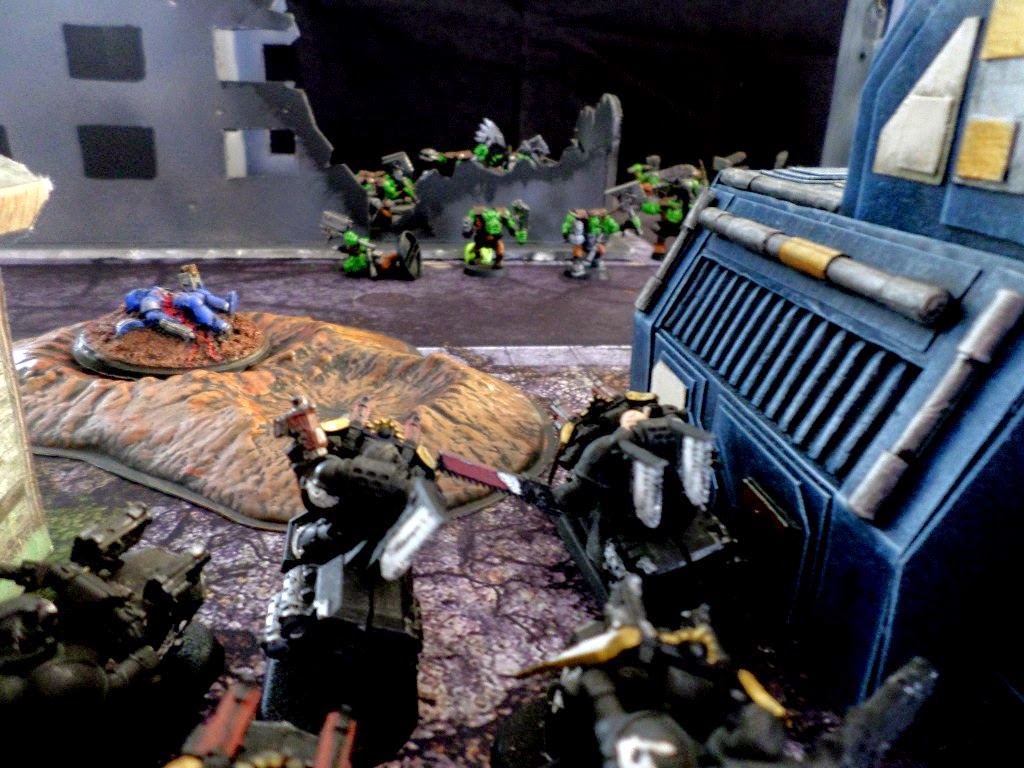 There was a massive ice blue explosion from the first Tactical squad in the center of the field as the Plasma Cannon over heated, leaving only two Dark Green boots standing. The boyz cheered at the dazzling lights while that same tactical squad joined the second bike squad in slaying several Boyz. The second Tactical squad advanced from the West side towards the escape pod in the center and quickly silenced two boyz.
The Ork Deffkoptas burst out from cover leaving black clouds behind them as their Big Shootas covered the second Tactical squad in a shower of sparks. One lucky shot went through Brother Tobus’ eye lens, emptying the contents of his helmet all over the Marine behind him. Another went through the throat of Brother Kendral, causing him to drown in blood. 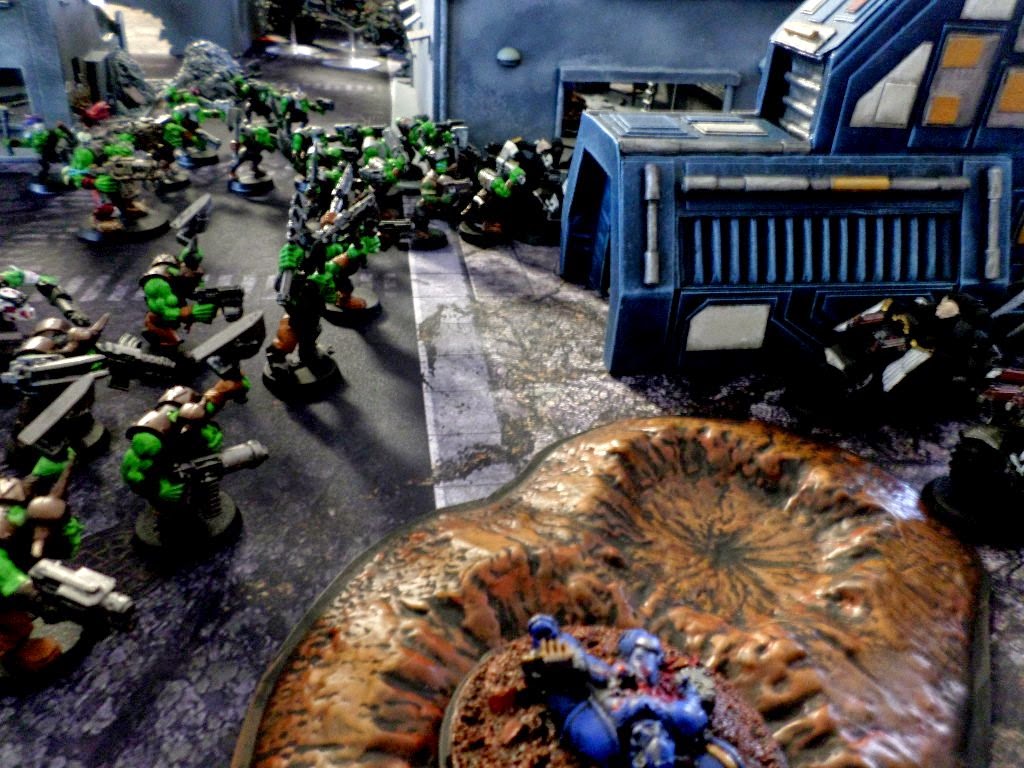 Toofgut and his ‘Ard Boyz managed to assault the second bike squad, led by Interrogator Chaplain Mikus. The Boyz managed to rip a Biker limb from limb as two of them died. Meanwhile, Chaplain Mikus sent his engine into a scream as he hurled himself full speed towards Toofgut, bolters blazing. 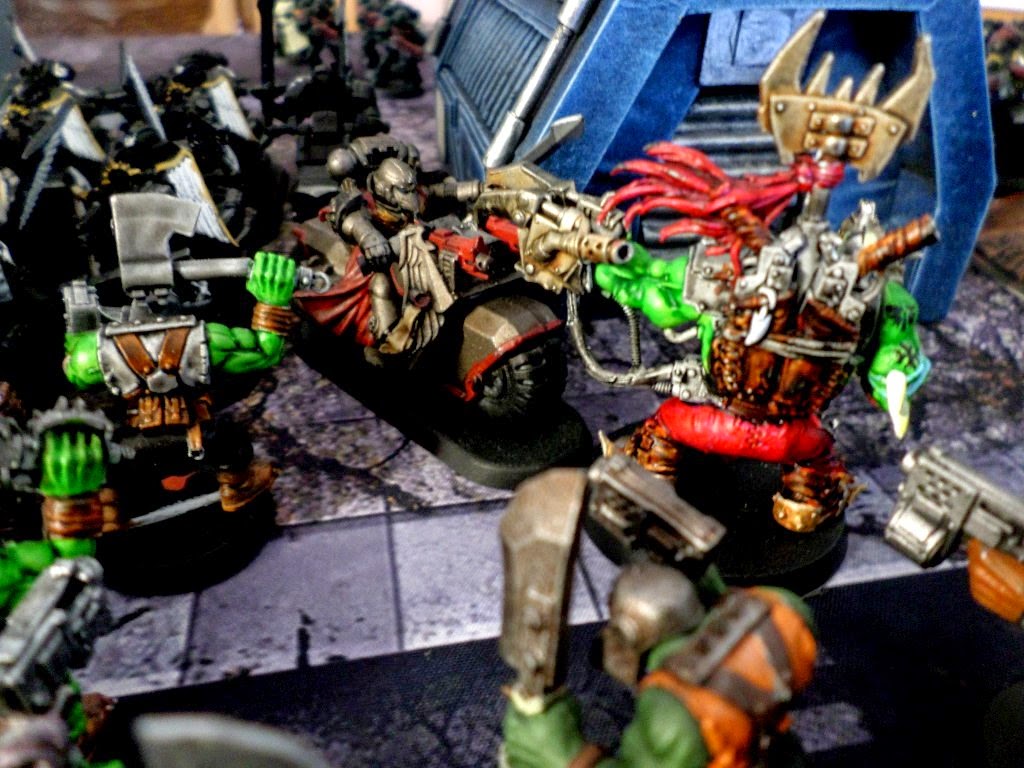 The Warboss sent his massive Power Klaw crashing into the front tire of the bike, sending it and its rider vaulting over Toofgut’s head and smashing into the ground. The Chaplain was crippled but managed to pull himself up and skewer the Ork through the chest with his power sword before Toofgut cut him in half with the snip of his Power Klaw. The savage Warboss unsheathed the power weapon from his chest and stuck in the Chaplain’s head as the Nobs attempted to assault the first bike squad on the East side. The first bike unit sprayed the Nobs with a hail of bullets until two of the front Nobs fell, causing all of the rest of them to trip and tumble over the corpses; stopping their charge. 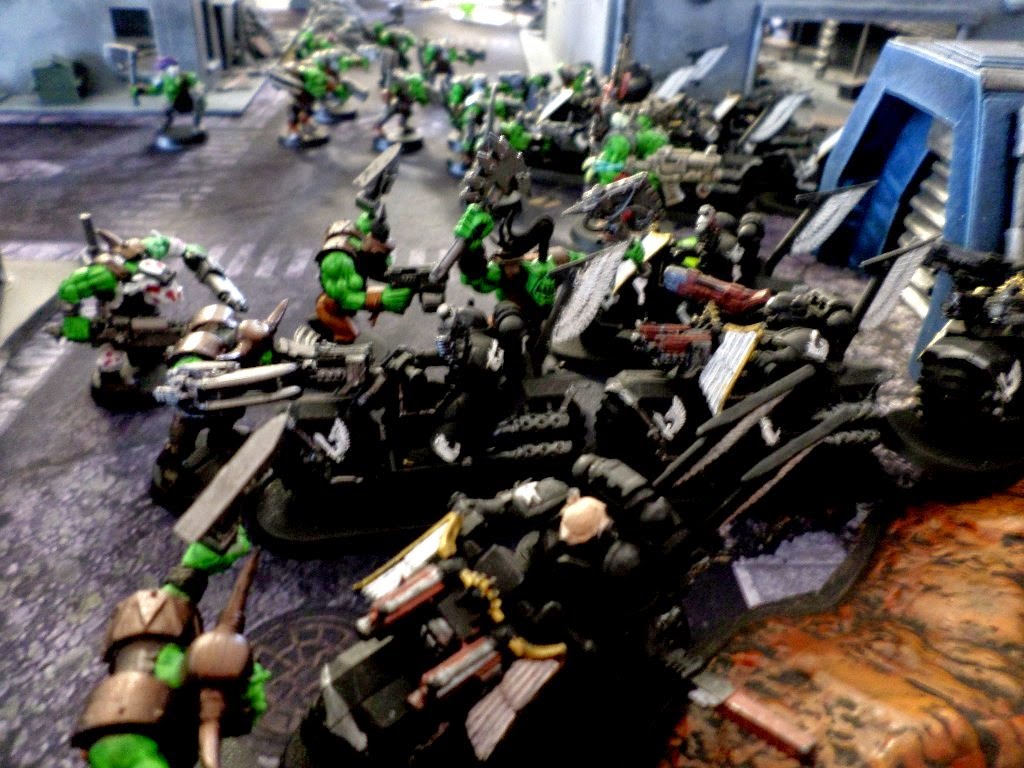 They went forth in a burst of speed, laying a Nob low to gunfire and slamming into another with their bikes, crushing his torso and sending gore out from his mouth. In a blind rage, the remaining Nobs beat three Bikers to death in the melee.

The last two remaining bikes from the first squad rocket off to the East side of the field where the data slate marine is. The second bike squad wheeled away from the ‘Ard Boy combat in unison just to turn around and hammer into the Warboss and his Boyz in vain. Toofgut decapitated one biker, punched through another’s head and bludgeoned another with his own bike; meanwhile only two Boyz were slain. 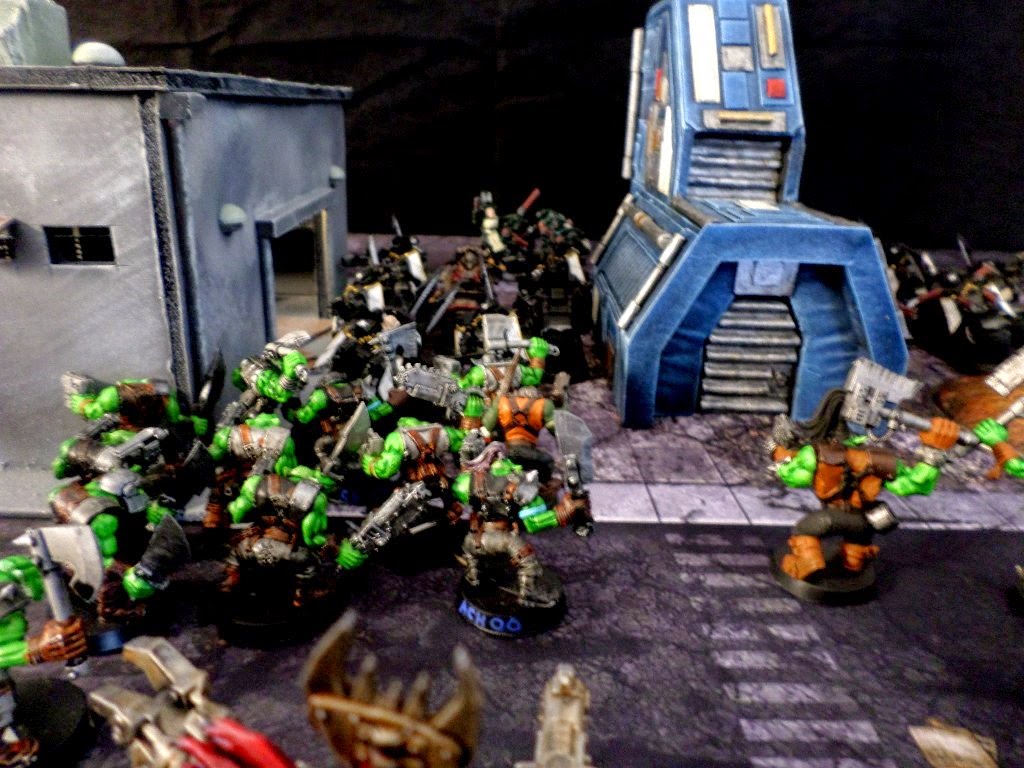 The first Tactical squad held their ground behind the melee in the center of the field as the second Tactical squad lit up the Defkoptas with bolter fire, only managing to wound one. Another Deffkopta barely escaped a rolling ball of blue plasma from the second squad’s Plasma Cannon. 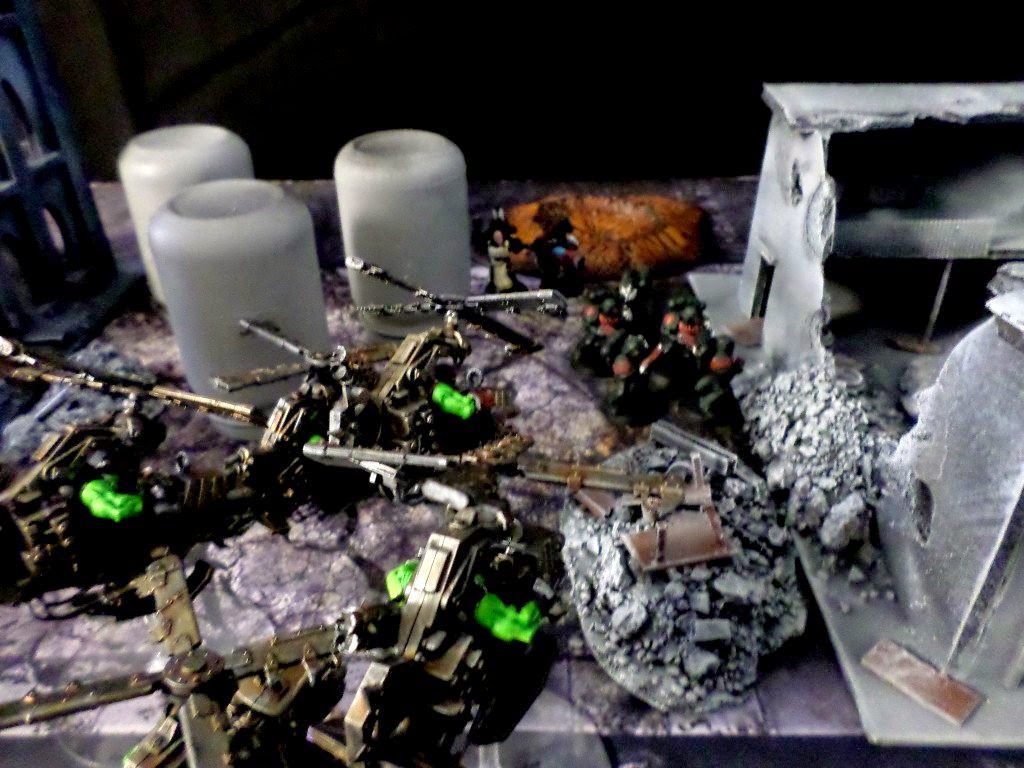 The Koptas got lucky again with their Big Shootas, slaying three more Tactical marines from the second squad but failed their charge when the front Kopta got shot down, causing them to collide. Toofgut’s Boyz destroy another biker while the Nobs assault the first Tactical squad in the center. The combat-fueled Cybork Nobs prove to be more than a match for the Tactical Marines as four Astartes are murdered. The last remaining biker from the second bike squad speeds off to join the other two from the first squad on the East side; desperate to retrieve the data slate before they are over-run. 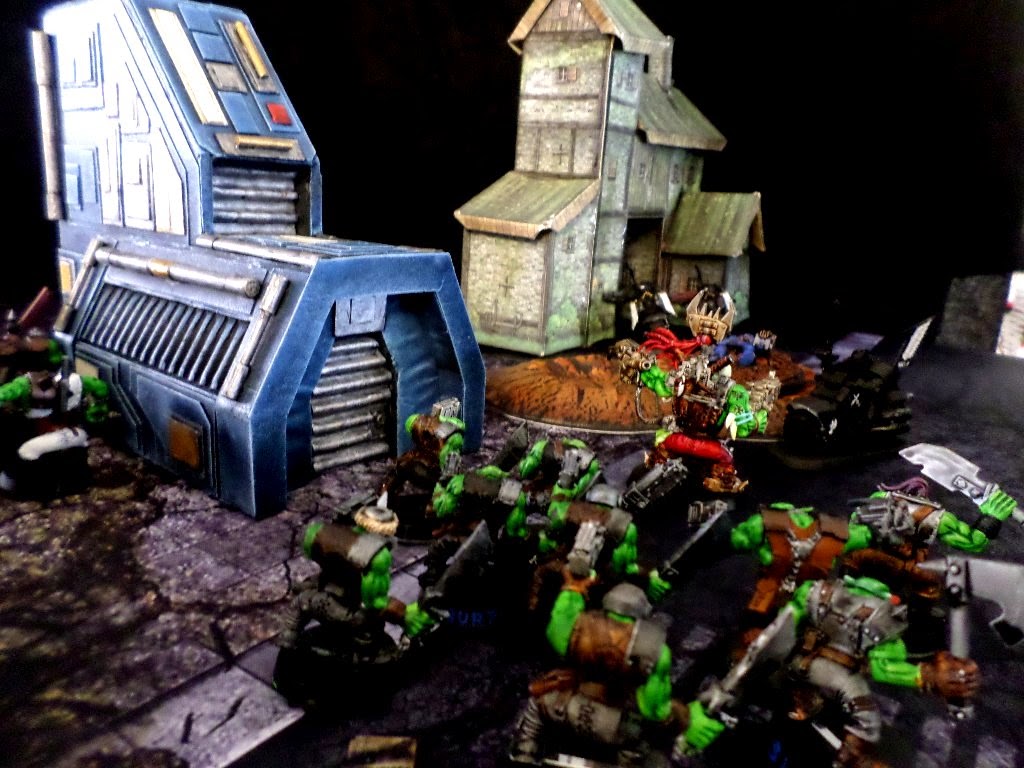 The Deffkoptas manage to exterminate two more Tactical Marines from the second squad as they attempt to search the escape pod for the device. 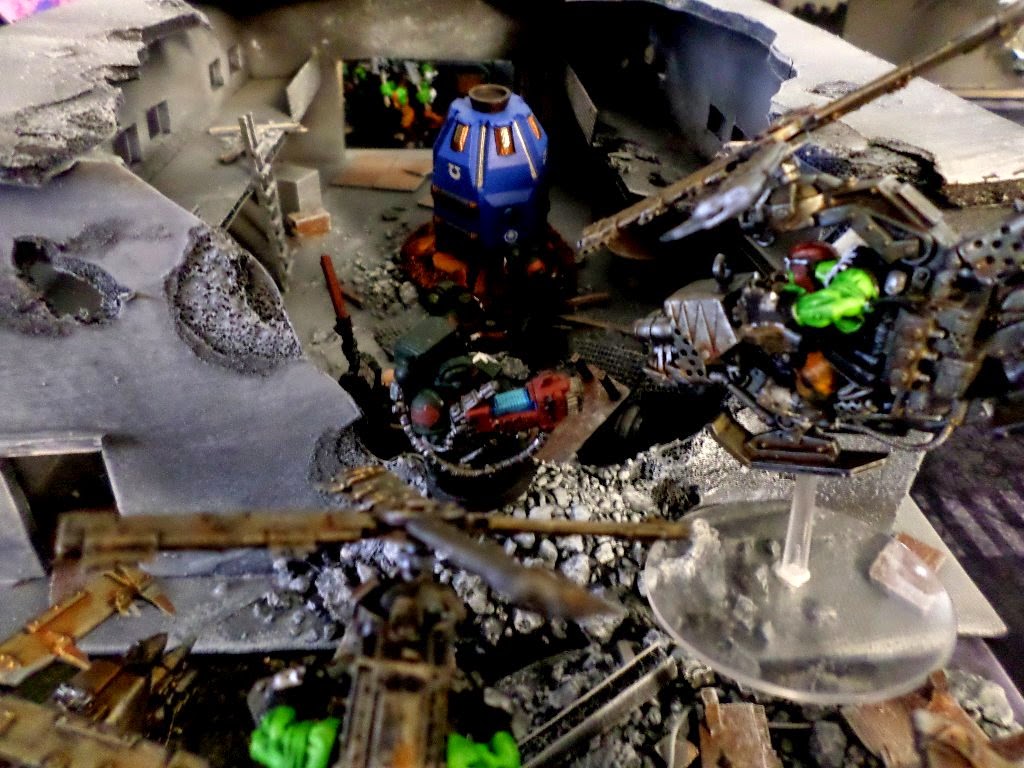 The blood thirsty Nobs wreck their way through the remnants of the first tactical squad, when all of a sudden, the remaining three bikes pick up the data slate and speed out of sight. 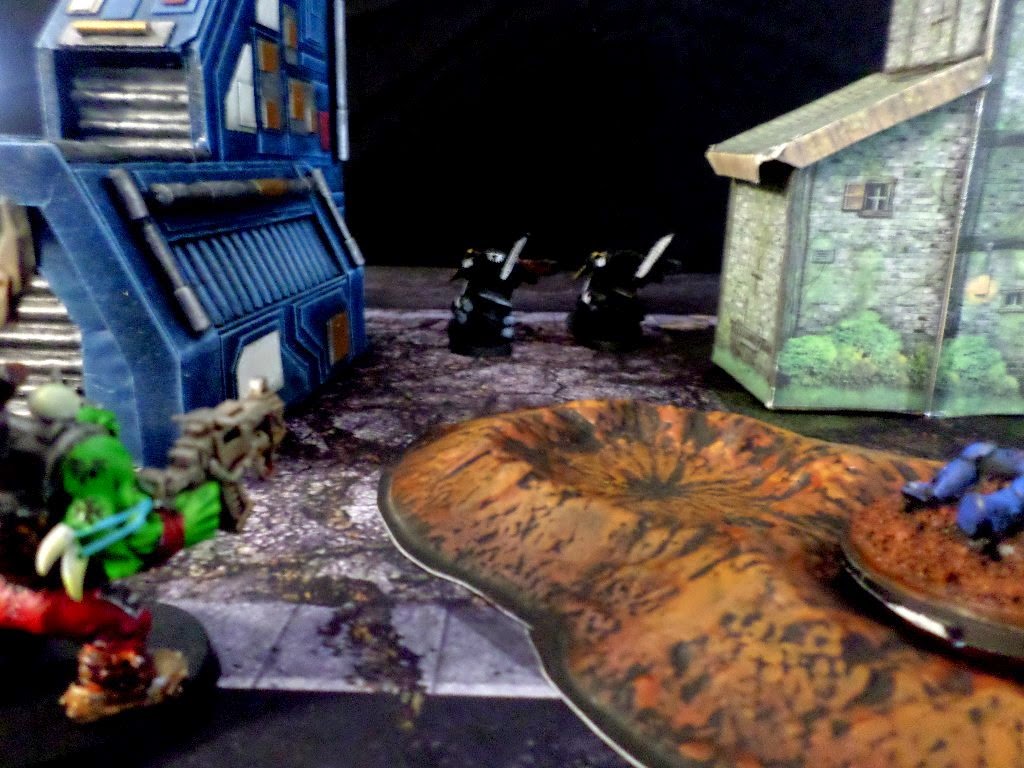 The Orks let out screams of savage triumph as a sound in the back ground slowly grows louder. The dim sky begins to glow above them as they look up to see what seems to be a small burning sun falling down on them. The howls of victory quickly die as they look up in awe at their fiery death. 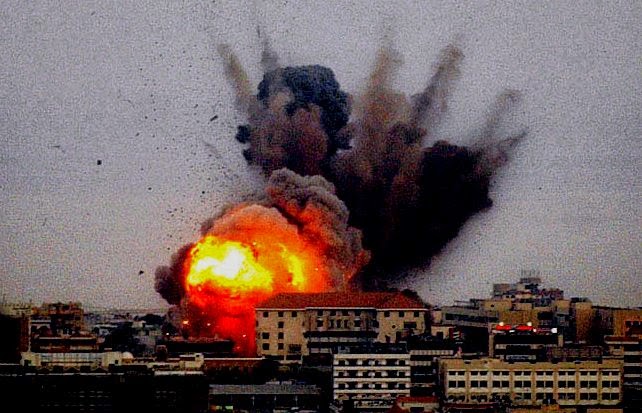 This was a test run for a new format of Battle Report. If you enjoyed this and would like to see more, please comment below or share it. Both of those are ways I can tell what you think.