Tyranids: Failing at 'Forging a Narrative' 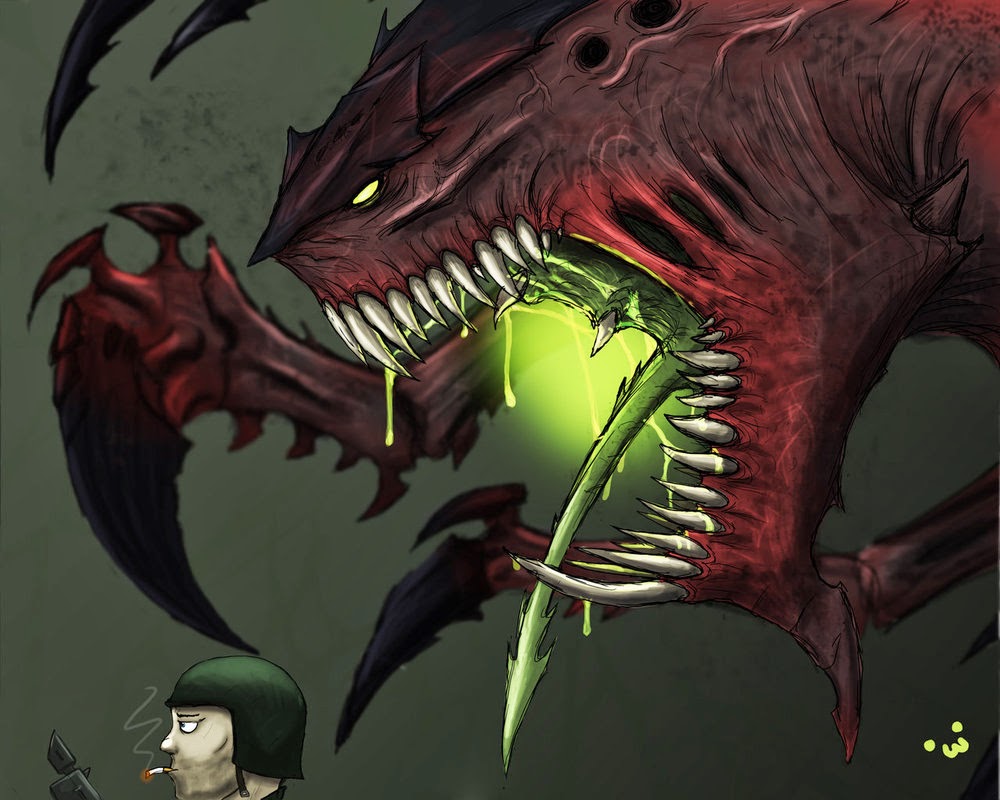 Before we even begin I need a disclaimer; the newest edition of the Tyranid Codex has been largely derided by the 40k community as lacking in competitiveness. This article is not about that (at least not directly). The complaints I am going to level would still apply even if the Codex was wrecking face at the top of tournaments, and the community was shouting 'cheese!'

Now let's get down to business.

For a race of supremely evolved combat monsters who mutate at the drop of a hat to overwhelm any and all foes they encounter, with a variety of perfectly adapted creatures to fit any situation... the Tyranid Codex sure sucks at both adaptation and variety doesn't it? It is extremely constrained in the builds you can actually produce due to its extremely dysfunctional FOC layout, and that's not even taking into account how much more limited you are if you want to actually make competitive lists.

"But random internet writer," you say, "this is a problem for all Games Workshop books, why are you bitching about it now?"

Simple, random internet reader, because moreso than literally every other Codex in the game the core theme of the Tyranids is variability and adaptability, and Games Workshop has repeatedly made it clear that their primary interests lay with insuring gamers are able to play their favourite stories out of the fluff, or create their own (the much derided "Forging a Narrative" section). Indeed all of 6th Edition has been geared towards this; the allies matrix, Codex Supplements that expand the backstory of a variety of sub-factions with very little rules support, Escalation bringing super-heavy's into the standard game, and a variety of mini-Codex's (Legion of the Damned, Inquisition etc) that are not meant to played on their own, only as allied forces.

I'm not complaining about this per se, it's Games Workshop's game and if that's the direction they want to pull it that's their choice. It's really too bad that Tyranid players can't do this. Like, they can't freaking do this at all.

As I mentioned before the Tyranid Codex makes it violently clear that the central theme of the Tyranids are their adaptability and variety. Don't believe me? Here, let me spam you with examples;

"The Tyranid race continuously learns and adapts, spawning new warriors and beasts of war to better defeat its foes."
-Pg. 3, literally the first paragraph of the book.

"To this end, the hive fleet creates an army with the express purpose of overcoming the prey world's defenders..."
-Pg. 6, the second page of the book since there is only art on pages 4 and 5.

Moreover it is the central theme of the majority of the Tyranid stories. How about the entire war for Macragge against the Ultramarines?

"Under the Swarmlord's dominion the swarm was adapting to defeat Calgar's tactics as quickly as he could conceive them."
- Pg. 12.

Or Hive Fleet Gorgon fighting against the Tau;


"More so than any hive fleet encountered before or since, Gorgon possessed an ability to rapidly adapt to new circumstances on a biological level, emerging from every lost battle with a newclutch of organisms perfectly suited to overcome the foes that had defeated their predecessors. It would come to define the very nature of the war against the Tau: adapt or die."
- Pg. 20.

It even becomes their weakness when the Imperium joins the fight on Kel'shan!

"...but the disparrate weaponry and tactics employed by the allies prevented the rapid
adaptation that had plaggued the Tau on Sha'draig."
-Pg. 21.

Not to ridiculously belabour the point but it's also the central turning point in the story 'The Fall of Shadowbrink' where the Tyranids constantly out-adapt the Chaos Daemons resulting in this particular embarassment for Grandfather Nurgle;

"As each rancid disease was unleashed by the children of Nurgle, so the next brood of Tyranids had grown resistant to it."
-Pg. 30.

This adaptability even works its way as a theme into the bestiary of the book.

"This goes some way to explain why the Tyranids can rarely be defeated the same way twice."
-Pg. 40, the Hive Tyrant entry.

Now that I've established that this is the central theme of the Tyranids as a faction you might think that this would be a priority for Games Workshop to represent on the tabletop. After all, they have a lot of experience with it. The Chapter Tactics system for Codex: Space Marines was phenomenal, allowing the exact same list to be played multiple different ways. Eldar can play a variety of theme's, not least of which was the ability to use Force Organization Chart swaps to play an entirely Wraith themed list, or how about Chaos Space Marines with the cult Troop unlocks, or Dark Angels with normal, Deathwing and Ravenwing armies.

So I opened my brand new Tyranid Codex, freshly updated for sixth edition, wondering what goodies and variety I'd find! You cannot believe the crushing dissapointment. Mycetic Spore Pods gone with no replacement mechanic. Options wholesale removed (Armoured Shell anyone?). Fluffy and fun, albeit rarely used, extra rules completely removed (-1 Leadership on Morale Tests for Devourer weapons, the Pyrovore's Flamespurt being able to be fired even when under Instinctive Behaviour, etc).

Surely though, with over 25 years of experience, Games Workshop will have replaced these loses with something brilliant? In case you've been living under a rock, or are just tuning in, spoiler alert: they didn't. They replaced all the losses with absolutely nothing. 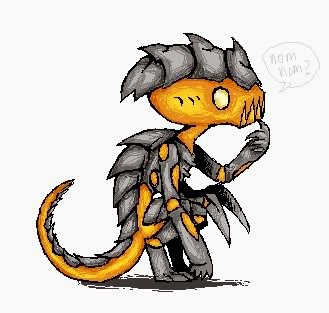 We did not get Hive Tyrants with the Wings upgrade making Gargoyles troops. No Trygon Prime allowing Ravenors as Troops. Heck, we didn't even get a way to make Carnifex an Elites choice instead of Heavy Support and that's something we already had at one point (oh fourth edition codex with your ridiculous amount of upgrades, how I miss you).*

Instead of an internally balanced book with many variable builds we received a horrible mess where all units that had certain abilities were type-cast and then forced into the exact same FOC slot. Seriously. Let's ignore the HQ slot for a second and look at it the Codex as a whole. Outside of the Flyrant literally every unit that can move farther than 6" per movement phase is in Fast Attack. Hormagaunts are your 'fastest' troop and they'll still struggle to keep up with Shrikes, Gargoyles and Raveners, let along the variety of Flying Monstrous Creatures (not that you can take a variety of them anyways, they're all crammed into the Fast Attack slot so you can't even take one of each of the things that have wings because... uh... reasons?).

This is a huge failure for Games Workshop. This isn't Codex: Necrons, where slavish devotion to tradition, combined with actual slaves, is the theme. This is Tyranids.

Page 9 of the Codex has this really cool graphic outlining the various stages of a planet as the Tyranids consume it; Invasion, Predation and Consumption. You can acturately portray, as a themed army, only one of these stages: Predation, when literally everything the Tyranids have is running amok.

Let's say you actually want to build a narrative, themed, list for one of the other stages. You'll take, what, exactly, to make it distinct from a standard Tyranid list?

Lets go with an Invasion list. Deathleaper in HQ, spam three Lictor Broods and I guess max out on Genestealers in Troops? Effectively spamming two units, that aren't even that good together? Worse, does that even sound like fun? This used to be easy! You took some Lictors, Deathleaper to 'lead' them, some Genestealers, Ymgarls for extra flair, the Parasite of Mortrex in your HQ slot and then whatever you wanted in Spore Pods to fill out the list. Bam, a decent list, even if wasn't super competitive, but its going to play extremely differently than, say, a Tervigon spam list or Nidzila. Plus it was 100% fluff appropriate.

How about representing an army for the Consumption stage? From a narrative perspective it's actually one of the most interesting. The desperate final hours of the invasion, as the former defenders struggle to escape, or preserve important relics, and the planet dies around them. Fluff-wise the endstage Tyranid organisms are Rippers, Pyrovores and the brand spanking new Haruspex, who consume the world, while Hive Guard patrol the capillary towers that the Hive Fleet needs to actually get the collected bio-mass off the planet. Did you notice a pattern there? With the exception of Rippers all of those units are Elites choices. Which means you get one of each in a standard game and then start playing the "well, I guess a Tyrannofex would still be hanging around, and I need to actually have some units that can score so I'll take a Tervigon and Termagants..." game, and before you know it you're back to playing a standard Tyranid list except you took Pyrovores in it.

*Yes the Tervigon can still be made a Troops choice, no this doesn't count. We all know that this is
basically a way to force players to take a Termagant blob alongside them as a tax. The Tervigon is not an HQ choice, you can't even take it as an HQ choice unless