Games Workshop's Digital Editions Team and the Black Library have let slip some nice teasers this week, o let's take a closer look at them and see what we can find. 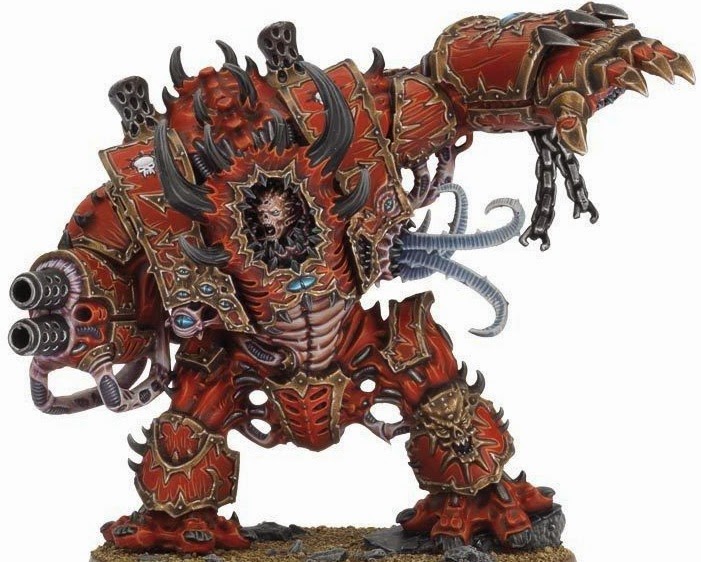 That's right, this week the Digital Editions Team let slip some tiny nuggets of information about this new release over on the Black Library blog. Being the sort of person who enjoys sifting through things to find those previous nuggets I felt this would be a little fun to share and get others involved with so we can all enjoy speculating together.


First up we have this little bit on who can take these murderous meldings of man and machine courtesy of Eddie from the Digital Editions team:


You don't even need to field them as part of a Chaos Space Marines force, and they would certainly look equally at home rampaging alongside their warp-spawned allies in a Chaos Daemons army.

So Daemon players, if these guys end up tickling your fancy then you'll be able to bring them in your army. This may prove to be a decent way to add Cultists to your army without needing to bring a full contingent of Chaos Space Marines if that's your thing of course.

Next up we have a little bit by Andy Clark, the man behind the lore in most of the dataslates:


Personally, I particularly like the Helcult formation. I love the idea of this rampaging mechanical idol storming into battle, totally disinterested in the fanatical fools flocking about it – unless, of course, they get in its way! It feels really appropriate for warbands like the Word Bearers or Emperor's Children, where you can just see the Cultists gathering to worship the very thing that will soon enough destroy them.

It's no surprise that the Helcult features a Helbrute and Cultists but what is interesting is how Eddie followed this up:


We like the Helcult formation too, not least because you actually get all the miniatures you need to field it (albeit at it's smallest) in the Dark Vengeance box set.

Now we know that Dark Vengeance has 20 Cultists and a Helbrute. The question is do you need all 20 Cultists for the formation, or can you use as few as 10 to bring it to the table? Either way, we have an idea of a range of how large this formation will need to be to put it on the table. I look forward to seeing how massive the formation can get though, it could become really entertaining.

The next nugget of truth comes from Simon Grant, apparently the rules designer for the dataslates:


Regardless of the exact nature of their apotheosis from man into machine, there are some Helbrutes who, by ill fate or dark blessing, are reborn as the mightiest of their kind. It is for this reason that my favourite Formation is the Helfist Murderpack, for one of these fell machines leads the other Helbrutes into battle as a Chaos Lord would a squad of Chosen. Not only is he blessed by the Dark Gods with protection in the form of a 5+ invulnerable save, but as a character, this pack leader can even fight in a challenge!

So the Helfist Murderpack is a formation of Helbrutes (not really a surprise), but what is a surprise is the Invulnerable save conferred to the Alpha Helbrute, as well as him being relegated to Character status! This may infact be the rumored unit of 1-3 Helbrutes we were hearing about previously, though we may see more allowed in a unit to make a proper pack of murder on the table.

Sadly they don't tell us anything about the 3rd formation, the Mayhem Pack, so for now we'll have to imagine what they'll be getting for rules (outside of Deep Strike that is...).

I definitely want to give the Digital Editions team a pat on the back for doing a teaser right: just enough information here to start us guessing, but not so much to show the whole hand. I am definitely looking forward to see what this dataslate will contain.
By Zion