The voices are crying and can only be silenced with the spilling of blood. Yes, Crimson Slaughter has been unleashed from the Warp upon the world. 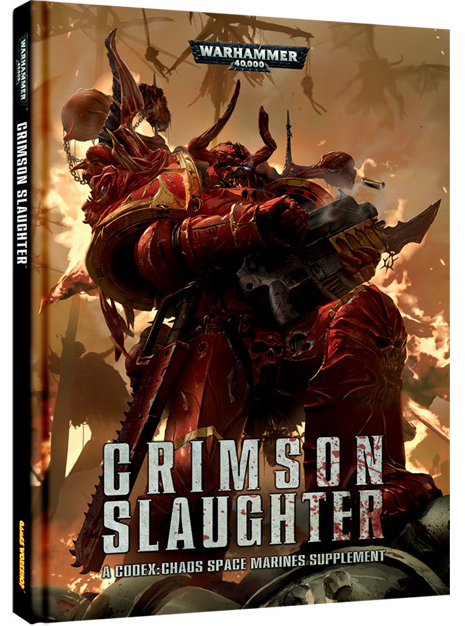 Yes, the second supplement for Codex: Chaos Space Marines has been released. So let's dig in and see what kind of blood shed the Crimson Slaughter is prepared to bring.

Honestly at this point in this edition I'd be more surprised to see the artwork is bad. Once again it really hits the right notes for me and I enjoy it. I'm really glad the art has gone the direction it has and look forward to the releases partially just to see what new art will be in them.

The lore covers the Crimson Sabres transformation into the Crimson Slaughter as well as their curse: the haunting voices of their victims that only go quiet when their butchering their foes. It also lays the ground work for the cursed chapter's feud with the Dark Angels. All in all a pretty decent bit of work that sucked me in several times. It's almost enough in itself to drive me to want to unleash these monstrous butchers on the table myself.

The models don't help any since they're all drop dead gorgeous with that nice red with the arcane blues on them.

No codex supplement would be complete without some serious flavor provided by new rules. Here they are:
A lot of really interesting and flavorful bits here. The restriction on Veterans of the Long War seems a little odd to not include Thousand Sons in, but considering the Crimson's Slaughter's history it's not too out there. Thought it could also be a small oversight.

I really like the Slaves to the Voices rule as it moves Possessed out of the Elites slot (and makes them scoring) while giving them a pretty decent table to work out of for rules. They could still use the ability to assault out of a Rhino, but for what's there to work with I'll accept what is being given at least.

As standard the Crimson Slaughter has their own Warlord Traits table. Though if you want you can still roll on the charts in the rulebook.
The only one of these I'm not 100% in favor of is Maddened Rage. The inability to even shoot with assault/pistol weapons really limits the effectiveness of that rule. Granted it is flavorful, but it's one I'd hope to avoid getting if playing this army.

Yes "and Stratagems". The Crimson Slaughter come with their own stratagems for Cities of Death and Planetstrike.


Relics of the Crimson Slaughter

Honestly I love all these. The prices aren't too unreasonable for points costs and you can really see the flavor in these Relics and in a couple of them, bring out the character they're meant to be carried by. All around a good batch here.

These are available for the Crimson Slaughter to use in addition to any other Stratagems they'd normally have access to.

Of these my favorite has to be Ectoplasma Weapons. The Plasmagun just looks so much deadlier unleashing shots that can cause Instant Death to Space Marines. I rather wish it was a wargear option for regular games.

Just like the Cities of Death Statagems these are added to the list of available stratagems if your fielding the Crimson Slaughter.

Of these Bombardment Fodder is my favorite just because it's hilarious. If your opponent takes the bait to kill this free unit it helps protect your other units, and if they don't try killing this unit you could end up with a massed unit of cultists clogging up the board and hurting their ability to Deep Strike (not to mention it's a free unit! Who doesn't like that?).

Once again the Altar offers three optional missions  that you can play instead of the traditional ones in the book. They are:
I like all three of these. They're all full of a lot of flavor and they look like a lot of fun to play. Though that Spectral Hurricane might be a little unfairly biasing things in the Storm of Spirits mission.

This supplement wouldn't be complete without some historic missions to field the Crimson Slaughter in! They are:

This book may not fill the tournament player's fancy, but the collection of rules looks to be a lot of fun, it offers some decent, but not overpowered/priced relics and has a lot of nice missions to choose from (even if the one with Kranon doesn't have you using a special profile and just his model). The background really sucked me in several times when I was skimming through it and seems to be some of the best written stuff I've seen from the studio in a while.

Amusingly I've heard some talk by people saying the army rules look like they'd fit Word Bearers, and outside of the Veterans of the Long War limitation I'd have to say they're right! It has a lot of the right stuff to make a very characterful Word Bearers army.

All around this book is pretty good and adds a lot of nice backstory to the game and creates some nice alternate options for playing Chaos Marines. And while this supplement hasn't sold me on starting a Crimson Slaughter army just yet, but I'll admit I'm completely tempted to now. Those whispering voices must be contagious....
By Zion