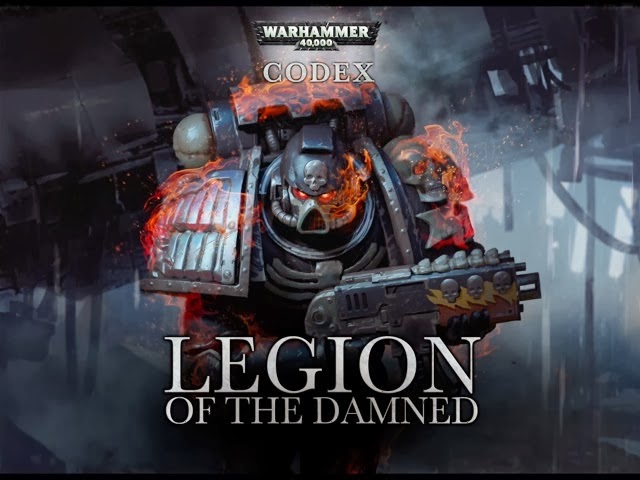 Yes, that's right, the Legion has gotten their own codex. But before we delve too deeply into what's in the codex itself let's cover the most obvious issue some people are going to have with this codex: it's just like Codex: Inquisition. It has exactly 1 unit in it and that's it. No full army with a dozen different options, just one unit you can tool up however you want. So if you didn't like the limited nature of Inquisition codex you won't like this either.

Now that we've gotten the potential rage out of the way let's dive into the book.


The art is good. I mean, the cover alone should give you an idea of the quality of the art in the book. It's all well done and I feel they did a wonderful job with it. All the images of flames licking off of the Legion themselves makes me want to sculpt Greenstuff flames onto them to try and capture that look of them being on fire.

The lore is pretty good and tries to convey a lot of different ideas, viewpoints and facts about the Legion without explaining everything, which I like. It's really easy to over explain something like this and in the end ruin the mystery you're trying to build, so I feel they handled it well.

The book introduces yet another specialized Force Organizational Chart and special Allied Detachment, much like Codex: Inquisition. The FOC requires 1 Elites slot and allows you to take up to 3 more Elites. That's right, your single unit option is an Elites option.

There is one problem with fielding a full Legion army though at the time of the release of the codex I'll go into a bit more under the unit specific rules, but it may change in the future. That said I did contact Games Workshop: Digital Editions about it via their Facebook so if anything changes I'll post an update to this article.

Now the Legion of course brings an allies chart of it's own to the mix, so let's give it a quick rundown:

Honestly not too many surprises considering the nature of the Legion. I'm just thankful for the inclusion of Sisters as Battle Brothers. Those poor nuns usually get left out in the cold on a lot of things so anything that gives them more options is always a plus in my book.

No, you didn't read that wrong, even though the Legion has no HQs, they do have Warlord Traits. If you're fielding the Legion of the Damned as your Primary Detachment then you nominate one of the Legionnaire Sergeants in your unit to be your Warlord. He then gets to roll on the Warlord Traits tables in the book or on the Legion's table, which I've provided below:
Easily my favorite in this have to be Ethereal Bolts, just because of a unit being able to threaten any vehicle on the table with their Bolters (S4+2d6=Max 16, average being 11) is kind of hilarious. The only one I feel is a bit silly is the Never Too Late, Never Too Early, only because I don't see a lot of potential use for it. I could always be proven wrong though so I won't judge too hard, I'm just not able to think up a lot of uses for it right now.

Weapons of the Damned

The Animus Malorum's description is vague on if it's a part of armor, or something carried but the effect is pretty useful. The bearer, and all Legionnaire models in his unit, have Feel No Pain. Additionally, when an enemy unit fails a Fear, Pinning, or Morale check within 12" of the bearer a randomly determined model in the unit that failed the check is removed as a casualty with no saves of any kind allowed (Look Out, Sir rolls are still allowed as normal though). For each model that dies this way the bearer's unit gains a +1 modifier to their their Feel No Pain saves (to a maximum of 2+) until the end of turn.

So it renders models dead for failing Fear, Pinning and Morale checks, it boosts Feel no Pain saves and grants Feel no Pain. I honest feel it's a pretty good sounding option to put on the board. Especially since any of your Legionnaire Sergeants can field it, not just the Warlord.

Just in case you missed it, or skipped it earlier to come down here and see what army options there are, there is only one unit to choose from. It's an Elites choice called the Legion of the Damned Squad.

Coming standard with 5 models (4 Legionnaires and one Legionnaire Sergeant (who has the distinction of being 1 point better in Weapon Skill than is normal for a Space Marine Sergeant)) and the ability to take up to 5 additional Legionnaires this unit has a pretty good swath of rules and options. So let's take a quick look.

Standard wargear is, well standard. Everyone starts off with Power Armour, Bolt Pistol, Boltgun, Frag and Krak Grenades, the same as you'd expect for Marines in pretty much any book at this point. The fun actually starts in the Special Rules:
Not too bad, except for one big issue: Aid Unlooked For. Because this rule was apparently lifted straight from the Space Marine codex it creates a major problem for anyone who wants to run a pure Legion army. As it stands at the time of writing this means you automatically lose at the end of Turn 1 because your army is not allowed on the table any sooner than Turn 2, as per the Deep Strike Rules. So unless/until this changes a pure Legion army isn't feasible outside of house rules and Apocalypse games.

So that problem aside, how can you equip your Legion units (beyond adding more Legionnaires of course)? Let's take a look:

So all in all not a bad bevy of options, especially considering that the unit comes standard with the Ignores Cover USR, and, thanks to Slow and Purposeful, can effectively use heavy weapons on the move. With the ability to take Special and Heavy weapon options as low as 5 model units also means you can be flexible on how you want to equip the units, and what sizes you want to field. It's not a bad looking option honestly and I rather dig the choices.

That's right, the Legion got an Apoc Datasheet. To field this datasheet you need 2+ units of Legion of the Damned (all which must contain 10 models) and they have the following rules: Deep Strike, Fires of Judgement, Fear and Spectral Horrors.

Fires of Judgement triggers when the units Deep Strike. All enemy units within 6" suffer 2D6 Strength 4, AP5 hits with the Soul Blaze special rule. In addition, on the turn they deploy, all of the Legion Ascendant's shooting attacks have the Fleshbane and Ignores Cover special rules (yes, someone seems to have forgotten that the Legion already ignores cover, but the Fleshbane bonus is nice, but the deep strike comes off as too risky without some way to be able to deep strike precisely and without scattering).

Spectral Horrors causes all enemy units in 12" of a model from this formation to suffer a -3 penalty to their Leadership. Not bad, all things considered and a handy bonus when considered with the other rules the Legion have, such as Fear.

Special scenario missions designed to tell tales of specific conflicts the Legion participated in. There is the Deliverance on Andraxas (featuring the Legion, Ultramarines, and Chief Librarian Tigurius vesus Orks), Hunter or Hunted? (featuring the Legion and Black Templars and High Marshall Helbrecht versus Dark Eldar with Lilith Hesperax in the army (she doesn't have to be the Warlord though), and Phalanx in Peril (featuring the Legion and the Imperial Fists versus Chaos Space Marines (who may ally in Chaos Daemons if they wish) led by Be'lakor).

While this is another "mini-dex" that is likely to send some people off the bend due to the limited scope of the army, I feel it does two things for the game that will help in the future: first it adds more varied allies into the mix and, assuming we get an errata for the Deep Striking issue, potentially a new army which looks pretty solid for it's points cost, secondly it makes it possible that the Legion of the Damned can be removed from Codex: Space Marines in the future freeing up a little room in there and allowing both to grow more naturally. Plus it gives room for the Legion to be expanded on in the future.

Now obviously there are a few issues as it stands right now. The Legion got no characters to play with, have no transport options (who wouldn't want a flaming Rhino with skulls on it?) and could stand to gain some more stuff. But for a jumping off point for them to become something better in the future, not to mention the new allies chart, it looks like a pretty good start. I look forward to seeing what is done with them in the future.
By Zion