The Imperial Knights have taken to the battlefield once again, manning their superheavy walkers to fight in the Emperor's name once more... 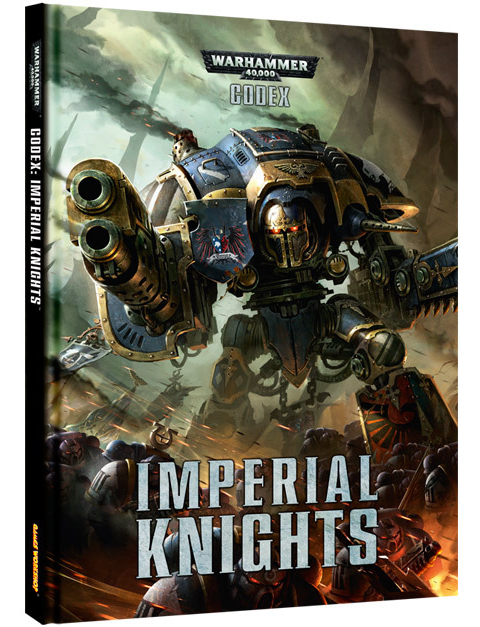 Yes, as many are probably aware the Knights have made a long awaited return to 40k with a really nice looking model kit and their very own codex. With years of rumors leading up to this point the big question becomes if they meet the excitement and wish listing people have had for a while now.

Quite honestly this is the crux of this book. A lot of really good looking artwork, a lot of new lore filling in the Knights involvement in various campaigns and battles, heraldry for both Freeblades (the knights who don't belong to a house for one reason or another) and the various Great Houses. Without getting too deep into the specifics, it's all interesting stuff and the artwork is fantastic.

This is actually a fairly short section as the army doesn't contain a wide array of models, wargear options or any characters. So what does the army bring to the table exactly (outside of cool looking models)?

First up is probably the least surprising part of this book, the fact that it lets you take Knights as your primary detachment. With the other small faction codexes doing the same this is becoming less of a surprise and more of something to expect now, but that is the biggest change as this puts an army of super-heavies into the game outside of the Escalation book. That's right, for anyone doubting that Escalation was meant to be a regular part of the game this cinches it as it's a codex. Don't panic though, no one is being "forced" to play anything, it's just a legal option for play just like someone's 4 Heldrake army is.

Now for allying purposes the Imperial Knights use their own slot that requires 1 Imperial Knight but allows for up to 3 total. The same orginizational chart is used when the Knights are taken as a primary detachment as well, though it's expanded from 1-3 Knight to 3-6 Knights instead (and in an Imperial Knights army they're all scoring to boot). And since we're talking about how they ally, we might as well cover who they ally with.

There isn't a lot of it, so let's run down what's in the book as a whole:

A bit of Risk/Reward for players who like to take chances, when a player fields an army of Knights they can choose to include Knights Apparent or Senschals in their army by rolling on a table for every Knight that is not their Warlord at the same time as they roll for Warlord Traits.

The Warlord is always a Seneschal, even if you don't choose to include Knightly Ranks in your army.

I have to say that Indomitable is my favorite of the list, but Fearsome Reputation can prove very handy if you want to pair up with Legion of the Damned for leadership influencing shenanigans. Or of you just really want to tick off your friend who plays Orks. Overally, nothing here strikes me as "bad", just very situational, like most Warlord traits.

While not a section in the codex itself I wanted to go over some of the key rules and bits of information about the Knights themselves so people who don't have the book in hand and didn't pick up the White Dwarf with the rules could know a little more about them.

First up both the Knight Errant and Knight Paladin are Super-heavy Walkers. This gives them the Fear, Hammer of Wrath, Invincible Behemoth, Move Through Cover, Relentless, Smash and Strikedown rules. Additionally they also have the ability to deal Stomp attacks as well in addition to any other attacks they do in melee.

Now, despite being Super-heavies, the Knights are far from unstoppable. Without factoring the buffs/debuffs from Knightly Ranks both Knights have a Weapon Skill and Ballistic Skill of 4, a Strength of 10, Front Armor of 13, Side and Rear Armor of 12, Initiative of 4, 3 Attacks, and 6 Hull Points. The Paladin clocks in at just a quarter shy of 400 points, with the Errant priced 5 points below that.

So here's the run down: smart targeting and spreading out your anti-tank to be able to hit from more than one side will help drop the Knights. Both have good ranged weapons, though the Errant's has a much shorter range (which it makes up for by threatening all armor saves, not just the 3+ kind). Neither are really a good idea to fight toe-to-toe with as the Strength 10 stomp attacks can severely cut down any numerical advantage you may have if you didn't manage to kill it before then. All around it's good, but killable, and priced high enough that taking one (or more) of them isn't an automatic choice for most people's armies.

In the end, good planning can nullify how dangerous they are, but when facing an army of them things might get a little unbalanced unless you're packing some good-anti tank weapons (or running something out of Escalation or Stronghold that can kill them quick).

This is not a codex I'd recommend to everyone. If you've already got the White Dwarf you've got what you need to field them as allies, otherwise maybe consider picking this up if you're really dedicated to the thought of running an all Knight army. Lore enthusiasts may enjoy this, but for the average gamer it's easily a pass unless you really want to spend $700+ USD on a 6 Knight army.

In short, your enjoyment out of this is going to vary, potentially a lot, and because of that I'd recommend skipping this if you aren't sold on it from what you've already read.
By Zion