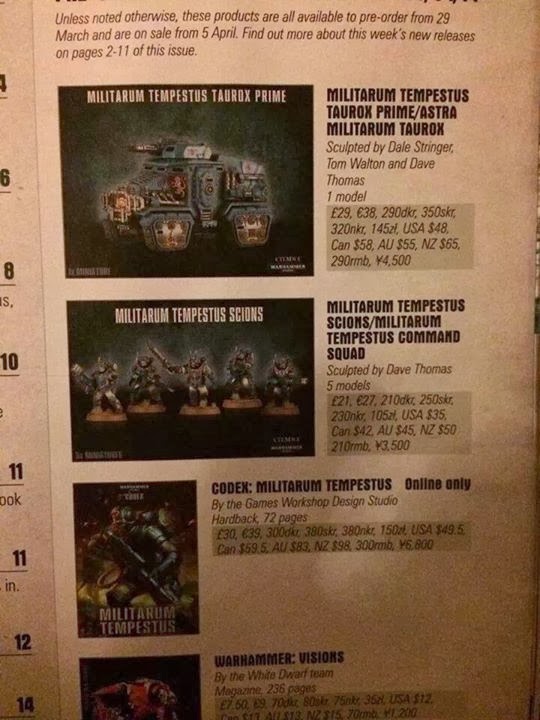 A leaked image from what appears to be White Dwarf Weekly Issue 9 has been making its rounds across the internet recently . It clearly shows two new kits due out for release on the 5th April. Also detailed is a new online only Codex: Militarum Tempestus.
The first kit appears to be a quad tread transport with a top mounted turret, the second kit is a 5 man Scion squad.

Just who are they?
Now based on the information we have a few small clues as to what they could be. Here is what I can see:

- The second kit are called Scions. Now traditionally, scions are the sons/daughters of Noble families. The stormtrooper fluff says that they are from more higher class families
- Militarum Tempestus = Storm Troopers, probably an IP protection thing to avoid a Spot the Space Marine debacle.
- The picture on the front of the codex seems to show a trooper holding a hot shot lasgun. The round thing at the butt and the pipe give it away.

Its too early to say anything of certainty from just this one image but hopefully more details will be coming soon.

From the blurred picture we can't make out a lot of detail but they do look excellent. The description for the scions states that they can be constructed as either Scions or a command squad. This clearly indicates that this will be a plastic kit, yay!

So what do you think, are these going to be a Stormtrooper Army or something completely different. Let us know your thoughts in the comments.