"Design Time" is an ongoing article series examining the mechanics and design of wargaming.

As a wargamer I think I can safely assert that you play war games to play games. It's pretty clearly the point. Unless you're only in it to paint models I guess, but if so why are you reading a game design article? (I am publishing these on a website now, I don't have to call them rants anymore, bwahahahahahaha...)

Anyway. I'm going to assume everyone reading this is here because they actually like playing their games. This is the crux of my article. People are here to play the game. They are not here to have their games play them.

All miniature wargames, well at least every one I've ever played, utilize some form of random number generation (if you have examples of ones that don't, please put them in the comments 'cause I'd like to give them a try*).

Usually random number generation is done with some form of dice (D6, D10, whatever), although cards seem to be getting more popular as well. Most games need a way to sort probabilities in such a way that an action can have a variety of outcomes, and random number generators are a great way of doing that. So don't worry I'm not going to be writing an article here about why dice are bad or some such nonsense. In fact I'm designing my own game currently and you can bet I'll be using dice mechanics in it.

The problem that can come up, though, is when games designers start taking the 'random' part of random number generation too much to heart.

You see dice aren't random. A single die is, relatively, random in that you can't predict its outcome, but butt-loads of dice are fairly predictable. You all know this. If you didn't you'd constantly be confused about why 2+ Armour Saves are good when you have them and bad when your opponent does, so I'm not going to go into it. I just need to get across that when I say "randomness is bad" no one thinks I'm complaining about dice per se.

So what do I mean by random? I mean randomized events, where neither player is allowed to influence the outcome. In a game setting it is a bad idea to take choices out of the hands of a player, or to prevent the players from planning around them (I'm going to refer to this throughout the article as 'removing a players initiative'), and yet many games continually look for new and exciting ways to do this!

I'll give you an example of when a random event removes a players initiative instead of giving them a choice on how to react.

The Tervigon: Spawning All The Babies!

Everyone loves the Tervigon. Even if you got sick of Tervigon Spam in the last edition you have to admit that the concept is pretty novel (and, personally, I freaking love the model). As the Spawn Termagants rule is currently written every time you choose to spawn babies you roll three dice and get that many babies, but if you rolled any doubles while doing that then the last Termagant leaves a cork behind as it crawls out, and you can't spawn anymore that game. Due to probabilities you have a 50% chance of corking out each time you spawn.

I'm not a fan of this rule. It takes all initiative away from both players. You just have to hope for that 50/50 chance going your way. It's rare but every Tyranid player has had that game where their Tervigon is just on fire (the baby equivalent of fire, not actually on fire, I'd imagine very few gamers have ever played a game with a Tervigon model they lit on fire) and never corks out. It's extremely frustrating for your opponent. It's just as frustrating for you when you roll one two 1's and, well, any other number, your first turn and suddenly a whole part of your strategy is just gone. 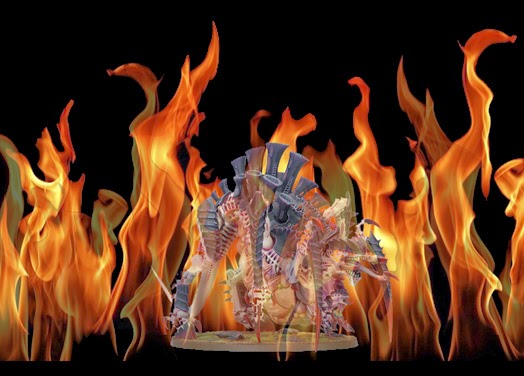 Arrrgh, why did I think this was a good idea?!

What I would prefer is this;

Brood Sac: The Brood Sac, while a powerful tool of the Tyranid war machine, is also extremely vulnerable. Whenever a Tervigon takes an unsaved Wound roll a dice, on a roll of 5+ the Brood Sac ruptures and the Tervigon is no longer able to spawn Termagants that game.

It's pretty simple to see why I think this is better; it gives all the control to the players. I mean, sure, you still have to hope that they roll that 5+ but you, the player, get to set up all the conditions for it. As the enemy you get to decide whether or not to pour firepower into that Tervigon and hope to cork it up yourself, or, as the Tyranid player you get to decide whether the danger of that happening is worth hiding the Tervigon as best as you can (at the cost of potentially having that it way out of place compared to the rest of your army).

Remember, I'm not trying to fix the Tervigon here. Fixing Tyranids would be a loooooooooong article but I may tackle it eventually, so it doesn't really matter if the Tervigon corks out on a 5+ or a 3+ for the purposes of this article. What I'm trying to get across is the concept of putting as many choices into the hands of players as possible.

Mr. Internet Writer, When SHOULD Things Be Random?

I'm glad you asked that Timmy!**

I freely admit that not everything in the world of gaming needs to be in the players control. Sometimes things really do just need to be random. Appropriate random events are those situations where the players should not reasonably be expected to influence the outcome. This can be for design reasons (if you are dicing off for first turn that needs to be fair, rolling up a random mission so that no player gets to choose their advantages etc), or thematic reasons (while battling over a long forgotten temple the two armies awaken a malevolent god, roll a D6 to determine how he vents his anger).

An example of a really well done rule that uses a random mechanic is the Champion of Chaos rule in Codex: Chaos Space Marines. The Choas Boon Table is appropriately random, in that you can't power game the mechanic to get the result you want, and it fits thematically. Grandfather Nurgle says: "Oh, you wanted tentacle arms? Suck it, punk, I gave you a sphincter for a face instead!" 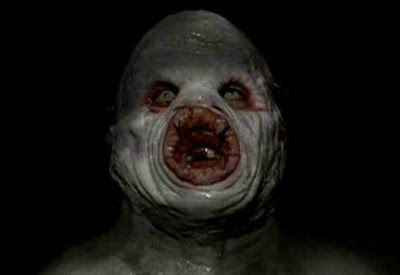 This. I gave you this.

However the actual implementation of the rule is entirely up to the player. You have a large latitude of control over whether or not your units get into combat, and the times you don't have control are just fine, because then it's the opposing player exercising their initiative. I mean we are the players, right? The game shouldn't be playing us.

However, with a little thought, it's not hard to see how many of the random events in our games could be improved by changing the way in which they random. Are random. Randomize. Whatever.

Mysterious Objectives Should Be a Little Less Coy. Seriously, What Drama Queens.

For the most part I really like Mysterious Objectives in 6th Edition 40k. I like how it makes them more interactive, and I like how it gives a bit more reason as to why your army gives a flaming turd about these specific objectives in the first place.

Imagine however if, after deployment but before first turn, you rolled for all of the objectives right off the bat, including their value if that's random to! How would your game change if you were facing a Flying Circus and knew that mid-field objective was a Skyfire Nexus? How would your opponents? What if you had to choose between your last Troops choice rushing for a 4 point Sabotaged Objective or a 2 point Stealth granting Objective? Forcing these choices on the players make the games more interesting, more interactive, and much more tactical.

Sure you can still end up with a 4 point Sabotaged Objective now, but there is no choice in the matter. You just roll up to an objective and hope its good. Sure the opposing player is still supposed to stop you from doing so, but there are usually quite a few Objectives, and they are all equal until rolled, so the urgency is a little lacking. It becomes a very reactive game. You react to them getting a good or bad roll when they reveal the objective, instead of acting beforehand.

If Random Elements Are So Bad Why Are They So Prevalent?

This is a trickier question, since I don't have the ability to read minds (yet). Random tables and elements are certainly easier to write, since there's less cause and effect to have to balance (all elements are theoretically equally likely to come up so you don't have to worry about players gaming the system to score the best one). In addition a lot of game designers play table-top role-playing games where random tables are significantly more prevalent (and a much better idea, RPG's are an entirely different animal), so I think there is a certain amount of 'cultural inertia' towards including them. Sorta like how I put cheese on everything even though I know it's not always a great idea (but always delicious).

(I imagine this is what Games Workshop will be renaming conclusions pretty soon.)

So in conclusorium my point basically boils down to this;

While random chance and the vagaries of fate will always be a part of our games (and, frankly, that's ok), we need to make sure that random elements are always controlled in such a way that they provide players the maximum amount of initiative. That defaulting to 'roll on a random table' is poor, and in some cases lazy, games design.

Wargames are about two or more players, and their armies, facing each other across a table. As much as is possible all rules should be directed towards those players, and helping them play the way they want to, or tell the story they're writing. After all, we're here to play our games. We aren't here to just roll dice randomly. That's what gambling is for.

*For the purposes of this article chess doesn't count. Smart ass.

** If even ONE reader of this article is named Timmy I can die happy.