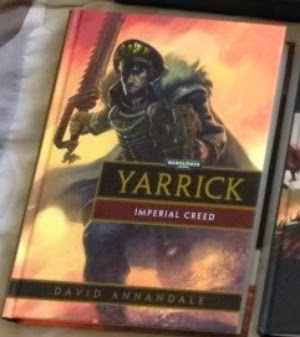 
"A fairly enjoyable novel that while somewhat slow-paced still manages to tell a good story and explore a very well-known 40k character before he became well-known." - Lord of the Night @ Talk Wargaming

David Annandale is an author whose works I have had mixed experience with. His novella Mephiston: Lord of Death was a delightful read, while his Space Marines Battles novel The Death of Antagonis was disappointing and dragged. Yarrick: Imperial Creed fortunately does not disappoint but neither does it feel as good as Mephiston, perhaps due to a slowed pace and many paragraphs of the book devoted to introspection and philosophizing about the Imperial Creed itself. And a certain character from TDoA returns, and not one of the better characters sadly.

Sebastian Yarrick, the Hero of Armageddon. A man whom even the Chapter Masters of the Adeptus Astartes kneel to, who single-handedly rallied the planet of Armageddon to fight back against the terrifying Ork Warlord Ghazghkull Mag Uruk Thraka. But who was Yarrick before he became the man that even Orks fear, before he became a hero renowned by all. Once he was a simple Commissar attached to the 70th Mortisian Rifles regiment under the tutelage of the Lord Commissar Rasp. Where did the legend begin? The planet Mistral whose murky politics mask an even more dangerous threat, a threat that will be the crucible that decides whether Sebastian Yarrick will live to become a hero or die unremembered like so many millions of the Imperial Guard.

The story in Yarrick: Imperial Creed is an origin story, or at least it's partly one. The book tells the story of Yarrick's very first deployment with an Imperial Guard regiment, and the first real campaign that he undertakes on the planet Mistral. Rather than an origin story for Sebastian Yarrick this is an origin for Commissar Yarrick, the entity that the man has become. Annandale focuses on how Yarrick deals with the myriad responsibilities of a Commissar and the necessary political agenda that his station demands, and how the battle for Mistral slowly becomes a lot more than a simple insurgency. I felt that the story dealt quite well with how the Imperium often creates it's own problems through the moral corruption, rather than actual corruption, of those in power and how those problems tend to spiral out of control, and before you know it the Imperium has another warzone. One thing that I think the story could have benefited from though is one or two more personal stories besides Yarrick and Setheno's, perhaps Commissar Seroff or one of the other secondary characters.

The characters in the book are fairly well done. Yarrick himself reads like a very driven man with a strong-will which is what makes Yarrick who he is, an indomitable will that can never be broken, and in the book we see how that will served him in his early years and the forces that helped to make it so strong. His ability to guide people and strengthen them through that unbreakable will is also explored and it shows a character who considers himself, and his office by extension, as that of a symbol that is very important to the men and women he commands. The Commissar Yarrick rather than the man Sebastian Yarrick. I would have liked to see some flashbacks to his time as a Stormtrooper but apart from that I had no problems with Yarrick himself. The second main character, Sister Superior Setheno, returns from Death of Antagonis and we get to see her early years as well, however I disliked this character in DoA and while she wasn't the larger-than-life Mary Sue she was in DoA, she didn't feel like a unique charater here, rather just another puritanical Sister of Battle. The other characters were fairly interesting, though I think that some were underused, particularly Commissar Seroff whose humorous personality and similar inexperience could have provided an interesting parallel to Yarrick who is more serious and has the experience of war that Seroff doesn't have. The assassin Vercor also felt underused, I would have liked to see how she took Setheno's advice and resolved her own issues in the end, rather than being forgotten.

The action in the book is written well enough in most parts, although Annandale seems to have his Guardsmen close to melee at any chance he can get even when it seems tactically better to stay at range, which would be understandable if he explained that the Mortisians prefer it that way but he doesn't. The combat is clearly choreographed and focuses on infantry fighting infantry with the occasional tank thrown in, but this is primarily a novel where the action scenes focus on Guardsmen cutting rebels apart with chainswords. Though near the end where it starts to get repetitive Annandale changes the game by introducing more dangerous enemies and by bringing in the Sisters of Battle whose armoured phalanx style of combat is a contrast to the almost horde-rush tactics of the Mortisians. The few scenes involving tanks were some of the best parts as they focused on Yarrick and his men finding alternative ways to fight them using either spur-of-the-moment tactics or intelligent use of the environment. I did enjoy what Annandale brings into the book in the final few chapters, how durable they were and the kind of threat they posed both physically and mentally, though I think the ultimate antagonist of the book could have done more than just stand there and scream at the Guard.

The pacing of the book is uneven, I found that the story began to drag half-way in when Yarrick and the Guard are battling and trying to stay alive. Some of the earlier parts, mainly those that dealt with the politics of Mistral dragged as well, and one particular scene involving the character Krauss that felt completely pointless since we never saw what the point of it was. Annandale doesn't make any lore mistakes here like in DoA, and while the book did become slow at times the remainder of the book was still enjoyable. The first person style for Yarrick and third person style for everyone else nicely separated Yarrick's narration from the others and gave us a deeper insight into Yarrick himself, although the philosophizing on the Imperial Creed and nature of duty and symbolism was wearing thin by the end. If there will be future Yarrick books I think they should focus on how the people around him affect Yarrick as well as how the events around him shape who he is.

My favourite quote is of course from Yarrick himself;


"Let the heretics know what they are up against. Teach them what fear really is before you send them to hell."

The ending was mostly good though I think it could have been better, unless Annandale is planning a series in which case I see that he is leaving plot strands to come back to, and wraps up the story as you'd expect from having read the book. No twist ending and we see how Setheno became the way she is by Death of Antagonis, and that Yarrick has been affected by his time on Mistral as well. I would have liked to know what the final fate of the planet would be, but I suppose it's implied. Ultimately I think the book ended well and apart from closing the story there isn't much else to say about it really.

For a mostly good story that fleshes out who Commissar Sebastian Yarrick is and a few enjoyable battle scenes I give Yarrick: Imperial Creed a score of 7.1/10. I think that this is a novel that is good, but is prevented from being very good or great by a lack of any really good characters beyond Yarrick, a slow pace from the middle of the book until the final chapter and an antagonist that felt anti-climactic. Really though my key quibble with this novel is more a personal one and has nothing to do with the writing, it's the very fact that it exists. Sebastian Yarrick is one of the coolest characters in 40k, he's a normal human being but he is respected by even the Astartes and the Orks themselves actually fear him. The fact that a Yarrick novel doesn't cover the Second War for Armageddon bothers me because that is Yarrick's best moment, it deserves a novel of it's own and instead this potential Yarrick series seems to be focused on Yarrick prior to Armageddon, which to me just makes it another Imperial Guard Commissar series only without the large fanbase and long-running stories of Gaunt's Ghosts or the wonderfully dark humour and comedic approach of Ciaphas Cain. If Yarrick is going to get his own series, it should focus on the One-Eye Yarrick that we know, not this young Yarrick that apart from his incredibly strong will isn't really different from Ibram Gaunt. I would say if you are an Imperial Guard fan you might enjoy this book, but if your looking to read about the Yarrick from the army books, that isn't what this book is about sadly.