BLACK LIBRARY REVIEW: The Tribute of Flesh by David Annandale 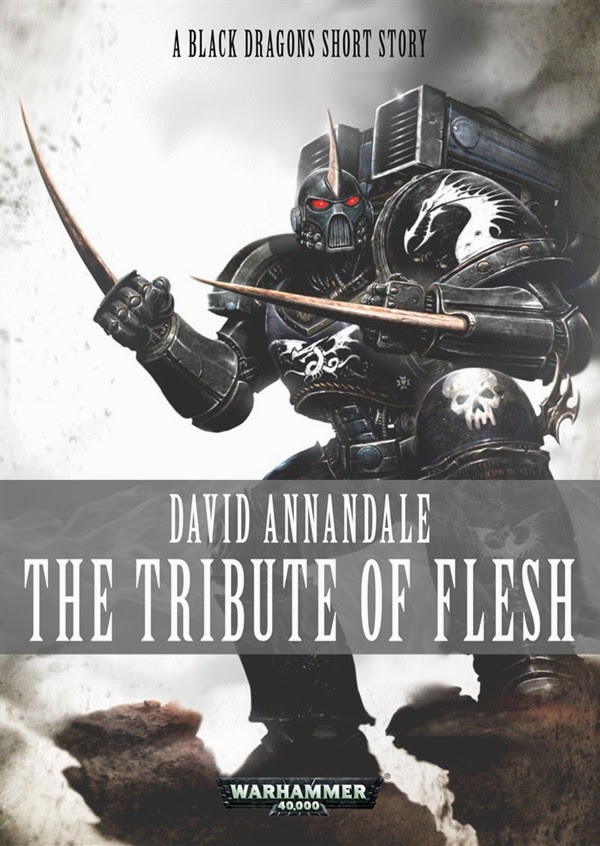 The Tribute of Flesh by David Annandale. Originally published by The Black Library, March 2014. Approx. 28 pages.

The Tribute of Flesh is a short story that appears to be a companion work to Annandale's Space Marine Battles entry The Death of Antagonis. Generally, I am a bit apprehensive of these titles if I have not already read the "main" work, for often the events transpire after those depicted in the novel. There is a copy of Antagonis sitting on my shelf for the longest time now, but right now I only had the time to fit in a short story. So, hoping that there were not too many spoilers included, I opted to read the short first.


So far, I only have two works by Annandale; both of them 1,000 word shorts. First was the Yarrick short Evil Eye, which was rather underwhelming. Second was the excellent Angels of Death short The Judges, in Their Hunger, featuring the Carcharadons, which was very well done. And to be honest, it's hard to imagine dropping the ball with the Black Dragons. I mean, look at them, the are custom-crafted for coolness. Lethal good guys wearing black? Check. Horns and bones, sheathed in adamantium? Check. Power armor festooned in dragons, skulls, and fire? Check, check, check!

Alas, I cannot say that Tribute is a great story, or even a very good one. At best, it is unmemorable. And the main cause of this is a lack of any characterization that would spur emotional investment.

The space freighter Absolution is in dire straits. It has been taken by some of the most loathsome xenos to plague the Imperium, the sadistic Dark Eldar. They have relegated the near entirety of the crew to the position of torture slaves. However, there is a small pocket of crew members that form a meager resistance, based on survival. One such member sacrifices her life to send a distress beacon.

Luckily for the crew of the Absolution, that weak beacon is received by none other than the Black Dragons. Their Second Company, led by Captain Volos and Dreadnought Brother Nithigg, answer the call. The reader who has not yet read Antagonis can assume that these characters were featured in it. Thankfully, there are few references to that work, so you can start fresh with the characters here.

The problem is, the characters are not that intriguing. None of them. Not the Black Dragons, not the humans, and certainly not the dark eldar. You can't even argue that there is no room for it in a short story like this, for there are plenty of Black Library shorts with richly developed casts. Perhaps Annandale presupposes reader knowledge of the protagonists based upon whatever treatment they received in Antagonis.

The resulting effect is that, after a solid opening page, these Astartes become static. You get no inkling as to the pathos of these warrior giants, it becomes all novelty. Successors of the Salamanders, the Dragons are more sympathetic to the fates of humans than other Chapters. And yet, though it says that they value and respect their lives, how is this solidified? It isn't. A Chapter whose physical deformities evoke horror in those they would save. A Chapter whose genetic composition alone attracts the perennial attention of the Inquistion. How is it handled? An attitude resembling "yeah, we're kind of used to that".

The humans fare no better. Well, actually, there is only one human of note, one Regine Sorina. We see her scampering and foraging about in the beginning, and then she disappears for a bit until she assists the Black Dragons. Bordering on interesting, she is ultimately remanded to the job of "plot device to advance action". Matter of fact, once you read what her job is on the ship, coupled with the name of the story, you will know exactly where this story is going two or three pages in.

Worst of all might be the treatment given our antagonists, the dark eldar. Sadly, the intriguing baddies are given the most generic representation. They chew the scenery, talking like stock bad guy tropes. They are bad creatures that do vile things for shock value. There is no attempt to capture their twisted mentalities, to portray their fighting styles as balletic mayhem, seeking to maximize pain and suffering. No in-depth attempts to describe their mystical technologies are made. They run, ride jetbikes, shoot splinter rifles, and roll in viscera like pigs in.....well, you get the point.

I know, a lot of criticisms, right? I actually almost gave up halfway through, but then the fighting picked up some. The battle choreography tendered to the Black Dragons is quite exciting and engaging. But it was all over too soon, crashing into an attempt at an emotional ending centered around characters I cared nothing about.

A shame really. I wanted to enjoy this story, and can't say that I totally didn't, but I don't see myself reading it ever again. And now I also feel some trepidation about dedicating time to a full-length novel surrounding these characters (the Chapter is still badass).

Here's what it is:
There's nothing wrong (especially in tie-in fiction based on a tabletop wargame) with simple plot structures. Setting + combatants + reason for fighting = story. It is the onus on the author to make us, well, care. And it's not here. This story features a dynamic Chapter, and a dynamic alien force, both given criminally lackluster treatment.

Great cover here. This is the full version of the piece by Clint Langley that graced the cover of Best of Hammer & Bolter: Part 2. It really captures the essence of the Black Dragons. A little more action in the empty space in the top left would help things. But a great pose and attention to detail on the Astartes.

The Tribute of Flesh is available to download from Black Library now.


written by Hachi Snax
By Unknown