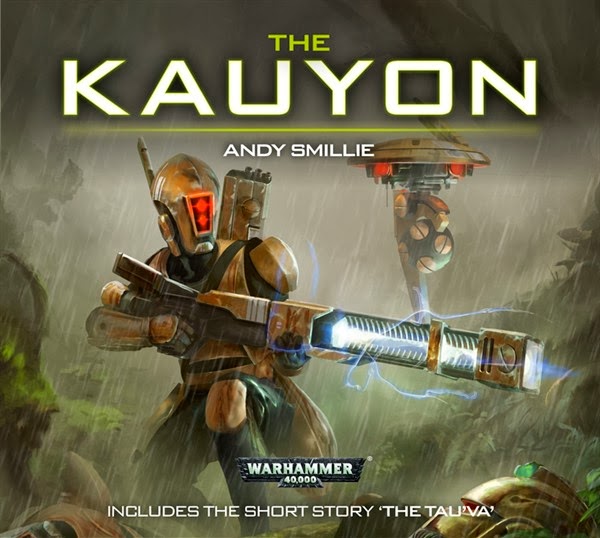 Lord of the Night reviews the very first Tau Empire audio-drama, The Kauyon by Andy Smillie.


"An enjoyable and exciting audio that not only explores the Tau Fire Warriors but also boasts a great story and wonderfully read battle scenes." - Lord of the Night @ Talk Wargaming

The Kauyon is an audio that I was very pleased to get, i've always wanted the Tau Empire to get their own series of novels and while we aren't there yet, The Kauyon may be a step in that direction. Admittedly Andy Smillie is an author whose work I have either not read or what I have read I found mediocre, well there is no doubt in my mind that The Kauyon is the first of Mr Smillie's work that I have truly enjoyed from start to finish, and although one or two things did give me pause, the audio has definitely become my favourite Tau Empire piece published by Black Library so far.

The patient hunter gets the prey. When Tau Pathfinder Kal'va is left the sole survivor of his squad after a brutal attack by Imperial forces he finds himself forced to operate alone, a strange and new concept to a bonded Fire Warrior. With only a few Drones at his side Kal'va must find a way to outwit the Imperials that murdered his team, fulfill their mission in the name of the Greater Good and exact revenge for the fallen. But with Kal'va outgunned and alone in the jungle, can he wield the battle-tested wisdom known as the Kauyon and stand up to the Emperor's own mailed fist, the legendary Adeptus Astartes?

The story in The Kauyon is self-contained and shows how a Tau Fire Warrior team functions, and how when the deep bond they have forged is broken, a single warrior is forced to act. This felt very much like an action movie where the sole survivor goes to wreak revenge on the soldiers that killed his team, only in this story the soldier isn't a big heavy weapons expert, it's a lone sniper with one shot remaining and a team of Drones that he must wield with as much care as a rifle. I enjoyed the idea of a single Tau stalking the Imperials, using the idea of the patient hunter and ambush tactics to wittle them down until he could finally achieve both the mission and revenge, and interspersed with flashbacks to what caused him to be alone and the bonding knife ritual that all Tau warriors undergo showed not only how deep the bond is between Tau Fire Warriors, but also a nice look at the warrior culture of the Tau that we haven't seen much of so far outside the Codex. It's the deep details you'll find in novels and audio that really add character, and this audio has a fair few of them. I only wish it had come with a script so that I could actually understand the Tau curses that Kal'va uses frequently.

Only two characters in the audio actually matter in any real sense and the main one is Kal'va. I quite liked the idea that Tau almost never operate alone and even then the idea here had double meaning in that not only is Kal'va alone literally, he is also alone mentally. He has no bonded warriors left anymore, he is no longer one of the whole. He is the whole. How Kal'va deals with that makes for an interesting story as he hunts the Imperials, and a few details sprinkled about give hints towards his life that could make for interesting ideas in future Tau stories. I also quite liked the mantras and maxims that he quoted as the audio went on, the references to fire and the Greater Good belief that unites all Tau gave character to the Fire Warrior as an idea rather than Kal'va himself, but it was still interesting. The only other character that mattered was the unnamed Techmarine that serves as an antagonist, an interesting choice for a Space Marine adversary, but it was his presence that spurred Kal'va on for the most part, and his actual appearance gave us an idea of how some Space Marines view the Tau as opponents, but other then that not much was revealed about him.

The battle scenes were the very best part of the audio. Not only were they read very clearly, there wasn't a single movement in combat that I was unclear on, and given great sound effects to immerse the reader, although sometimes I think they had the sound of firefights where there wasn't any, but the audio is a great example of a character having to fight smart. Kal'va is no match for any of the Imperials out in the open, so he must use his intelligence and the resources he has to not only win the battle but also to shape it and guide it in the right direction so that victory becomes possible. The depiction of Drones was very good as well, their variety and coordination showed how the different kind of Drones work together to achieve things in battle that alone they would never be able to do. My real gripe with the audio is that I felt early on when Kal'va fights an Assault Squad with another Pathfinder, they win far too easily. The idea of two snipers running and firing at five Assault Marines and killing them before they can close the gap is way too much, especially afterwards when more showed up and they killed them too. That was the scene that I felt really should have been done better, or perhaps those Astartes should have been featured again later rather than even more of them coming in for the fight. That flaw aside, the battle scenes were very well done and I liked all the notes and uses of Tau technology, and how much it differs from Imperial technology.

The pacing was done fairly well, the audio went at a nice pace and lasted for about fifty minutes or so. The flashback scenes came at fairly appropriate moments and didn't interrupt the battles but rather the long moments of tracking and introspection that Kal'va indulges in. The voice acting was quite well done, considering that Toby Longworth voiced the entire audio by himself, the Tau voices are distinctive enough that it's clear when a Tau is speaking or a human is speaking, but they are still completely understandable, although the Tau curses went over my head. The sound effects and background music were melded with the narration nicely, although I think Black Library need to make a sound effect for lasguns firing rather than use bolters firing in every scene, the Tau weapons sounded very crisp when they fired and I think it conveyed the power behind a burst cannon or a railgun quite well.

My favourite quote, I think is this one for the context of it;

The ending was well done, although I think the short story that followed titled The Tau'va cheapened the ending of The Kauyon, but I liked how the latter resolved itself and how Kal'va earned his revenge in those final moments. The final confrontation was also well written, rather than have Kal'va suddenly be able to match a Techmarine, Smillie has the conflict resolve in a way that is consistent with the intelligent and devious way that Kal'va has fought the entire battle in the audio. I think the thing that would have really improved the ending though is if The Tau'va had not been written and The Kauyon was the sole audio on the disk, or if the short story hadn't connected with the longer one in the way that it did.

For a good story that is hopefully a sign of more Tau releases in the future and some damn good battle scenes that really feel like the author sat down and thought out how a character would win a guerrilla warfare campaign against Astartes, I give The Kauyon a score of 8.1/10. If the few flaws I mentioned hadn't been there I think this audio would have earned a higher score but while they didn't make the audio bad, they prevented it from being great. But that aside any fan or player of the Tau Empire should get this audio, it is after all devoted to the Tau kicking ass and taking names, but I think any fan of 40k could enjoy this provided that you actually like the audio-dramas.