Bow Humans! Pimpcron has arrived with rules for creating Custom Warlords!
Everyone (yes everyone) has dreamed of making their own Warlords at one time or another, and many of us make up backstory fluff for our armies. But without knowing GW’s point worth of each stat, weapon, or wargear, how would you know what it should cost points-wise? Well, what we have here is a simple and not-too-cheesy rule set for creating your own Warlord for casual games. Yes that’s right folks, your Chapter Master Badass McTeethkick of the Screaming Yetis can finally be realized! 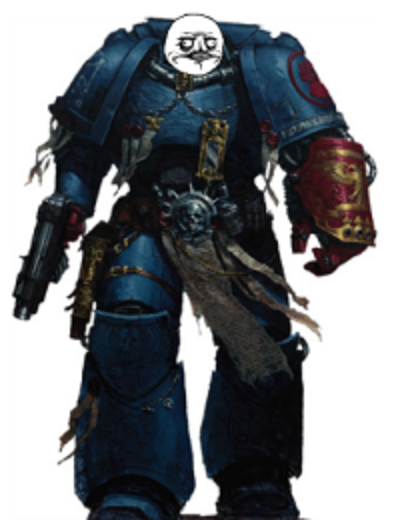 Choose a Standard HQ Choice: Start with a standard, un-named HQ choice from your army and add all of the options you want from their normal options. But add the following choices to his/her/its entry.

25 pnts. – Add a maximum of one Universal Special Rule to your Warlord.
50 pnts. – Chooce 1 unit type (Ex: Carnifexes, Helbrutes) as a Troop choice that normally wouldn’t be.

Special – You may choose wargear that one of your units can take but is not normally available to your Warlord. Add the cost of one entire model that can take that wargear, plus the cost of the Wargear. If the wargear is included in the base cost of the model, then just add the cost of the entire model. (Ex: A Necron Overlord wants to take a Rod of Covenant like his Triarch Praetorians, just add the points for 1 entire Triarch Praetorian to your Warlord and give him the Rod.)
Special – You may make one Troop Squad into “Emperor’s Own” by adding a single Universal Special Rule to them. Just as +30% to their cost (Ex: the unit costs 100 points with all of their wargear you chose, they now cost 130 points and have a Universal Special rule of your choosing). For the people who “aren’t not so good at number letters magic”, multiply the total of that squad’s cost by 1.3 to get your final cost including the Universal Rule.
Now it’s confession time for old Pimpcron. Grab some nail polish, pillows, and Teen Magazine and we’ll have a good old fashioned slumber party to gossip. You can brush my hair.
I have always loved Flayed Ones; always. I asked them to Prom but they already had a date. I stalk Flayed Ones on Facebook and Twitter. I joined a book club just to be near Flayed Ones once a month. They smell nice but I can’t work up the courage to talk to them. Ever since I first saw a picture of crazy Necrons covered in gore, I knew they were the unit for me.
But the problem is: GW seems to hate them. They have a very lack-luster stat line with almost no special rules to prop them up. And since 6th edition hates assaulting Infiltrators and Outflankers, they are even worse. But they are still my baby. So being the love-struck Fanboy that I am, here is my Flayer Lord as an example.
The Flayer Lord - 265 points
Basic Overlord, Warscythe, Phase Shifter, Res Orb
Personal Traits: Master of Maneuver (He and his unit can Outflank)
Universal Special Rule: Zealot
Special Troop Choices: Flayed Ones
Emperor’s Own Unit- 338
20 Flayed Ones with Feel No Pain
I change it from game to game. Maybe Shred or Rending sometimes.
So I attach him to the Special Unit and while he is alive, they get a 4+ Sv, 5+ Feel No Pain, then a 4+ Reanimation Protocols. Tough unit, plus his Zealot also makes them all Fearless.
Can these guidelines be cheesed out and exploited? Sure. Anything can be exploited. But if you have to worry about that too much, you need to find new friends. There I said it. Share this article on their wall to let them know gently.
I say if it fits their fluff and isn’t just taken to cheese their army, let them do it.
By Pimpcron