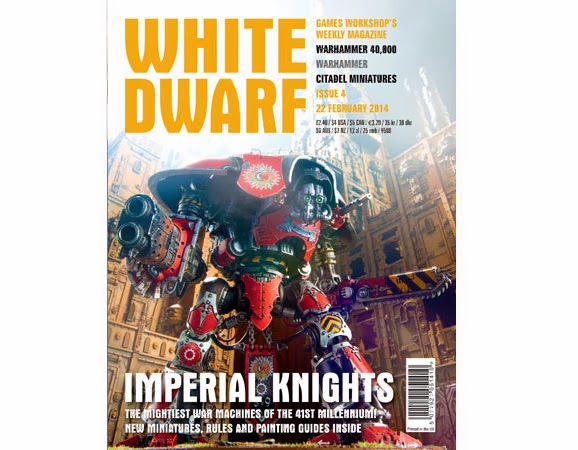 Alright peeps, it's time I throw my hand in the review pie, pull out a supple piece of it's bitter sweet goodness and take a hearty bite. Let's talk WDW - Issue 4: Imperial Knights - A.K.A the $140 mini titan.


Well, unless you've been under a rock, it's no news that this issue is all about arguably the most significant kit that GW has put out...ever, the Imperial Knights. From jump street we get inundated with pics of this bad boy. Full shots, close ups of the upper torso, action shots, different paint jobs..it's like the Playboy version of this model kit, it's just missing the fold out centerfold. The one thing it does lack is a decent size comparison shot. You do get a shot of some Eldar infantry standing at it's base, but no real side by side, other than the already leaked and widely discussed Metal vs. Monster of the Knight and Tyranid close up shot.

We also get a chance to look at the rules of both versions (Knight and Paladin) of this behemoth, point costs, and special rules. Something to note, is that though it gives you the special rules, you don't get what those special rules mean. Most are in the main rule book, but there are a few that aren't.  "Invincible Behemoth" and "Strikedown" are the two specific rules to mention here. Not sure if they are in the apocalypse book, or if they are going to be explained further in the incoming codex. 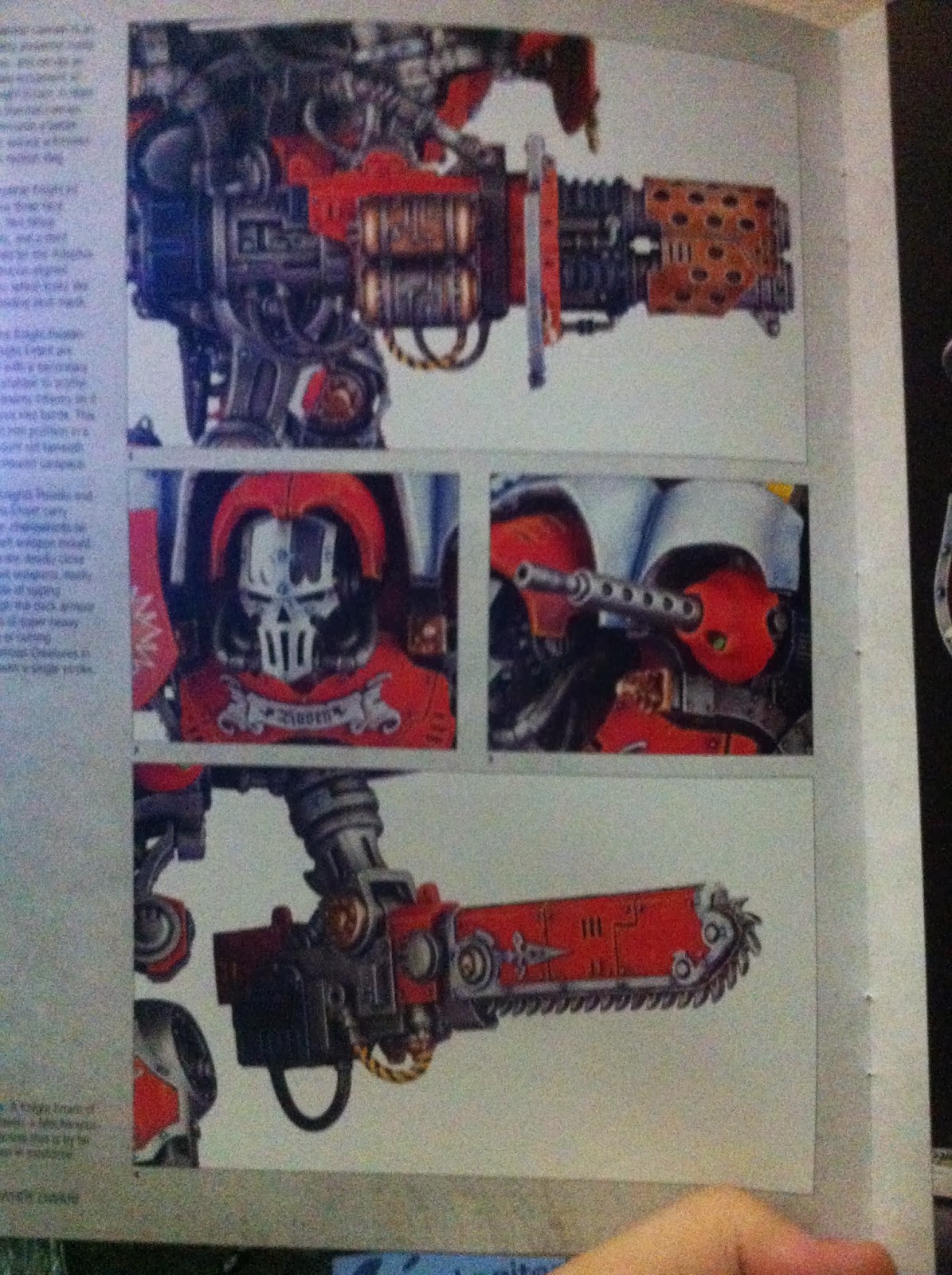 Continuing to lay on the Imperial Knight sauce, we get paint articles, assembly articles, tips, tricks, and all kinds of stuffs on how to put this kit together and slap the paint on him.
Finally we get the insight as to what caused the spark of inspiration, all the way through to the finalizing of the new kit showcased in this weeks edition.
Other than that, it's a smattering of whats coming out next week, and some "here's what our staff paints" sections, standard fair for the pamphlet. 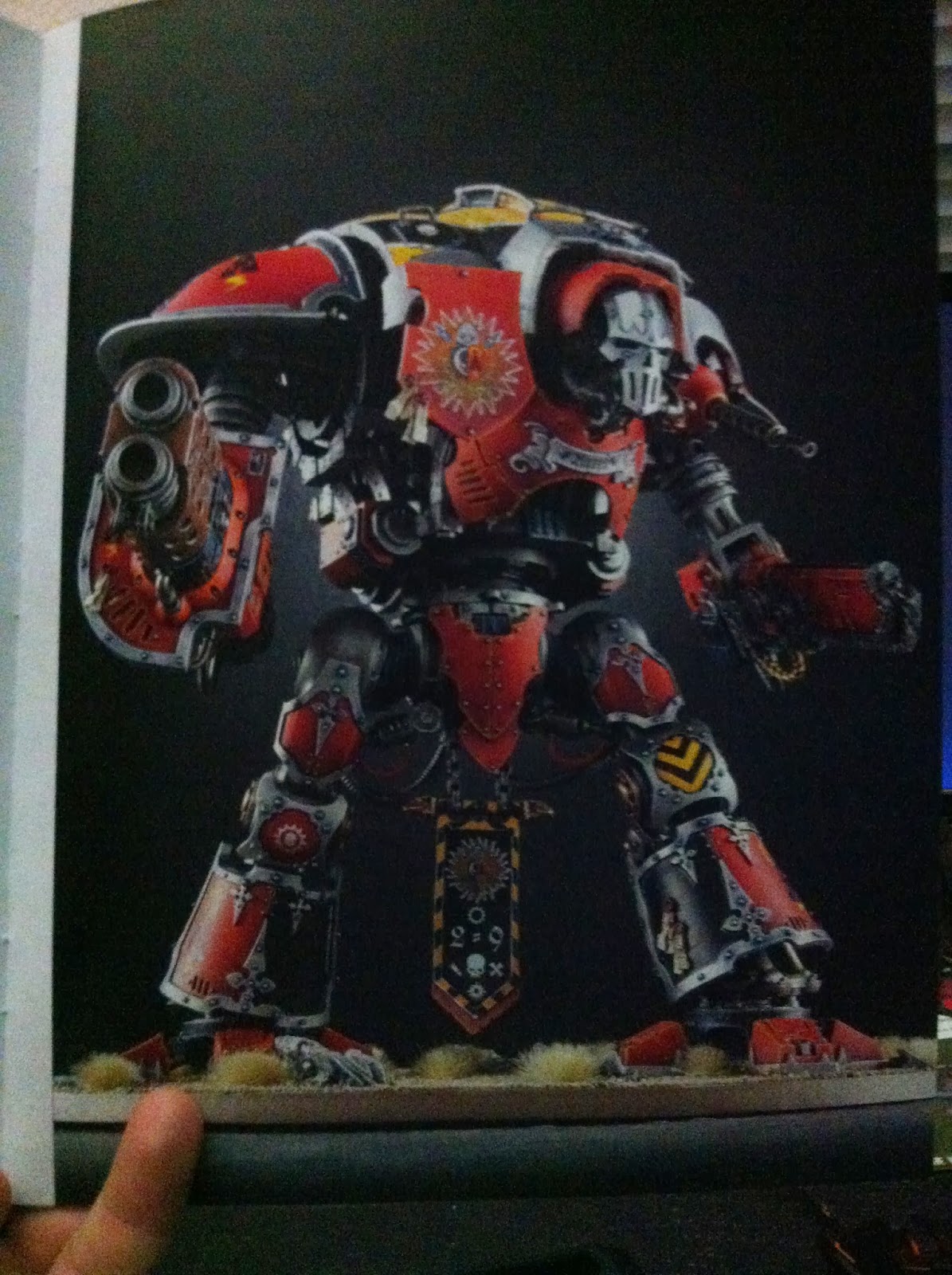 Out of all the weeks so far, this one would be the one to buy, ESPECIALLY if you're a roundbaser with the flair for Imperial/Chaos variety. It has the rules for the beast, some decent tips and tricks for getting him painted, a huge variety of shots of the existing knightly orders and some assembly tips - pay attention to the "rotating torso" tip they give, it was actually pretty handy. Seriously though, even if 40k isn't your thing, it's not a bad pickup to get GW's way to paint chevrons, 3 different armor colors, dark metal, and trim.

Keep rollin' those 6s peeps, and I'll catch you on the flipside!