There Be Pirates! Update 1

Every Game Needs A Name

When it comes to naming things I'm pretty awful, back in my Fumbbl days I'd come up with all manor of stupid generated names to solve the issue of actually thinking about it. That isn't going to wash here though, this Pirate Skirmish game needs a catchy name, preferably a piratey name.

The thing is, do I stick with a location based name such as GW's standard method with games like  Mordheim, Gorkamorka and Necromunda? Or something a little more generic? It's clear to me that I need a glossary of relevant pirate terms that could be worked into a games title - here goes.


Initial thoughts are going with a simple name such as... 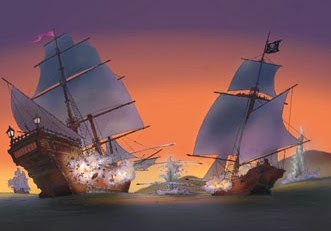 A general term for the vantage on another ship of absolute perpendicular to the direction it is going. To get along broadside a ship was to take it at a very vulnerable angle. This is of course, the largest dimension of a ship and is easiest to attack with larger arms. A "Broadside" has come to indicate a hit with a cannon or similar attack right in the main part of the ship.


The Human Vessel Progress Update One

Progress on the ship has begun.

Firstly, as I mentioned in the initial post I have to raise the deck slightly to account for the railings being higher than the models. 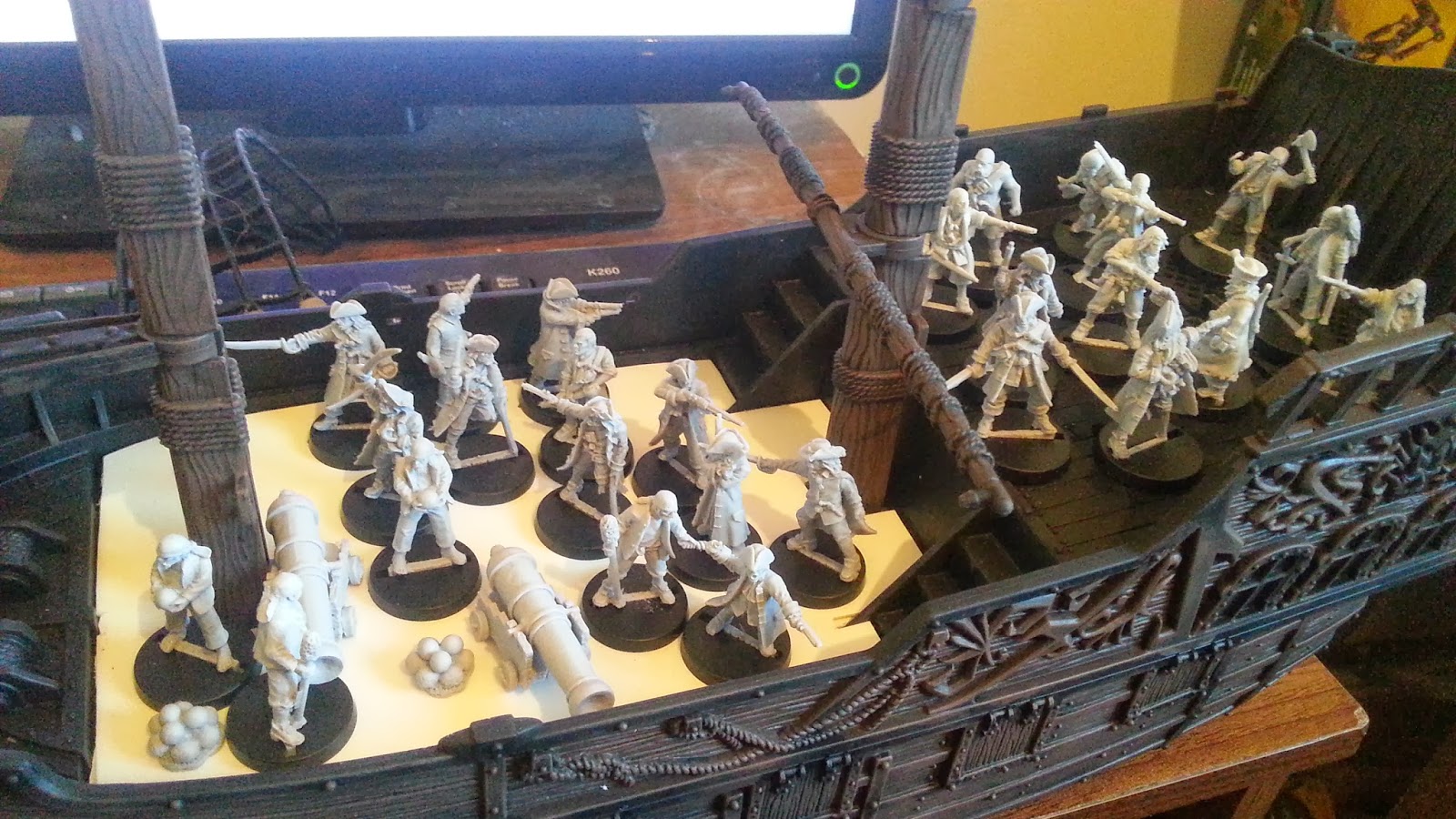 I acheived this by cutting out some 5mm Foamcore and cutting it to the correct size. I've still got a bit of work to do on this though with some 1mm balsa strips which I intend to use for the boards on the floor.

Another element of the initial floor I want to keep is the grating so I've cut it out as seen below. This will be glued to the foamcore and embedded with the balsa wood strips around it. 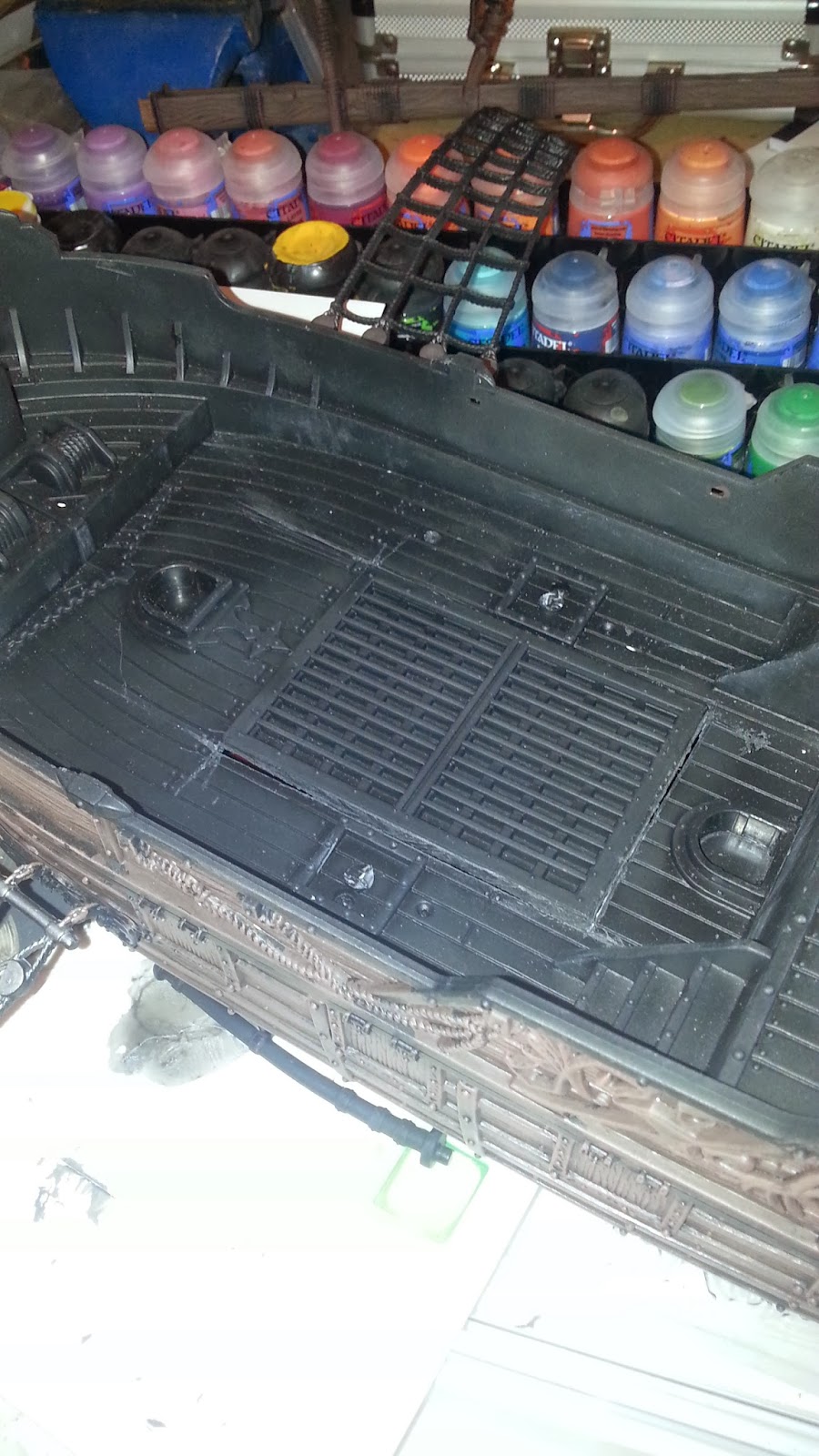 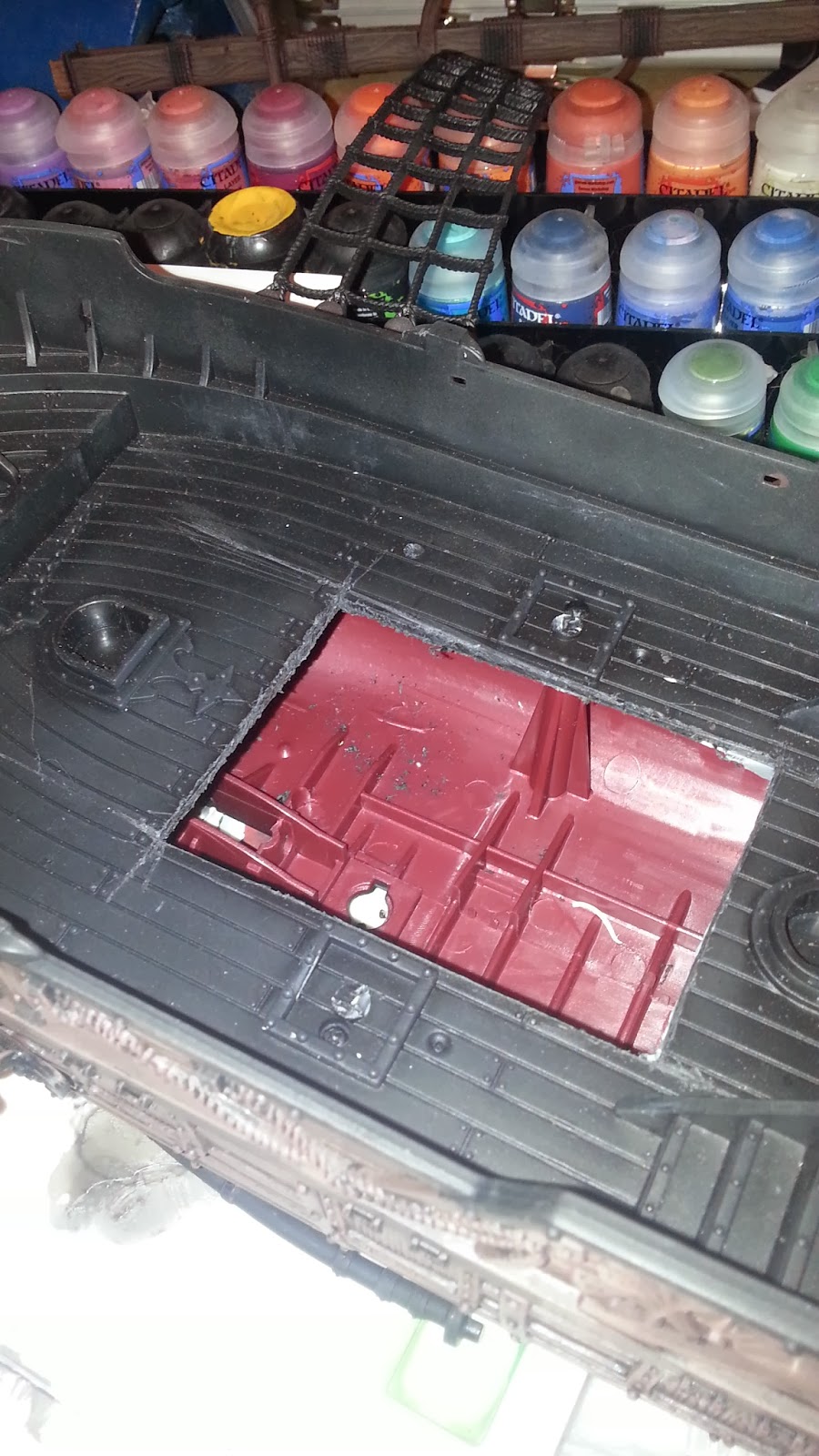 Painting the ship has begun with an initial baseboat of Dryad Bark followed by an agrax earthshade wash and gorthor brown drybrush. I need to brush up on my ship weathering techniques before I move on and finish the wood off. Next stop is the metal detailing along the sides, I'm thinking Gold would be a good color for this? 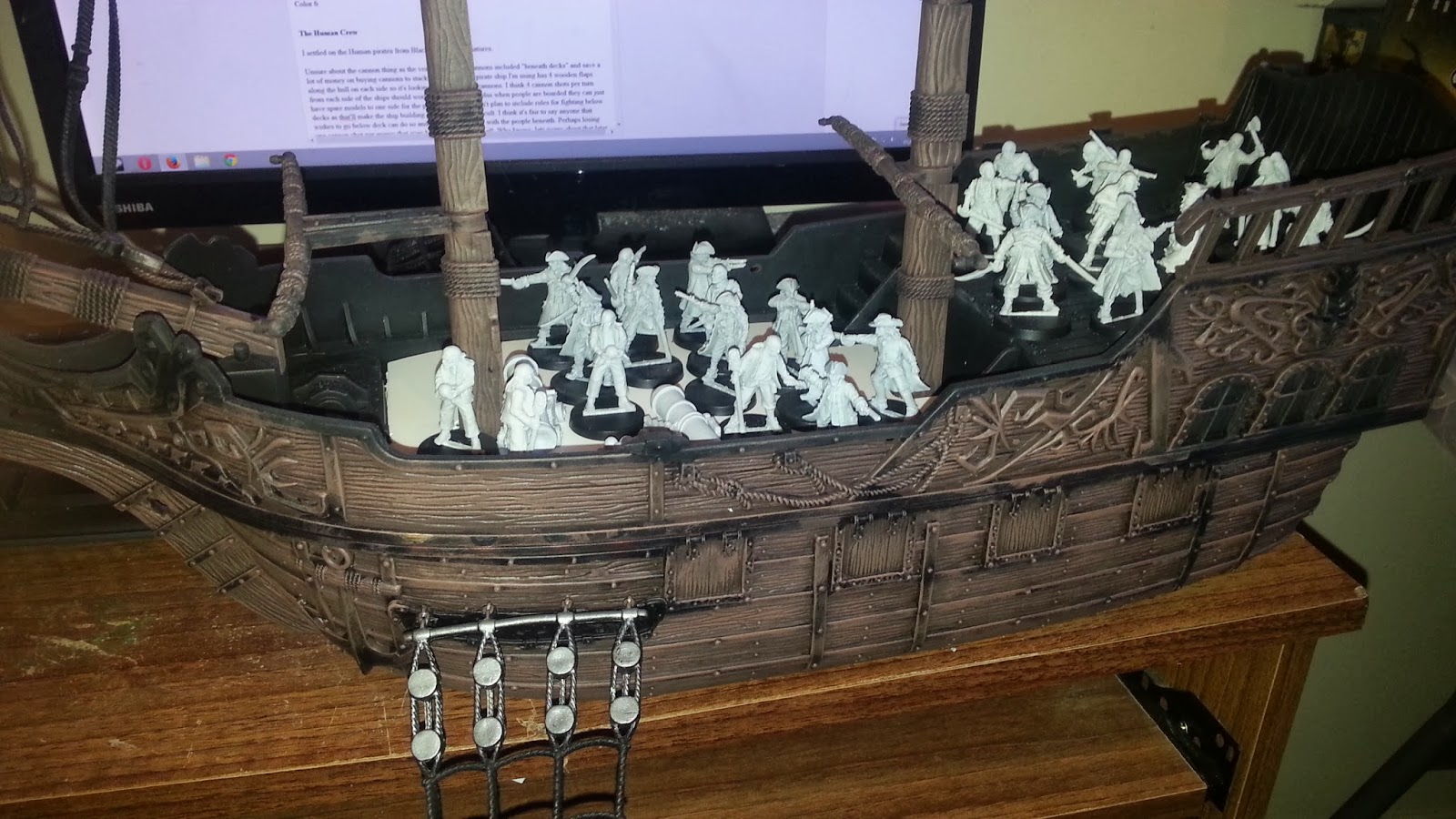 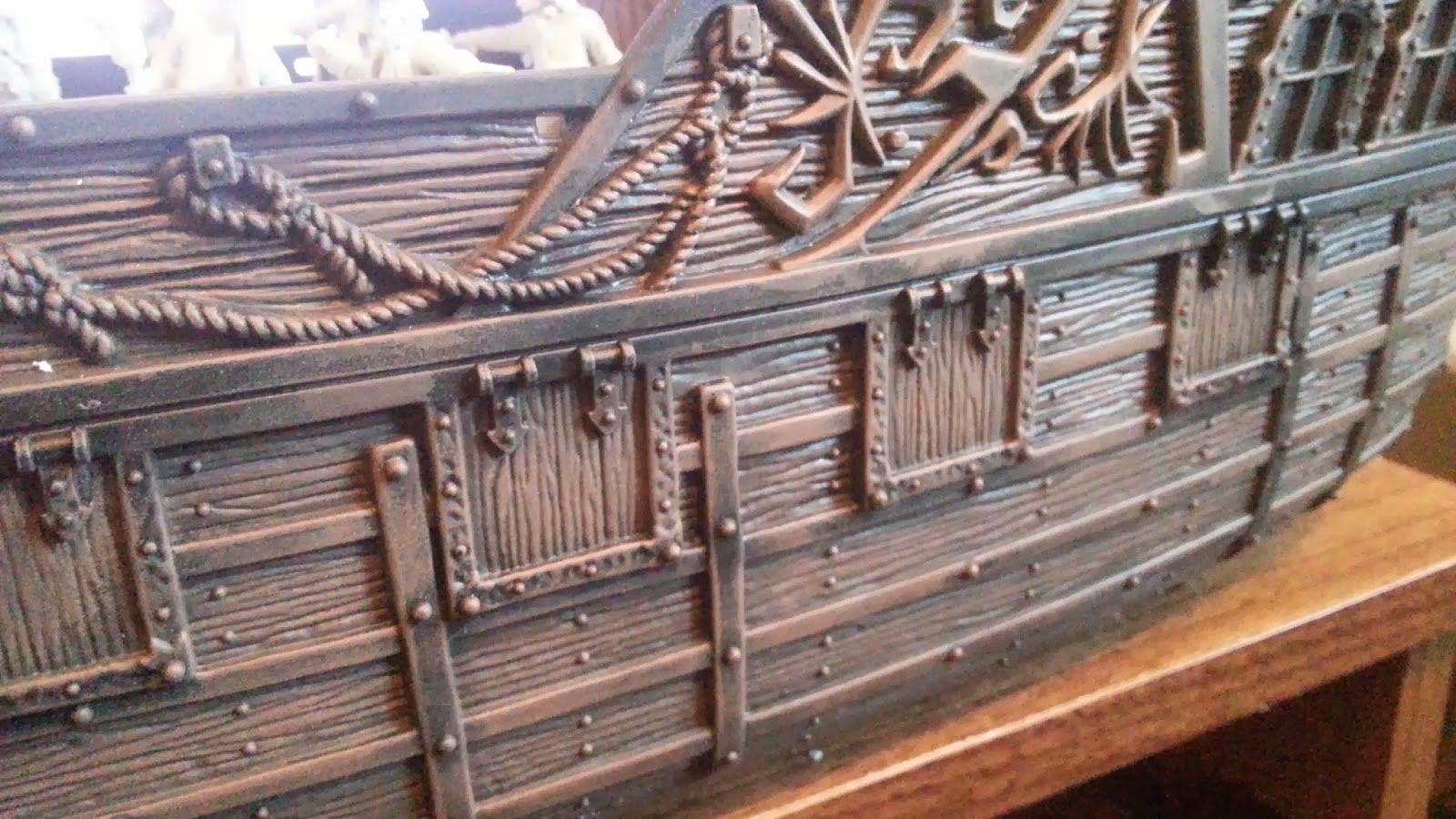 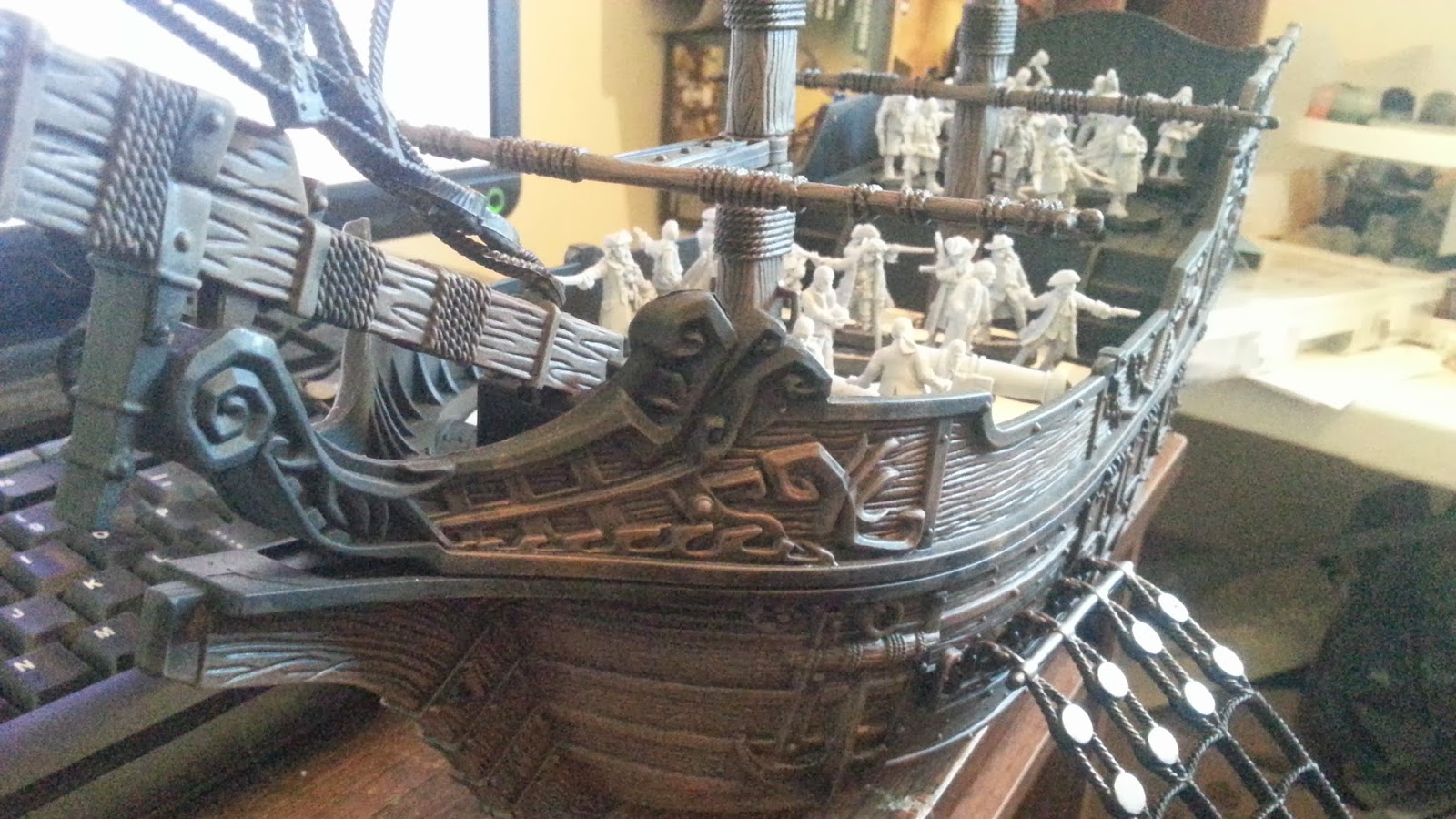 I settled on the Human pirates from Black Scorpion Miniatures. (which you can see in the pictures above and below). I am however pretty unsure about the cannon thing as many ships have cannons included "beneath decks" and save a lot of money on buying cannons to stack on the top. The pirate ship I'm using has 4 wooden flaps along the hull on each side so it's looking like it'll have 8 cannons. I think 4 cannon shots per turn from each side of the ships should work well in the rules, plus when people are boarded they can just have spare models to one side for the people beneath. I don't plan to include rules for fighting below decks as that'll make the ship building process way to difficult. I think it's fair to say anyone that wishes to go below deck can do so and fights close assault with the people beneath. Perhaps losing one cannon shot per enemy that goes below would work well. Who knows, lets worry about that later on a bit.

Anyway, these are the models I've bought and I have to say they are fantastic sculpts, the resin is of a very high quality to.

Something else I found whilst looking around for some inspiration was this ship over on Davecraftshop. This guy has created an absolutely amazing ship which would slot perfectly into our system and presents a really easy blueprint. 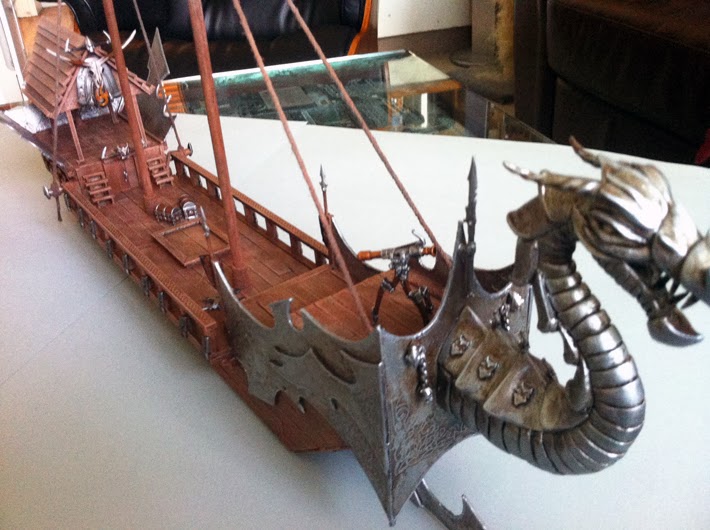 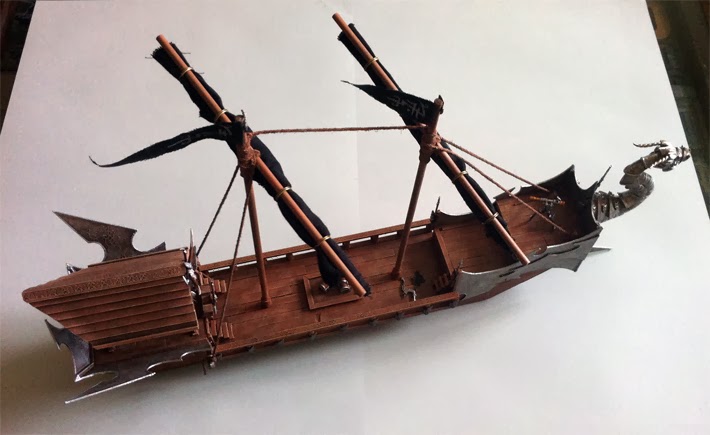 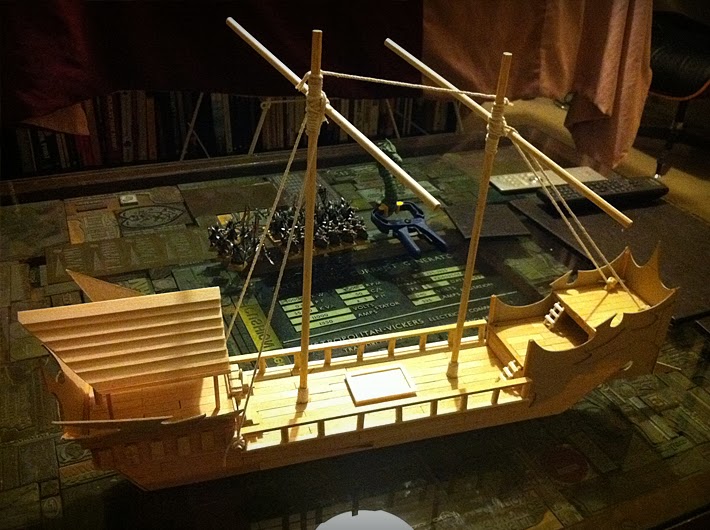 My plan for the next update is to finish the basecoating and balsa additions to the ship and get the pirates undercoated and prepped for painting.