The Auspex: Will we see a 40k Mechanicus army? by Jagged Red Lines 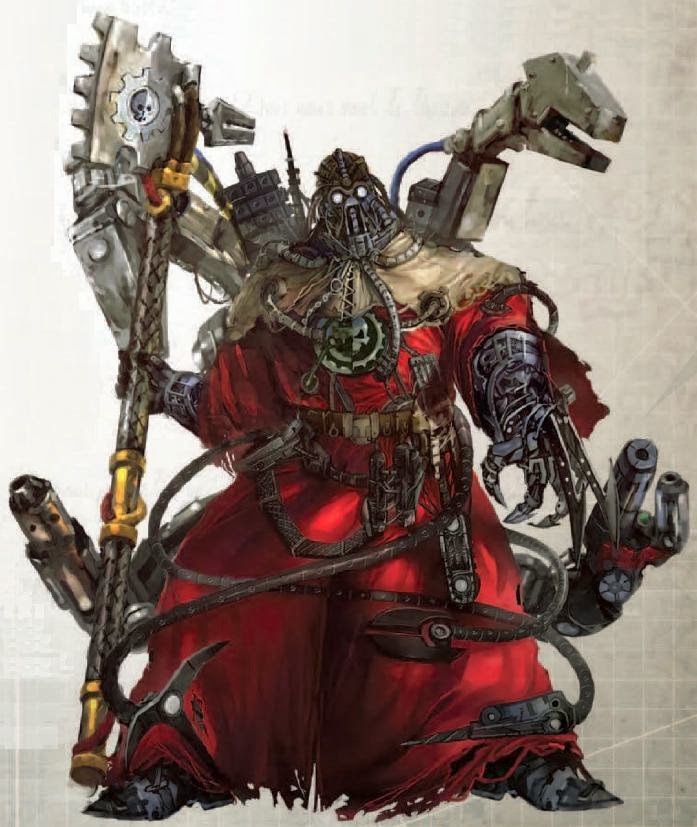 It was around a year ago that we started hearing whispers of something exciting on the horizon. A rumour emerged that was, at the time, so out of the blue that it was almost immediately dismissed as wishlisting.

“I have seen a plastic adeptus mechanicus sprue with servitors and human sized (i.e. not space marine) adepts. This definitely exists because I have seen it, so don't confuse it with my second point, although I don't know where it fits in with the release schedule.”

Perhaps because it was so obscure, Natfka had to write a qualification:


“I have no or very little doubt on this source of information.”


At the time, many were expecting that the sprues in question were for an inquisitor skirmish game rumoured to be released the following month, in September. That was because the rumour source then went on to discuss CAD print outs of “custodes-style models, arco-flaggelants, and ogryn-sized servitors”.

Since then, the rumour has been largely forgotten. Until recently, of course, when 40k Radio dropped a bombshell and told us Imperial Knights were going to be released in March. 40k Radio, now one of the most reliable sources of rumours, told us that Imperial Knights would have a codex, with three army lists: Imperial; Mechanicus; and Freeblade.

We now suspect from White Dwarf that the Freeblade army list from a future codex might be comprised of named knights, perhaps with special rules, which would be able to ally with a wide range of armies. What we don’t know is what the difference will be, if any, between the Mechanicus and Imperial Knight lists.

At the moment, dozens of forums and blogs are filled with commentators asking the same question. Will we see Mechanicus infantry units in the Knight codex? If we take a look at the post from Faeit 212 above, it’s certainly plausible.

The naysayers have been arguing that Mechanicus will be the sole purview of Forge World.

So far Forge World have released rules for the Magos Dominus, Thallax, Myrmidons, Tech Thralls and Castellax. Aside from the Magos, who has heard of any of those units before from the fluff? The army list in the second Horus Heresy book, is Legio Cybernetica, a niche sub-faction of the Mechanicus.

I know that if I was going to make a Mechanicus army list I’d include commonly recognised units like Skitarii, Praetorians, or Protectors. It seems strange to me that Forge World is skirting the meat of the Mechanicus range and instead focusing on a niche sub-faction.

Could it be that Forge World is leaving a core, as-yet-unreleased Mechanicus range to Citadel to release in plastic? Could that be what the Faeit 212 rumour source saw on the sprues?

Incidentally, could the “ogryn-sized servitors” which the source mentioned above refer to the rumoured, up-armoured ‘Bullgryns’ which 40k Radio mentioned is coming for Imperial Guard?

Whatever happens, March is shaping up to be an interesting month. If you ask me, I think a few surprises are around the corner.