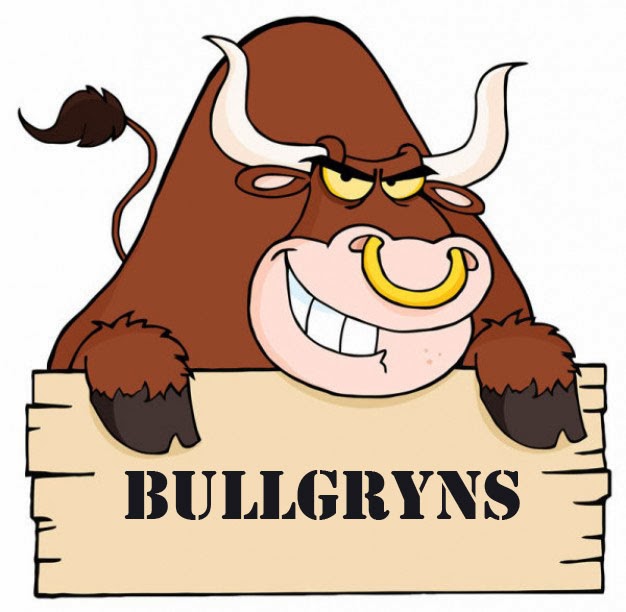 Aside from the ridiculously named "Bullgryn" revelations its been a really quiet few days. The Dwarf steam train continues to rumble on with a whole lot of awesome images being leaked into the community from various sources.


Please tell me they didn't call them Bullgryns... That has to be the most stoopid name ever right?

via a reader that must stay anonymous on Faeit 212


Hello Natfka, I am not normally a rumour guy.

However, I have today seen (and held) something I was not supposed to.
"Astra Militarium Bullgryns"

Shrink wrapped box ready for sale; I don't know what that implys about
release time.

Three Plastic "Bullgryns" which seem to be armoured Ogryns with large
riot style shields. Looked to be on the same bases as the Space Marine
Centurians. They are painted in a new looking blue/gray urban cammo.
They have armoured looking torsos and loin cloth type things made out
of tank tracks (!). They also seemed to have cybernetic enchancement
(ala Boneheads).

Looking at the back of the box, there was a small picture indicating
they could also be built as traditional Ogryns, which retain there
T-shirts and Ripper guns look. The Orgryn on the back had a Green T
shirt.

One of the cronies from 40k Radio has also confirmed this

via Rik on 40k Radio


So some exciting news. A listener of ours was at a GW store today that mistakenly received a shipment of some unreleased items. It was the plastic Ogryn kit. The rename is confirmed as they were called Militarum Auxillia. Boom! Nailed it.
-Rik


Dwarven Rules:
Ancestral Grudge - hatred Skaven/Greenskins; everyone else has a chart.
Dwarf Made - Re rolls
Resolute - +1 Strength on the charge
Relentless - no leadership for marching close to an enemy
Shieldwall - +1 parry when charged
Warriors: Stayed the same but with the new rules above.
Thunders/Quarrlers: +1 point, with new rules above and heavy armor
Longbeards: new rules above + old longbeard rules, +1 point, no longer 1 unit for every unit of warriors.
Hammers: don't remember points but looked the same; if general is present in unit, any, ANY model can accept a challenge.
Iron Breakers: pretty much the same, +1 parry bonus always!, stacks with Shieldwall rule, so 4+ ward save if charged!
Gyrobomber thing: in movement phase can drop bombs (place large blast, scatter, if it still hits a unit it passed over then resolve wounds, scatter from the center hole again with a small blast as bomb bounces).  In the shooting phase it can shoot its cannon.
New Unit (Rare): Good stat line, Irondrakes (I think that was the name), handheld flame cannon (str5, 18", armor piercing, dwarf made, flaming attacks, ), they also have armor gromil-proven armor (I think) that gives 4+/6+ward/2+ward vs. flaming attacks.
Added characters: (2) seen in white dwarf weekly, Ungrim Slayer-King, Joseph Bugman, High King Thorgrim, don't remember if Thorek is in there.
So a bit of an update.  These are torn from the pages of the book that is due February 15th.  I cannot post the images to keep my source safe, Natfka safe, etc.
No plastic slayers.  This doesn't mean they aren't coming (because we don't have finecast versions and still metal) in plastic; just means that at the time of the books production they were not ready or painted.  We have seen this before.

via a reader here on Faeit 212

Master of accuracy roll on 2+ choose unit within 3". Doesn't affect himself but can still fire I guess.
Effects 1
Master of ballistics from empire eng but can effect cannonball bounce and flame can burst.
2. Increase range of and handguns by 2d6

Regular axe (str 6 base on him though) with arm pierce and if you hit with an attack on a 5+ you can destroy a magic weapon on them.

Doesn't have arm but I assume like the other guy they only posted some rules.

In remaining moves can drop a bomb if no fleeing or having charged. Select one in engaged unit you moved over, place large blast over it, scatter it like stone thrower it's s 3 (6) arm pierce multiple wounds d3. After resolved on a 4+ the bomb scatters d6 and uses a small blast. Can't happen a third time. If you misfire you use this chart.
1. Suffer s6 multiple wound d3
2-3. Center 3 inch on bomber then scatter it no bouncing.
4-6 only model under hole is hit, suffers str 4 hit

Also has a standard gun with multiple shot 4 dwarf crafted quick to fire.

The following are leaked white dwarf weekly pictures from http://plastickrak.blogspot.com/ 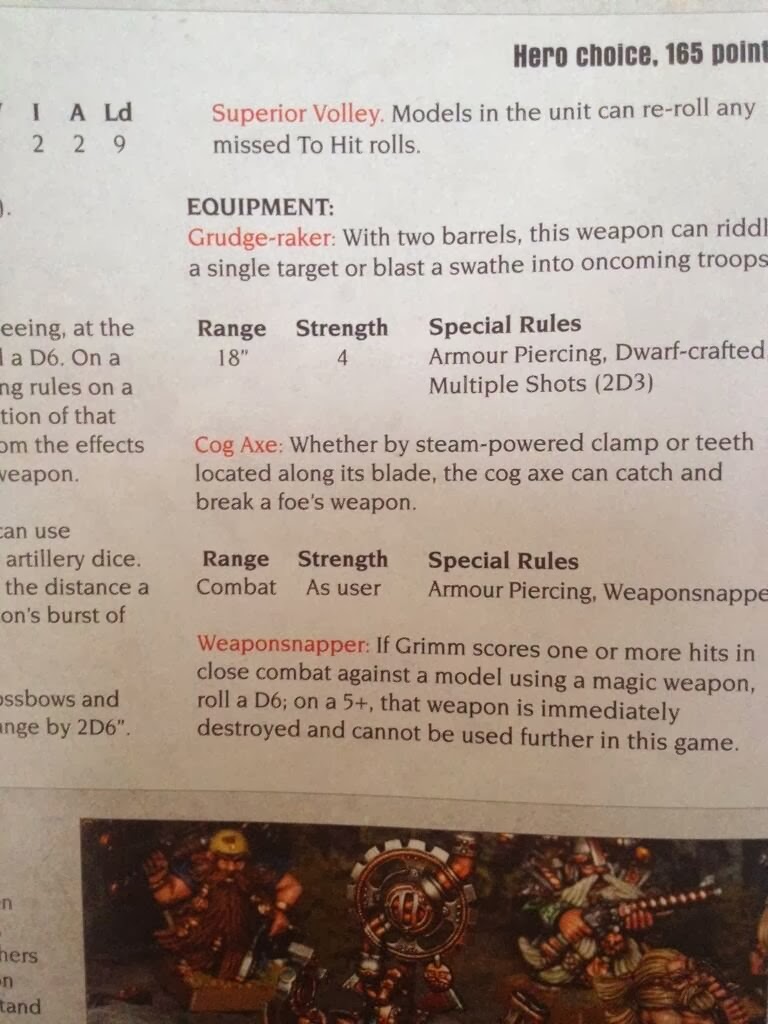 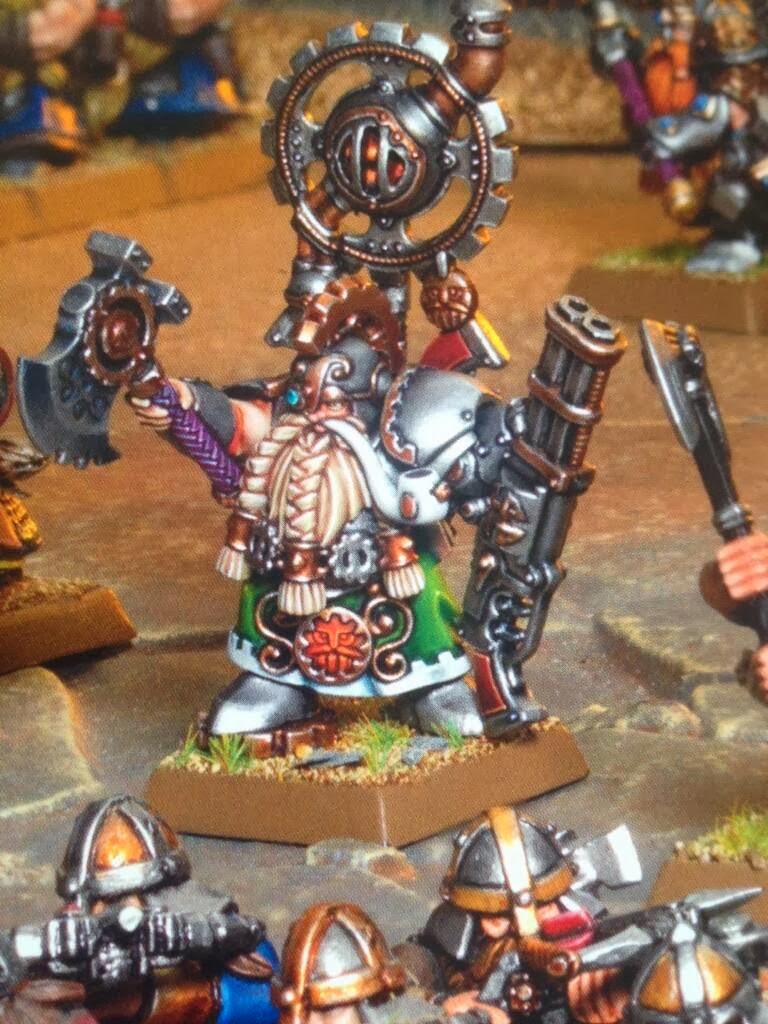 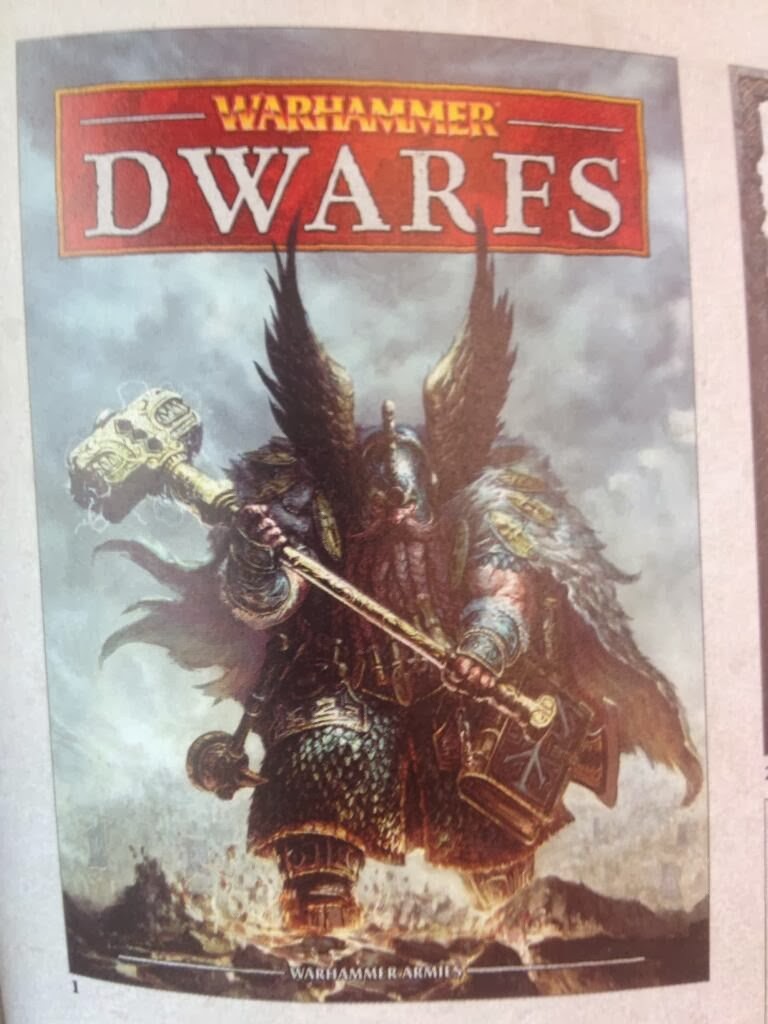 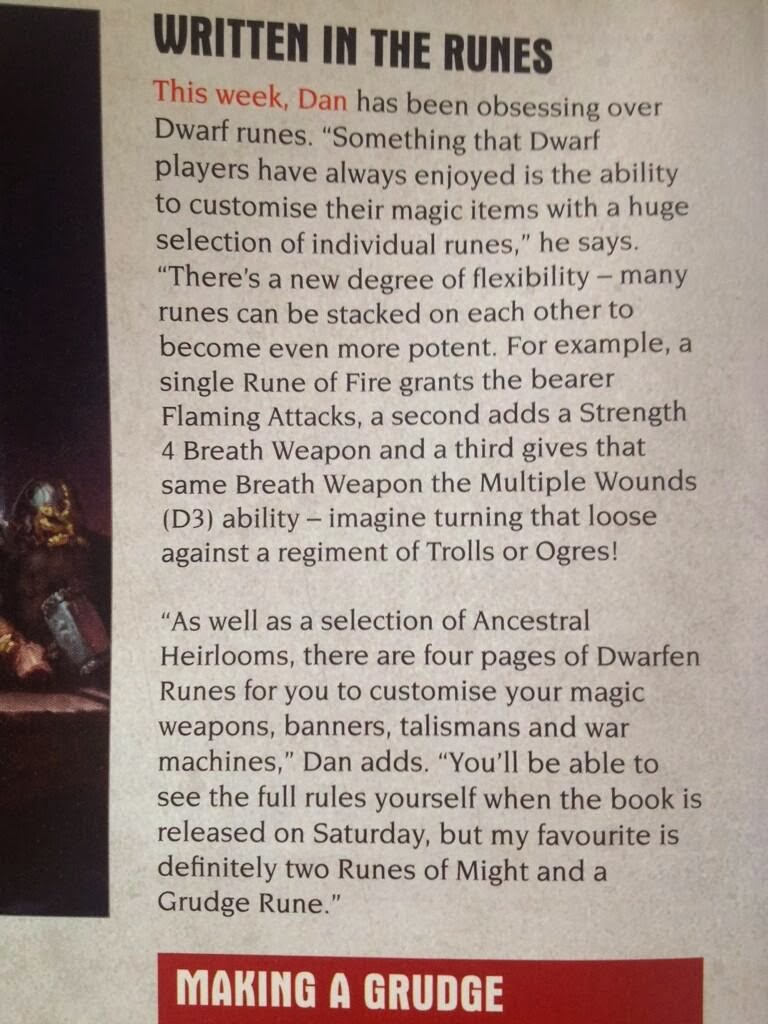 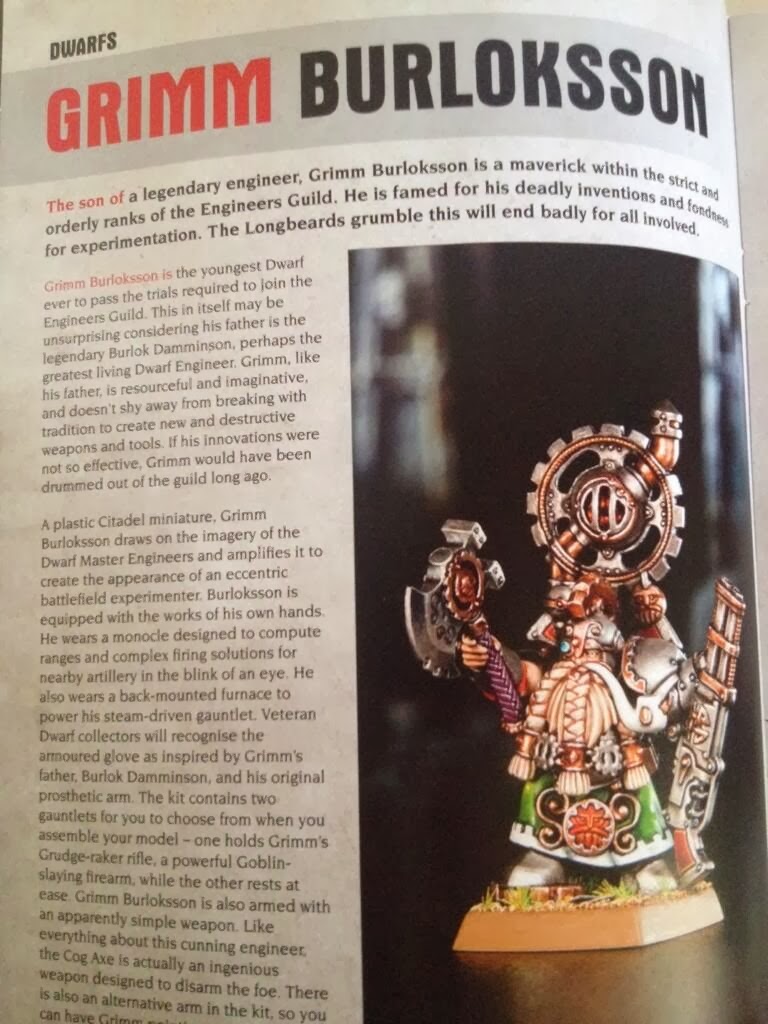 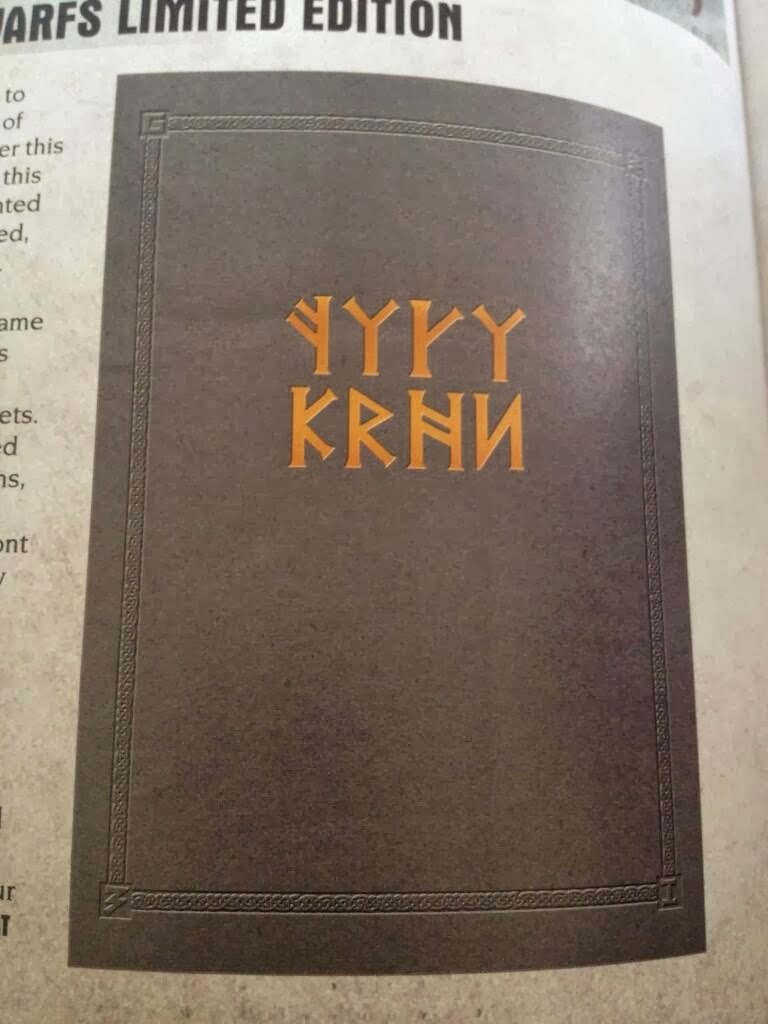 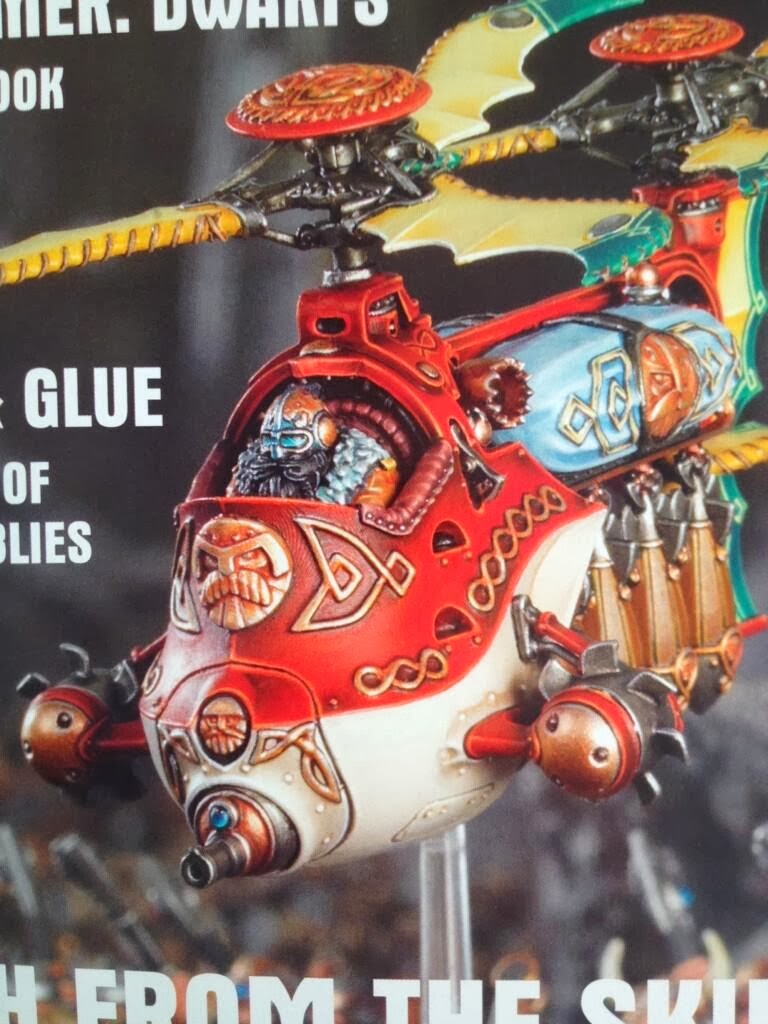 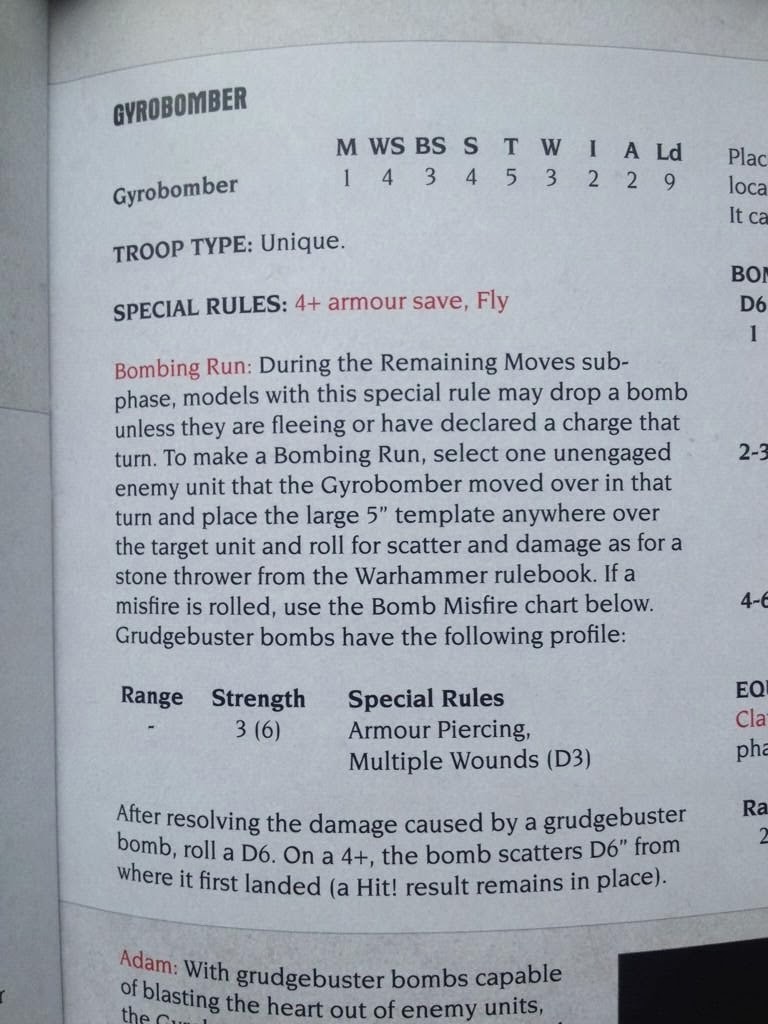 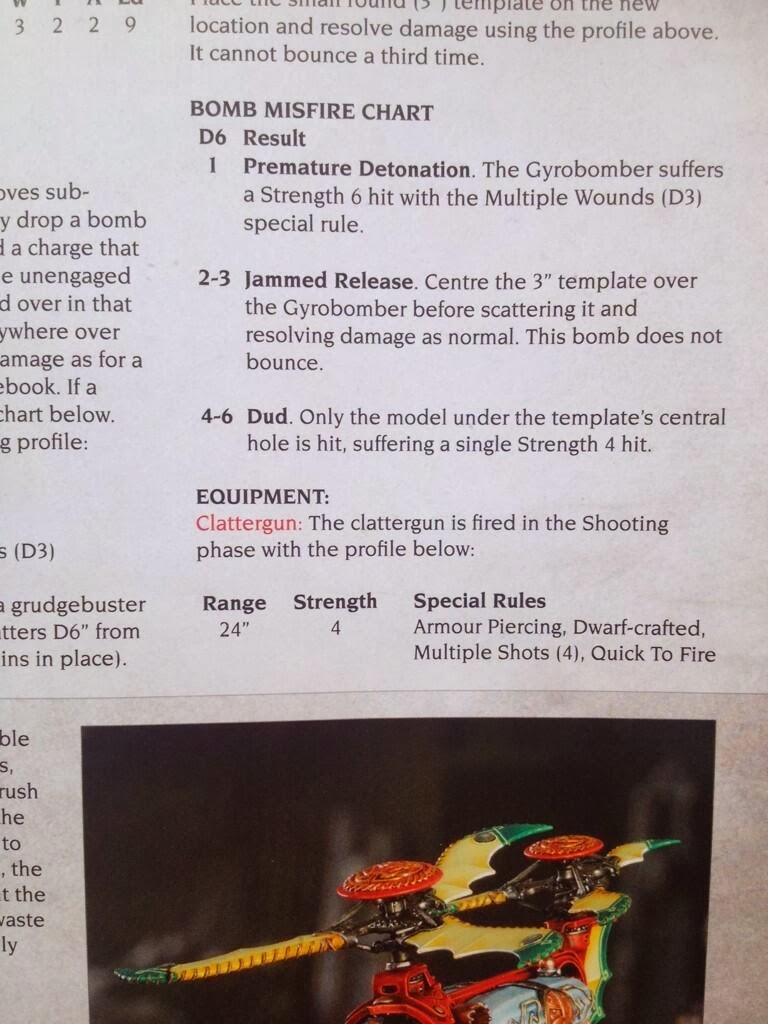 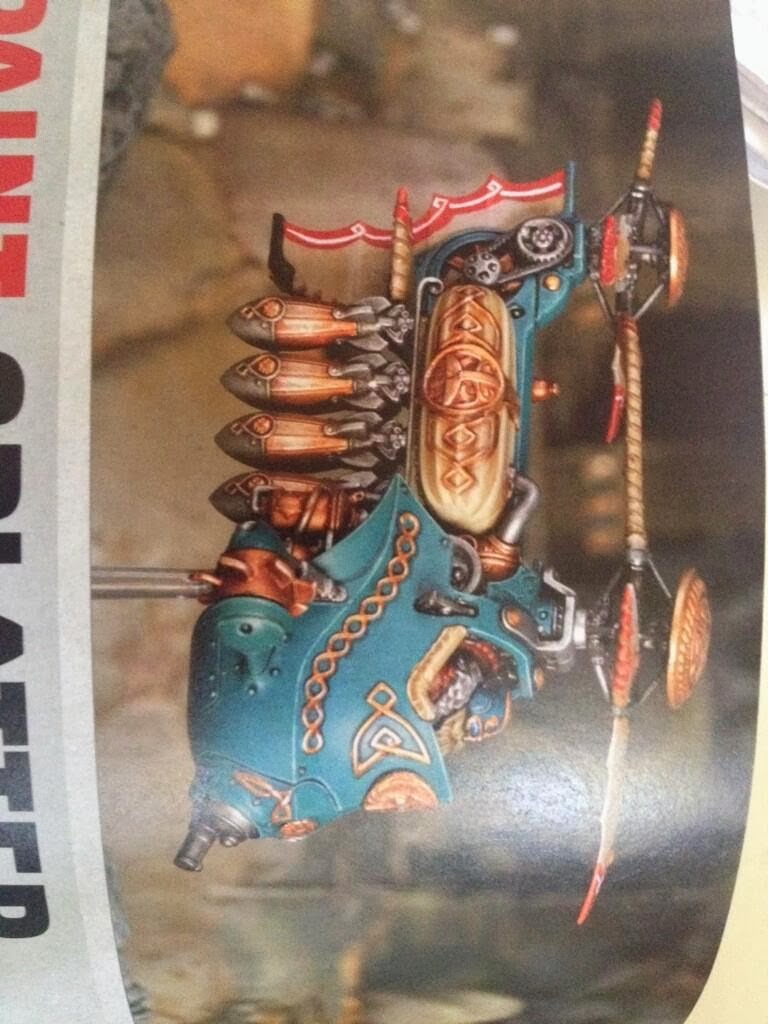 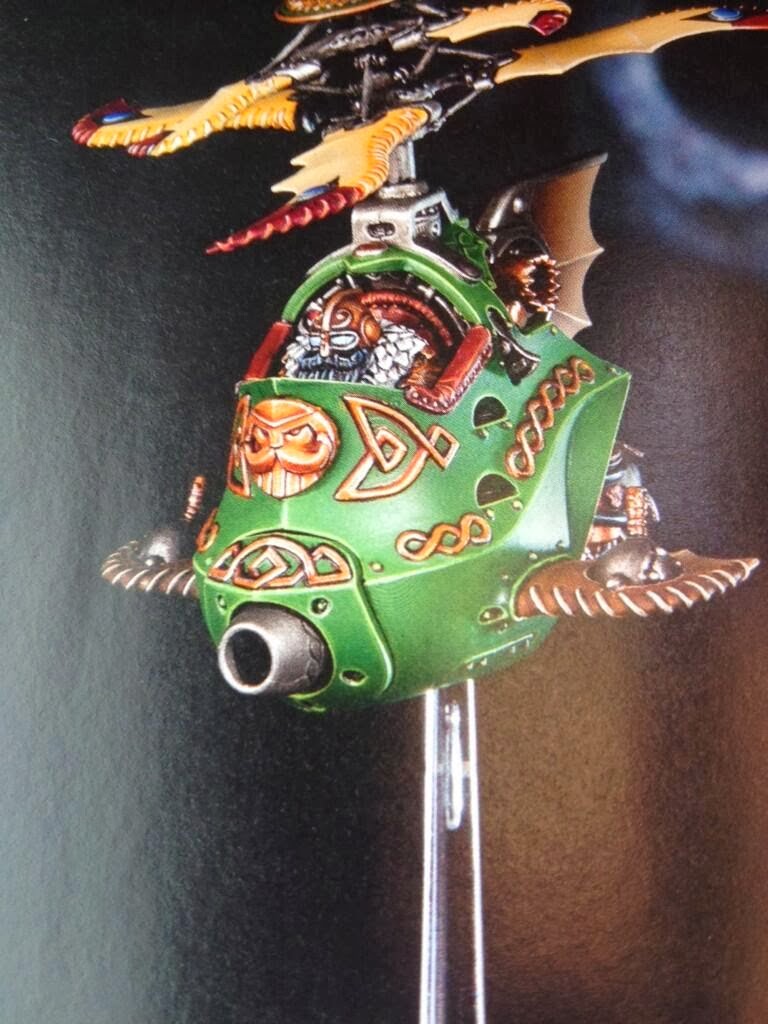 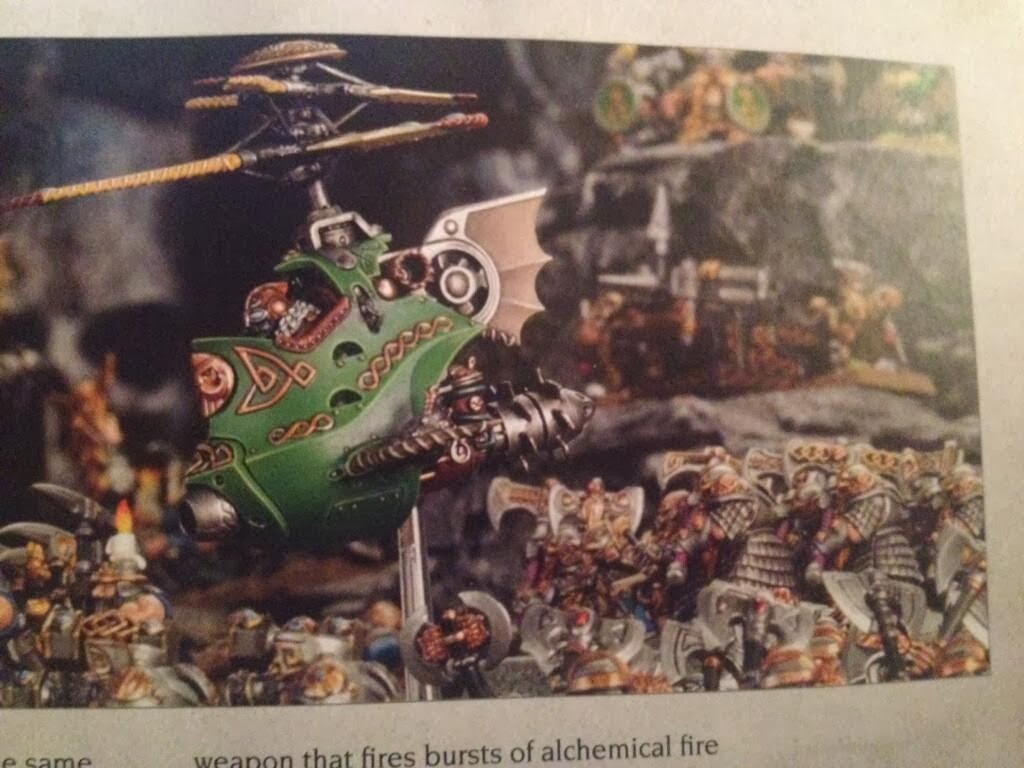 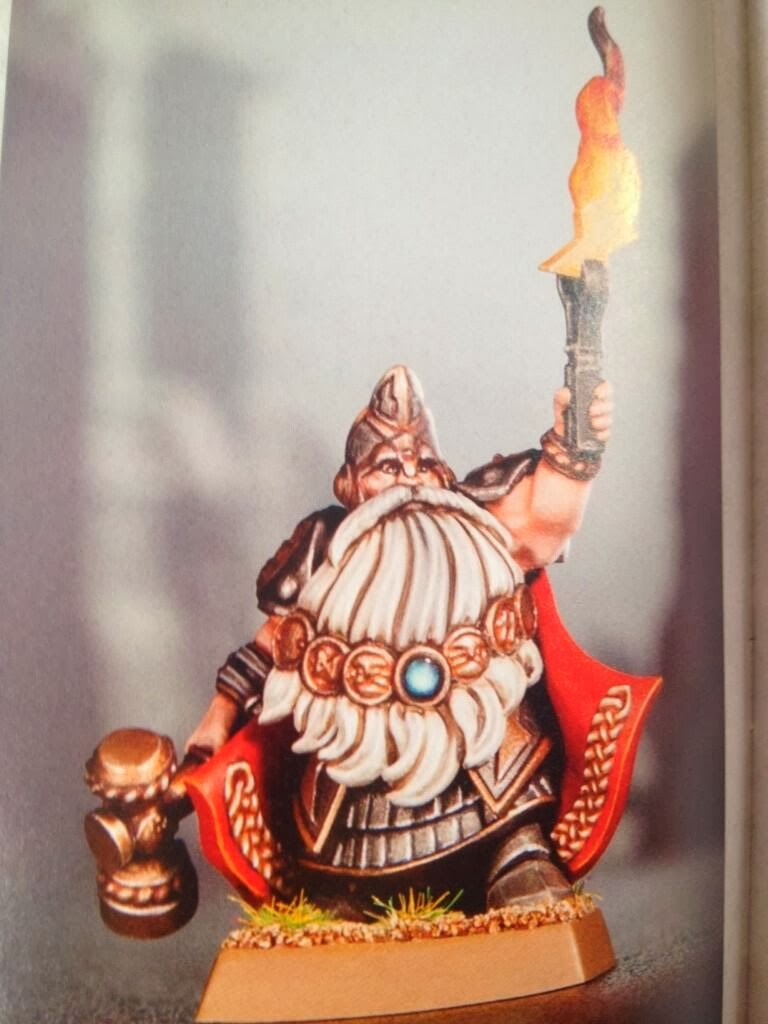 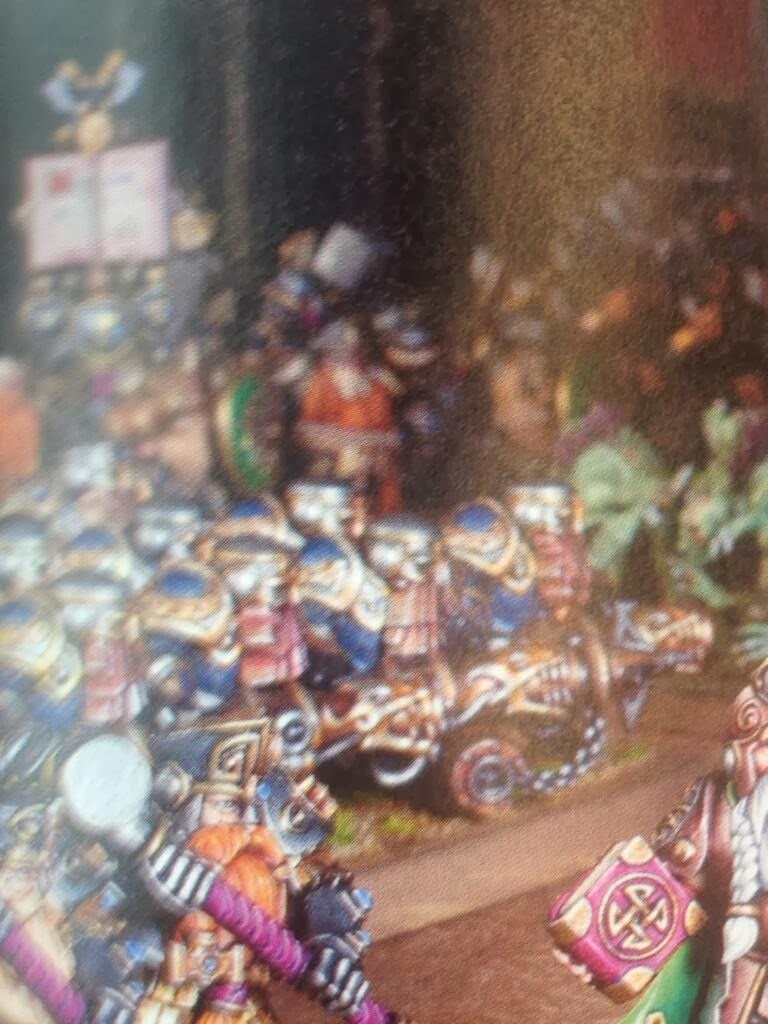 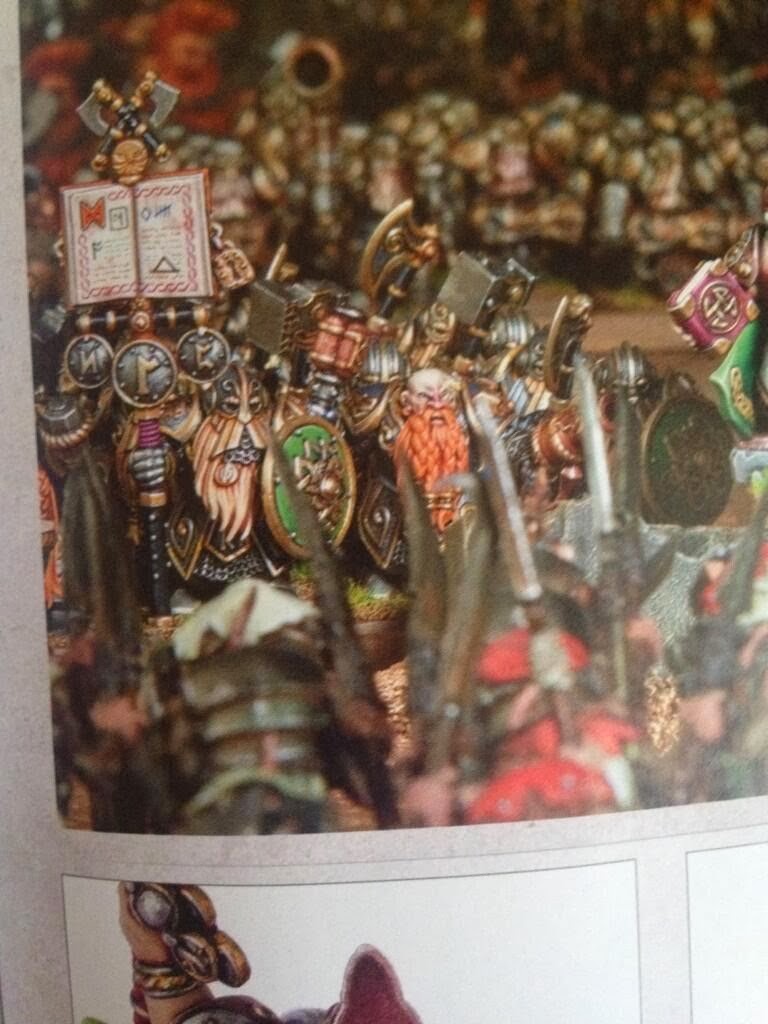 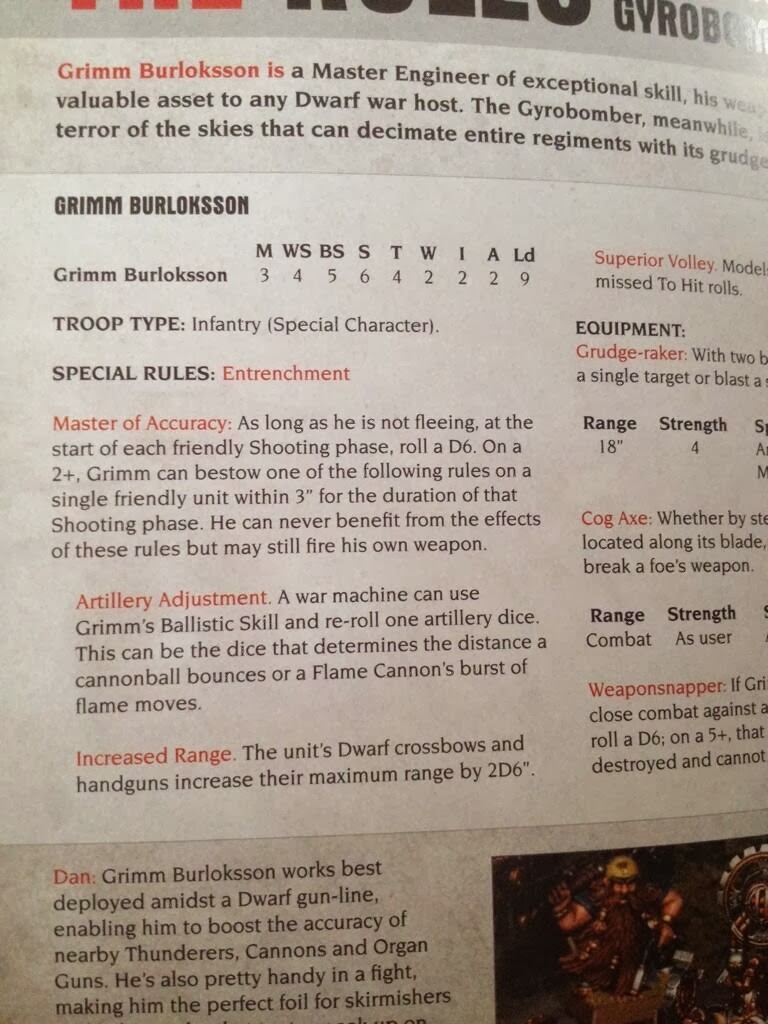 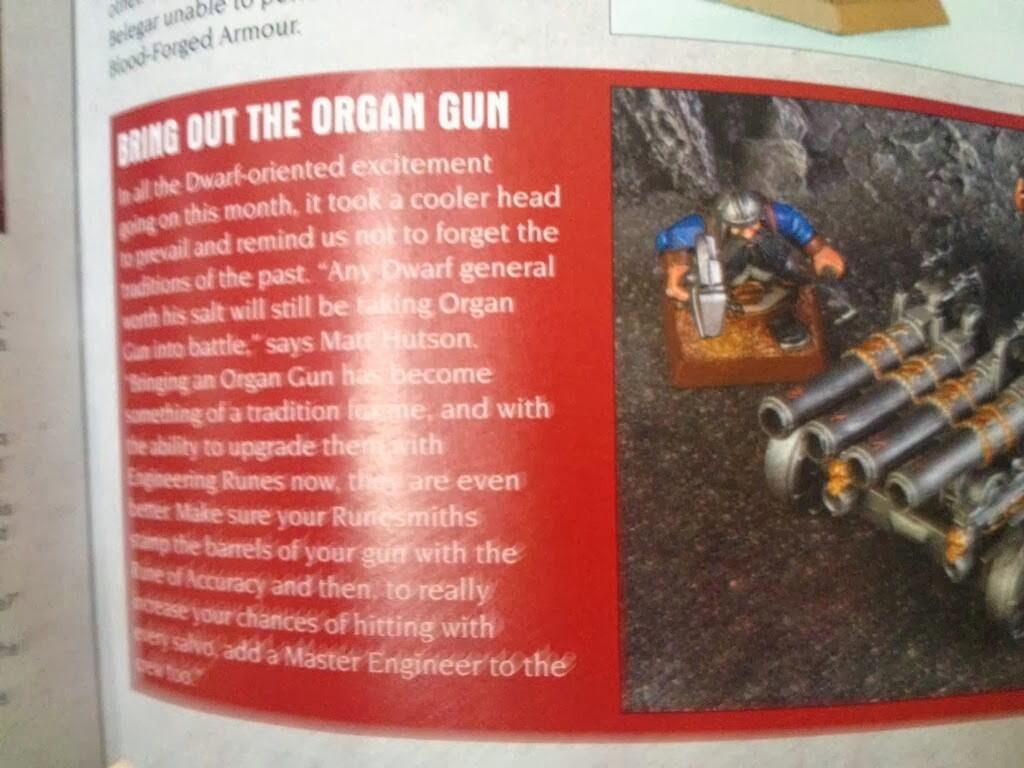 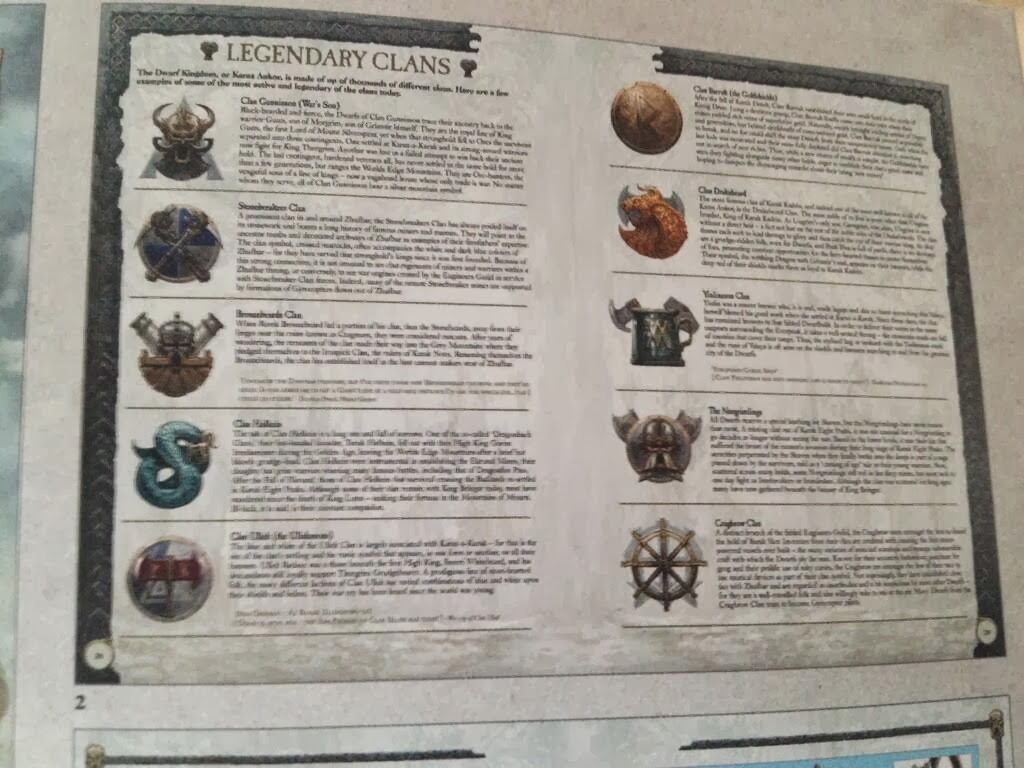 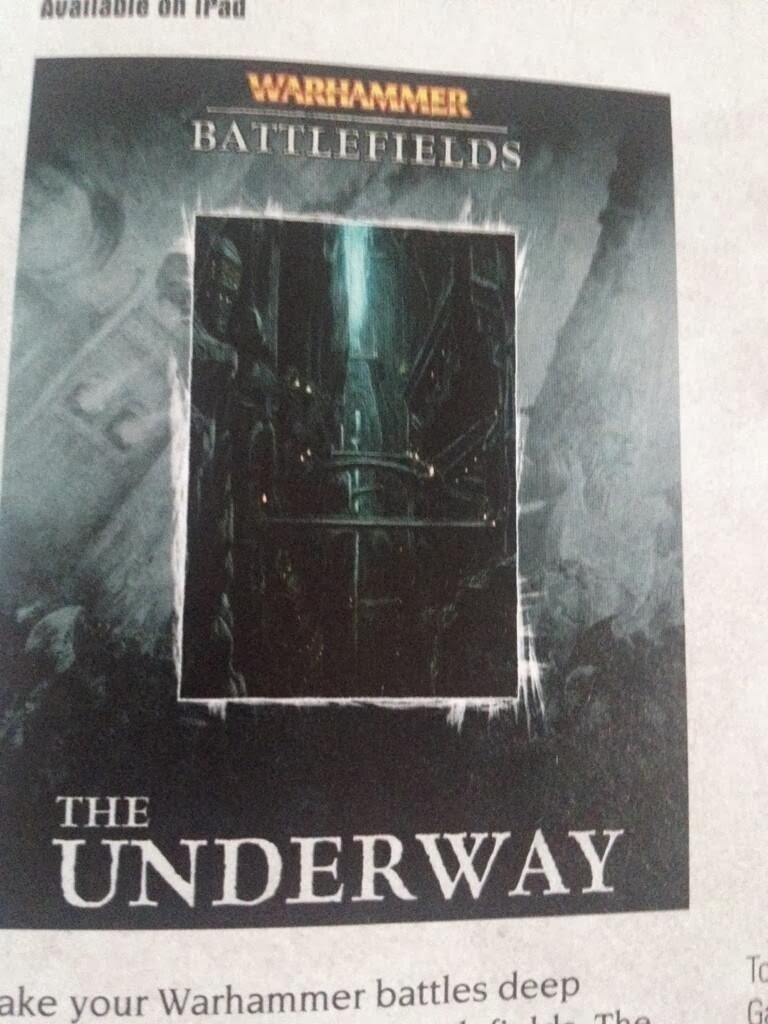